He had one of the most epic starts in Red Bull Rampage history. That jump raised a ton of reactions ranging from "unbelievable" to "you should not share this ridiculous content!". All the more reason for us to ask Tom 10 questions, starting with his amazing start in the finals of Red Bull Rampage 2017 edition.

It's hard to believe anyone missed it, but here's the jump everyone is still talking about...


1. How did you come up with the idea for this epic jump start?

I’ve been thinking about it since I first saw this drop last year. I love doing cave man’s and doing it at the top of a rampage line would be a dream.


2. When did you come up with the idea, just that week?

I had the idea ever since I saw the drop last year. But it was too windy and seemed too risky. I thought this would put me in a podium position so I went for it.


3. Did you doubt yourself when you were standing there at the top?

No I didn’t, I was super confident because there was no wind. The thought of crashing wasn’t in my head at the time. I knew i could pull it off. 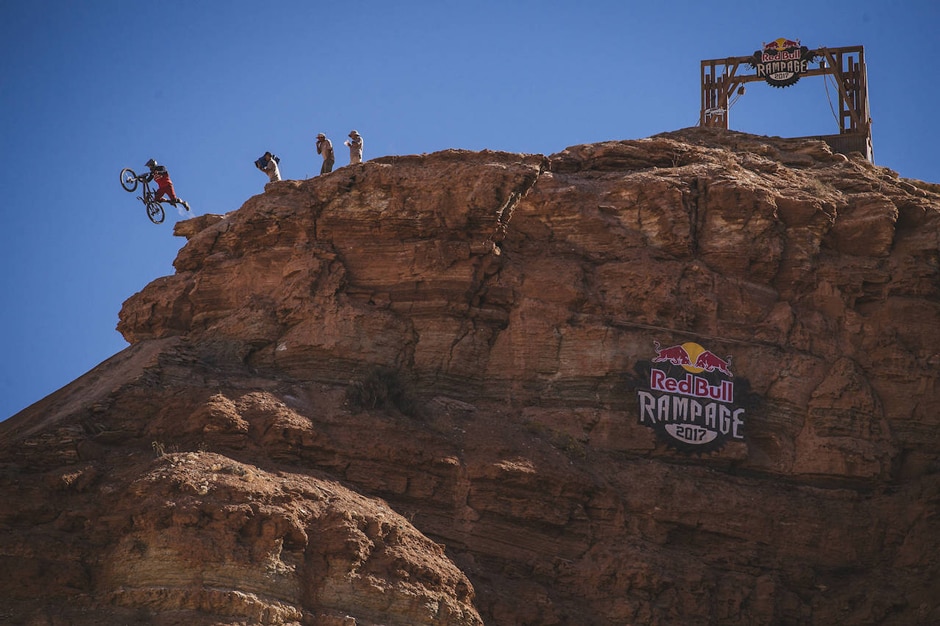 It was a little bit bigger than the drop everyone else was hitting. I’d say somewhere around 15 ft.


5. Can you walk us through the days of Rampage?

The first day was the hardest by far. I wanted to find a big drop somewhere and I couldn’t seem to find one that lined up. But on day two we committed to staying on the same line as last year and ended up finding a 35ft drop. So that worked out great! We spent most of our time building this drop and improving my line from last year. I was lucky enough to get three full days of practice in and tweak the jumps and drops on my line. I felt really good the whole time in practice until the very last session before finals. I hurt my shoulder and had a few crashes. But I managed to pull it together for finals. 
6. How did you prepare for the event?

I’ve been training at my friend’s house. He has a big foam pit and air bag for his dirt bike. And I learned flat drop back flips into his foam pit with Cam Zink. Other than that, I rode with Kurt Sorge in Nelson. And rode with Brandon Semenuk in Kamloops. And made sure I was well rested going into Rampage.


7. What part was the most challenging?

Most challenging part was learning flat drop flips. I wanted to do one before I went to Utah but never got the chance to. I’m glad I just did it in my run though. It’s a bit risky.


8. What's the impact of the components you ride with?

Components have a big impact on your riding. If you don’t have the right parts, you will not perform well. Or you’ll break them and hurt yourself. Having the right components on your bike is what makes you ride with confidence and it will make you perform better. There are a lot of people that I now compete with that still inspire me. I used to be the kid just watching the free ride mountain bike movies and wishing it was me. Now i get to compete with those same guys. I have to say Zink, Semenuk and Lacondeguy are probably my favorite riders and they inspire me the most.

Well… there is a movie coming out in the spring called “North of Nightfall”. It’s going to be amazing, I’m lucky enough to be one of the four riders featured in it. Other than that, I want to push my own limits and the limits of what can be done on a bike. And I guess you’ll have to wait and see where that takes me!

Check out some favorite 2017 Red Bull Rampage photos here or, in the video below, watch Tom and his family at their home in Kelowna, British Columbia. His back yard is every mountain biker’s dream...