It might have been virtual and lacking the cobbles, frites and beer of the iconic Belgian classic, but Flanders Classics’ virtual Tour of Flanders on the BKool virtual platform was hotly contested with each rider producing extraordinary power over the 32km race.

It might have been virtual and lacking the cobbles, frites and beer of the iconic Belgian classic, but Flanders Classics’ virtual Tour of Flanders on the BKool virtual platform was hotly contested with each rider producing extraordinary power over the 32km race. Many of the riders were using the DURA-ACE R9100-P power meter so we’ve taken a look at their power profiles to see how the race unfolded.

Nobody could have predicted the result, let alone that this year’s race would be virtual, conducted on indoor trainers and streamed live on YouTube with cameras showing each rider pedaling away at home.

Corona virus has hugely impacted the professional cycling calendar with all races postponed until the pandemic is under control. As an alternative, the Tour of Flanders organisers arranged for a group of 13 professional cyclists, including last year’s winner Alberto Bettiol, to compete over the final 32km of the course in Bkool’s virtual recreation of the Tour of Flanders route.

The route included the Kruisberg, Oude Kwarement and Paterberg. This compact race might have lacked the war of attrition of the real race, but what it lacked in distance it more than made up for with impressive power outputs in the short but very intense race. No gaps were easily given and every second was fought over.

After some exciting racing with Remco Evenepoel (Deceuninck – Quick-Step) and reigning champion Alberto Bettiol (EF Pro Cycling) being active early on, Greg Van Avermaet made a decisive move on the Paterberg with just 10km remaining and held off chasers Oliver Naesen and Nicolas Roche to cross the finish line victorious. Anyone hoping for a victory celebration would be disappointed, he looked far too exhausted to raise his arms! If anyone thinks virtual racing isn’t tough they just need to look at some of the power the pros were putting out on their indoor trainers. With most riders using the DURA-ACE R9100-P power meter, we can reveal an insight into the sort of performance that was required to compete in this legendary race.

The race lasted just over 43 minutes, much shorter than the usual six hours of racing on the 267km course. Winner Greg Van Avermaet averaged a mighty 434 watts which, for the 74kg rider, means 5.86 W/kg. This despite being dropped at the very start of the race.

The Paterberg is one of the steeper climbs on the route, and the final sting in the tail before the flat 10km dash to the finish line. While the virtual race lacked the energy-sapping cobbles, the 12.9% average and 20% maximum gradients made sure the riders had to dig deep. Greg surged ahead on this climb by constantly producing over 500 watts for the majority of the climb, an acceleration that nobody could match.

Only Oliver Naesen and Nicolas Roche were able to keep within any sort of distance but the gap quickly stretched out to over 20 seconds. Nicholas Roche wasn’t able to close the gap to Greg or fend off Oliver in the final sprint, but it wasn’t for the lack of trying as an examination of his power data shows.

In his effort to close the gap to Van Avermaet, Nicolas Roche produced a peak power on the Paterberg of 678 watts. Meanwhile, in the final sprint, he would push out 756 watts. Averaged throughout the race his power output was 385 watts.

A favourite going into the race, Wout van Aert wasn’t able to be a contender in the final move but his power data shows it wasn’t for a lack of trying. His normalised power was 533 watts throughout the race, with a peak of 563 watts and a max heart rate of 192 bpm, close to the 25 year old’s HR limit. His 6.64 W/kg is a real measure of his superb fitness. 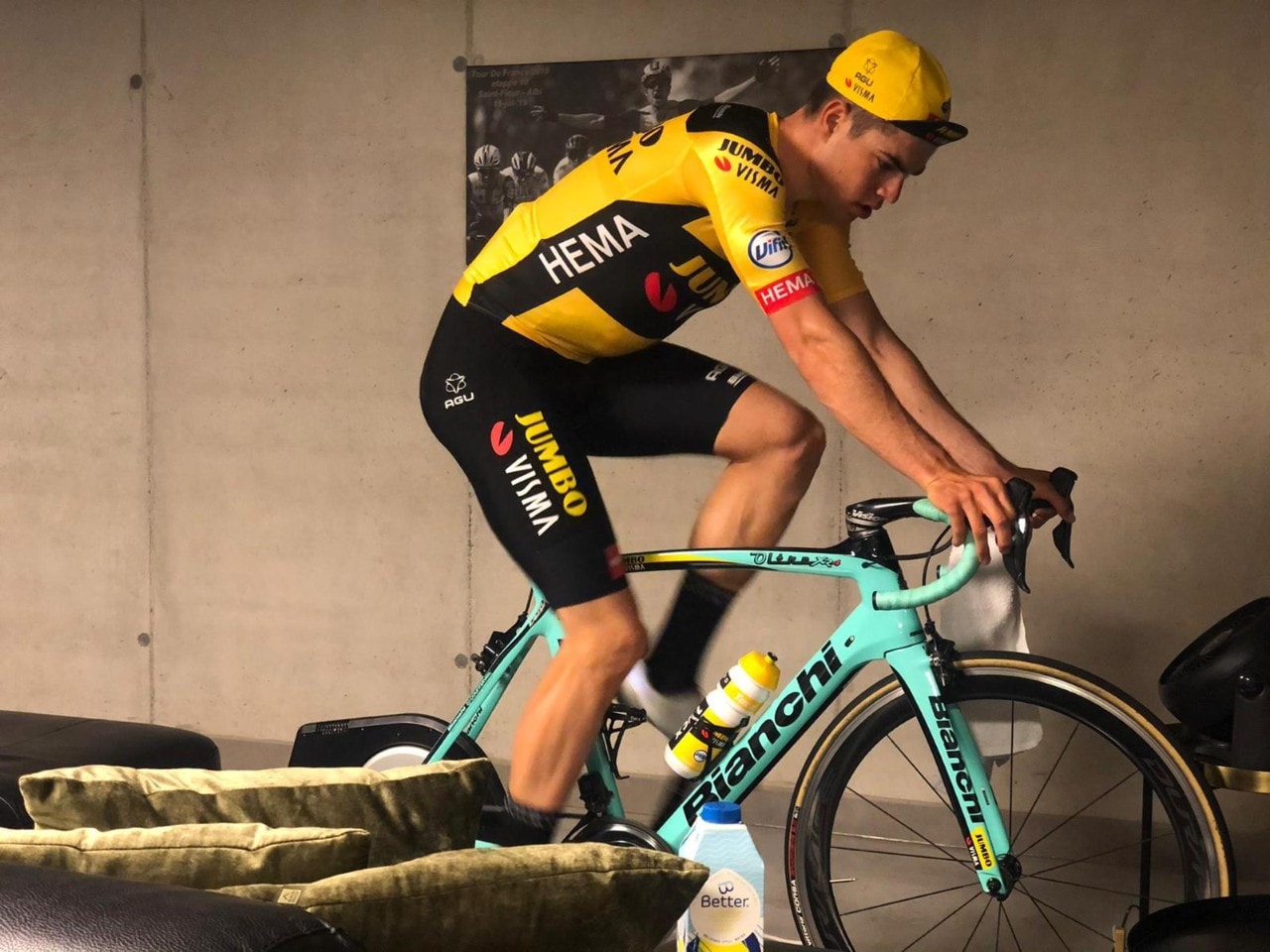 Australian Michael Matthews failed to finish the virtual race due to a technical problem (where's the support car when you need it?), but his power file tells how tough the racing was up until he dropped out. His average heart rate was 173 bpm peaking to 188 bpm, with an average power output of 368 watts and a maximum of 583 watts.

Mike Teunissen (Team JumboVisma) is another rider who produced an astonishing average power. He produced 528 watts average over the race. His peak power was 771 watts with a normalised power of 526 watts, and 7.14 W/kg. Try that at home! 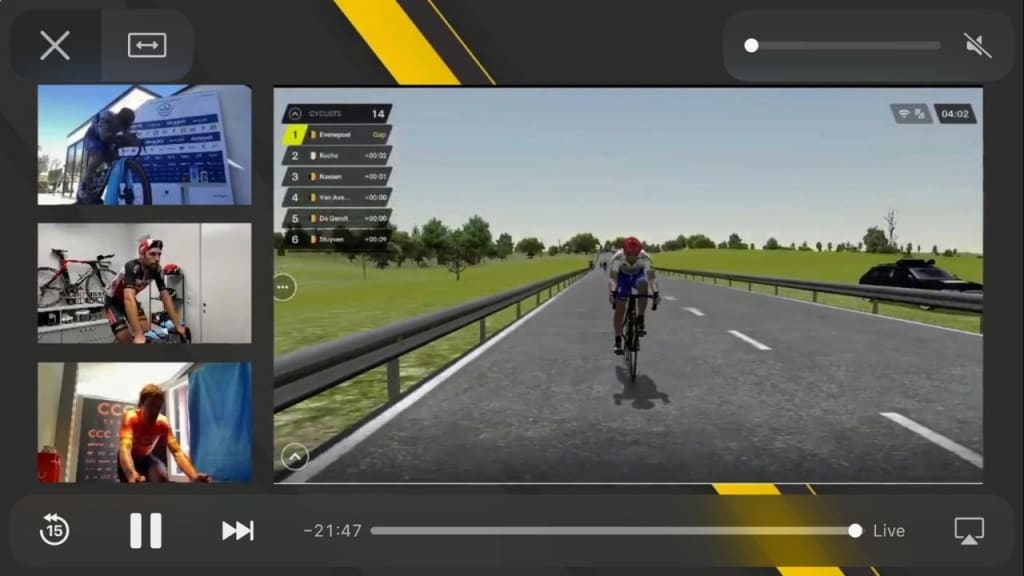 “As presumed, it was a very tough race,” the 27-year-old commented after the race. “In here it is mainly a matter of delivering a lot of power and pedaling high wattages. That is something that doesn’t suit me too well compared to the pure specialists. In any case, it was a nice change for us.”

Race winner Greg Van Avermaet has the final word on the matter:

“I just tried to do as good as possible,” commented Greg straight after race, still visibly tired from the effort. “I don’t like to ride inside anyway, and we are lucky in Belgium to still be able to ride outside. I had no idea how this would work, it’s the first time, you don’t know what to expect, but it was really hard and especially from the start. I was dropped one time, luckily I could make it back.

Whilst this is quite different to racing outside we’re sure you’ll agree it is better than no racing, and judging by the data from their power meters, it’s clear the riders put in a very real effort despite the virtual setting. 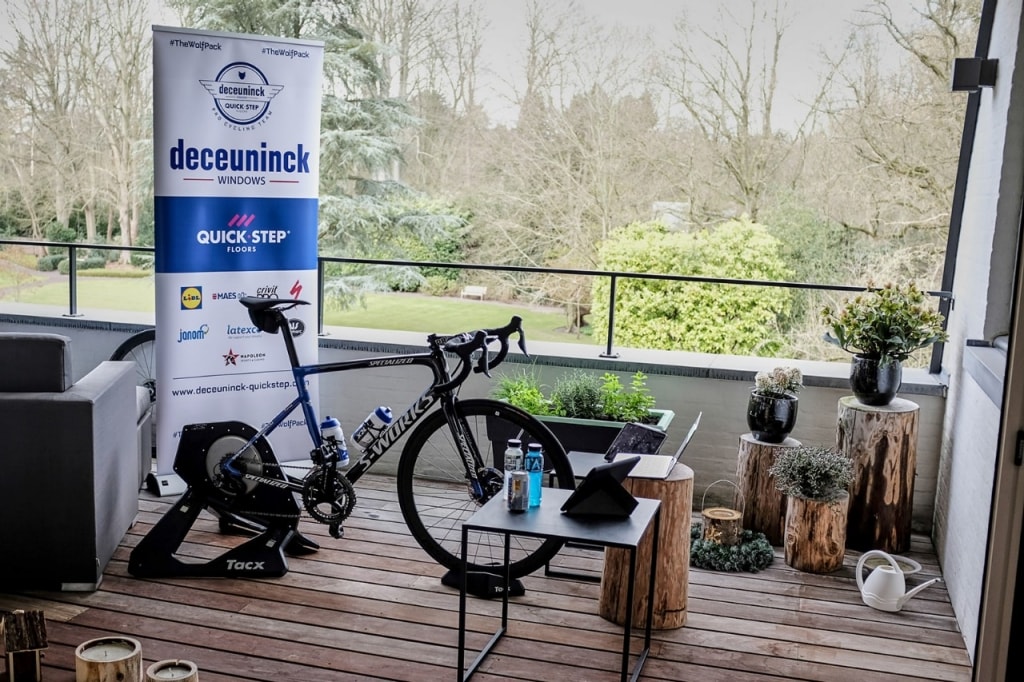