A Ripper in Zolder

On the day after Christmas, the cyclocross World Cup descends on the Circuit Zolder racetrack. The course is steeped in cyclocross lore, and the mix of high-speed power sections and treacherous, technical drops make it a fan and racer favorite for the series. Rain followed by blustery winds left the sandy soil in prime hero dirt condition, with tacky descents plunging through the pines. The result was a full on ripper of a race with high speeds and grip-it and rip-it descending that captivated the fans. You could hear the roars echoing through the forests every time Mathieu Van Der Poel fearlessly charged those steep drops on the famed Belgian track. 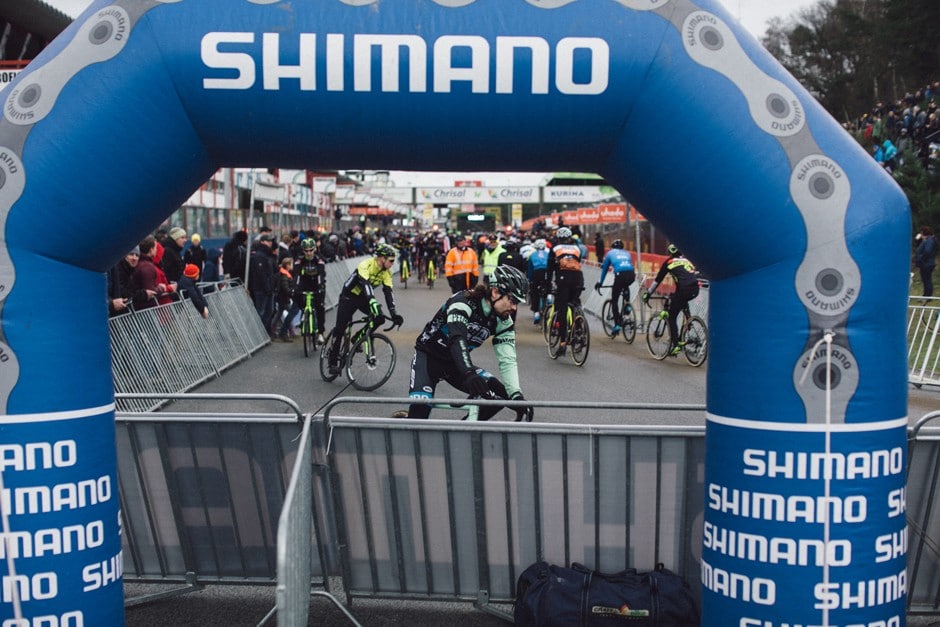 A look down the start straight, as racers warm up for the seventh World Cup of the 2017-2018 cyclocross season. 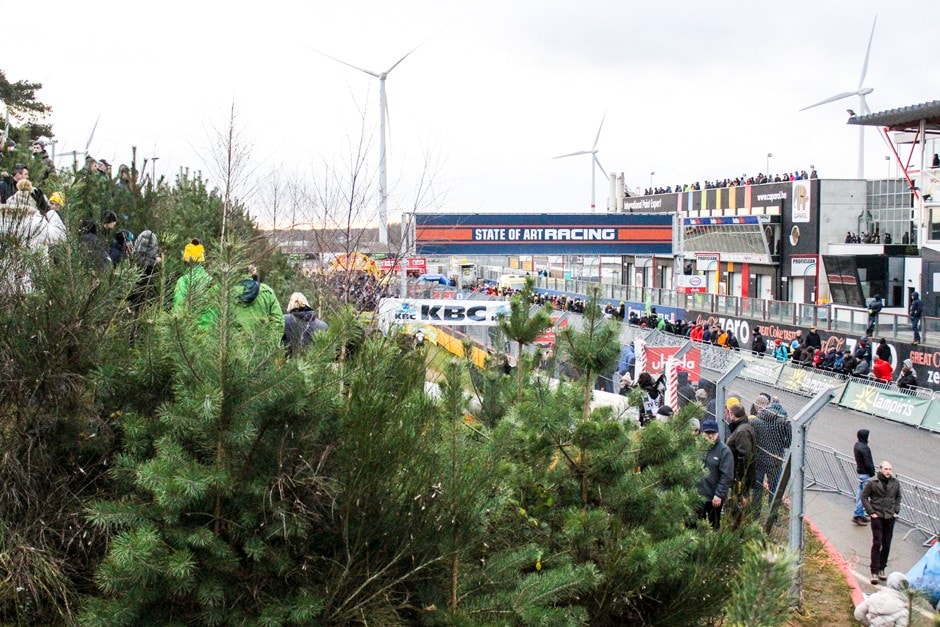 Fans line the racetrack for a glimpse of the action. The course mixes full-gas, long flat straights, with punchy climbs and steep descents through the pine forests on the hill next to the track. 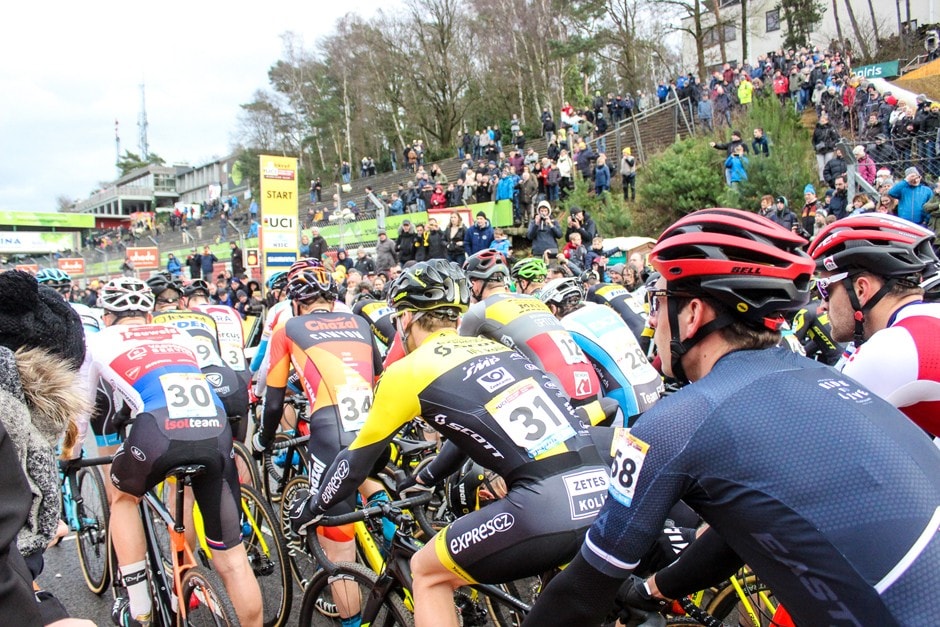 A deep field in Zolder, 60-plus for the men, awaiting the green lights to go blasting down the start straight. 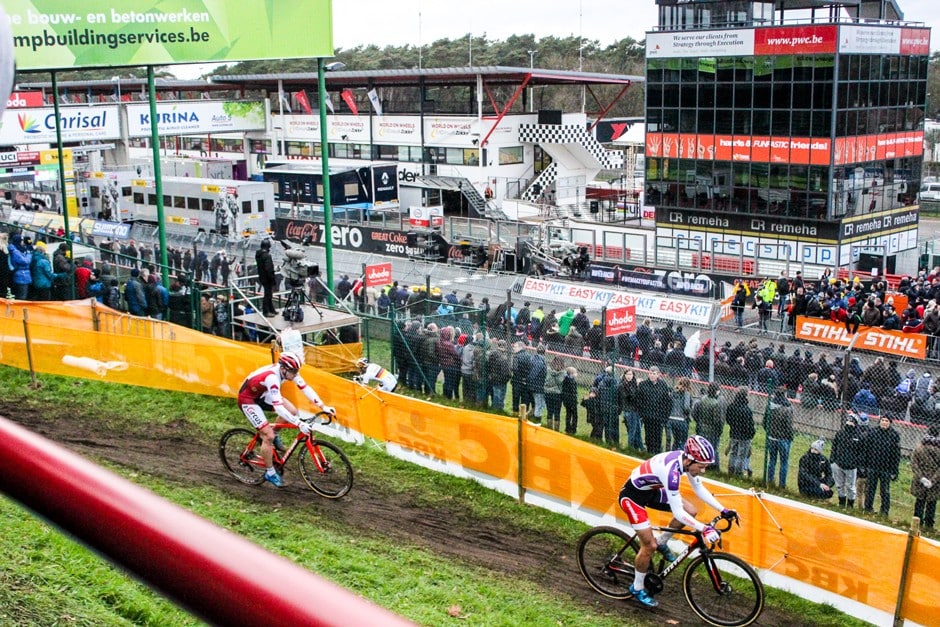 After huge stretches of pavement and some twists through the lower pines, riders start to climb the off-cambers en route to the upper forest past pit two. This particular section had two lines. Tom Meeusen and Wietse Bosmans take the lower as it afforded more exit speed on the swooping right hand exit. The thing about climbing in CX is, it’s never just one long climb. It’s a series of short powerful ascents or runups, followed by technical plunges. This is the site of Lars Van Der Haar’s heroic pass during the 2016 World Championships. Though he overtook Wout van Aert, he couldn’t hold on for the victory, eventually finishing second. After the plunge it’s up the Shimano stairs. 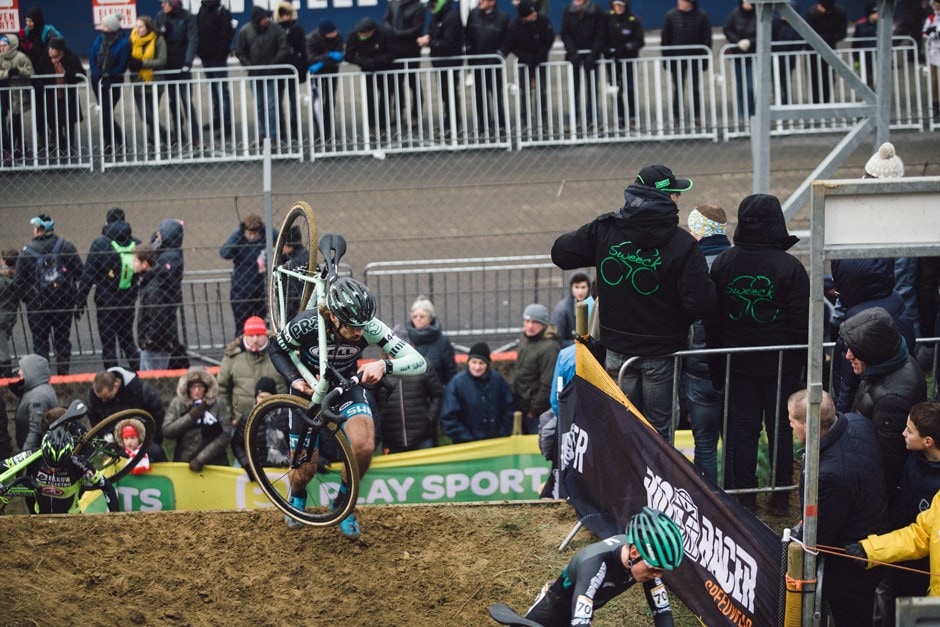 A view from the top of the Shimano stairs. After a quick remount, it’s full gas to try and ride the next steep climb onto the upper pavement. 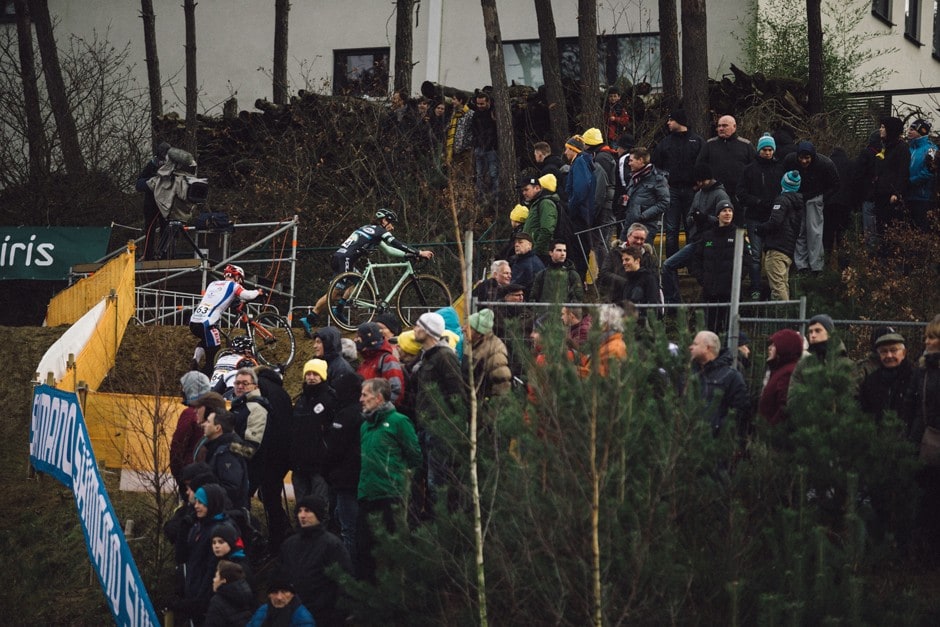 Of course, lap traffic on the opening laps makes it tough for the back of the field. Once one person gets off, everyone behind them runs too. Drew crests the top of the run-ride combo, prepping for the last of the climbing on the lap. Mathieu Van Der Poel’s mix of fitness and finesse make him the undisputable leader of the cross pack this season. Here he powers up the final climb, riding away from the rest of the field en route to his sixth World Cup victory of the season. Even at the back of the field, riding the run ups is crucial. It saves Drew time, energy and allows him to make the pass in the upper pines above the Zolder track. 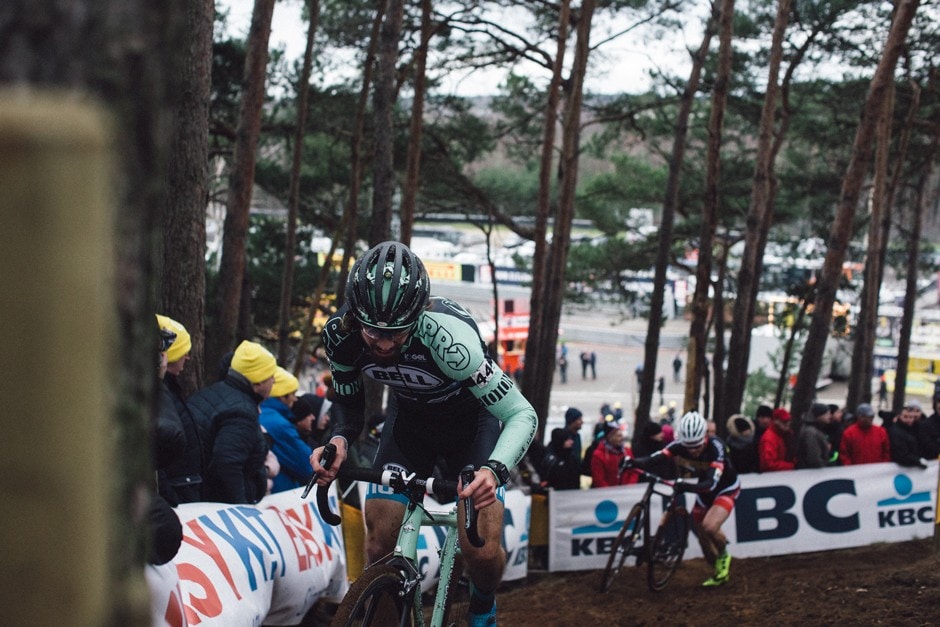 By the final little kick, you can already see the advantage of riding over running. Practice those hard hills, kids! 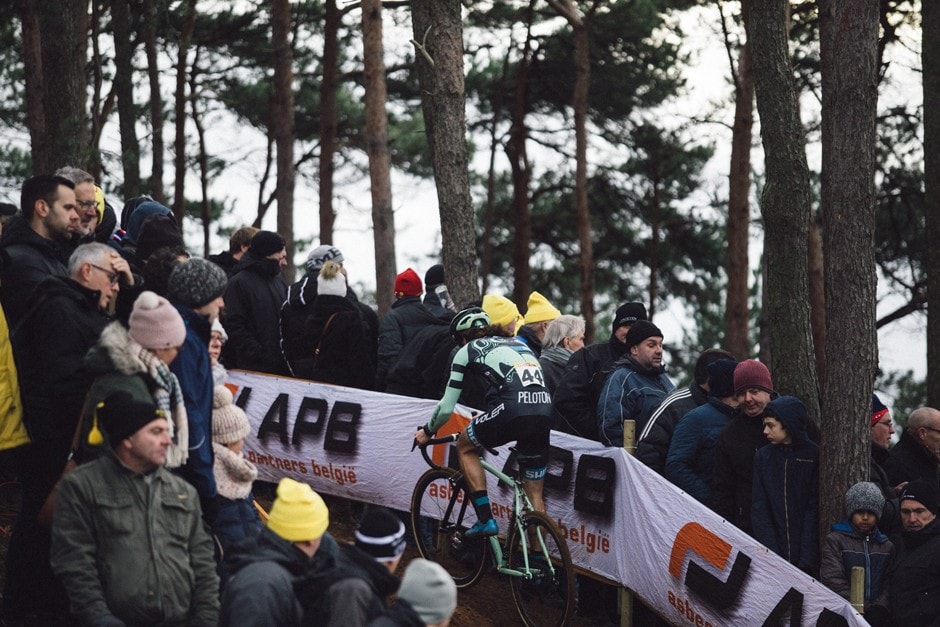 Belgian crowds are great and supportive, even if they are occasionally (okay often) disinterested with those struggling away from the front of the race. 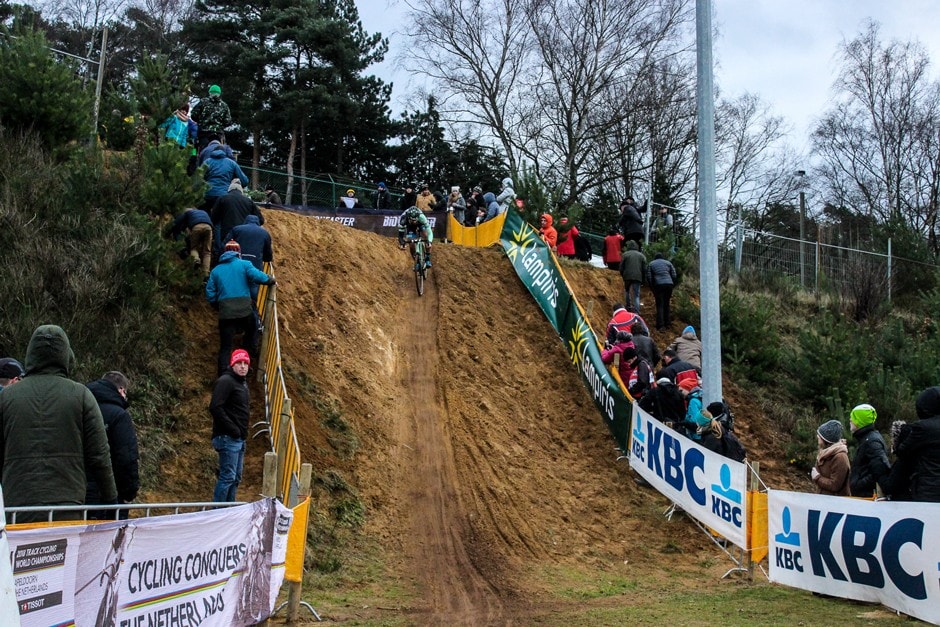 One last steep drop before spitting back out onto the start straight. From there, it’s another lap of hard flat efforts followed by focus demanding technical sections in the sandy, pine forests of Eastern Belgium. 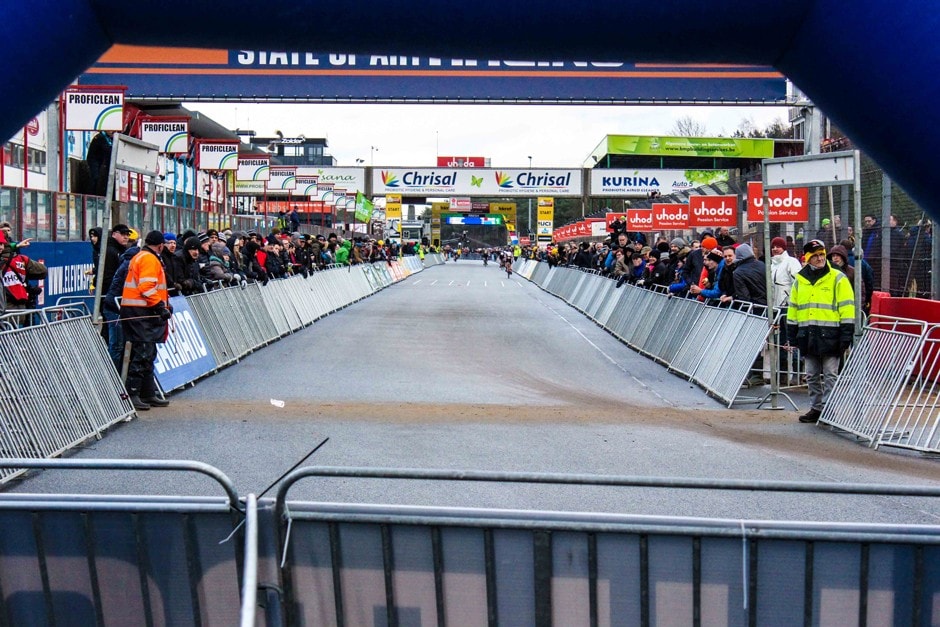 Heading out for one more ronde (lap) of pain and suffering in Zolder, Belgium.