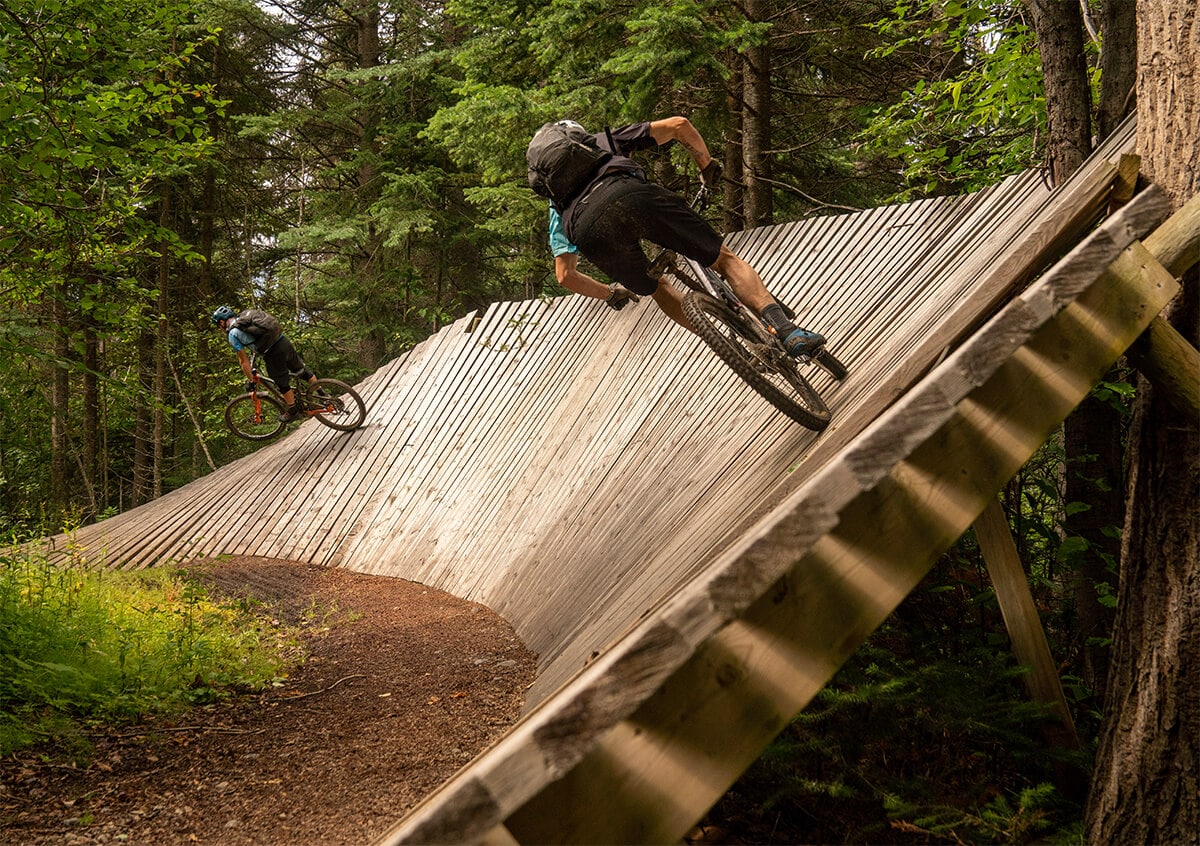 Most mountain bikers have heard of the infamous BC Bike Race. The epic stage race through British Columbia is the western hemisphere’s largest mountain bike stage race by far and one of the most challenging. The seven-day race covers nearly 50 kilometers per day with courses that boast over 75% singletrack. Much of the race features technical trails, and due to its location on the west coast of BC, it’s often slippery, steep, and gnarly terrain.

This past July, BC Bike Race hosted its 13th annual race to a sold-out crowd of 650 riders. Each year there are slight changes to the tracks, but overall the route and logistics remain the same. The event team that hosts this traveling roadshow has it down to a science. From navigating trails, to preparing food, to setting up and tearing down tents, it’s a miracle that this orchestra of events has such a harmonious tune to it.

However, what really makes BC Bike Race legendary is the immersion into BC mountain bike culture. It’s something special. And that’s why the longtime organizers decided to branch out and create the BC Bike Ride: A tour experience that utilizes the same expert events team that takes small groups of mountain bikers to ride the lesser-known regions of BC.

One of the beauties of a ride event verses a race is the ability to experience BC without the pressure and preparation that racing often requires. Sure, it's helpful to have some base fitness for a multi-day ride like this, but participants can choose their own adventure each day, and the options are plentiful. Also, the BC Bike Ride keeps its groups to a fraction of the size of the race, which helps minimize stress while still providing the culture and feel of the main event. 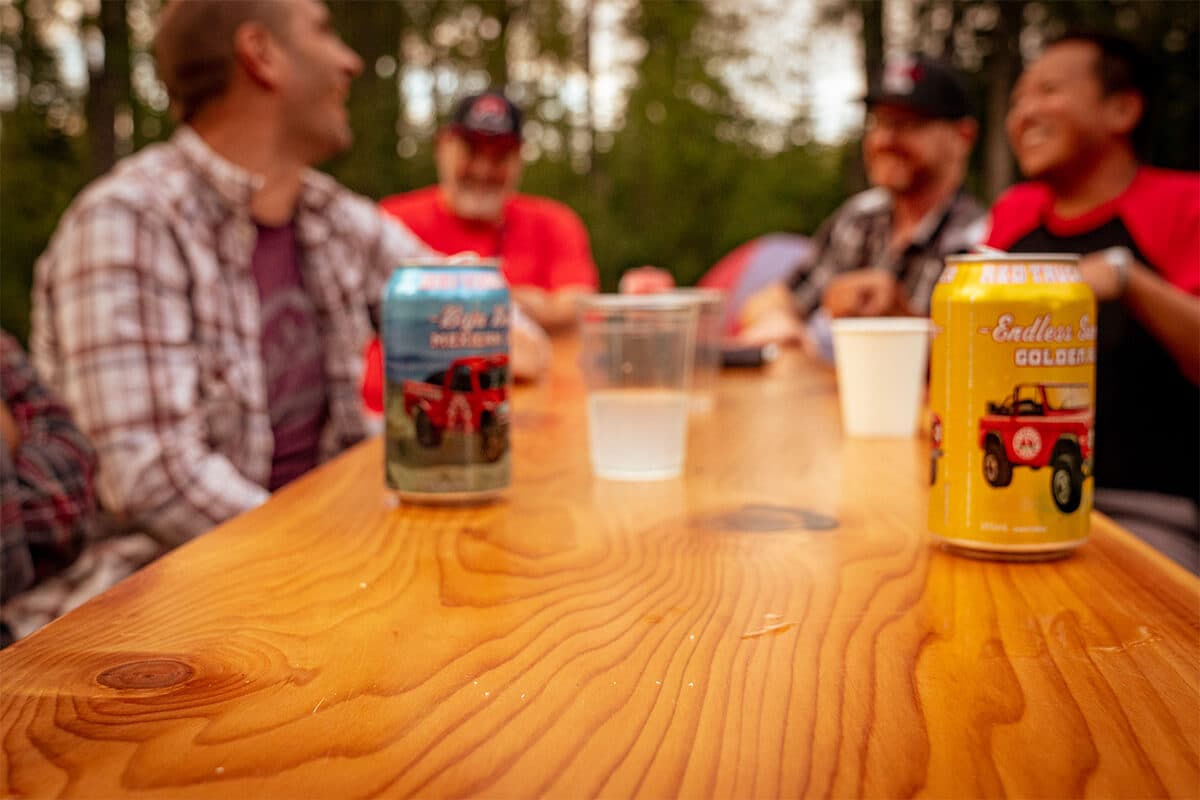 British Columbia is huge. It takes almost 30 hours to drive from the bottom to the top, which is roughly the same distance as Vancouver to Los Angeles. BC is twice the size of California and three and half times the size of Japan. Its coastline stretches over 17,000 miles, and while it's a beast of a landmass, most of the population lives in metro Vancouver on its southern coast.

Showcasing lesser-known areas of BC, including the remote northern region, the BC Bike Ride takes riders on a road trip through the province. The journey is much more than a group of out-of-town mountain bikers jumping from town to town and riding trails. Instead, there are strong relationships in place with local trail clubs, First Nations, caterers, yoga instructors, guides, campgrounds, politicians, and bike shops. The integration that happens within each community is one of the most significant aspects of these events.

This year, the BC Bike Ride started in Prince George, or PG, as British Columbians call it, and our 7-day journey would take us to four remote towns and cover some of the best riding areas in northern BC. Most of the trails in this area are purpose-built and not old, reclaimed hiking trails. They're relatively new and well thought out networks that will blow any mountain biker’s mind. Prince George is the traditional home of the Lheidli T’enneh and Carrier Sekani First Nations people and the most populated city in Northern BC with over 65,000 residents.

Our BC Bike Ride group was made up of 10 riders from the States, Denmark, and Mexico. It was a small collection of adventurous folks looking for something different and unique as far as mountain biking experiences go. Each day of riding started with a talk by our lead guide, Darren Butler. Co-owner of Endless Biking, Darren is also an instructor and extraordinary mountain biker. Endless Biking is based in North Vancouver and has collaborated with BC Bike Race for over a decade. Both Darren and his wife Kelli are instructors and board members of the PMBIA (Professional Mountain Bike Instructors Association). They have helped develop and administer criteria to train other coaches and guides around the world. In short, they know their shit.

Justin Mark, otherwise known as J-mar, has been lead bike patrol at BC Bike Race for ten years. His technical expertise, fitness, qualifications, and humor make him an instrumental part of the guiding team. J-mar and Darren worked together to create a super safe and fun experience for the BC Bike Ride, which caters to almost every ability and taste. While the bulk of the trails we rode were intermediate to advanced, Darren and J-Mar’s knowledge and pre-planning of the area were key to everyone having the time of their lives. 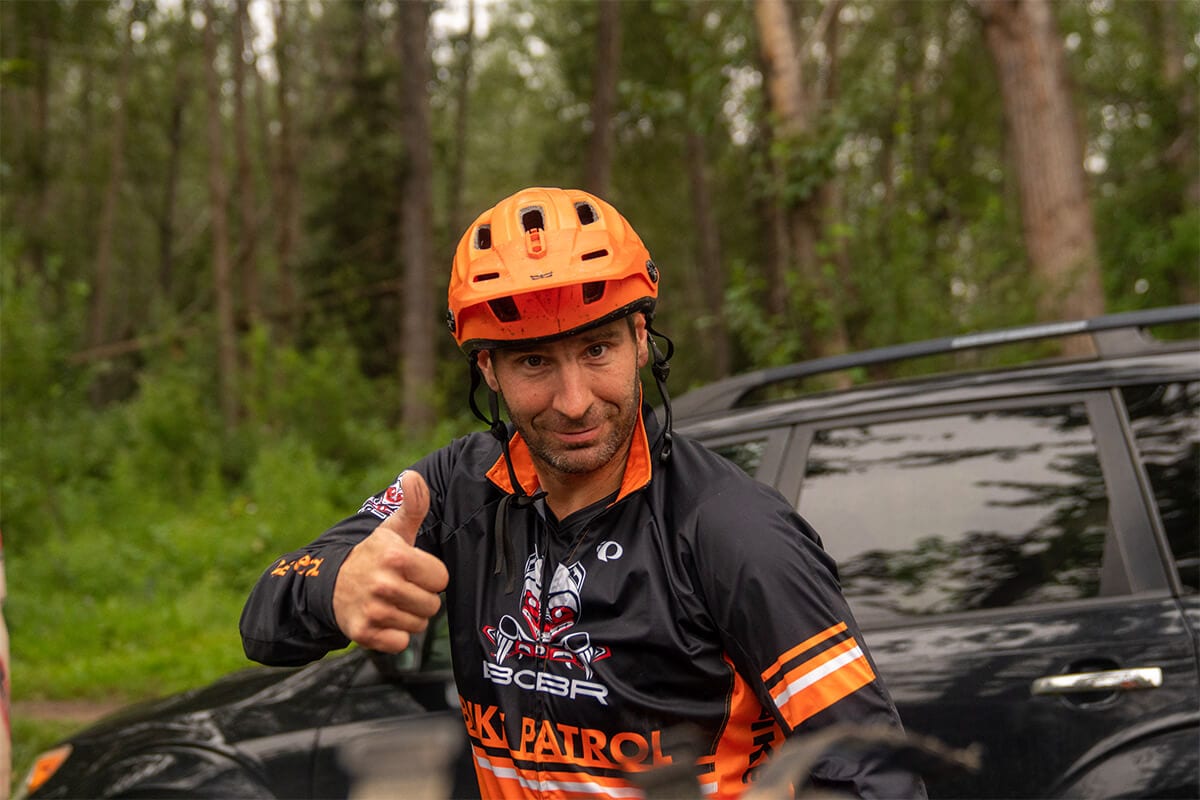 Jacob Mullen, a PG local and professional mechanic and guide, also joined us for the duration of the trip. Any mechanical work, bike building, and repair, washing, lubing, and set-up was done by him. The guests were there to ride (and eat), and the crew handled the rest.

Our first morning of riding in Prince George started in an area called Otway. It was the perfect place for a warm-up ride with nothing too technical and it gave everyone a chance to work into the week and get the legs moving. No matter where you ride on the planet, the dirt is a little bit different everywhere you go, so it’s nice to dial in air and tire pressure according to the terrain. Some of our guests were amazed at the tweaking Jacob did to their suspension as he was checking over bikes. As a full-time mechanic at Ruckus Bikes in PG, he knows a thing or two about customization, and sometimes they are small details, but they matter immensely. 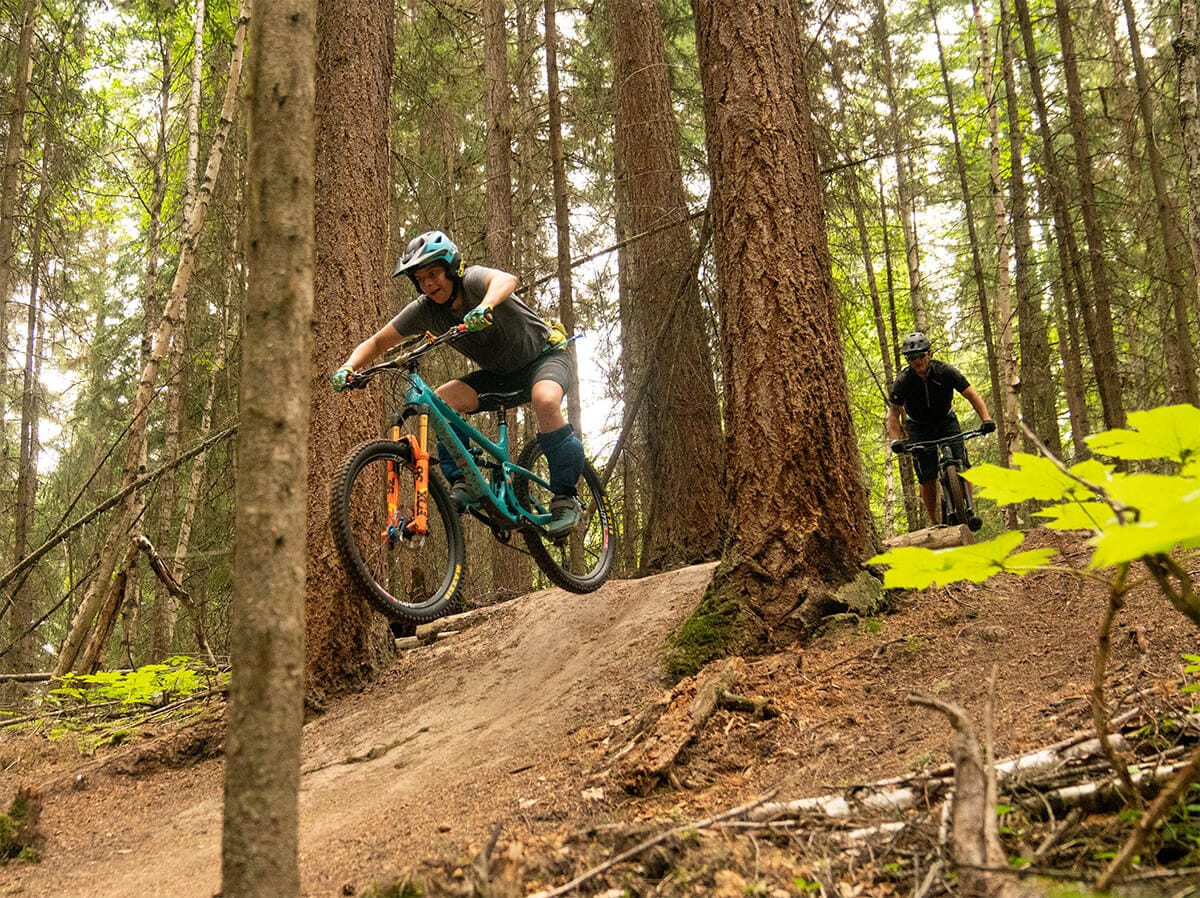 That afternoon’s ride at the Pidherny trails in Prince George offered some bigger and more challenging opportunities. The trails featured woodwork sections that are not for the faint of heart. But with purpose-built terrain, there’s almost always a ride-around option on every feature. One of the best parts about BC Bike Ride is guests can utilize the on-demand coaching and instruction from the experienced guides. It’s one thing to find a route on a map; it's another to ride the trail with some of the best coaches in the business, helping you with proper technique as you go. Every single rider on this trip improved their skills throughout the week. Whether it was jump training, cornering, braking, switchbacks, bike set-up, steeps, or climbing, there were opportunities to improve every day. Our next stop on the trip was at the especially unique Burns Lake area. We were served by a local First Nations catering company that prepared bear meat skillet, moose stew, and a local salmon stir fry. All of the food was harvested by their family, which has been native to the area for centuries. Their pride in their creations was evident and having them welcome us onto their lands before dinner was a special moment.

The Burns Lake Mountain Bike Association (BLMBA) has created one of the most innovative, progressive, and sanctioned mountain bike parks on the planet. Camping on the shores of Kager Lake, we could ride directly from the campsite to a trail network with over 100 kilometers of trails to choose from. 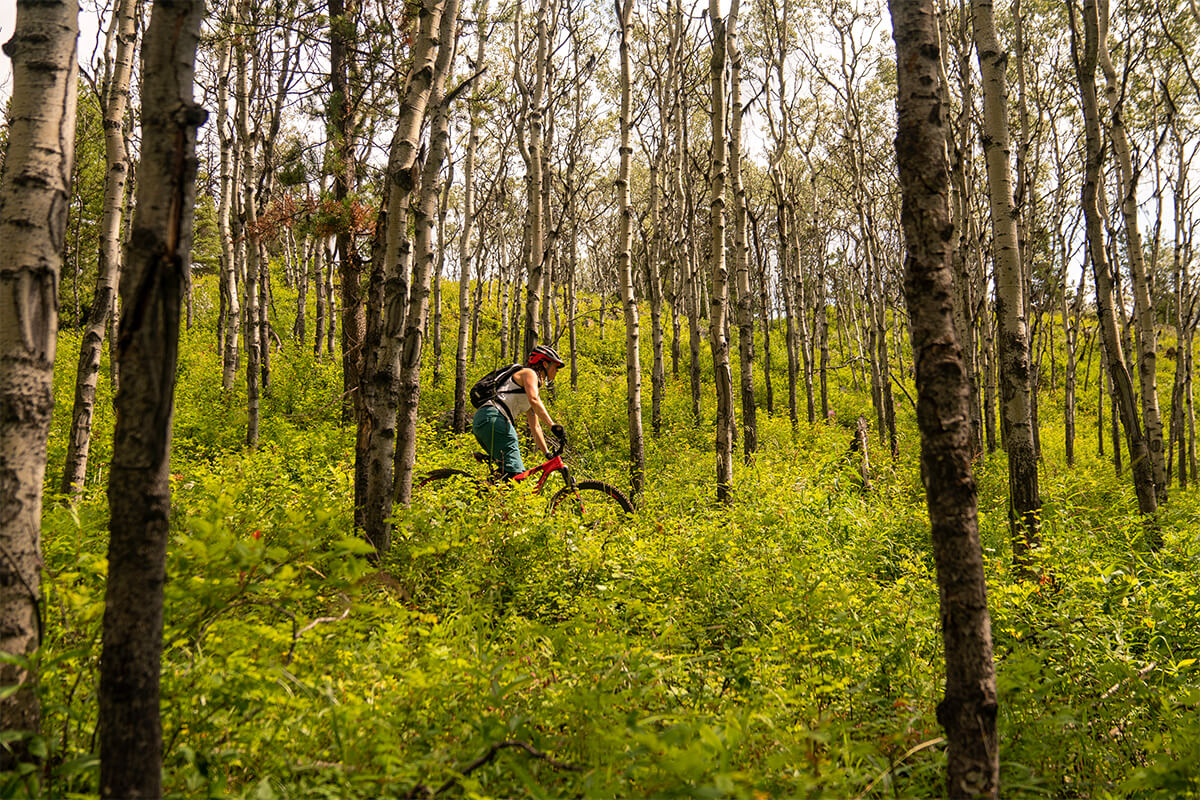 Just 1,000 kilometers north of Vancouver, the tiny township of Burns Lake has a population of 1,800 people. Having been born and raised in BC, I was incredibly proud to tour this amazing mountain bike mecca. Every one of us was stunned by the trails; they truly need to be seen to be believed. Like Burns Lake, many small towns in northern BC are transforming from natural resource-based economies to mountain bike tourist economies, or at the very least, are being boosted by trail development.

After two full days of exploring Burns Lake and enjoying an evening concert at the campsite with an award-winning local musician, Rachelle van Zanten, we packed up camp and headed farther north on BC’s infamous Route 16 to Smithers. World-renowned for its fishing and skiing, Smithers is now also known as a mountain bike destination. The mountains here are bigger and more prominent than Prince George and Burns Lake, and the climate slightly more coastal. Trees are bigger, forests lusher, and humidity more noticeable. 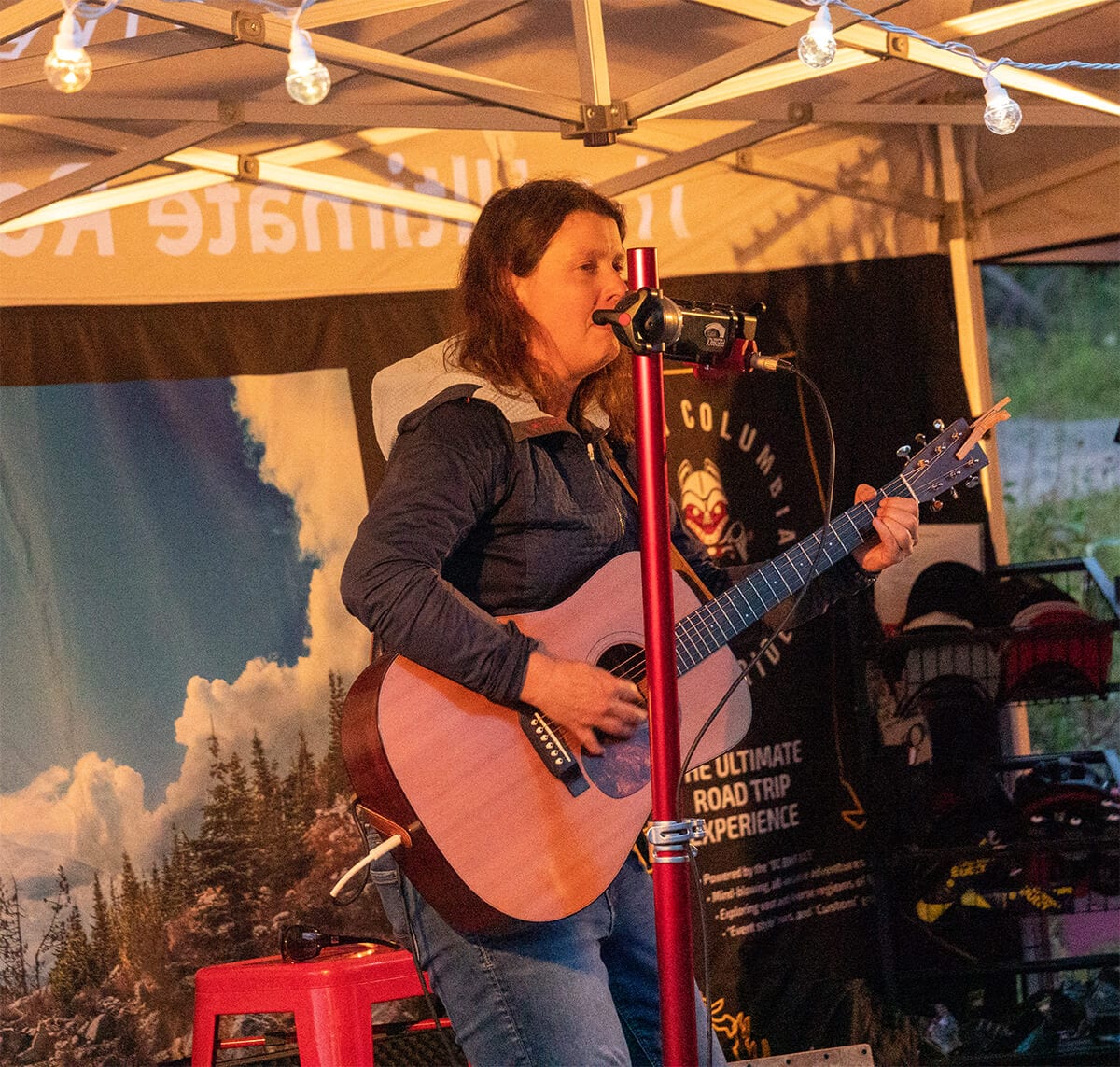 Our group had dinner at the Smithers Brewing Company that evening and the mayor of Smithers, Taylor Bachrach, also known as Mayor Bikerack for his work in getting bike racks installed throughout the town, joined us for beers. Bachrach spent a few minutes providing our group with some history on the area and also thanked us for visiting. Genuine, local hospitality like this is what makes the BC Bike Ride exceptional.

The trails in this area are classic with big rock slabs, well-built jump lines, and fast flowy singletrack. The weather had a coastal dampness in the air, so we also contended with greasy roots and rocks. This added some extra spice to our rides, especially for the southern California and Mexico crew, who don't typically experience these kinds of conditions at home. 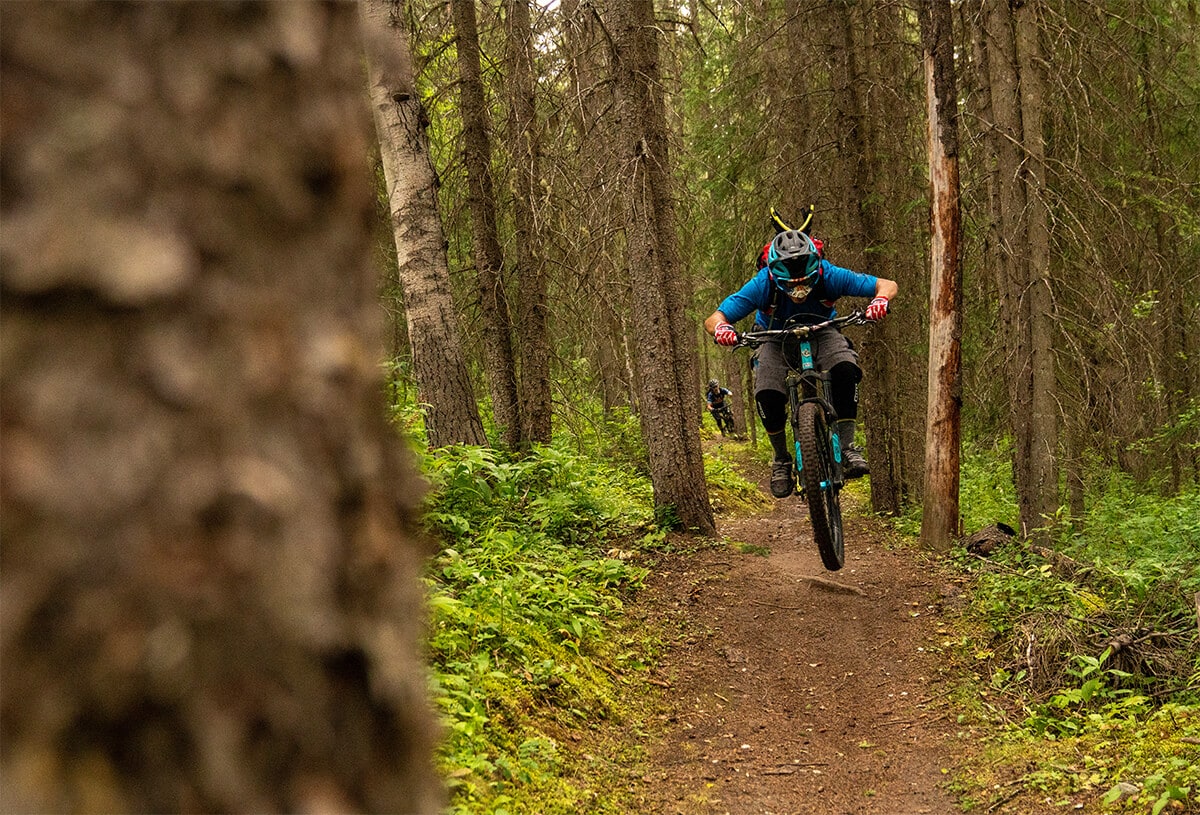 One of our dinners in Smithers was an all-time experience. Justin Calof of the Smithers Mountain Bike Association invited us to his place in the woods for a classic Canadian outdoor meal. Moose blankets, salmon, homemade bread, spicy margaritas, garden veggies, and homemade cheesecake were a few of the options served. His wife Liliana pulled out all the stops for a delicious and beautiful meal served up in their spacious woodsy yard.

On the way to our last stop of the trip, we paused for a tour of the historical ‘Ksan village in Old Hazelton on the Skeena River. The Gitksan people are indigenous to this area and the Skeena has been their lifeline to food, trade, and transportation for thousands of years. We toured native longhouses that sit on the banks of the river and learn about these hearty people of the north. 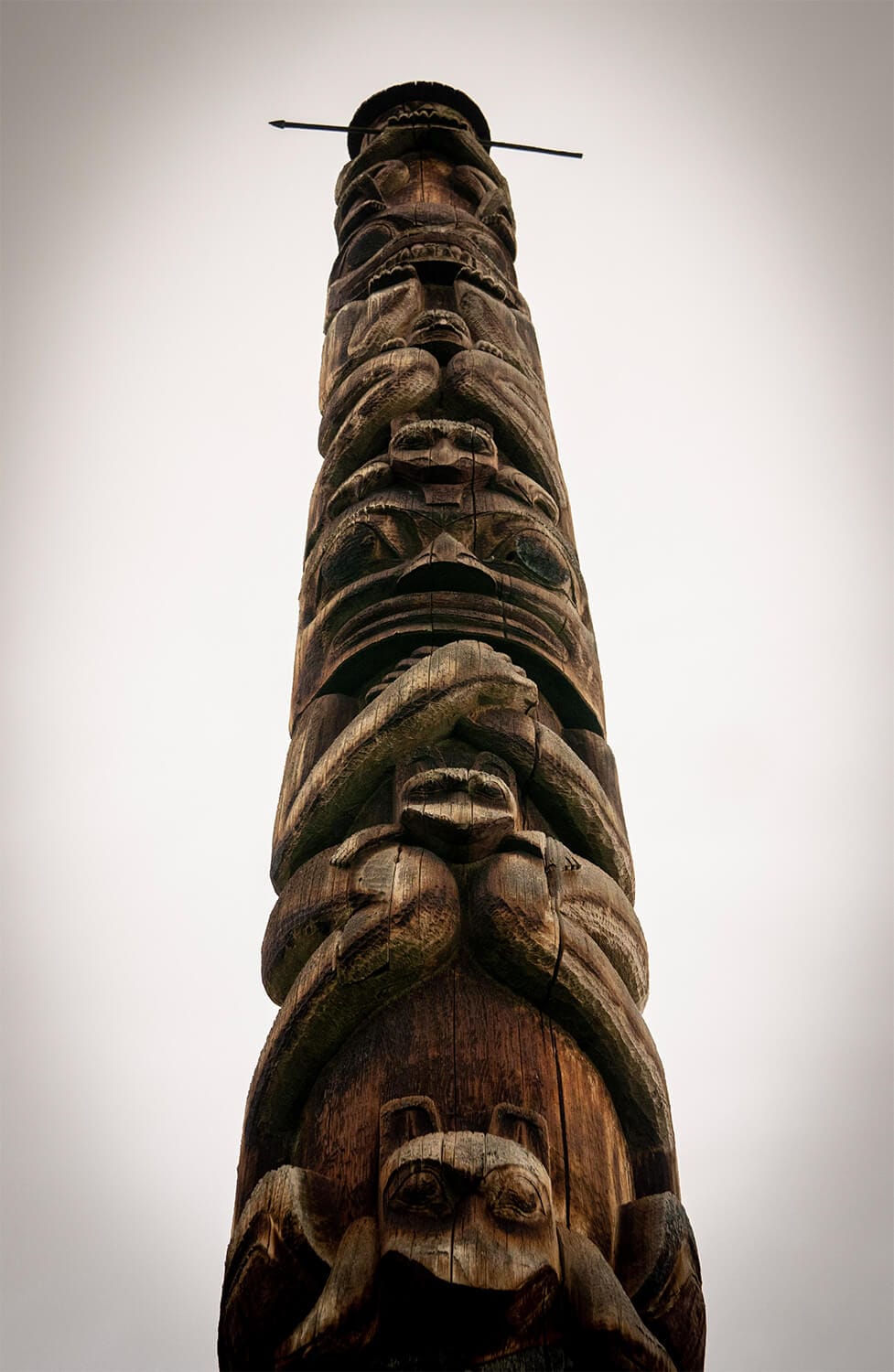 We docked in Terrace early that evening at the Ferry Island Municipal campground. The camp was already set up for us and the caterers had food waiting as everyone claimed a tent and unpacked their bags. We had one full day of riding in Terrace, which was the most northern town of the trip. TORCA (Terrace off-road cycling association) has done an incredible job of building out two distinct mountain biking zones in this area. We spent our day at Terrace Mountain with local guides and directors of TORCA, Aleksa Havelaar and Tyler Wilkes. Havelaar and her husband Fletcher, both local Terracites and absolute shredders, also own White Goat Coffee. 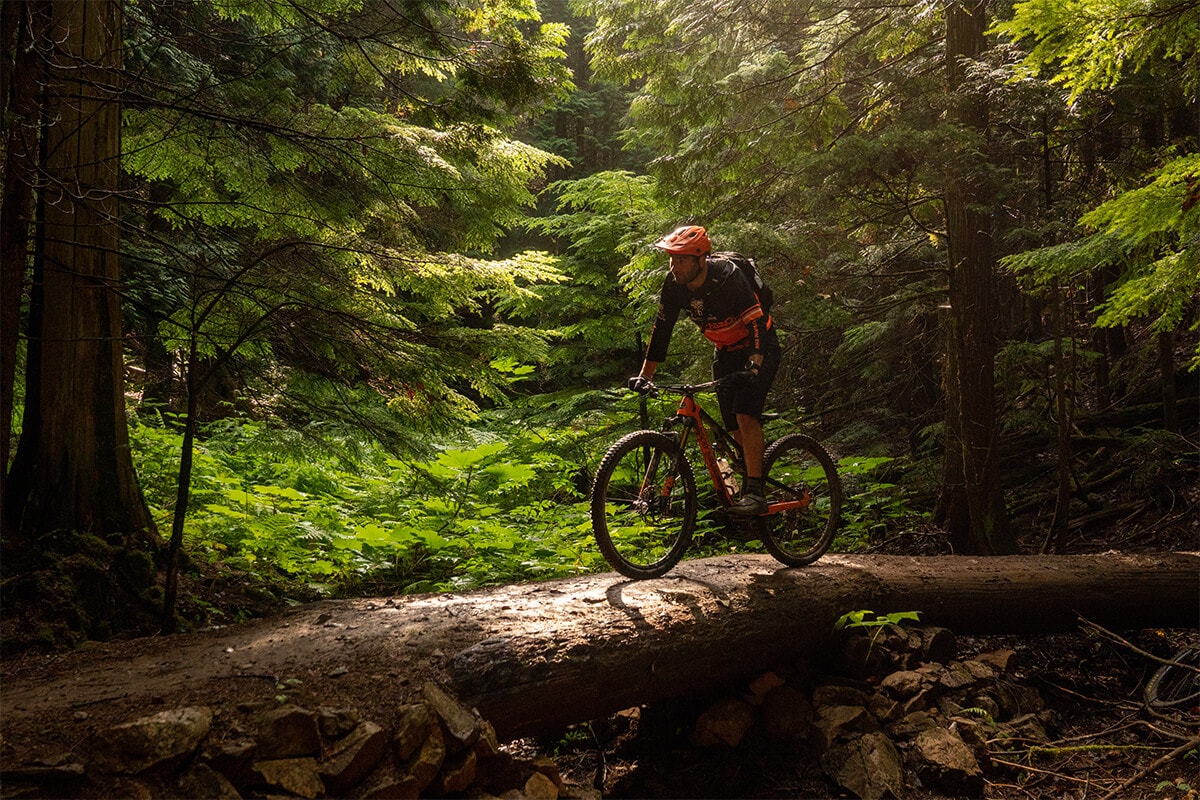 Fletcher had been traveling with our group throughout the week and brought a special brew he had roasted up the week before we started. Finally, back in his hometown, Fletcher was keen to show us one of Terrace's latest black diamond trails, Shangri-La. This stretch of trail is loaded with rock slabs, funky hip jumps, berms, drops, and innovative features that are truly works of art.

We spent all morning at the north end of the network and after lunch rode the southern section before dropping into our campsite for the final night of the trip. It was a dream to spend seven full days on the mountain bike in beautiful British Columbia on some of the most remote trails in the province.

Our intimate group bonded big time over the week, evident by the hugging and clinking of beer cans as we slapped palms and reminisced about the week. Calloused hands, a few mosquito bites, some scrapes, and bruises (it’s big-country out here after all) were evidence of our week on the trails. After we finished dinner, it was time to sit around the campfire and take in the final performance of the night. With Darren on bass and several other crew members joining in, the group played a repertoire of four or five songs for us and closed the concert with a final tune they’d written as an ode to the guests. It was hilarious and exactly imperfect, and it summed up the week perfectly. 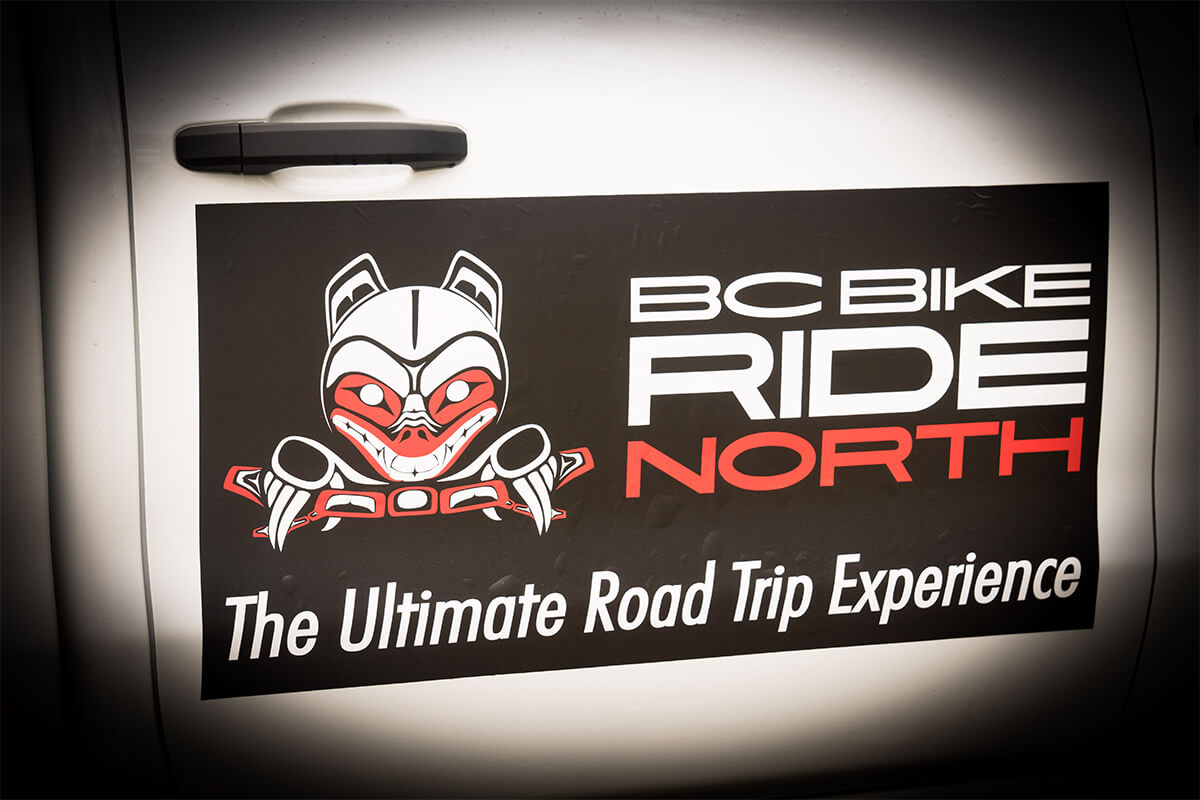