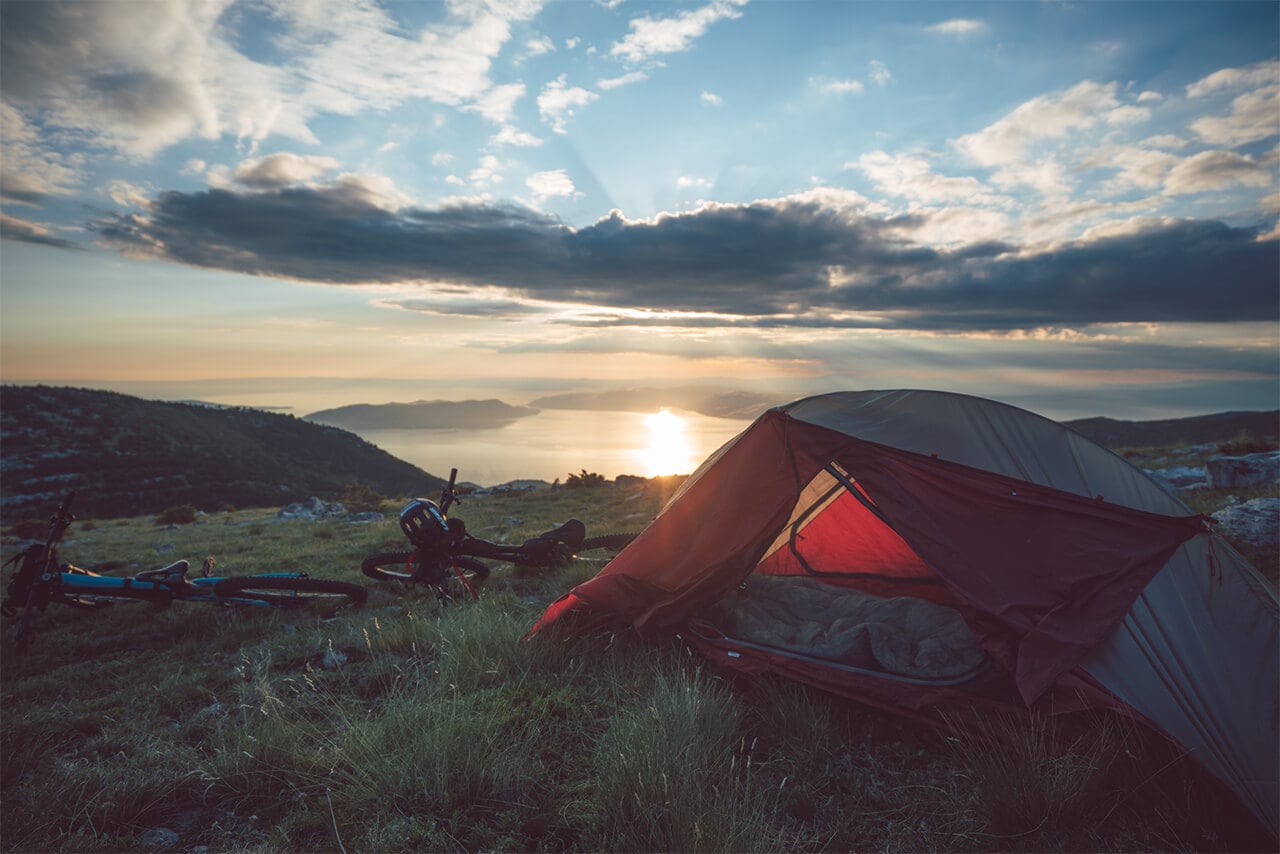 “Travel isn’t always pretty. It isn’t always comfortable. Sometimes it hurts, it even breaks your heart. But that’s okay. The journey changes you; it should change you. It leaves marks on your memory, on your consciousness, on your heart, on your body. You take something with you. Hopefully you leave something good behind.” - Anthony Bourdain

Normally May in Croatia is pleasant and warm, but this spring was different. The locals said they hadn't seen anything like it – more rain than usual and much cooler than previous years. My adventure buddy, Leslie Kehmeier, discovered the Adriatic Crest route on Bikepacking.com and we had now flown across the world to experience it. With nine days of ride time and in the best interest of realistic daily mileage, fun, and the unexpected, we cut the 612-kilometer route down to a more manageable size and decided to start in the small town of Smrika. 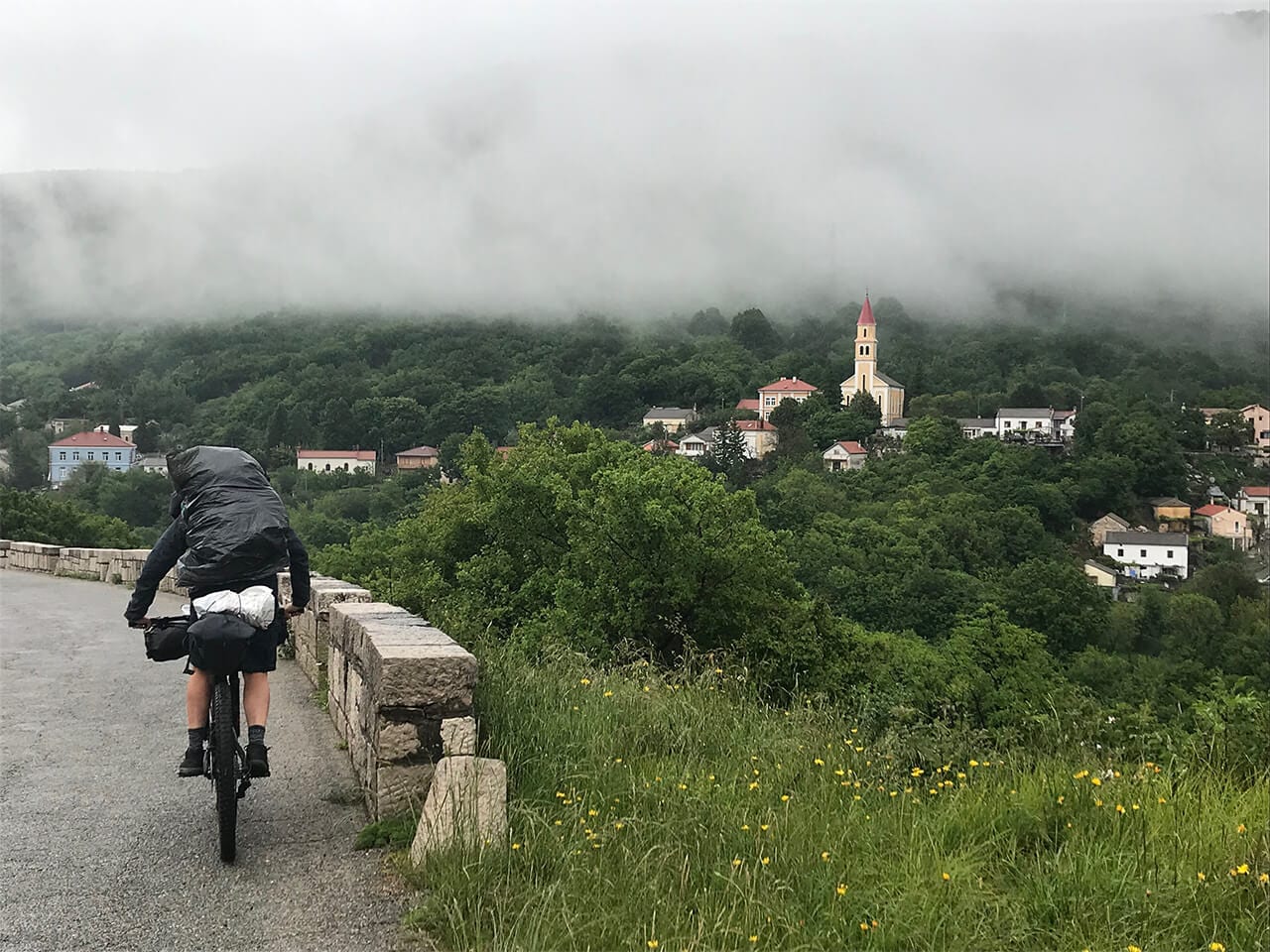 Leslie and I had been watching the weather in advance of the trip and we came prepared for the wet and remote trails. When we rode out of Smrika on the first day, we were loaded up with enough food for two full days of exploring. We knew supplies would be scarce to start, so we planned to wild camp high above the Adriatic, stopping at designated wells along the way to filter water.

Within a few miles of leaving our guesthouse, we were off the pavement and away from civilization. Encapsulated by lush, misty forests and singletrack, we climbed, ahem, crawled up the steep, loose, and slippery trail that followed powerlines and then turned to forested double track. We knew the route was possible to ride on hardtails but our backs and butts appreciated the plushness that our Evil Offerings full suspension mountain bikes provided. Heavily loaded with backpacks, frame, seat post, and handlebar bags, we adjusted suspension and tire pressure accordingly 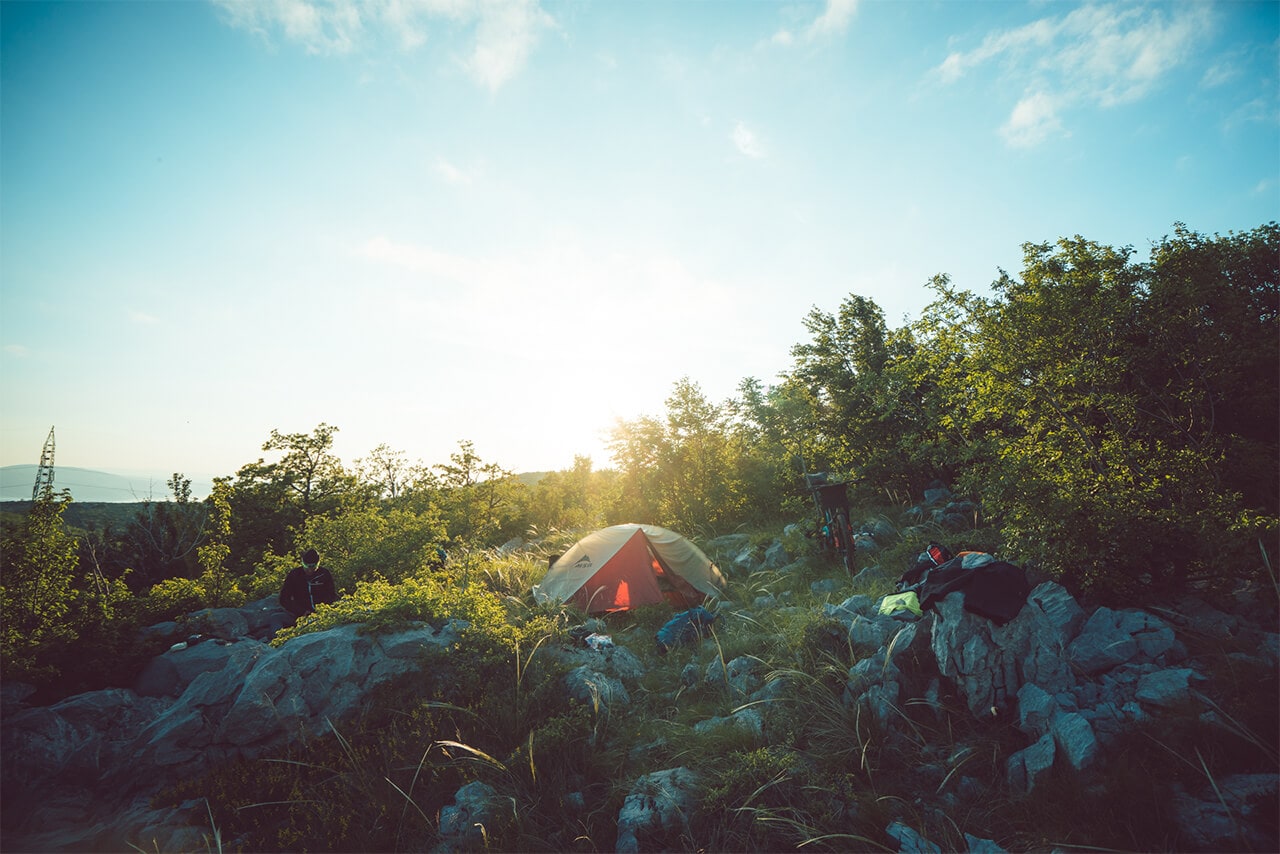 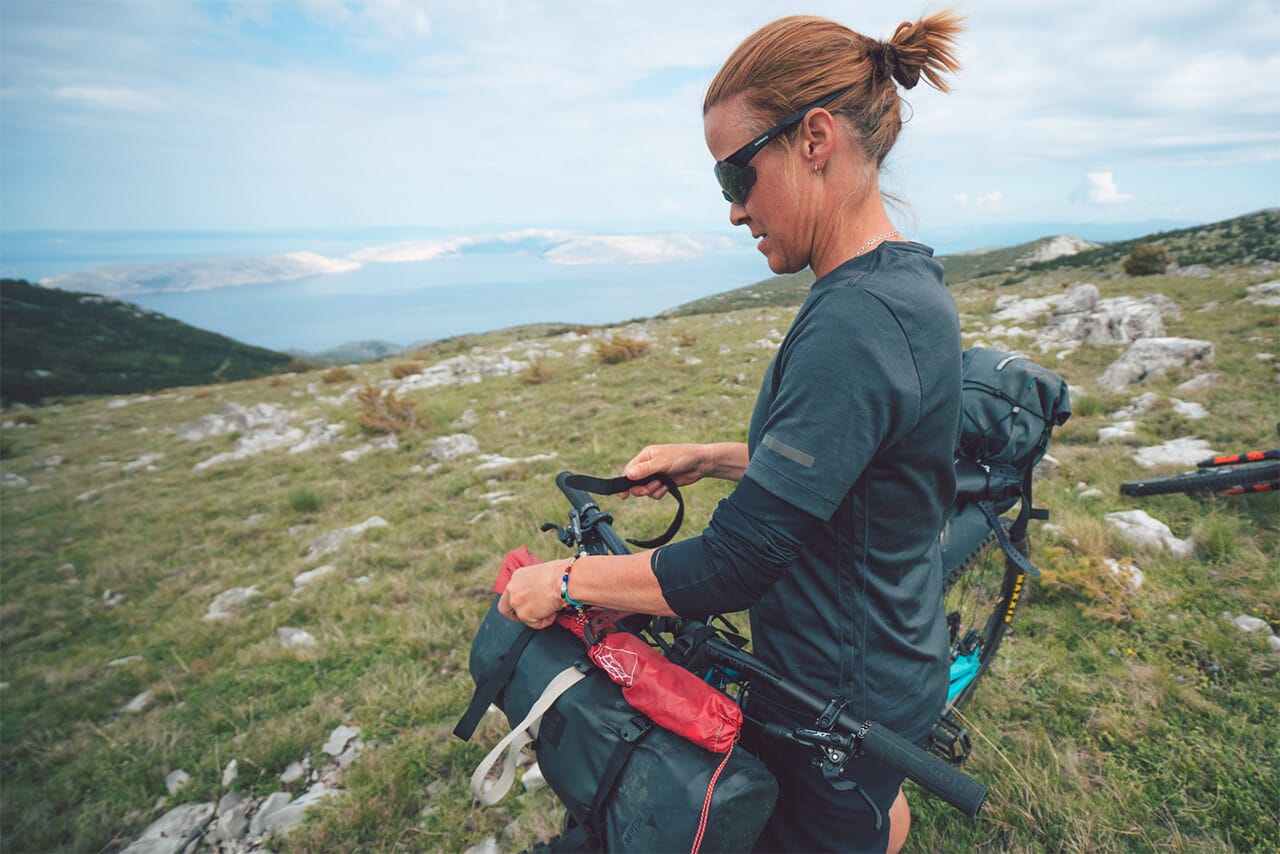 Searching out camp spots on the first few nights was challenging. We camped wherever we could find a reasonably flat spot. Our first night's location wasn't ideal, but we moved a bunch of rocks around and managed to create a small space to set up our tent and cooking equipment. We didn't bring any dehydrated food, which was probably a small mistake, but we did have tortellini, bread, cheese, and chocolate that we purchased from a small market in Smrika, and of course coffee from home.

We wanted to buy as much local fare as possible during this trip, and had we arrived a month or two later we could have eaten fresh figs and fruit along the way as well. The backcountry along this route was much sleepier than we expected - we'd roll past homes and farms, but there was hardly a person to be seen. There was the odd human on a hillside here and there but other than that it was just us, the birds, snakes, turtles, rabbits, and occasional deer.

Our second night was the most gorgeous camp spot of the trip with postcard views and a dramatic pink sunset gleaming across the Adriatic and her islands. Storm clouds brewed in the distance but we stayed dry and watched the drama from our safe perch on the ridge. The sun dipped below the horizon quite late, around 8 p.m., leaving us plenty of light to set up the tent, cook food, spread clothes out to dry, and ponder our next meal. Two full days on the bike and almost 100 kilometers behind us, we were blasting through our food and water. 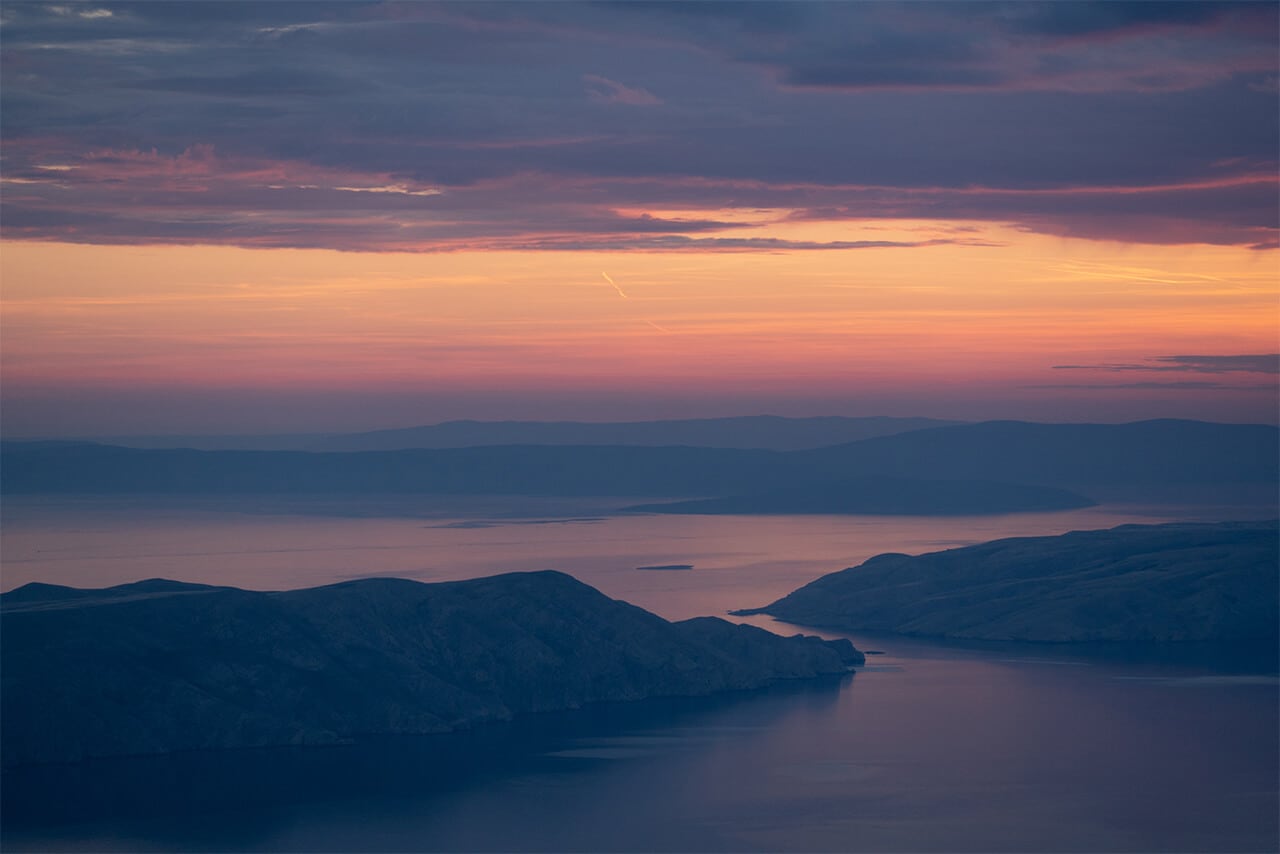 Deep into our third day, and anxious about our dwindling food supplies, we could see a small town on the map called Otari. It was hard to tell if there were any markets or stores in this village. We saw buildings when searching on Google, but not every tiny market shows up on the interwebs. When we arrived in Otari, we found a public water fountain near a church, but disappointingly, no markets or restaurants.

I lingered around outside a house across the street from the fountain, hoping to see a human while Leslie filtered water. Finally, a woman came out, either on her way to run errands or to see who these strangers were, loitering at the end of her driveway. Getting her attention, I was able to quickly communicate with hand signals "grocery store" motioning a hand-to-mouth type gesture that I learned in charades. Mere moments later, she deciphered my message and responded, "Market, no here…Krasno" as she pointed down the road. About 30 kilometers south of our lunch spot in Krasno, we unexpectedly came across a mountain hut just as the day was dimming and cooling off. It looked closed for the season, but we slowed down nonetheless and rode towards a window at the front of the building. A face peered back at us and then quickly disappeared. Within moments a woman came out from around the side of the structure. Hers was a different face from the one we saw in the window. Trying not to sound too desperate I asked, “Is there anywhere to stay farther down the road?” “I don’t think so” was her answer in much better English than our Croatian. “You can try…you can stay here if you want…”

We thought maybe she meant to camp in the backyard. 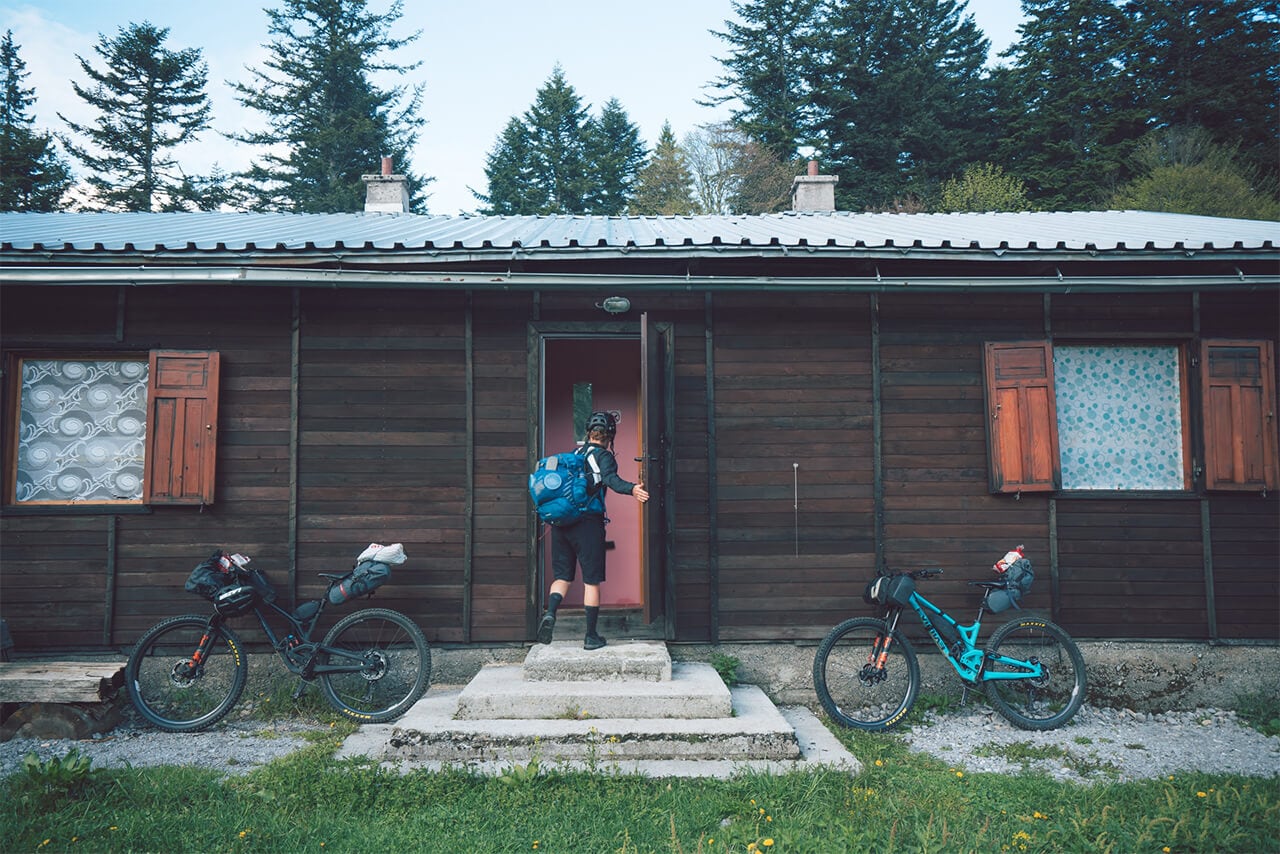 It’s hard to explain the relief we felt at the offer to stay inside. We leaned the bikes against the building and followed the woman, who we learned was named Danijela, into a dorm-style room filled with bunk beds. The area was packed tightly with neatly organized single beds stacked double-decker.

After offloading our gear and bags in the room she took us to the back of the building. There was a basic kitchen, wood stove, and a common area inside the hut. No electricity or wifi, this place was perfect. Danijela introduced us to two other people at the back of the building. One woman we recognized as the original face in the window, and the man, Krema, was Danijela's husband.

We found out that Danijela was president of the Zavizan mountain club and this was the Zavizan-Senj mountain hut that was owned by their club. Danijela's presidency meant her husband Krema went jokingly by the name Melania and we all had a good laugh at that one as we sat around the kitchen table. Melania insisted we try his homemade rakia, which is essentially fruit brandy. It was strong and potent. I tried to keep a straight face as it stung its way down my throat and I looked across the table at Leslie doing the exact the same thing. Proud of his potion, he showed us some of the flowers and herbs that he’d added to this custom mix. Tea came next and was much more palpable than the rakia, but just as hot.

Danijela demanded we stay and have dinner with them before retiring to our dorm. We joined the group for fresh bread, sausages, tea, beer, and of course more rakia. Entirely out of the blue, nothing organized or planned, meeting these three was a highlight of our trip. The language was only a slight barrier in comparison to the fluency of our humor, which kept the night rolling for hours. 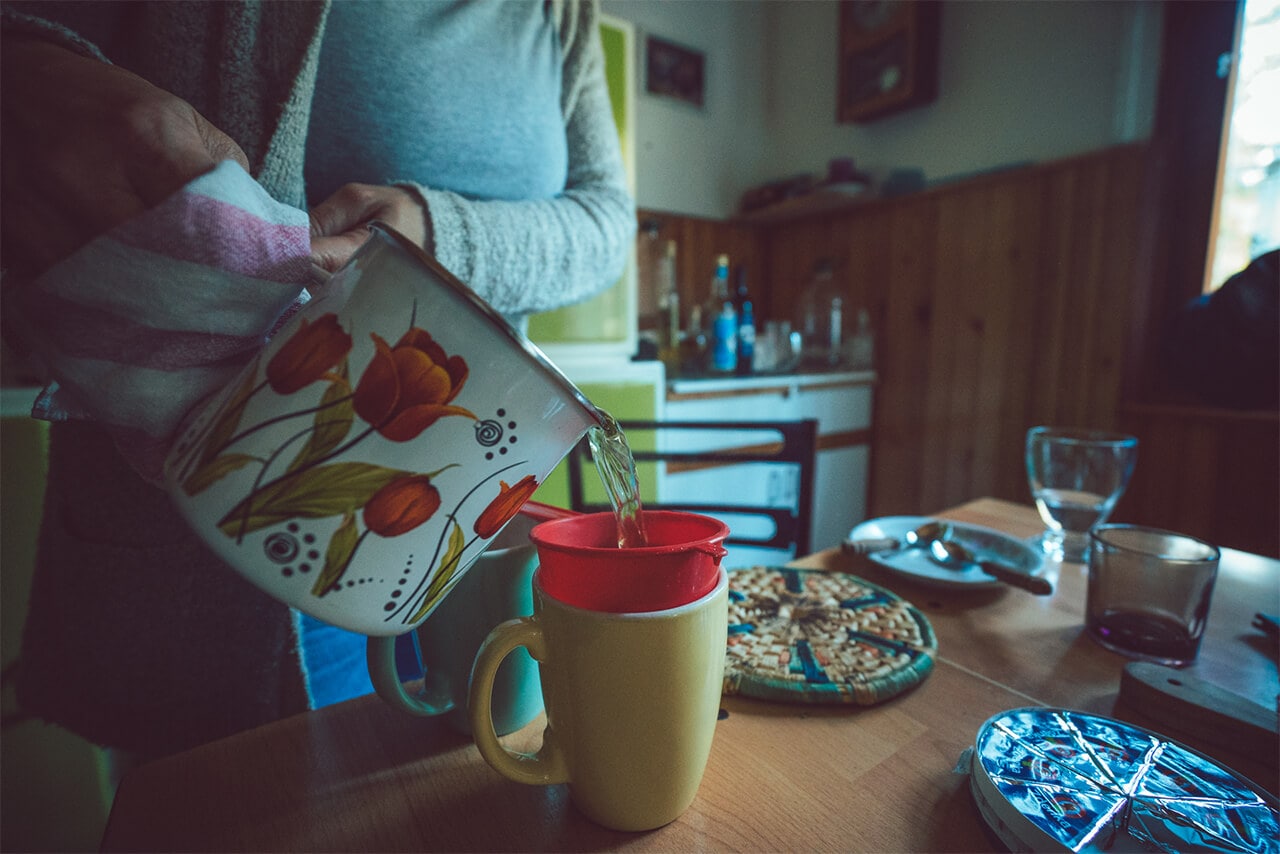