What if your pedals could talk?

This letter and pedals were sent to our North American Shimano headquarters in Southern California earlier this summer from Matt in Utah who wanted to share his story with us. We're glad we could be apart of 25 years of adventures. We look forward to 25 more. 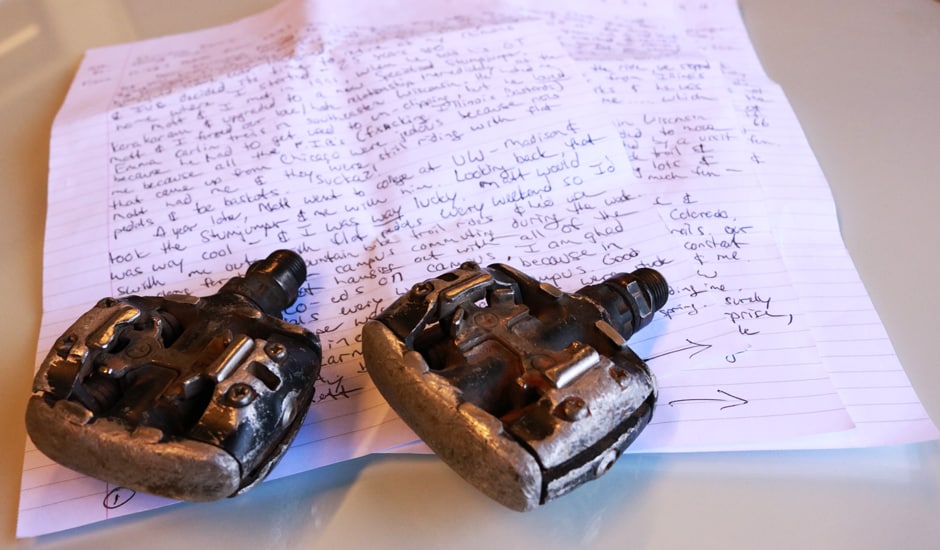 I’m writing you this letter to let you know I’ve decided to come home. It’s been 25 great years since my owner, Matt, bought me at the Wheel & Sprocket in Milwaukee. I’ve survived three different mountain bikes, countless rides, thousands of miles and more crashes than I could have ever imagined... but I’m finally tired and I’ve decided it’s time to retire at my Shimano home where I started – 25 years ago.

Matt and I met in 1991, when he sold his GT Karakoram and upgraded to a new Specialized Stumpjumper. Matt and I forged our love/hate relationship immediately at the Emma Carlin Trails in Southeastern Wisconsin. He hated me because he had to get used to un-clipping, but he loved me because all of the riders that came up from Chicago were jealous because now Matt had me and they were still riding with flat pedals. Suckers!

A year later, Matt went to college at UW-Madison and took the Stumpjumper and me with him. Looking back, that was way cool- and I was way lucky. Matt would switch me out with flat medals every weekend so I’d be along for his mountain bike trail rides and he’d use the flat pedals for campus commuting during the week. While I regret not hanging out with Matt around campus, I am glad Matt swapped pedals every weekend – because in 1996 his Stumpjumper was stolen on campus. Good thing those boring, inefficient flat pedals were stuck with some bad Karma jerk and not Matt.

I was majorly bummed at first, because riding the trails with Matt was delayed for a bit in the Spring. But then, with the help of an insurance check, Matt bought a brand new 1997 Stumpjumper S-Works from Ben’s Cycle in Milwaukee. It was like $1,500 at the time, which was absurdly expensive. It was green with a red shock, the Christmas bike. So, I was equally excited and nervous – excited, because I knew we’d start riding again, but nervous because his new bike had full XTR. I felt so stoked when Matt bought the bike and told the guy “don’t bother with the pedals, I’m set with my 737’s from my old bike.” So off we rode...

I’ve never forget our first ride at Emma Carlin. We went with a group of friends and during the ride, we stopped at a trail intersection and of those guys from Chicago totally checked me out and the new S-Works and he was way jealous. So I had that going for me... which was nice.

The riding with Matt and friends continued in Wisconsin for a few years. Then, in 2002, Matt decided to move to Salt Lake City, Utah. Part of that move was precipitated by a visit to Moab in 1997. Matt and I rode the Slickrode Trail and Porcupine Rim – two decades before paved parking lots and new hotels and all the crowds. That was so much fun – Me, Matt, some friends and miles of riding.

Matt and I joined a road bike club in Salt Lake City and continued riding together for years. Utah, Idaho, Colorado, Wyoming.. countless miles and solitude on the trails. Our rides together continued, even in the face of constant mocking regarding the age of both Matt’s bike and me.

Then in 2010, Matt decided to buy a new full suspension Stumpjumper. It was probably time. I was scared out of my mind. A new bike for $4,000 surely meant new pedals, right?

To my relief, and surprise, Matt bought the new bike and told Ben’s Cycles (again) that he didn’t need new pedals. Amazing.

So I was mounted on a new Stumpjumper and our adventures continued. Since that new bike, Matt’s had a shoulder surgery, broken ribs, a few concussions and a C4-5 neck fusion – but every time he still takes me out on the bike and we ride.

Well, we were in Moab this past weekend and I realized I’m out of gas. My bearings are totally shot, and my springs are worn. I hated to do it, but I told Matt it was time – time for me to retire. 25 years ago, Matt took me out of the box and put me on his bike. He literally has not once adjusted my tension or cleaned me out. He went to REI yesterday and bought a new set of M8000s. I hope they carry the torch well. If they last as long as I did, Matt will be 66 years old. I’ve probably lasted longer than most marriages in the U.S and holy s**t has it been fun.

So, I just wanted to say thanks and it’s great to be back home.