Throughout the years, the Tour de France has served as a true proving ground for Shimano componentry. From the introduction of STI shifters and SPD pedals to Di2 electronic shifting and disc brakes, the company keeps innovating to push the boundaries of the sport, and thus create cycling memories that will forever resound in the hearts and minds of cycling fans.

Shimano launched its first SPD (Shimano Pedalling Dynamics) clipless pedal system in 1990. This innovation featured a small cleat, attached to the shoe in a recess of the sole, to clip in to SPD-designed pedals. Thus, riders would be able to put power down into the pedals more efficiently (as well as being able to now pull the pedals on the way up for an even better cadence) by always having their feet in the correct position over the pedal axle.

This lasting invention greatly improved speed on the bike, not to mention the benefit of knowing that the shoes were securely attached to the pedals, even in wet and slippery conditions. From that moment on, gone were the classic toeclips of old. What wasn’t gone, was the epic Alpe d’Huez stage, and in 1991 Italian champion Gianni Bugno took the stage there in great style, outsprinting Miguel Indurain on his SPD pedals in one of cycling’s most beautiful jerseys – the Italian National Champion jersey. Later that year, Bugno would even go on to swap his maglia tricolore for a rainbow jersey.

Launched in 1990, the ‘Shimano Total Integration’ (STI) shifters totally changed the face of cycling. It combined the braking- and shifting controls into the same component, creating the iconic dual-control levers on the handlebar that we are now all so familiar with. It also forced a complete redesign of the ‘hoods’ that riders rest their hands on, making them loads more comfortable than they used to be. The prime advantage was that riders could from now on adjust their gearing without taking their hands off the bars, a gigantic leap forward from the commandeur downtube-shifters that were so common in the past. For the 1991 Tour de France, Shimano approached a number of veterans in the peloton to test the STI shifting system. Their findings would be evaluated and implemented in the versions that became available to the general public shortly thereafter. Australian hardman Phil Anderson was one of the original testriders, winning the stage to Quimper during the ‘91 Tour to further make clear the superiority of the new STI shifters over the old ways. The system definitely helped Shimano take the lead in groupset manufacturing. When a rider from Texas crossed the finish line in Paris with the yellow jersey on his shoulders, it was the first time the Tour was won by a rider powered by Dura-Ace 7700. Subsequent legal battles may have removed his name from the record books, but at the time it was a watershed moment for Dura-Ace, Shimano’s flagship component, whose story began in 1973. Back then, it was Shimano’s first attempt to infiltrate the professional road racing groupset niche, built using aluminum. 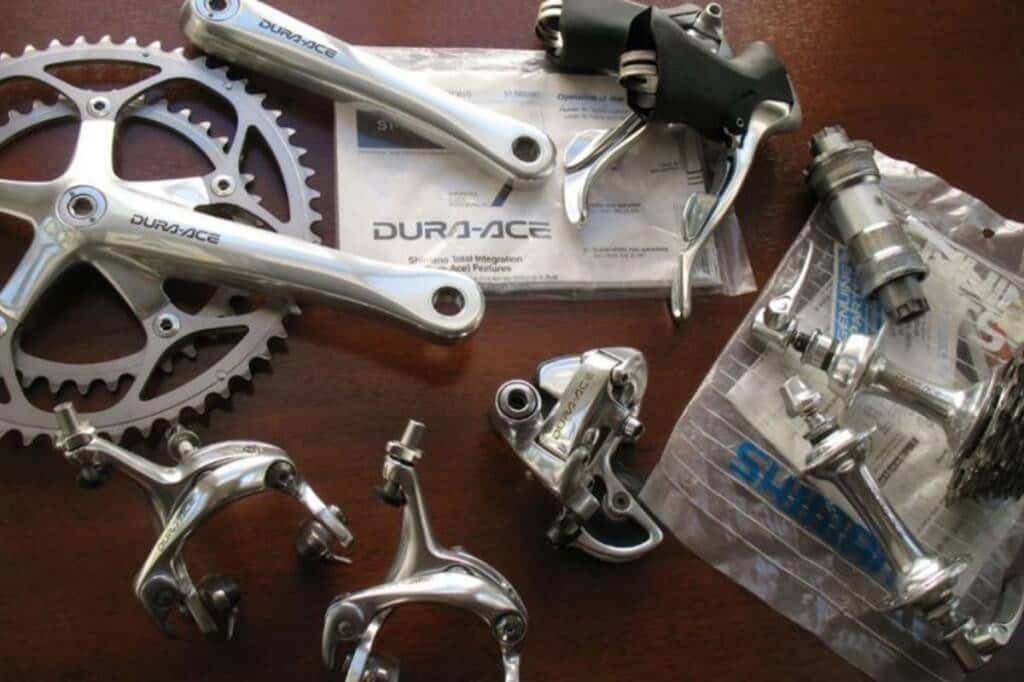 The 7700 series was in production from 1996 to 2004, and while the 9-speed groupset may have lacked the technological prowess of the 7400 series, or the refinement of its successor 7800, the fact that this particular Texan won the Tour on it did wonders in setting the tone for the groupset all riders wanted.

Since retrospective annulments of victories override memories, we have to turn to Alberto Contador’s victory in 2007 as the first time a rider officially won riding Dura-Ace. By this time, Dura-Ace 7800 10-speed had hit the market, characterized by its ‘100% power efficiency’ catchphrase. It featured the iconic Hollowtech II crankset ­– which accommodated a larger, lighter and stiffer bottom bracket axle – as well as improved ergonomics on the dual-control levers and of course a 10-speed drivetrain, offering a wider range of gears. 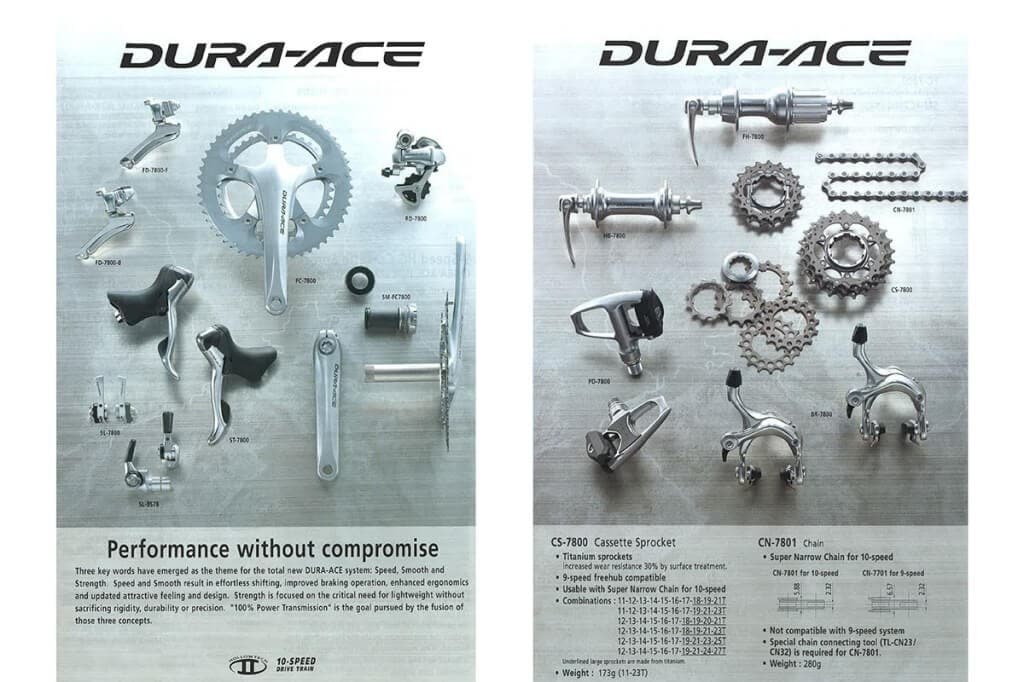 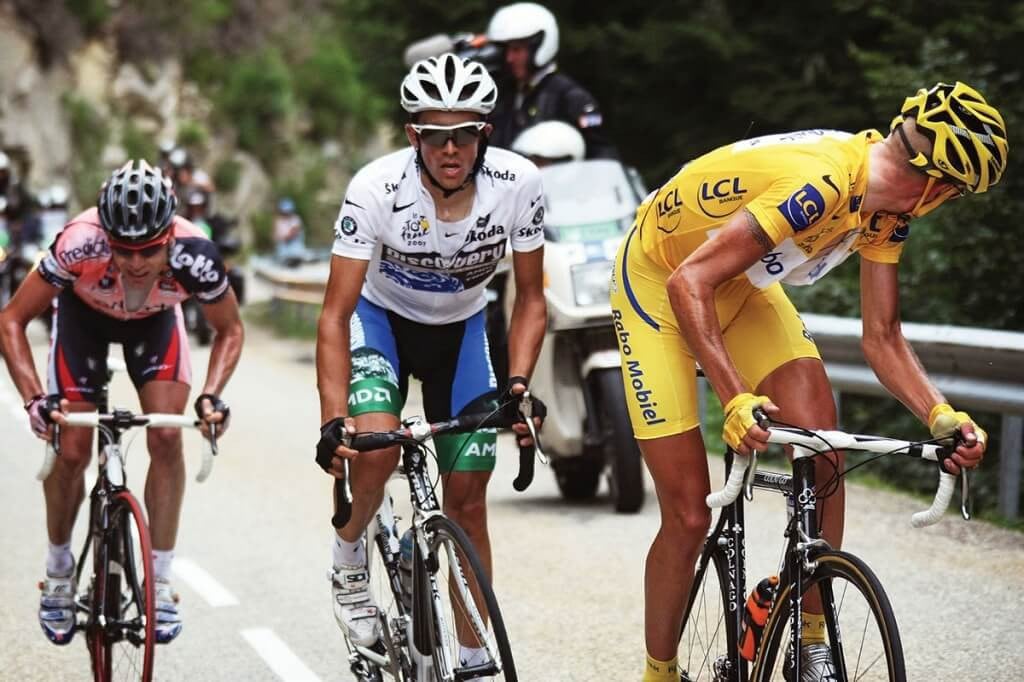 After wearing the white jersey for numerous days, Contador beat Rasmussen in his classic climbing style, winning the arduous stage to the summit of Plateau de Beille, before also depriving the Dane of the yellow a few days later. El Pistolero went on to bring the yellow jersey to Paris for his first of two overall victories.

After battling it out with Andy Schleck in the Alps, Cadel Evans finally took the yellow on the penultimate stage — a time trial — to become the first coureur ever to win the Tour using a Dura-Ace Di2 (Digital Integrated Intelligence) groupset. Shimano’s first electric shifting system offered an enhanced shifting experience over the old mechanical system. The shifting became more accurate, quicker and lighter, and with the wireless Di2 system in place, the need for shifting cable maintenance and replacement disappeared. It was also more apt to keep working under stress, so that Cadel didn’t need to worry about his gearing and could completely focus on riding the Time Trial of his life. The enigmatic Wiggins won both time trials in 2012’s Tour de France, which set him up nicely to become the first British winner of the Tour.

The race was totally dominated by Team Sky that year, with Chris Froome placing second in the final classification. For the new Dura-Ace 9000 11-speed series, the drivetrain was fully re-engineered across all systems. Shimano had been studying a four-arm crank for 3 years, and had been testing it for about 18 months prior to the Tour de France. The new four-arm design of the crankset put the strength where most of the pressure comes in a pedal stroke, thus improving efficiency as well as durability. New polymer coated shifting cables were also introduced for smoother operation. It certainly helped Team Sky, who totally dominated the race that year, with Chris Froome placing second behind Wiggins in the final classification.

2017: THE EMERGENCE OF DISC BRAKES

In 2017, the German powerhouse with the schöne haare won the sprint in Liège, his first of no less than five victories on Shimano’s R9170 disc brakes that Tour, which proved that there is definitely a place for a modern, safe braking system within the professional peloton. 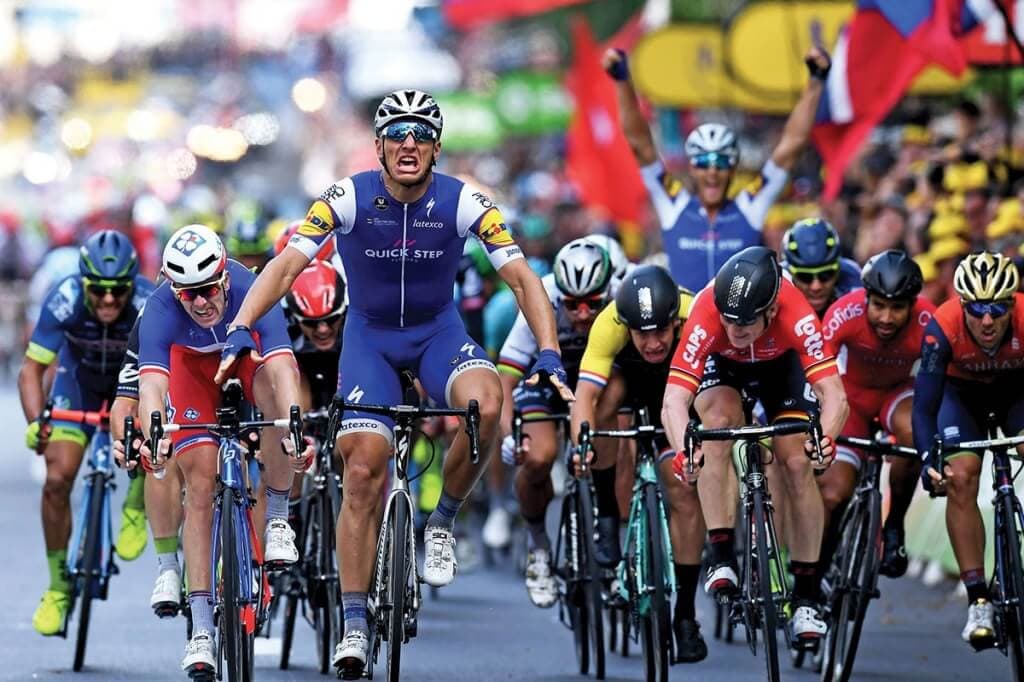 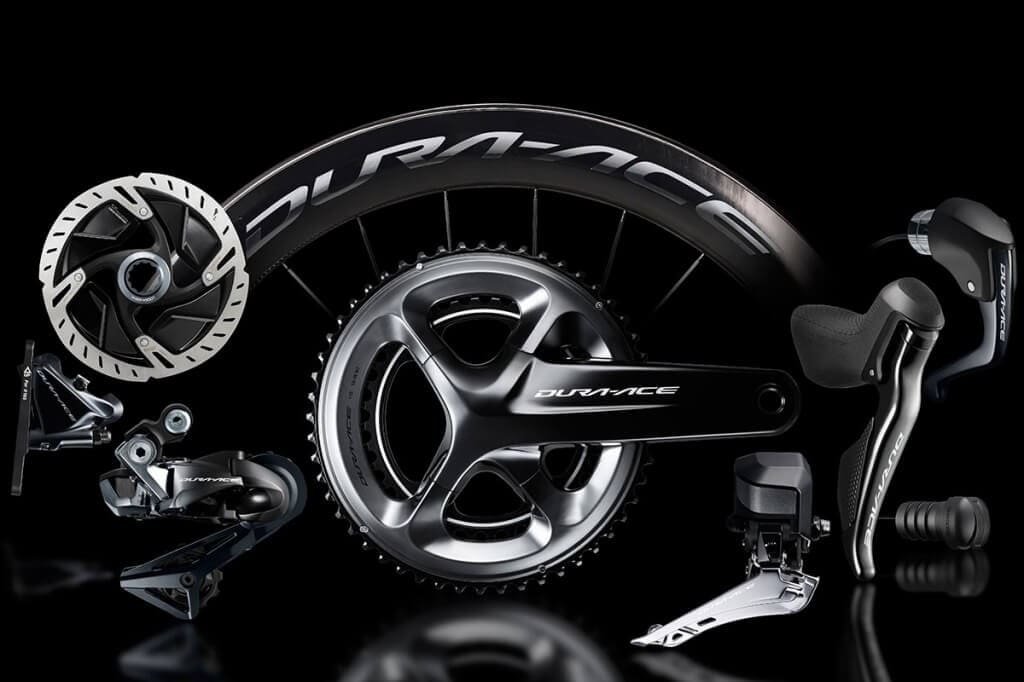 The R9170 was the first full-fledged Dura-Ace group with electronic shifting and hydraulic disc brakes, which made it easy to control braking in difficult conditions and apply as little, or as much, power as one needs to match any situation. The R9170 series comes with smaller, lighter calipers, and each disc uses a new configuration of Shimano’s ‘Freeza’ technology: a layer of aluminium wedged between stainless steel. The aluminum in the rotor, with its fins and larger surface area, draws away heat generated during braking and dissipates it. Disc brakes are an ideal way to implement an element of safety in the pro-peloton. Because as we have seen, while the material and componentry keeps evolving, the sport itself must not allow itself to be left behind, either in mindset or regulation. Here’s to a bright future.