As we head into the 2019 cycling race season things are already kicked into high gear for our Supercross friends. Supercross is one of the most demanding, dangerous and exciting sports out there. To be successful in the sport, you have to be prepared. Having the right race equipment and the right training equipment is a crucial aspect that can't be overlooked. 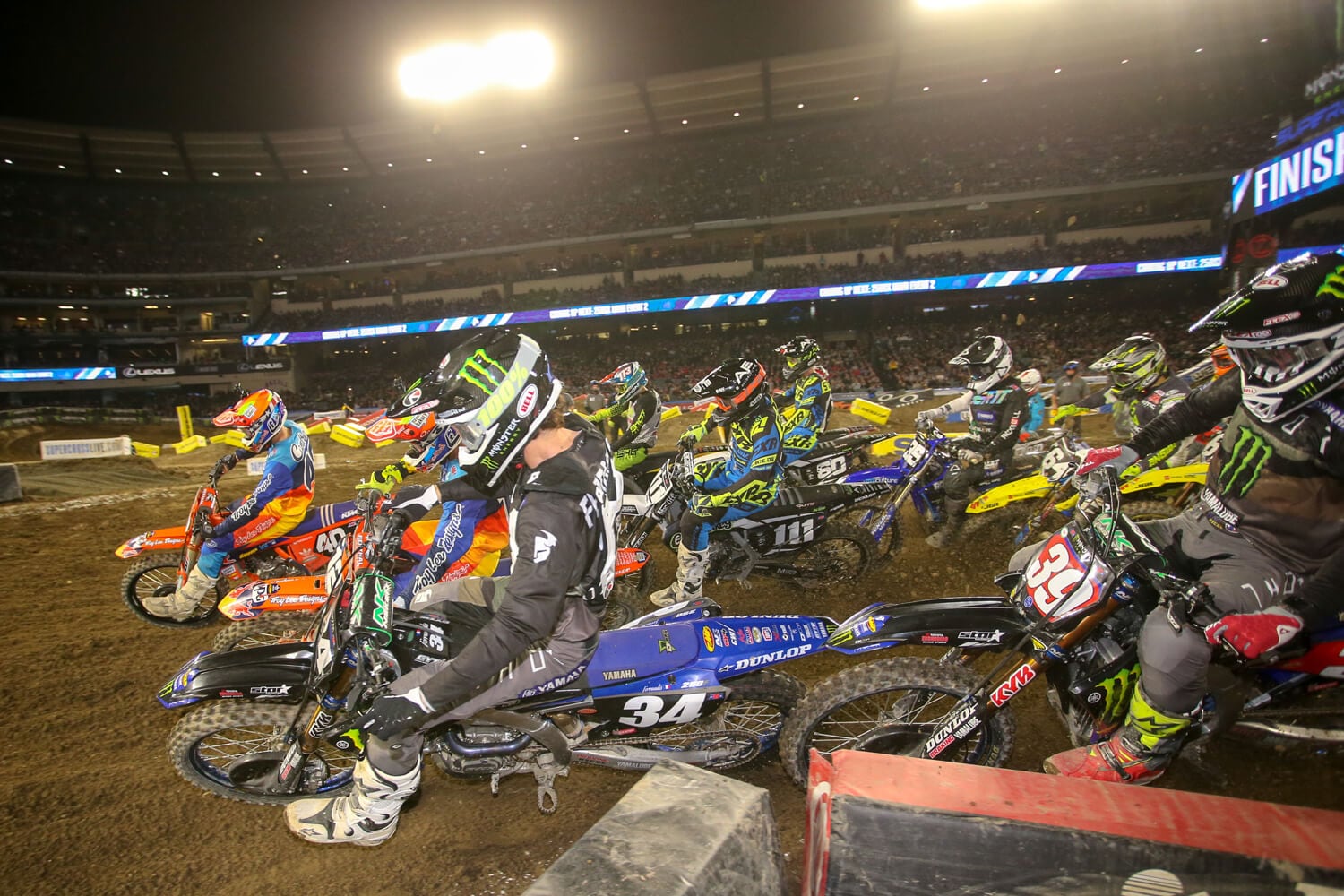 Here at Shimano we are privileged to be able to work with some of the best motorcycle racers on the planet. Thanks to the support of Sean Estes and the Specialized Bicycle Company we were able to provide top notch 'training tools' to a couple of our Shimano supported athletes at the recent Anaheim Supercross. We sat down with Justin Brayton, 450cc rider of the Smart Top/MCR/Honda Team and Dylan Ferrandis, 250cc rider of the Monster Energy/Star Racing/Yamaha Team and got the low down of what’s going on with these guys and what they think of their new road bikes. 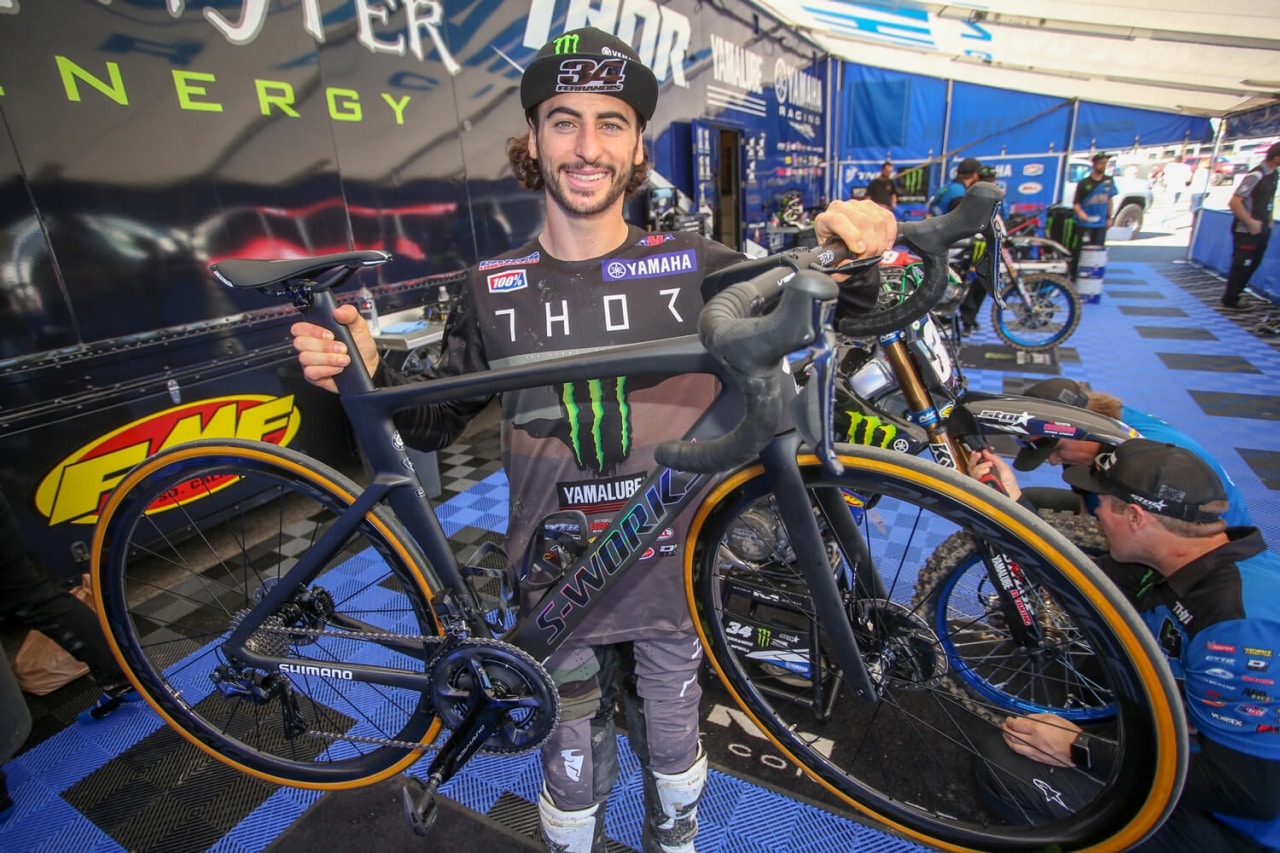 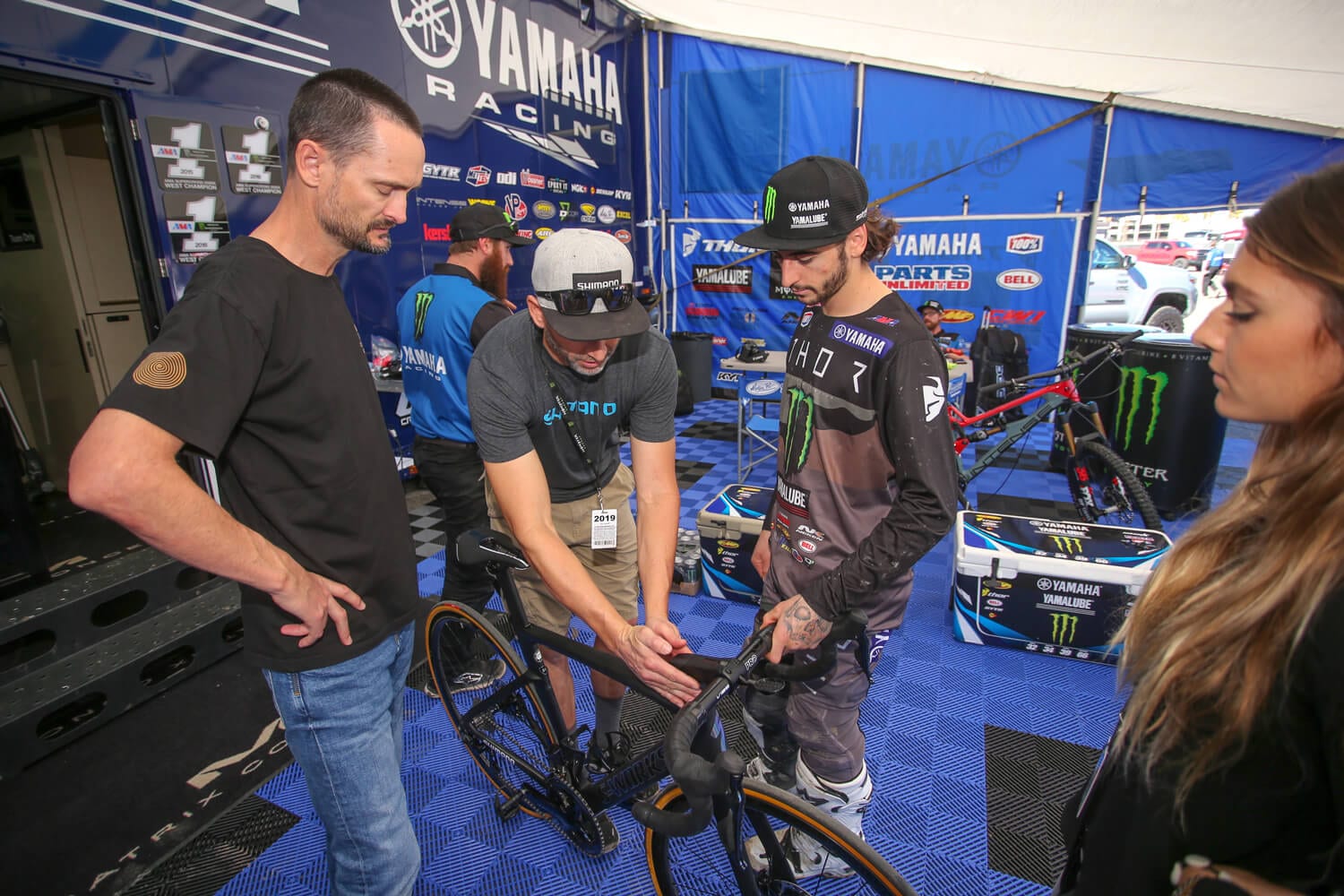 Shimano Sports Marketing specialist Joe Lawwill walks Dylan through his new bike while his agent and former Supercross racer Jimmy Button looks on. Joe has been running the Moto athlete program for the last 10 years, with his own roots running deep in the Moto world. When Justin isn't on his 450cc Honda, he will be training on his new Di2 S-Works Tarmac. 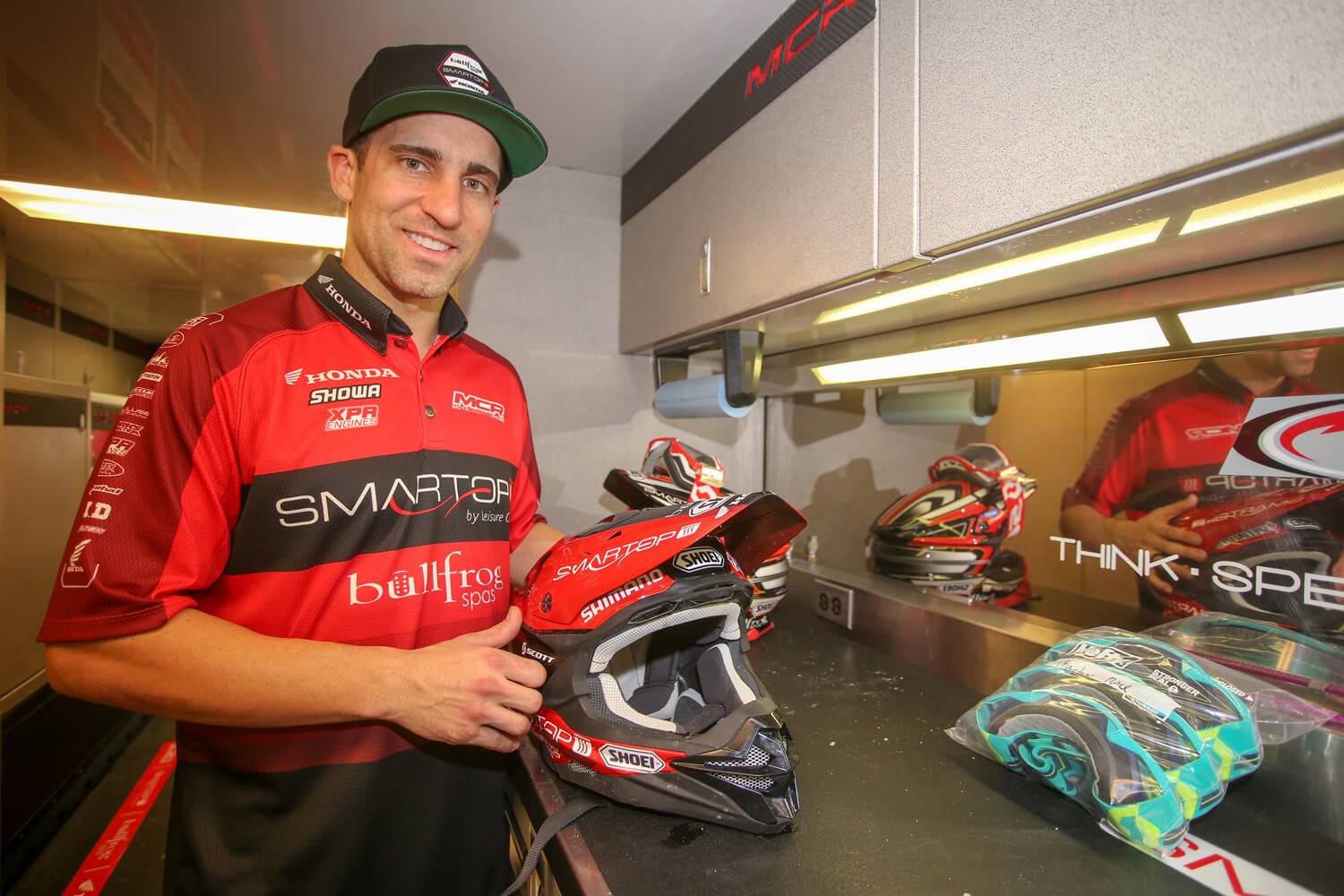 Justin has been a part of the Shimano Moto program for several years. Justin represents Shimano with a sticker on his helmet.

We are already a few races into the Monster Energy Supercross season and a lot of exciting race action has already taken place. After three races there has been a different winner in every main event in both the 250cc and 450cc classes.

How do you think things are going for you and how do you feel your offseason training went?

JB: The first three races have been good. Unfortunately, I’m not one of those three winners yet but I believe it’s coming soon. My offseason training was really good. I did a lot of racing around the World. I was able to win a third consecutive Supercross title in Australia, then went to Paris and got a second, then to Geneva and got a win, and also won in Italy the following weekend so combine that racing with a lot of cycling and some gym work I felt pretty good about my offseason.

DF: Things are going well for me, I am 3rd in Championship point standings right now and I have felt pretty strong on the first couples races. I had the best offseason I've ever had and I really feel I made a good step physically. It's helped a lot on a race day.

What are your goals for the rest of the season?

JB: First and foremost my goal is to make all 17 rounds and stay healthy, after that I want to be top five every weekend and if a win presents itself go for it.

DF: The goal is always to win, but to be consistent is really the key. A goal for me is to be on the podium every weekend, stay injury free and be on the highest step at the end.

How many days a week are you on the motorcycle once the season is underway?

JB: Typically during the season I ride two days a week.

DF: When the season starts I spend a bit less time on my motorcycle to make sure I fully recover in between races. I did the foundation work during the offseason and now the most important thing is be at 100% every Saturday night for the race. I end up on the motorcycle between two and three times a week.

How many days do you get on the bicycle for training during the season?

JB: I ride the bicycle three to four days per week. It’s almost an every day routine when I’m home and not traveling. I’m either doing a recovery ride or intervals depending on the day.

DF: During the season I do long distance bicycle training once per week and I do a short recovery ride after every high intensity training throughout the year. Sometimes I can be on the bicycle up to five times a week.

What about during the off-season? How many days a week do you ride a bike?

DF: It depends of what block of the off-season - the endurance period in October is the moment I spent the most time on my bicycle about four times per week with long distance sessions lasting around three hours long. I do one long distance ride every week of the year anyway.

How is your cycling time divided between mountain biking and road cycling?

DF: I do most of my cycling training on my road bike, outside and on the trainer. I keep the mountain bike sessions only for fun and free ride.

Do you use an indoor trainer as part of your regimen?

DF: Yes, I do have a trainer that I use quite a bit.

Do you use heart rate monitors or power meters in your training?

JB: Yeah, I use a heart rate monitor.

DF: I always train with my heart rate monitor, and I'm slowly getting used to the power meter function.

Do you use Strava?

JB: I do and sometimes it hurts my training cause I’m just chasing segments and I should be doing a recovery ride. We’ve all been there!

DF: Yes! But I keep it private and only have a couple close friends on it.

How competitive are you with other motorcycle racers when cycling?

JB: It’s always a competition to see who’s stronger especially my close friends that race. Whether we say it or not it feels good to be stronger than your buddies.

DF: I spend most of my training time alone and when I’m with other riders I try to stay focus on my program. Sometimes I can't resist to put some power on my pedals on a short climb to be the first on top though.

Do you ever compete in cycling events during your moto offseason?

JB: Yes I do. I really enjoy mountain bike racing. In Charlotte, NC we have a Wednesday night MTB series that I’ve done for years and also hit some regional events on the weekends as well. I’ve also competed in several endurance mountain bike races. I love it! My goal when I’m done racing is to be Cat 1 MTB National Champ.

DF: No, I never have but it is something I would like to do after my motorcycle racing career.

How big is cycling among other Supercross/motocross racers?

JB: It’s huge! A lot of Supercross racers love cycling. The crossover is so similar. The feeling I get riding a mountain bike is very similar to how I feel riding a Supercross track and I think that’s why you see so many moto guys race bicycles after their moto careers.

DF: I think every motorcycle rider uses cycling for training for sure. Supercross and motocross training is tough, high intensity and takes a toll on the body so we can’t practice all week. The cycling training is the best tool to keep in shape and recover.

Tell us a bit about this new road bike you just got. Did you specifically pick out any parts of it or just say send me a new road bike?

JB: Honestly I’m happy with anything Specialized and anything Shimano because I know it’s the best product. If I’m going to buy a bicycle it has to have Shimano on it. Even before I knew much about bikes the Shimano stuff always felt so much better so to now be sponsored by such a great company, I’m stoked!

DF: I am a huge fan of cycling, as a French person I never missed a Tour de France. I was born at the base of Mont Ventoux, a famous climb of the Tour, so I know pretty much every part on a bicycle. I have the bicycle I always dreamed to have and it is unbelievably efficient.

Although it should be pretty obvious that you have not got to where you are without lots of support along the way. Can you tell us a little bit about your support crew and who are the people/companies behind you that make this all possible?

JB: Yeah I’ve had a ton of support from a lot of different people over the years, but none of this happens without my parents driving me around the country racing as a kid. I knew I loved riding motorcycles but never knew how far it would take me. So to be here and have the support of great people and companies like Honda, my team owner Mike Genova, everyone at Fly Racing, Shoei Helmets, Adidas, Gaerne Boots, Specialized Bicycles, Shimano. It’s amazing to be with some of the best sponsors in the world and I’m very appreciative for everything they do for me.

DF: This is 100% true! I won’t be here without the help of my parents when I was younger, and now I try to keep my support crew as small as possible. My wife is the most important support and person for me, and then my coach, my agent, my mechanic and my team that’s all.

Any advice you can offer to up and coming moto racers in regard to using cycling as a training tool?

JB:  I highly encourage it. The bicycle can teach you so many about yourself that will really help you on the motorcycle. It’s a great training tool.

DF: I can say that using cycling as training tool is really important for motorcycle racers because we are always in a really high heart rate zone on the motorcycle. The cycling give us the opportunity to train in controlled heart rate zone to build the endurance and other zone that we can’t do on a dirt bike which makes the body more efficient.

JB: Just that I’m stoked to be riding and training on the best products in the business. If any cycling enthusiasts ever see me at a Supercross race come say hi and let’s talk bikes.

DF: Just to say a big thank you to Shimano for the support they give me to be able to train at the maximum level with my new DURA-ACE equipped Di2 Venge!

Connect with the guys on Social Media and follow along for the rest of the season! 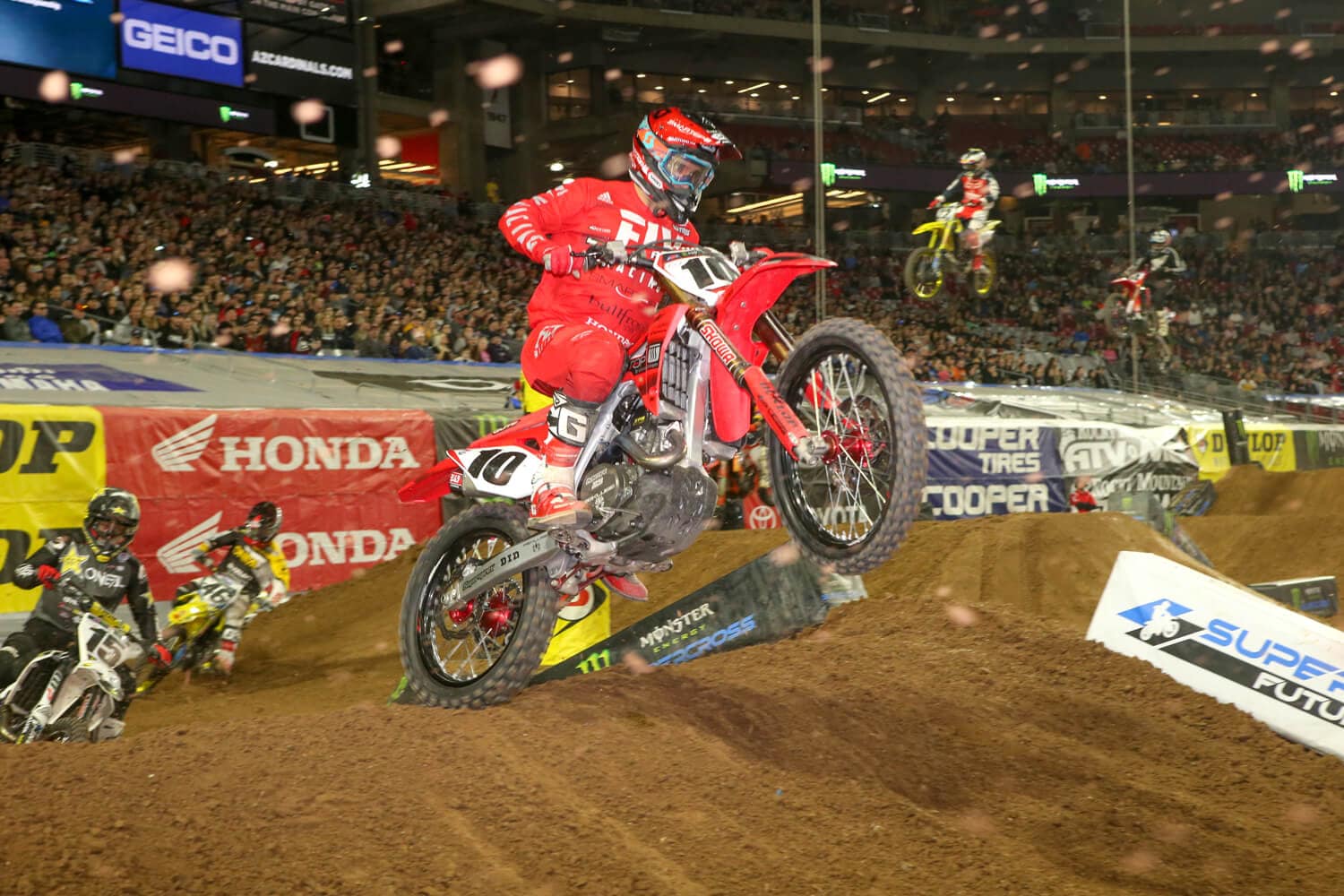 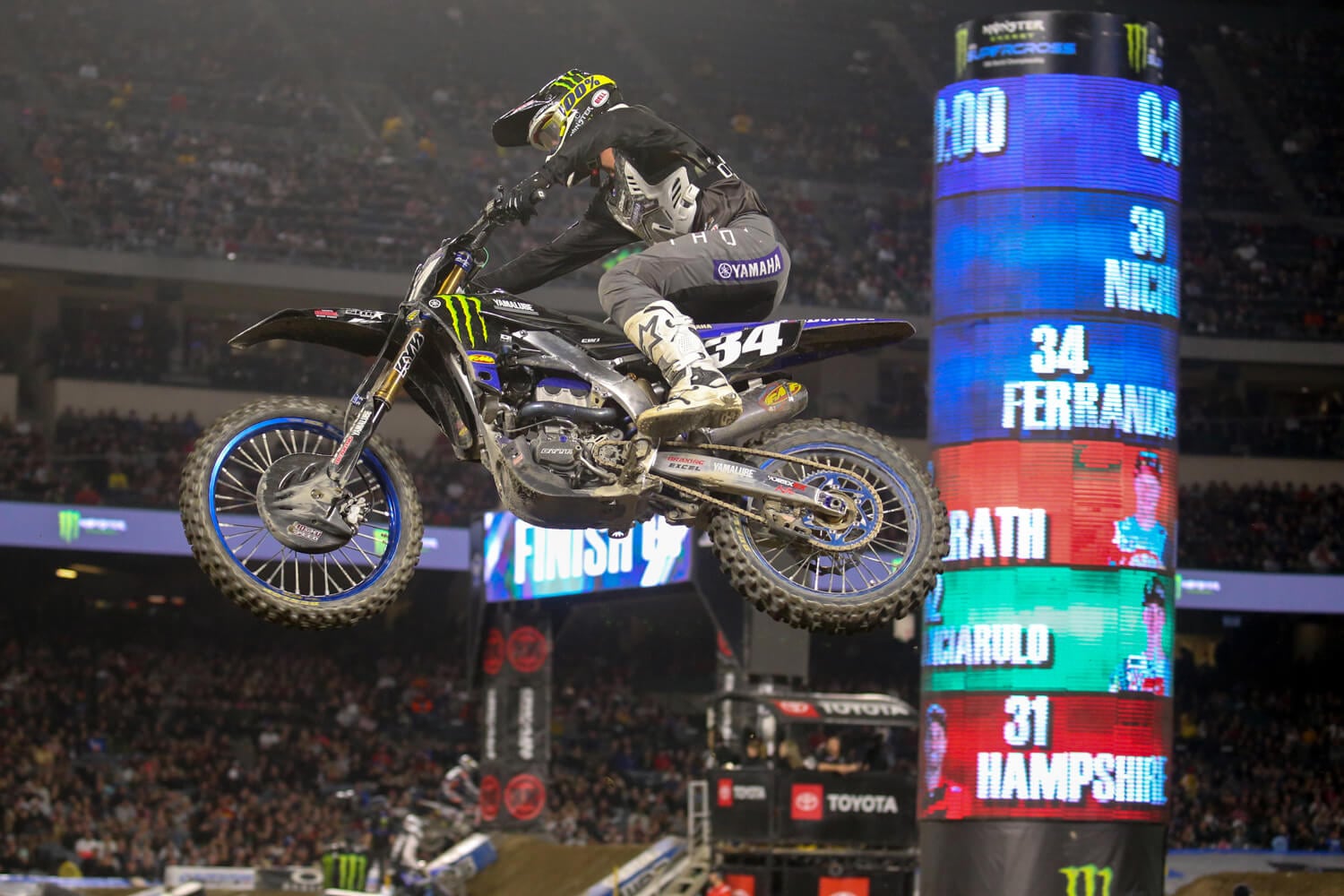