HOME > INFORMATION > NEWS > DANNY HART THE STORY OF A CHAMPION

Danny Hart; The Story of a Champion

In the second half of the 2016 World Cup season Danny Hart was a man on fire. Sweeping the final three World Cup rounds and carrying that momentum all the way to World Champs glory, he was unstoppable. Getting to that point has been a long road for him. He was catapulted into fame with a breath-taking run at the 2011 World Championships in Champery, defying the wet conditions to put an incredible margin between him and the rest of the field. Yet after that it took five years before he would once more stand atop a world-class podium.

This winter, Danny joined the Shimano family so we caught up with him to find out more about the long road back, how he can follow up such an incredible season and how it has been getting used to our Saint drivetrain and brakes this winter. 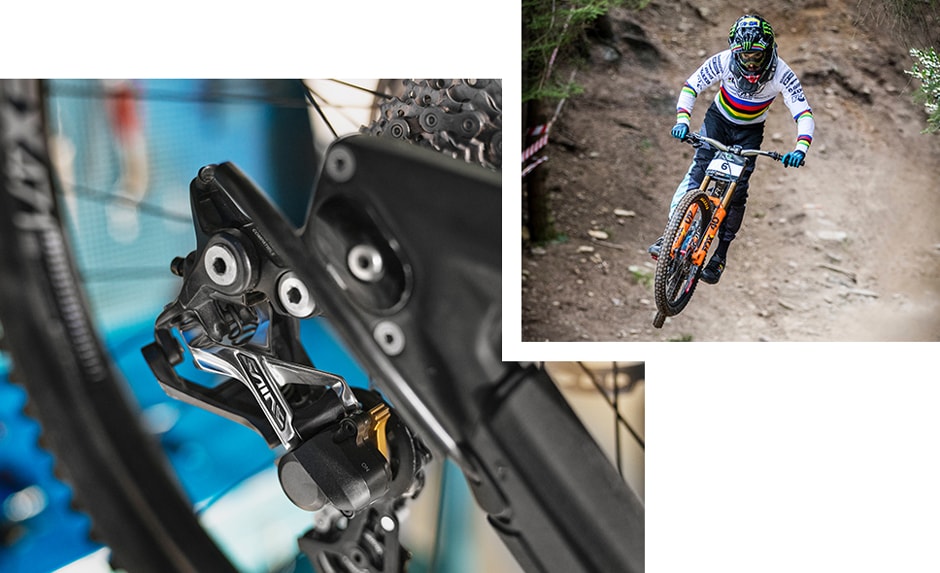 There were five years between your wins in Champery and Lenzerheide, what happened in between the two?

Well, after Champery it was a bit of a whirlwind and I wasn't really expected to win anything like that year, with it being only a second year as a senior. After winning that, and in such dramatic fashion, it was a bit of a whirlwind, I was traveling around a lot. I was in Vegas for Interbike, I was here there and everywhere, and I think I just let myself go a little bit I guess, with all the limelight if you like and being young. Because of that my training wasn't the best, and then when I came round to the 2012 season, I wasn't in perfect shape, I was a little bit heavier than I had been, but I was still putting in good results. I was on the podium most races, until I dislocated my shoulder.

That can be quite a difficult injury to recover from.

It didn't allow me to race World Champs, and the last two World Cups that season. I made quite a mess of my shoulder, so I had to go away and have surgery. When I got back on the bike, I felt normal and good to go, like I could just crack on where I left off. That didn't happen. It took me a while to get back to the results that I was getting, so that was quite hard to take. I got on the podium a couple of times but never as much as I was prior to the injury. Then I went to Mondraker, and at my first World Cup with Mondraker, I got on the podium in Lourdes, so I was like, "That's good." Then the rest of that reason just didn't pan out like it started, so that wasn't great. For 2016 I had a year in hand on the bike, getting to know it, I guess. Everything just changed and I started getting back on the podium consistently, and then winning those races at the end of the year. 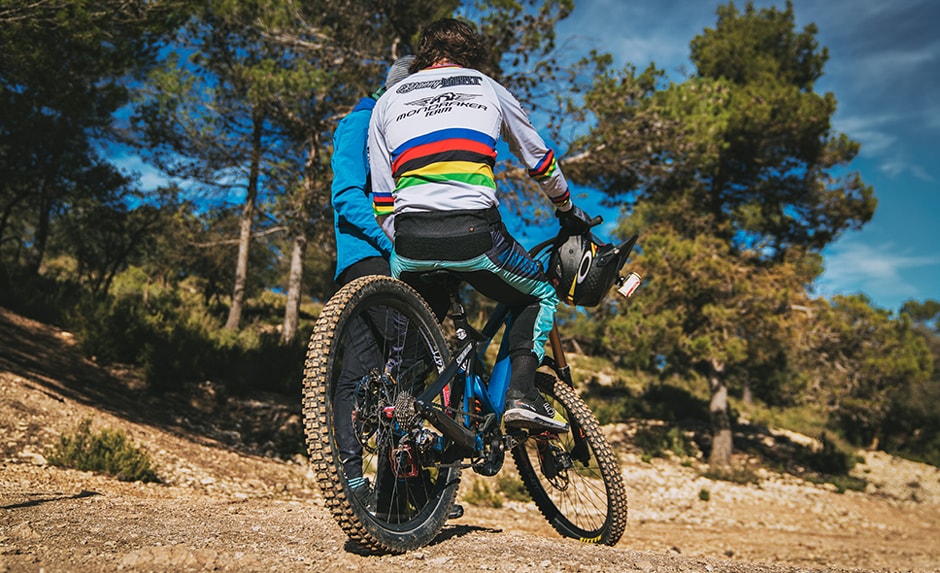 What changed from you? What kind of happened in Lenzerheide that maybe hadn't happened up to that point for a while?

What's funny is after I went to Schladming to ride and race the iXS Cup, and I hurt myself in Schladming and had to fly home, and leave the camper and everything in Austria. I flew home and went to see the specialist and he said, "You've broken a bone in your thumb." I couldn't race at Schladming, and fter that I had a couple of weeks off so I stayed at home and just did rehab on my hand. I didn't ride the downhill bike for what must have been three weeks. I went to Lenzerheide with an open mind really, just seeing if I could ride. At first, it was really sore, but it came good in the end. It was funny, because I hadn't ridden for three weeks before that and I went there and won, so it was crazy really. I guess expect the unexpected. I didn't really ride as much in Lenzerheide as I would at a normal World Cup. Then I went on to win. I don't think anything really changed, I was just getting on the podium consistently. When you do that, I think a win is there or there abouts as the level is so high.

So after a perfect finish to the 2016 season, does that give you confidence or put you under pressure coming into the new season?

I believe it can work both ways. I don't feel pressure, because I was just riding. It wasn't anything different that I was doing. I was just riding, and then I was winning. So, that was good, but then obviously, there is a bit of pressure in another respect, that I was winning everything. You're not going to win them all. There is going to be a point... I've been riding a lot in the winter, and just been having fun, and I've been riding fast so. When I'm having fun, I ride fast, and that's what I was doing last year. There was never anything crazy that changed, it was just like a ball rolling and I had confidence, and yeah that was the difference. Maybe it's wrong to say this, but I think the pressure is on other people to try and beat me. Not the pressure on me to beat them, but I don't know...

How has the change to Shimano been for you this winter? Has that been an easy transition?

I guess it was a little bit of a big deal, because I've different brands for so long but I was never worried because I know they have been one of the top brands out there for so long, so it's was always going to be good. We have had to make a few little tweaks, but nothing drastic. The brakes are good. I haven't had to touch them since putting them on my bike. I was a little bit nervous changing, because as I say I've done a lot on the brakes that I was using before. But yeah, it's been really good.

Going back to your Champery World Champs run a lot of people looked at that and was like "Wow, that's a really out of control, wild run." But it wasn't actually that out of control. It was actually a very measured, controlled run from you. So having that confidence in your brakes would seem to be super critical for that kind of riding style? 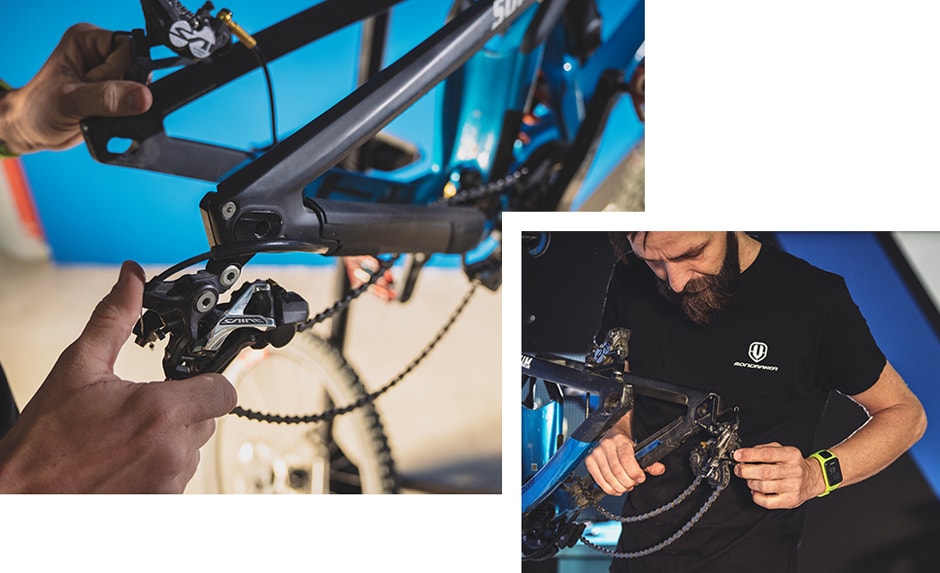 So if we fast forward to October this year, looking back at the season, for you to be happy, to say "You know, okay I'm happy with that season." What would that look like for you?

Well, the World Champs this year is going to be a really tough race, with it being in Cairns, so that's a big one. To defend rainbow stripes there, would be unbelievable. To win the World Cup overall is a big goal of mine. Last season, at some point in the season, I was I think, around 200 points down, and I came back to less than 30 points of winning it. I know you can say "shoulda, woulda, coulda" but I had a couple of issues in qualifying. In Lourdes I scored no points with a crash. Then, in Fort William I scored no points with a crash. Cairns, I just didn't show up. So, if you look at these races, if I had just done some damage limitation on those races, I would be in a much better position at the end of the year. But, then if you look, I didn't have the best qualifying in Andorra. If I'd qualified fastest in Andorra, I probably wouldn't have that third win, with the weather being like it was...