Take an inside peek at the thrills and spills encountered by SHIMANO Neutral Service at UCI Road World Championships.

When racers at the recent UCI Road World Championships spotted the widely recognized blue color of SHIMANO, it signaled to them that help is near at hand. SHIMANO Neutral Service was there for all riders, regardless of racing category, country of origin or groupset equipped on their bikes. If a rider was sprawled out on the pavement after a hard fall or needed a wheel change after a flat tire, SHIMANO was on the job. 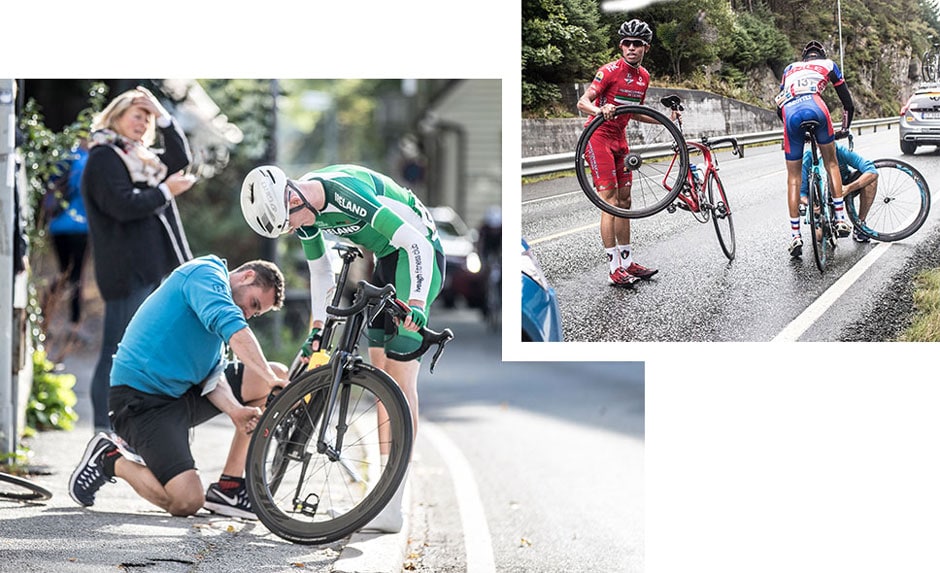 IT TAKES A BLUE ARMY

When covering such a large event with 12 different competitions, it literally takes an army to make sure each and every rider makes it to the start line, as well as the finish. There are 14 people on site to do the work, six of which are mechanics. They are responsible for four SHIMANO cars, two motorcycles, and a truck. 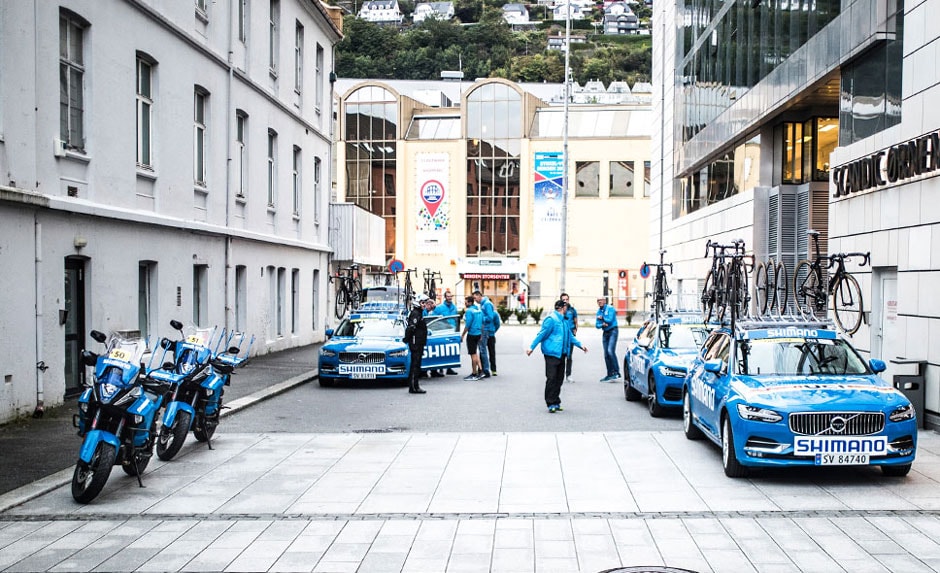 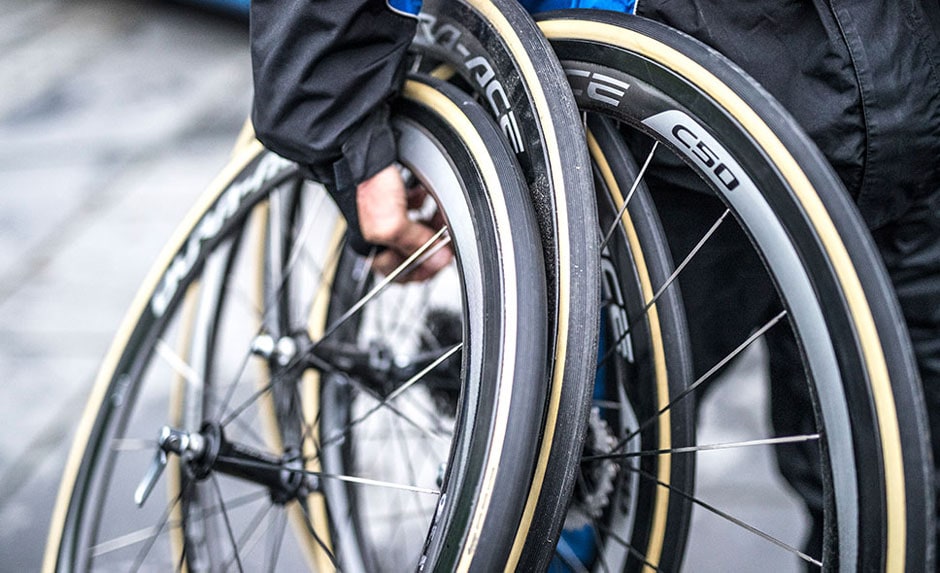 Each race day began with a constant flow of riders passing by SHIMANO Neutral Service located in the start zone. They assisted with everything from shifting adjustments to bikes damaged from flights. Even stars like Rigoberto Urán Urán came by to have his broken shifter replaced. Just after him was a rider from Hong Kong who came to borrow a SHIMANO bike after his went missing on a flight. 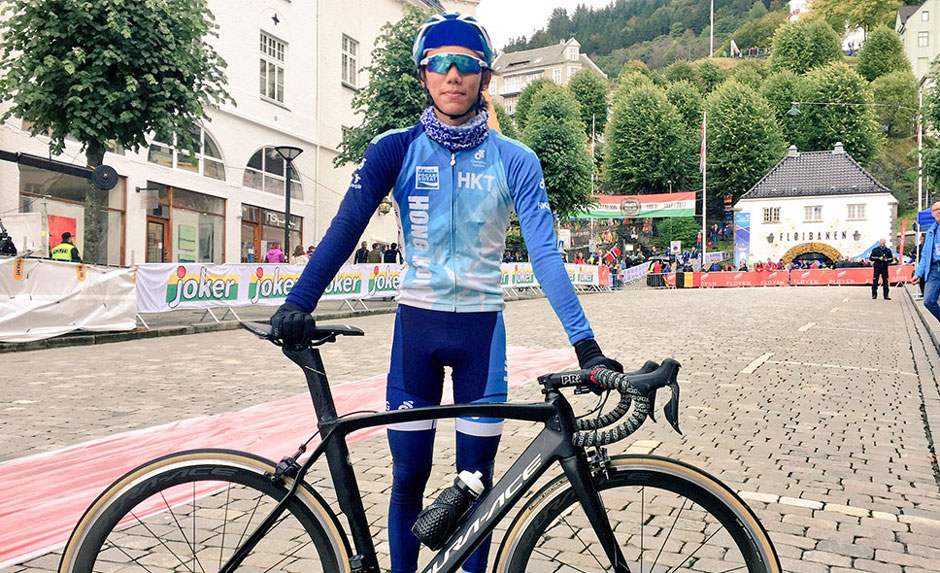 For the time trials, SHIMANO used their cars as follow vehicles for those smaller teams that didn’t have any car at their disposal. SHIMANO was also called in to help countries whose riders’ start times were too close together.

During the road races, SHIMANO Neutral Service helped with everything from flat tires to quickly getting riders up and running immediately after a crash. “This job was most challenging in the junior competitions, where they race on the rivet from beginning to end. This causes many of them to hit the pavement at some point,” explained Joost Hoetelmans (Road Racing Sports Marketing Officer). 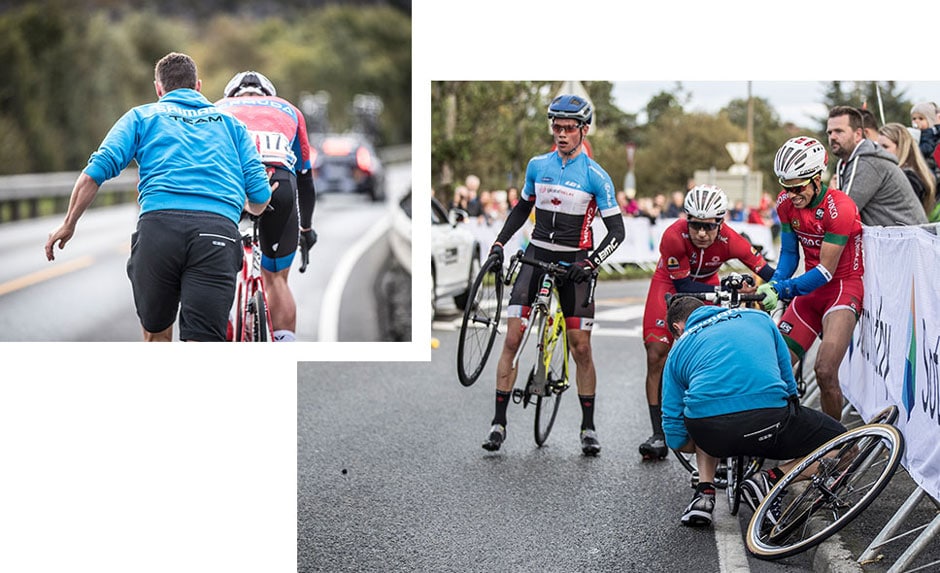 In the men’s elite race, SHIMANO brought a hard-fallen Mathew Hayman, along with his split-in-two bike, back to the Australian Team tent where he could get immediate medical attention.

Oddly enough, according to Hoetelmans, spills were not the most stressful moments for the blue army. “On two days, there was a junior race that ended at 12:30, with the next category starting at 13:30. This gave us 45 minutes to change 40 cassettes. And then there were the two girls from Ethiopia we assisted who didn’t know they needed a junior-specific cassette.”

“The first thing we do after each race is search out riders (by their race number) to collect what you lent out such as bike or wheel. That means chasing one guy down from Eritrea, another from Egypt, and so on,” explained Hoetelmans. After a thorough washing of all material including cars and motorcycles, it’s time to prepare for the next day. 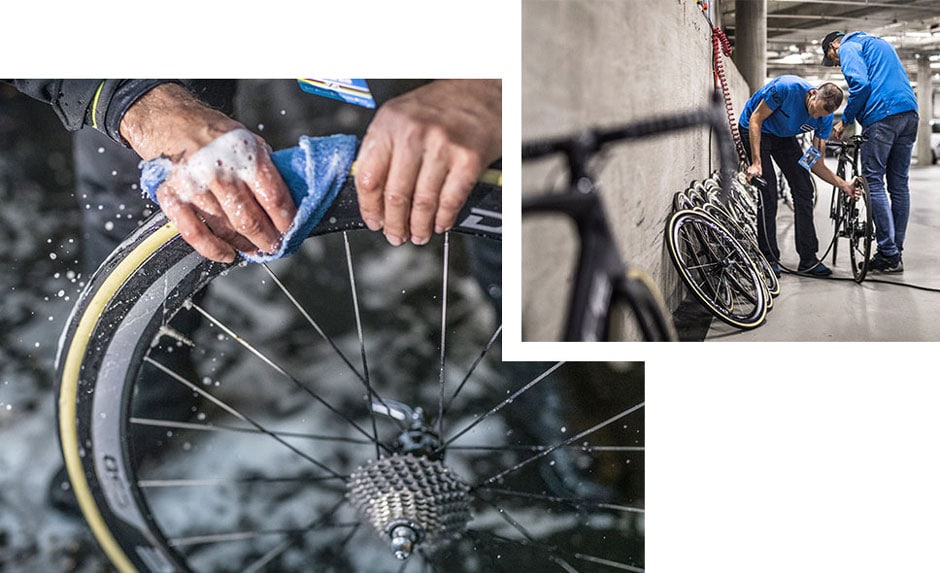 Looking back at the nine days of events, Shimano easily assisted at least 40 countries in one form or another. When Hoetelmans was reminded of this extraordinary feat, he mused, “Yeah, We did a great job, but it’s also like always…it’s just what we do. That’s what Neutral Service is all about.”

Check out our documentary following the SHIMANO Neutral Support team at the Road World Championships in Bergen 2017.