On March 5 at 4:25 Alaska time, Kurt Refsnider became the first rookie to win the overall Iditarod Trail Invitational 350 race. Negotiating a snowstorm that deposited a foot of new snow, followed by a notable wind event and capping off the race with over eight hours of negative 45-degree temperatures, the Arizonan pedaled and pushed his bike over the Alaska Range to finish first in four days, two hours and 25 minutes. 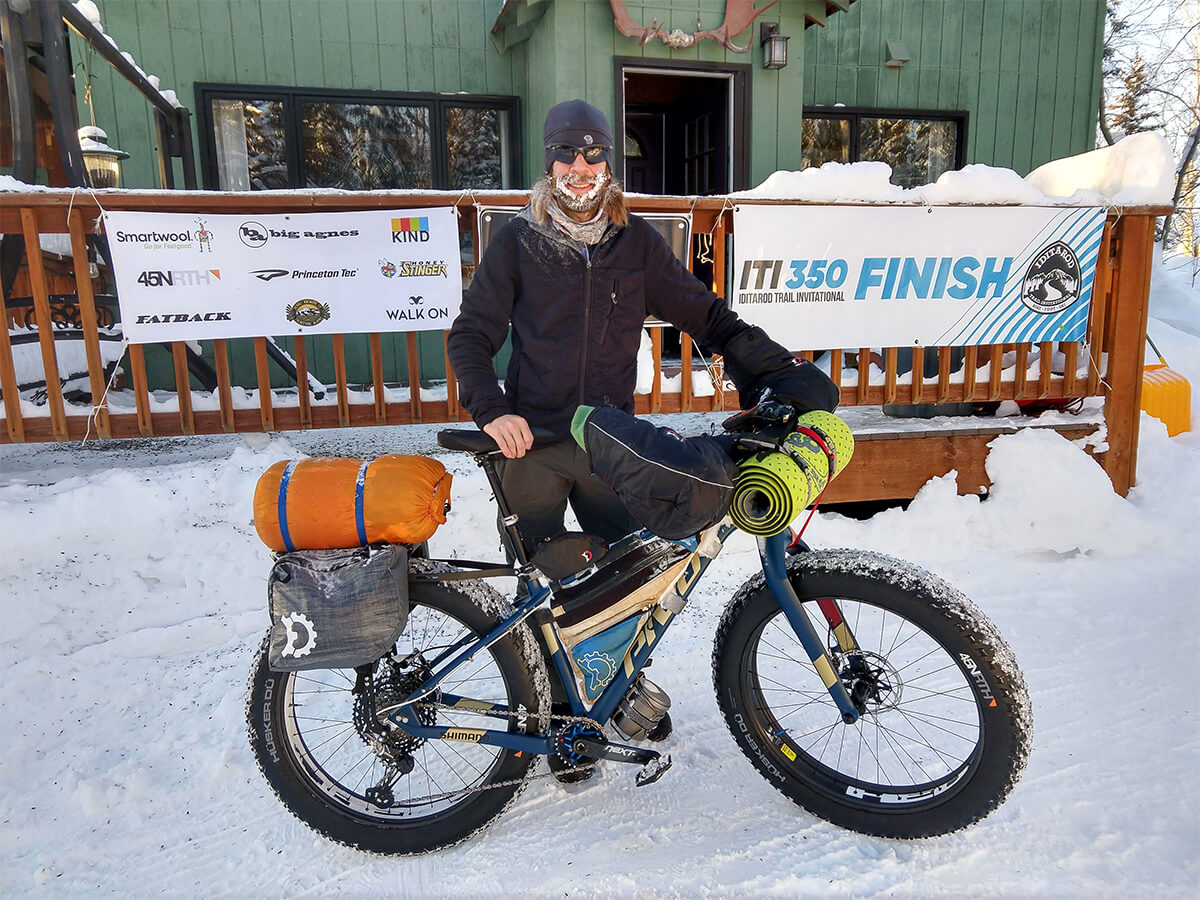 The Iditarod Trail Invitational (ITI) is a 350- and 1000-mile race following the iconic dogsled race course from Knik, Alaska to the 350 finish in McGrath and 1000 finish in Nome, Alaska. The route is only made possible by light snow machine traffic that packs the seasonal route. In crossing the Alaska Range, the trail follows frozen rivers and swamps up broad glaciated valleys. Racers must travel self-supported between checkpoints spaced roughly every 50 miles where moments of warmth are relished. Kurt is no stranger to self-supported, multi-day bike racing; in over a decade of ultra-racing, he has accrued a notable resume of ultra-endurance racing including racing the Tour Divide three times and winning once; and holding the record on the Arizona Trail 750 and 300, and racing the 750 twice and the 300 seven times, and just last year won the Colorado Trail Race. However, the Arizonan’s ultra-endurance racing was limited to dirt until just over a year ago which is one of the more impressive aspects of his ITI victory. 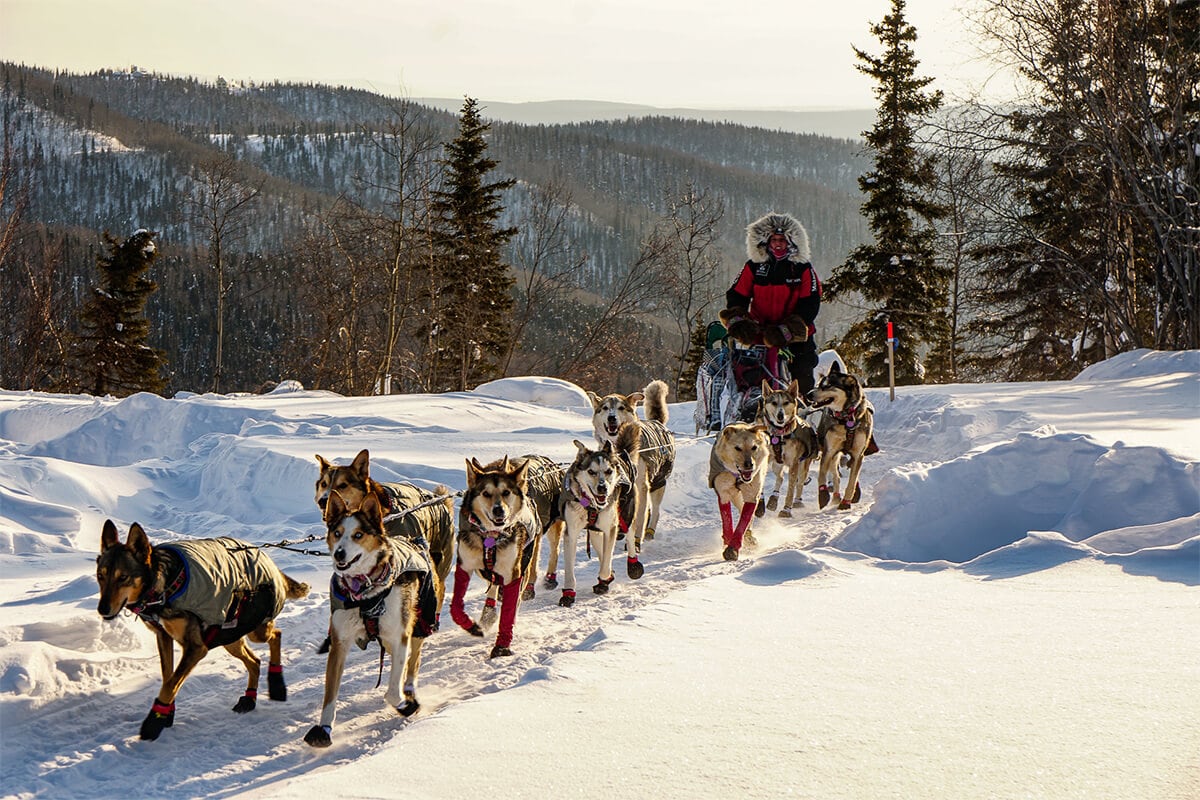 On Christmas 2018, Kurt’s good friend and teammate Kait Boyle, was in a horrific car accident that landed her in the ICU in eastern Idaho with a handful of emergency surgeries to repair a shattered pelvis and sacrum. Kurt drove to Idaho to help out, and after a few days and some delirious prompting from Kait, Kurt found himself borrowing winter cycling gear, a fat bike, and getting a quick tutorial on winter fat biking before entering and proceeding to win the 200-mile Fat Pursuit race in early January. Kurt’s result automatically qualified him for the 2020 Iditarod Trail Invitational race. Fast forward a year and Kurt returned to Idaho, this time with his own fat bike and winter gear, to train and race in winter to prepare. He spent the better part of January in eastern Idaho seeking the coldest, snowiest conditions to test gear, fueling strategies, and systems for staying warm, dry and comfortable. He raced the Fat Pursuit 200-kilometer distance in a blizzard and again won, attributing his success to proper tire choice and smart pacing. 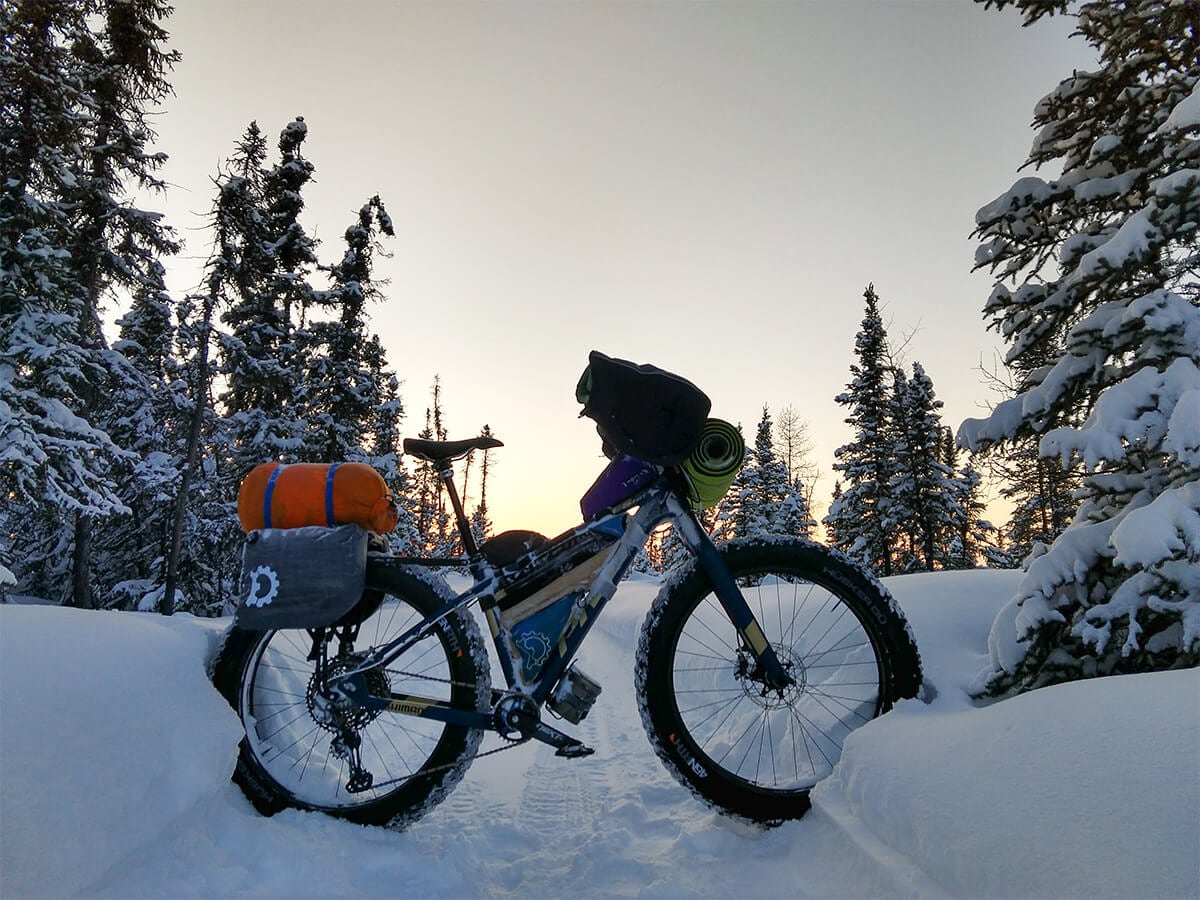 Kurt arrived in Alaska a few days before the race and with nervousness that only grew as the short-term forecast became more clear. Conditions that would make the race considerably more difficult than average were likely: a snowstorm to start, followed by a strong wind event that pushed the warmer air out and ushered in bitterly cold Arctic air, bringing a 50 degree temperature swing in 24 hours - from about twenty degrees and snowing in the first 24 hours to -30 degrees and clear in the following days. These conditions, coupled with the new landscape, remoteness, and unfamiliar racing tactics caused Kurt to feel an unfamiliar sense of nervousness and uncertainty leading up to the start. But for Kurt and so many of the folks who line up at the start line of the ITI and similar style races, the unknown and personal challenge is inspiration in itself for taking on the challenge. For most racers, the race is a race for oneself - to face a great challenge and meet it head on. And historically, to win the ITI, it was preached that one must first race it for the experience before having the familiarity and experience necessary to win overall. 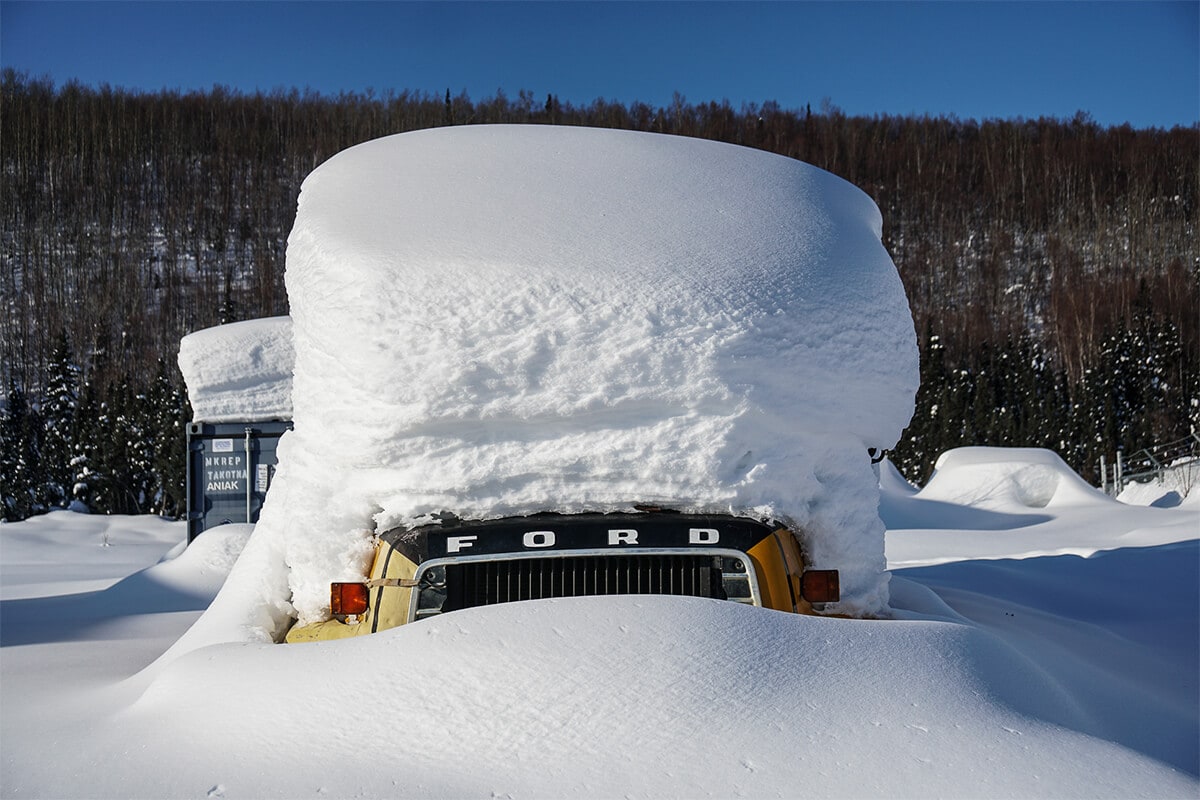 This year, 76 racers toed the starting line: 44 on bikes, 27 on foot and 5 on skis. Fifty-two people were headed for the 350 finish line in McGrath with an additional 24 heading to the 1000 mile route finish in Nome. The 350 field included last year’s champion and two time finisher, Tyson Flaharty, and past repeat podium finisher Clinton Hodges, as well as six-time winner Pete Basinger. Kurt describes the dynamic at the front of the race:

I spent the entirety of the race at or near the front, hopping back and forth with veterans Tyson Flaharty and Clinton Hodges, trying my best to conserve energy and take good care of my body. At times, two or three of us moved together through particularly taxing sections - miles of unrideable drifts and through heavy winds and occasional zero visibility in the mountains. And at other times, we were strung out over a few miles, all in pursuit of one another and pushing hard at a whopping 5 or 6 mph. The elastic finally broke 50 miles from the end when I managed to get away from Tyson and Clinton with a sustained, hard attack on some delightfully firm trail across a long series of swamps. After just over 4 days of racing, I rolled into McGrath alone for the win, becoming the first rookie to ever win the overall title. 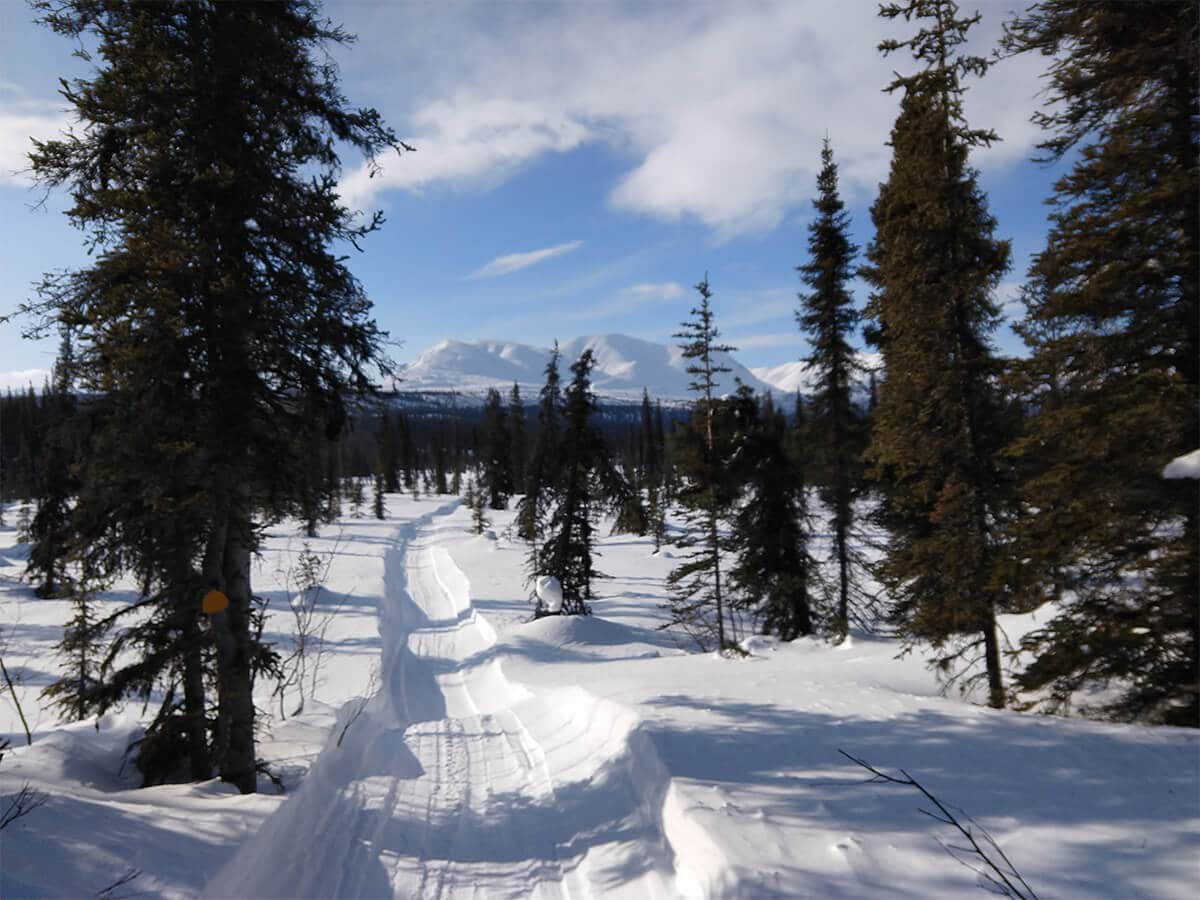 When asked how his mindset contributed to his experience, he attributes his lack of perspective as a sort of blessing in disguise. To Kurt, the day and a half of 50 mph wind gusts and Arctic temperatures could just be “normal” for this part of Alaska; he just didn’t know any differently. Aggressive moose, sleep deprivation, and a competitive lead group added to the challenge. 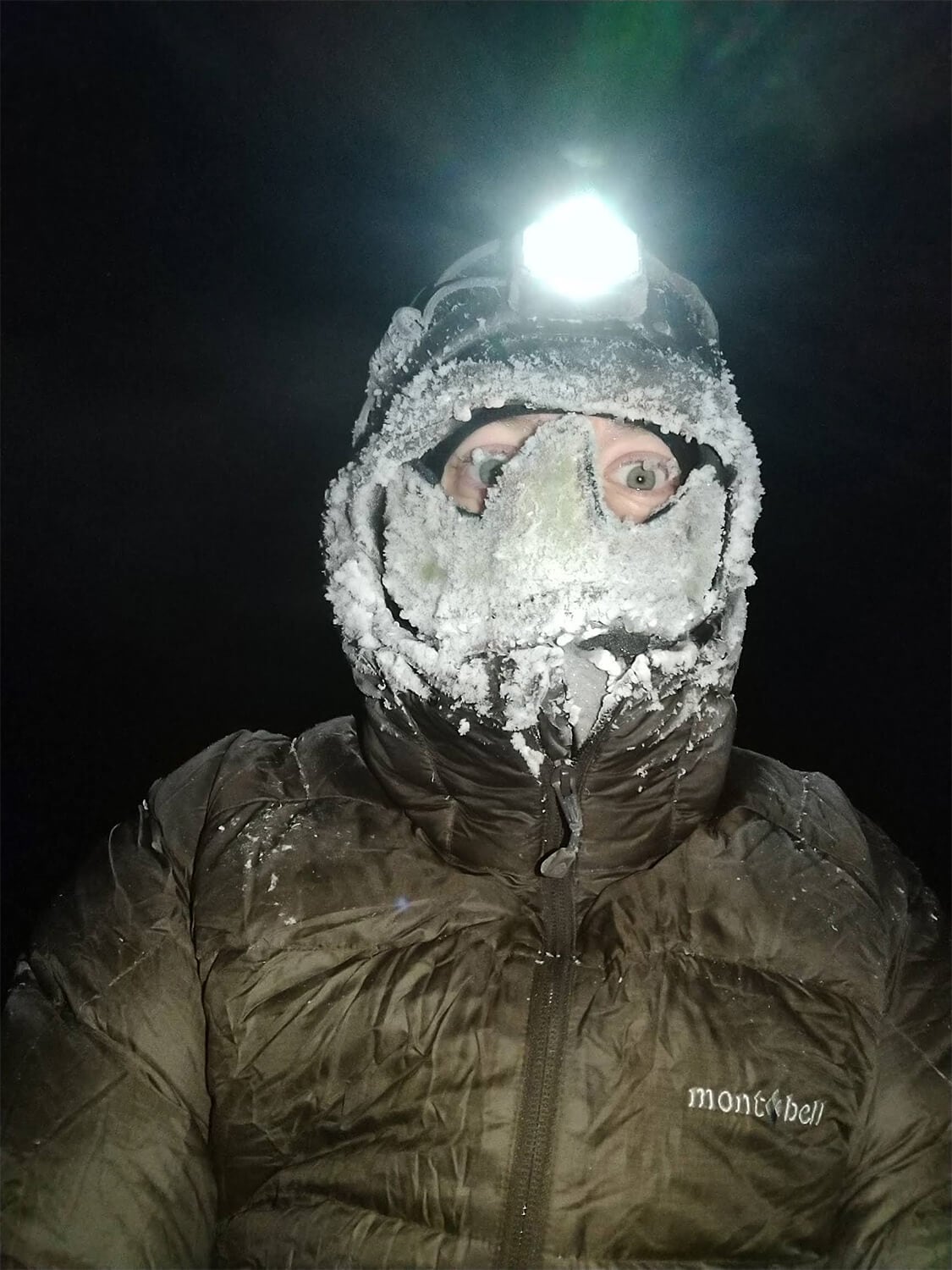 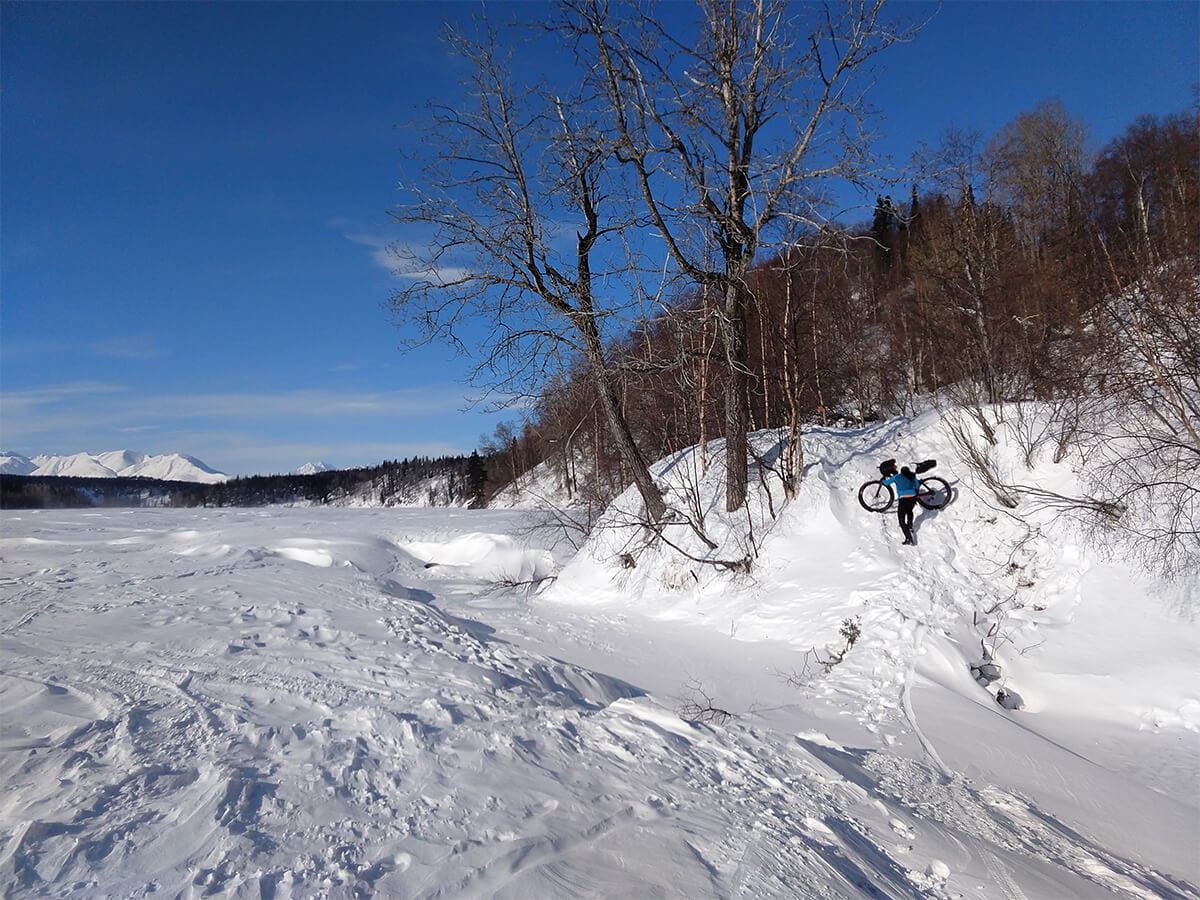 Unlike during dirt ultras, Kurt relied on the warmth of checkpoint shelters as opportunities to sleep. This strategy made him remain awake for the duration of travel between checkpoints and manage his energy accordingly in order to remain functioning and cognizant. The changing landscape, moving through an incredibly wild place, and amazingly encouraging volunteers at checkpoints and lodges every fifty or so miles added inspiration to the challenges he faced every mile. By the time just over four days had passed, Kurt had slept a total of 9.5 hours - none the first night, then six hours the second night, two the third and one early in the morning of the fourth day. So much time awake and moving has its rewards, too. He saw a wolf, bald eagles, bison, and countless moose. He got to travel across a landscape that is otherwise inaccessible by bike the rest of the year. He experienced sunrise while pedaling solo along the Kuskokwim River and watched light change over the peaks of the Alaska Range. And after enduring fifteen hours of pushing his bike on flat ground in -40 degrees due to unrideable soft snow, he relished the final mile into McGrath when he realized he was actually going to take the win after racing with some incredibly talented and enjoyable competition for four days. 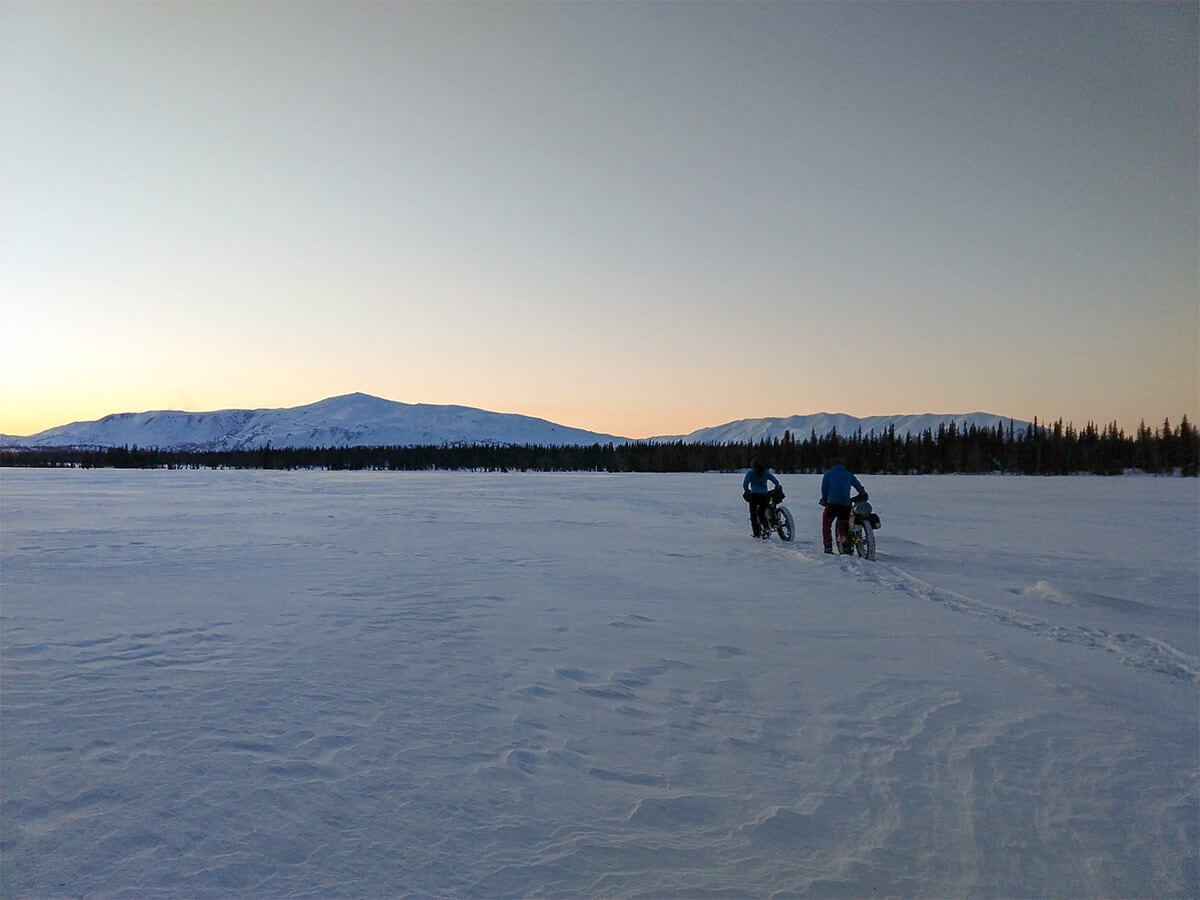 After Kurt’s finish, racers continued to trickle into McGrath for over a week. It is actually quite inspiring seeing the incredibly diverse backgrounds of these Ultra-Endurance athletes. Although the event is a race, much of the field is composed of people who are there to push themselves toward meeting a great challenge of completing the race. In that way, for most it is more of a race against oneself and the clock. The other racers add motivation and inspiration for tackling the challenge in a group setting. 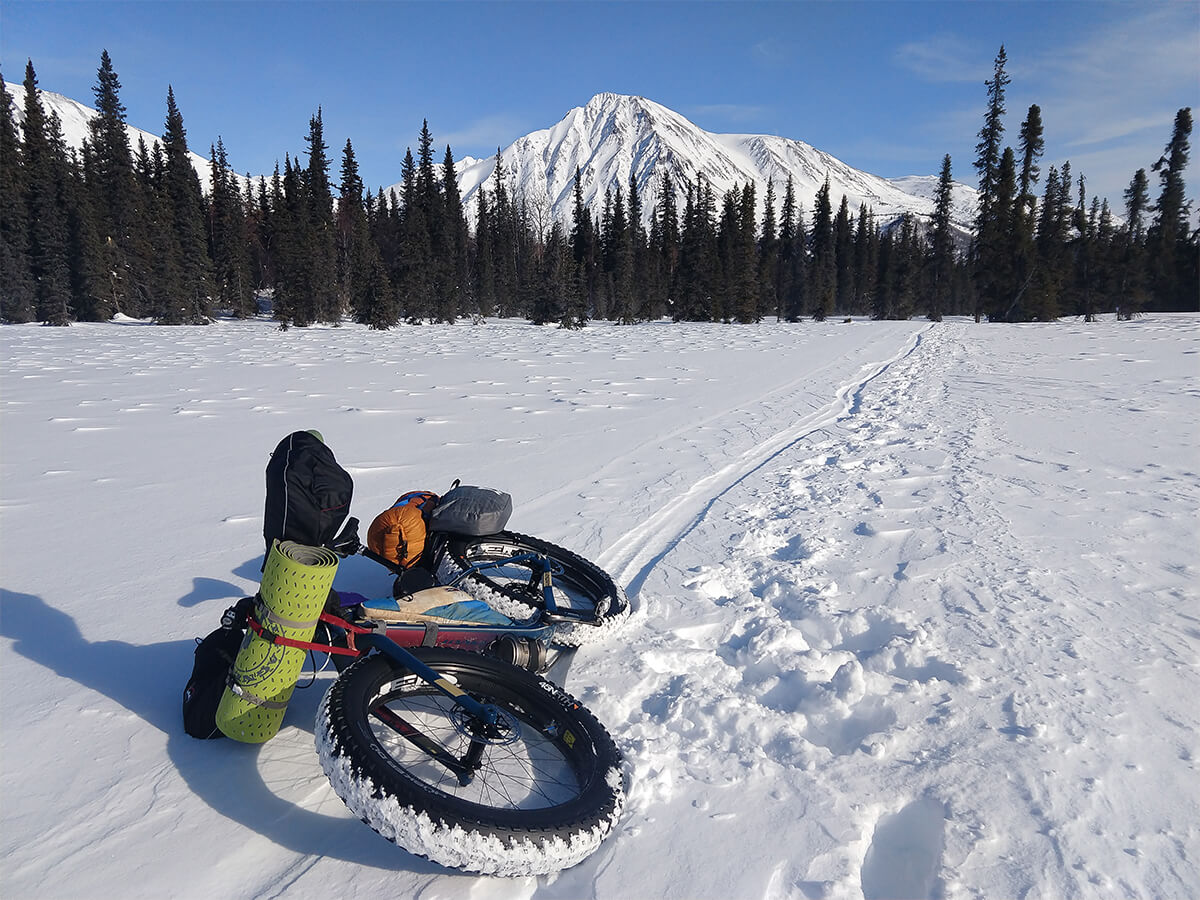 To race in the ITI, you must qualify by completing one or two other long and challenging winter ultras. This is to ensure racers arrive with the necessary experience to manage themselves in harsh winter conditions. That being said, a race like this is an attainable goal for any cyclist who is enthusiastic to learn the systems of multi-day winter fat biking and commit to preparing the body, mind and gear for the event. McGrath, where the 350 ends, is a small village in the Alaskan Interior with a cafe, hotel, store, and home of the generous Schneiderheinze family who welcome finishers with endless pancakes and a warm place to sleep. Racers gather in this home to rest, recuperate, and share stories of their journeys. As racers’ bodies thaw, the worst of the race’s discomforts quickly fade, and what remains is a great sense of accomplishment and gratitude. 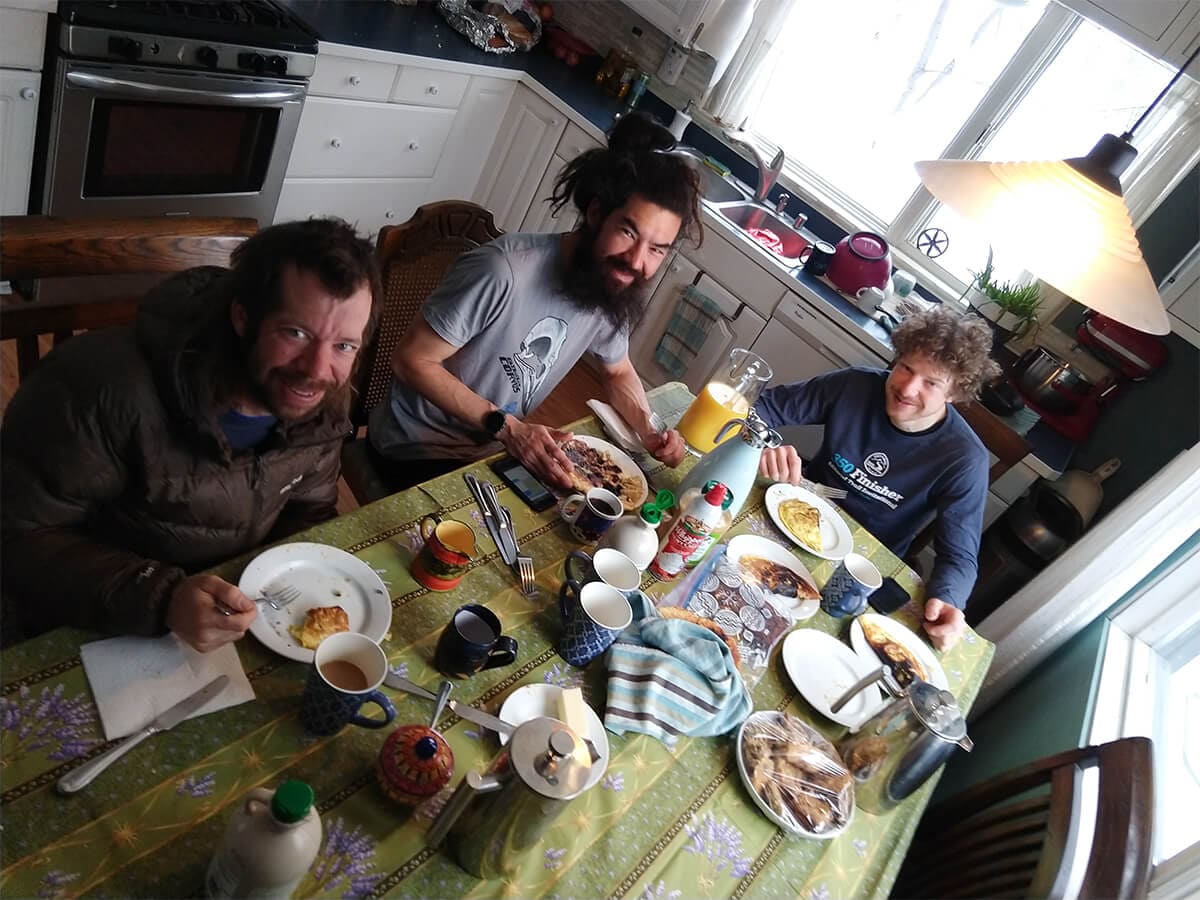