We recently sat down with one of our badass motorsports athletes, Jared Mees who had just wrapped up another incredible season by backing up his 2017 Grand National Dirt Track Series Championship with another one aboard his Indian Dirt Tracker

Jared is an avid cyclist, riding both road and mountain bikes. Cycling plays an important part in Jared’s training to keep him in top condition for the physical demands of Dirt Track racing. Shimano has been supporting Jared as a part of our Motorsports program for several years. 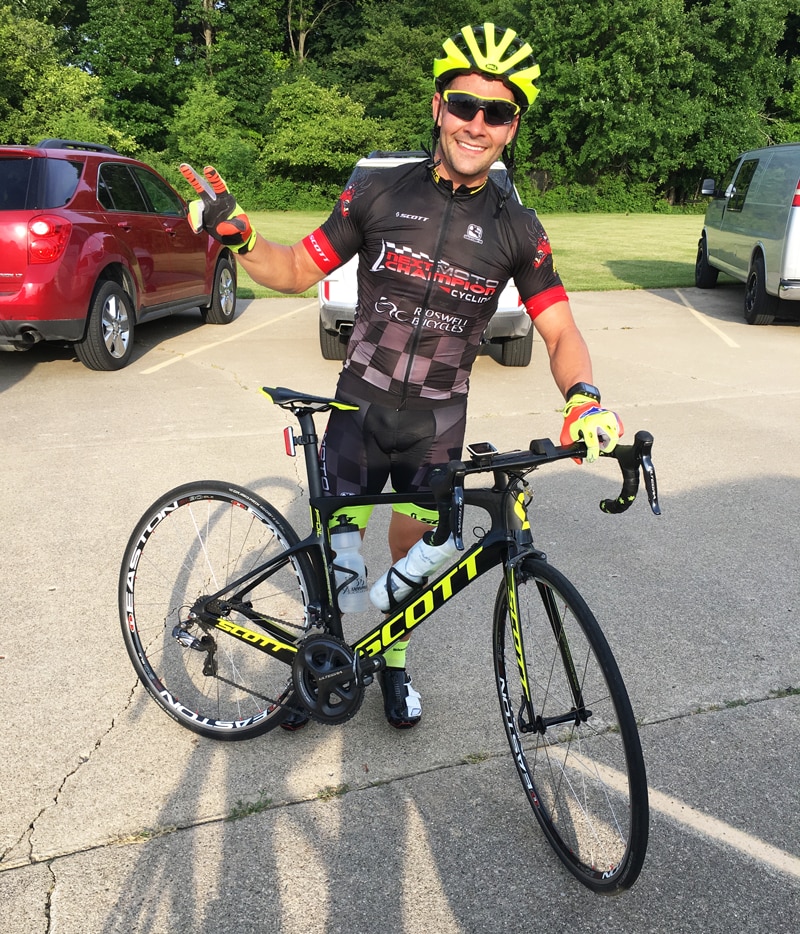 Jared, first off congrats on your 2018 Dirt Track National Championship. How special is this particular title for you?

They are all special, but repeating a Championship is always a tough thing to do and being able to do it with a dominating win at the end made it very special.

Dirt track racing is exciting bar-to-bar racing and high speeds, but it’s a bit of fringe sport in the world of Motorcycles. What specifically got you into Dirt Track racing in the first place?

It was something I started doing at 5 years old and I haven’t missed a year since! My father never raced dirt track but was a big motorcycling enthusiast and was the one that got me started. It made for an awesome father and son hobby. However, it didn’t take long before dirt tracking become something more serious for me.

For those out there that don’t really know what Dirt Track Racing, can you give us a basic breakdown of what exactly Dirt Track racing is?

Dirt Track, also known as flat track is actually where all motorcycle racing originated from! As the name implies it’s literally a flat track in the dirt. Generally an oval with varying lengths. There is short track, half mile and the big daddy mile oval where we reach speeds of 135mph in the straights and around 80mph in the turns. There is also a TT track which involves a single jump and a right turn. All racing is head to head and involves a fairly specific type of bike known as a dirt tracker. There is qualifying heat races that lead to a final point paying main event. The big challenges in flat track is having the ability to control your bike through the turns. Trying to maintain your speed while racing head-to-head makes for some exciting racing. If you have never seen a dirt track race I highly encourage you to check one out in person or at least find out when there is one on TV.

How does someone get into Dirt Track racing these days and how does one practice for it?

You can start with an off the showroom floor motocross bike and with a few modifications like lowering the suspension and changing out the wheels and tires you can start flat tracking. There are numerous tracks around the country available to practice on. Contact the AMA or local dealers for tracks to ride.

How do you specifically train for dirt track racing?

Most of all my training is actually off the motorcycle.  Flat Track, in particular the big twin dirt trackers, like I race are tough to train for. In general the available practice tracks are for the singles (off the showroom floor motocross bikes that have been slightly modified). The Indian twin I race is a very specialized bike and is really never ridden except for at a big races. I do cross train on a motocross bike as well though.

How fit do you have to be to be successful in Dirt Tracker?

Some guys don’t do anything and are successful while others spend a lot of time.  I personally feel that you have to have a structured program to be successful. As part of my structured training regime I include cycling both on and off-road and Rowing. I really enjoy getting on the bike and being out in the open air and riding with my buddies. How big of a part of your training program is cycling?

I would say that cycling is about 60 percent of my training during the season and even more in the off season. I generally keep my bike rides to shorter higher anaerobic type rides to help me be prepared for the short high intensity races that I do. Some guys like Nascar drivers use cycling to help build up their endurance and put in longer miles than I do. I am more concerned with shorter, higher intensity types of racing. I do have a structured training program though and I mix up the rides some and don’t just hammer out at max heart rate every ride.

Both for me. I can’t really choose what I like better. Road cycling is particularly fun with big groups and good company, but not as fun when you are alone while mountain biking on the other hand is more fun for me when I am riding alone than when I am on the road bike alone.

How big is cycling among Dirt Trackers?

I think a lot more than what we lead on.  Cycling as a training tool for dirt track has been around for a while and can almost be considered a bit of an old school way of training. In my opinion it is still the best way to train for our sport.

It seemed like several years ago Dirt Track racing was dying off, however in recent years there seems to be a bit of a resurgence going on. First, do you think there has in fact been a resurgence and if so do you think this resurgence has anything to do with Indian Motor-Cycles coming to the table with a brand new Dirt Track specific bike?

I think Flat Track is for sure on the upswing for a lot of reasons, but I would say half of it is in fact because of Indian.  It’s not just their bike though, but everything they are doing in the industry. Right now, I can walk into any Indian dealership and guarantee the manager or owner will know who I am and what I do.  When I raced for Harley I had to explain to them I raced for Harley and they wouldn’t even know Harley had a Flat Track team.  So Indian is doing an awesome job at making Flat Track racing known. It’s truly great for the sport. Tell us about how you got hooked up with Indian Motorcycles.

Back in 2016 I was actually only hired on to be a test rider for them. After a few test rides though I knew this bike was going to be the weapon for me.

So, back to cycling, do you ever compete in cycling events during your off-season?

I don’t currently, but I’ve thought about it and think that I should because I’m such a competitive person.

What is your favorite part about cycling?

How often are you on the bicycle?

During the season I’m on the bike around 2 or 3 days a week at most. In the off season it’s quite a bit more. My rides vary between 1.5 to 2.5 hrs generally riding in the higher heart rate zones.

What other things are you into besides racing Dirt Track and riding bikes?

My family! I have an awesome wife and a 16-month year old daughter.  I also promote the Lima Half Mile which is one of the rounds on American Flat Track Circuit.

Racing at the highest level like you do requires a lot of dedication, hard work and a strong team behind you. Who are the people and companies in your corner that help make it possible?

So many people really help out. Indian, Craig Rogers, my mechanics Kenny, Bubba, Jimmy - my wife Nichole, my training partner Craig Pickett. Dick Tibbits, and many more oh and Shimano for making sure I have the best tools to train with while cycling!

Anything else you would like to say to someone reading this interview?

Thanks a lot to all my team and supporters it means a lot to win 6 championships and I could not have done it without everyone’s support!