The Tour de France is the one race that every rider in the professional peloton dreams of. To win a stage or wear a leader’s jersey is often enough to make their whole season successful and fulfill their childhood ambitions. No other race captures the World’s imagination on such a scale. No other race is so competitive.

For equipment too, the Tour is uniquely testing. From flat, windy stages and time trials long, hard days in the high mountains, the race involves many different challenges, each of which calls for a particular bicycle set-up. This year’s edition promises to be especially demanding. The racers will seek out any possible advantage. We got in touch with World Tour mechanic Rob van den Brand, who has multiple years of experience within various teams, to learn how the riders are likely to configure their bikes for five crucial stages.

Stage nine will bring the riders to hell. Short, at just 97 miles, it will take the race to the brutal tracks of Paris-Roubaix, with 13.7 miles of cobblestones divided between 15 sectors along the route from Arras to Roubaix. 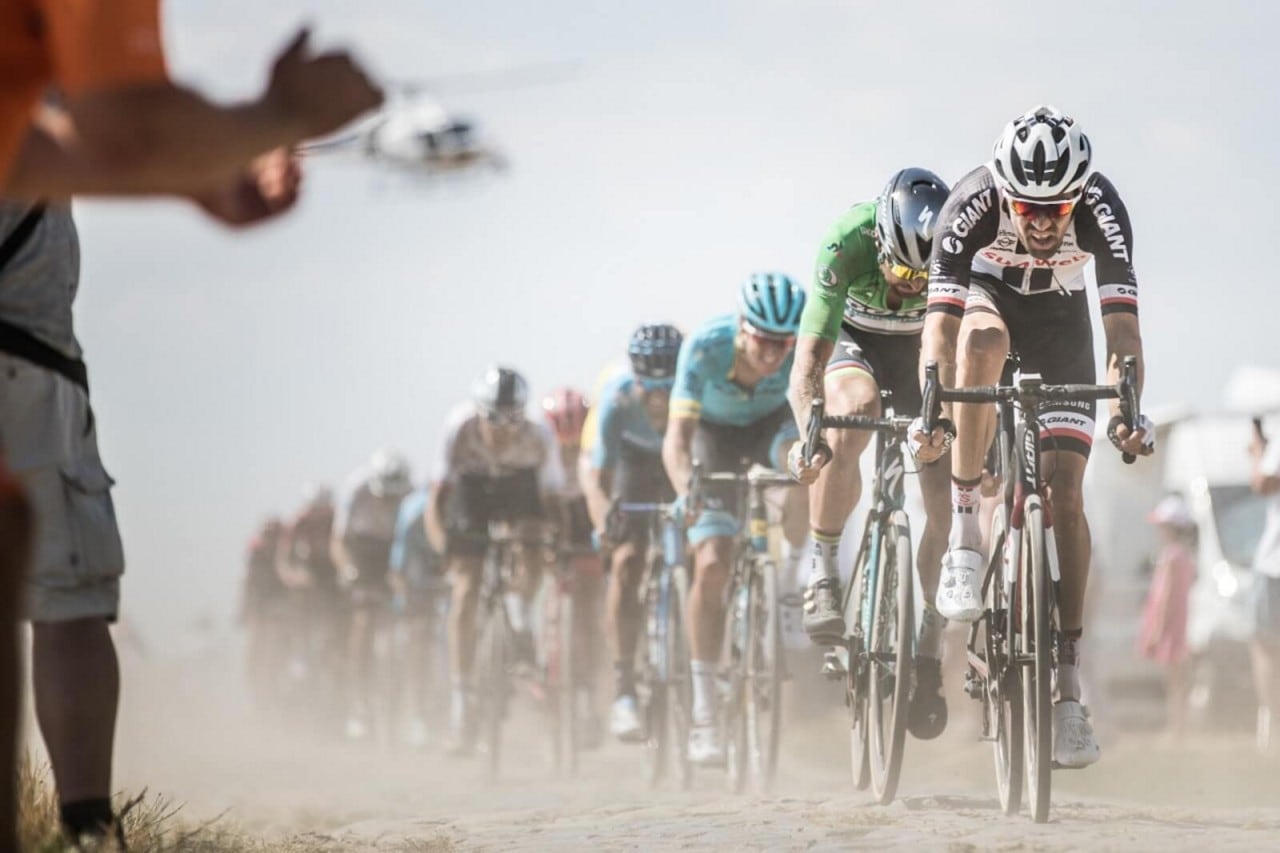 The backroads of northern France are notoriously rough. Chucked down onto dusty ground that turns muddy when it is wet, the large, irregular stones that make up their surface can throw even the biggest spring-classics specialists from their bikes. For lithe climbers and GC hopefuls who are more at home in the Alps, the stage will be a dangerous challenge, which may prove decisive. It will favour those who are well prepared. 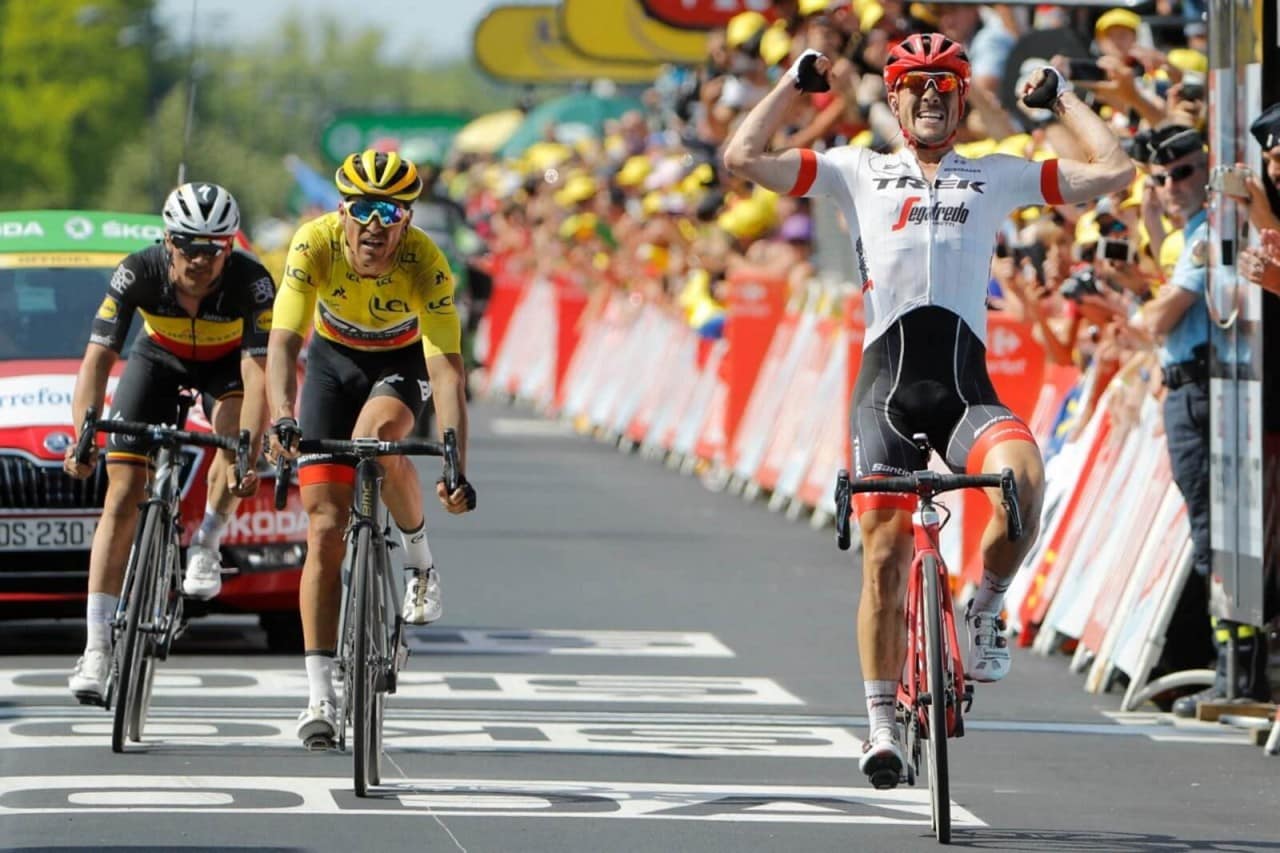 The top contenders will all have reconnoitred the course before the Tour and sought out the advice of their team’s top classics riders. Their mechanics will put to use all of the knowledge they have acquired over their many spring campaigns. “Most teams will ride a Paris-Roubaix set up,” Rob says. “That means spring-classics bikes, 28 or 30mm tubulars, a 42 or 44-tooth inner ring, a chain catcher, and an 11-28 or 11-25 cassette”. Bars will be double wrapped, with gel patches added under the tape for cushioning. The mechanics will also mount electronic satellite shifters, so their riders can change gears wherever their hands are on the bars. Then, there’s just the matter of inflating tires. “Tire pressure is always an important factor in the cobbled classics,” Rob says. “What we put in is determined by experience and rider preference. Let’s say it is plus or minus four bar. The exact pressure is usually a bit of a secret”.

40 miles of climbing. After two earlier stages in the Alps, the riders will face one of the hardest tests in this year’s Tour. First up: the Col de la Madeleine, which averages over 6% for 15.5 miles. The riders will then take on the iconic switchbacks of the Lacets de Montvernier (2.1 miles at 8.2%) and the 18-mile Col de la Croix de Fer, before reaching the finale, on cycling’s greatest stadium, l’Alpe d’Huez. It promises to be a very hard-fought stage. Whoever wins on the Alpe will write their name onto an honour roll that includes many of cycling’s most storied riders. By the end of the stage, the overall may already be all but decided. Before the start, the riders will first have to make sure their equipment is in order for the climbs. 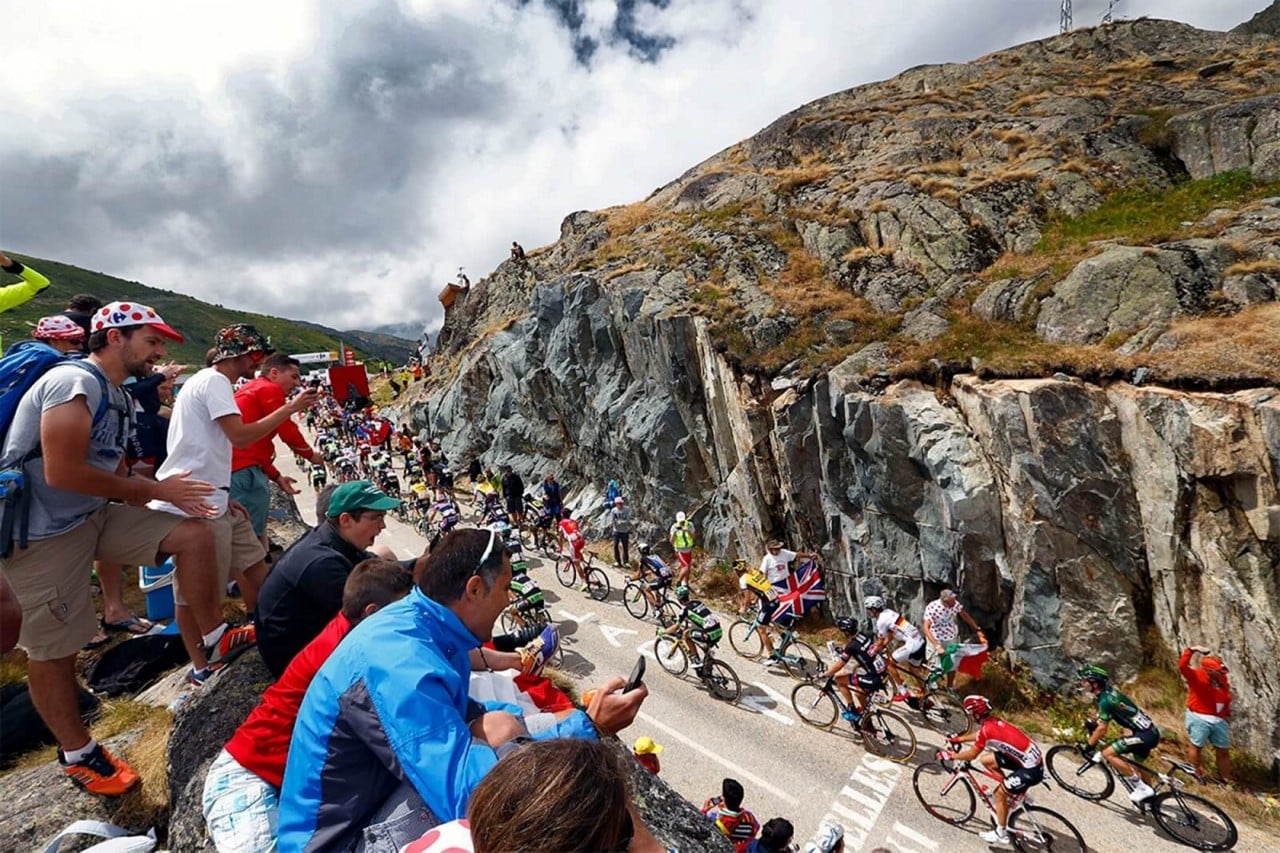 “In the peloton today, most big teams have a spring-classics bike, an aero bike, and an all-around bike,” Rob says. “The latter is used for hilly and mountain stages”. On long climbs, the riders have to have the right gearing to maintain an efficient cadence. “Shimano has an 11-30 cassette that most teams use throughout the year now, with either a 36, 38, or 39 inner ring. Sometimes, a 34 is even used. For this stage, they will likely use the 11-30 cassette with a 39-tooth inner ring”. Of course, the weight of a rider’s bike is crucial in the mountains. “We try to bring it down to 14.99lbs, which is the UCI’s minimum weight,” Rob says. “For most bikes nowadays, that’s easy to achieve by mounting low-profile wheels.

The history of the Tour de France is a history of innovation. From its very beginning, the race’s organisers have experimented with its format, making changes to ensure that the contest is compelling and draws ever bigger audiences. Stage 17 of the 2018 Tour continues that tradition. The 40.4 mile stage will feature three major climbs, the Col de Peyresourde, the Col de Val Louron-Azet, and the Col du Portet. And the action is likely to explode from the gun. The top twenty riders in the classification will start on a Formula-One-style starting grid, placed according to their ranking, right at the base of the Peyresourde. Their team mates may never make it to the front once the race is on, so expect a man-to-man battle between the top favourites with the maillot jaune as the prize. 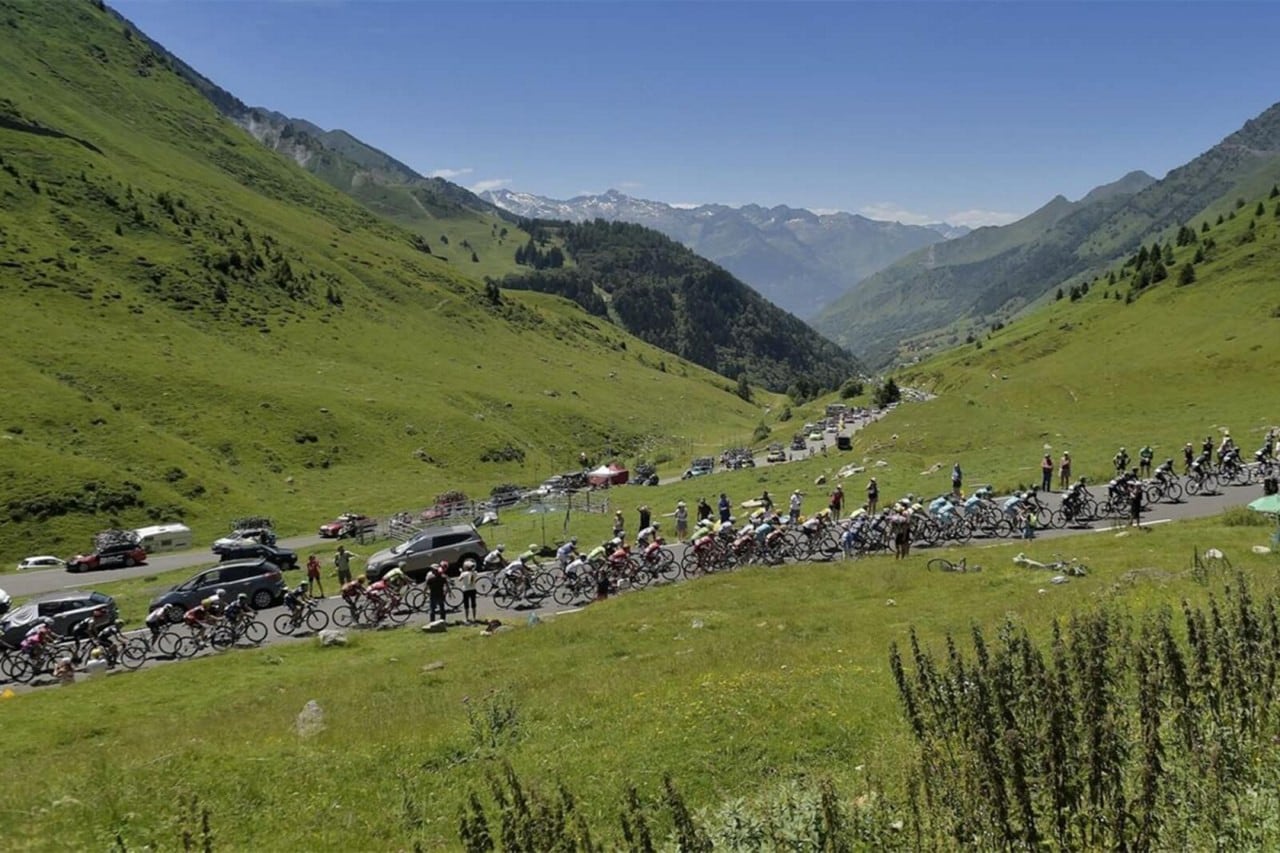 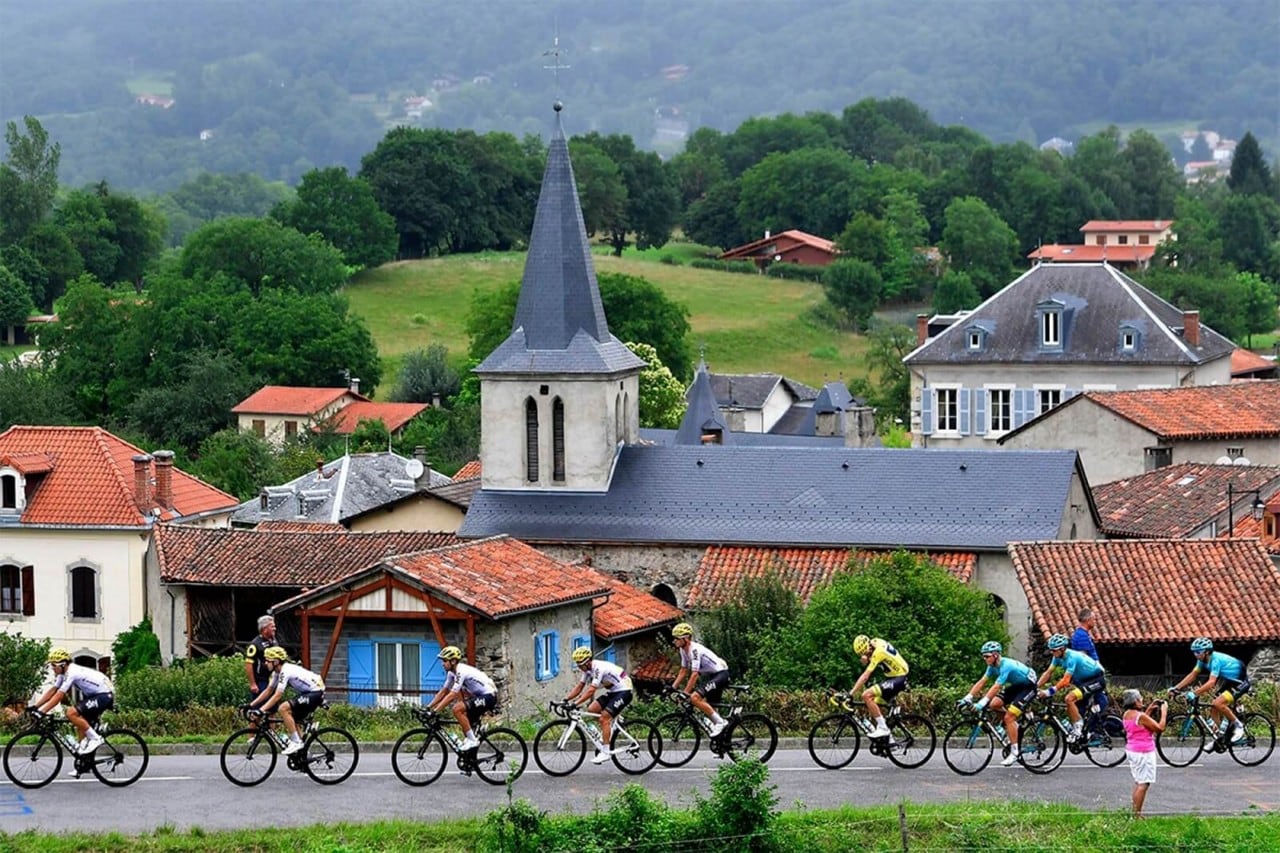 The Tour’s history is also a history of technological innovation. As a World Tour mechanic, Rob has plenty of experience on the front lines. “Bikes have developed a lot in recent years, and it’s nice to be a part of that,” he says. “Obviously disc brakes are a big thing now, and a lot of teams are using them already with through axles. Electronic shifting has been common in the pro peloton for years, and riders can now even use their Shimano shifters to control their bike computers”.

Over the last few seasons, the biggest focus has been on aerodynamics, which, “are becoming more and more important, and not only with aero bikes, with their integrated handlebar, stem, internal cables, and disc brakes, but also aero helmets, clothing, socks, and gels,” Rob says. What does he think of these developments? “It doesn’t make our job easier, but it’s for sure more interesting to work with hydraulic brakes, electronic shifting, and so on. And it will be interesting to see what is going to happen in the years to come”. As Rob says, “It’s all about marginal gains.” 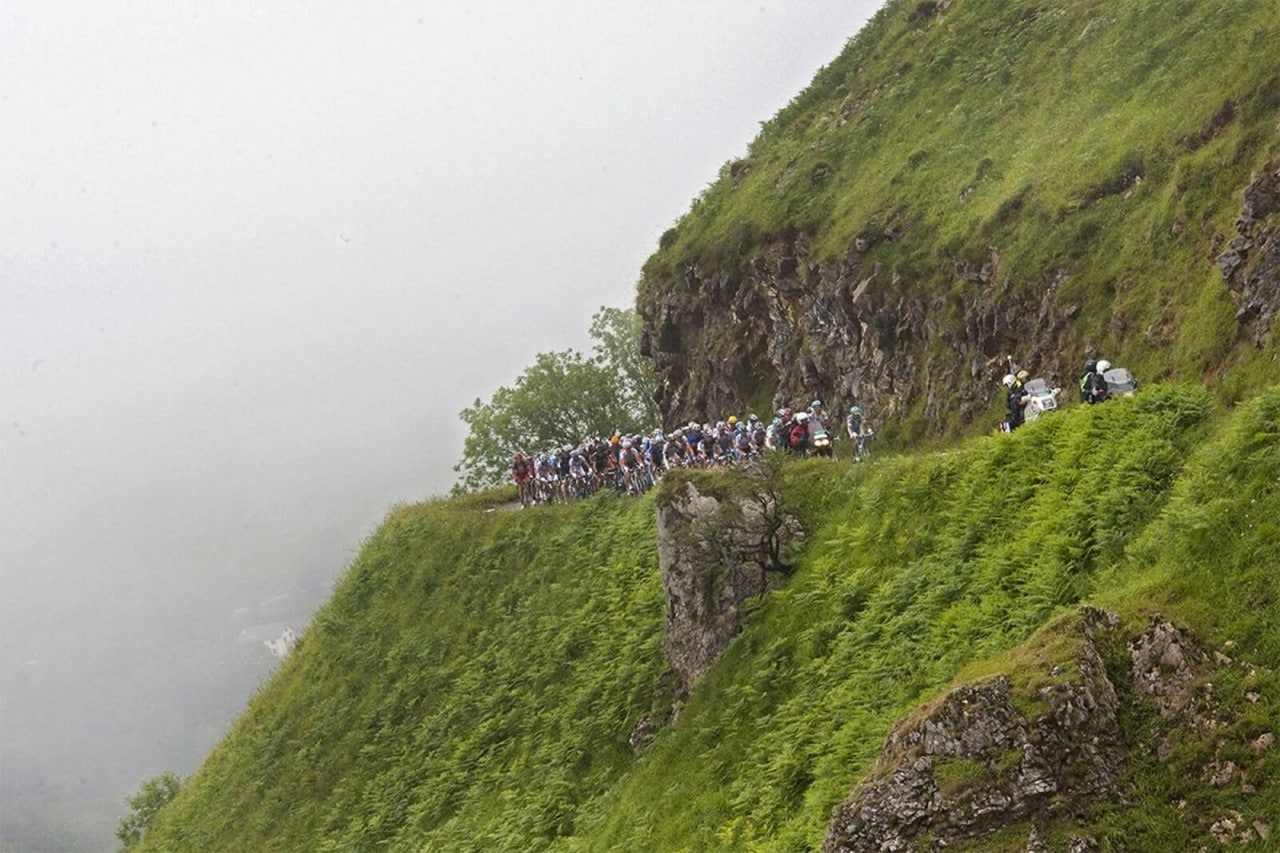 It will be the last day of climbing in this year’s Tour, so there are likely to be fireworks if the GC is at all close. With a time trial the next day, the climbers may have to go on the attack to have any chance of winning. And the race ends down hill, with the finish at the bottom of the descent off the Tourmalet. That will reward the brave, though those who are too brave could easily see their chances disappear on a high-speed bend. 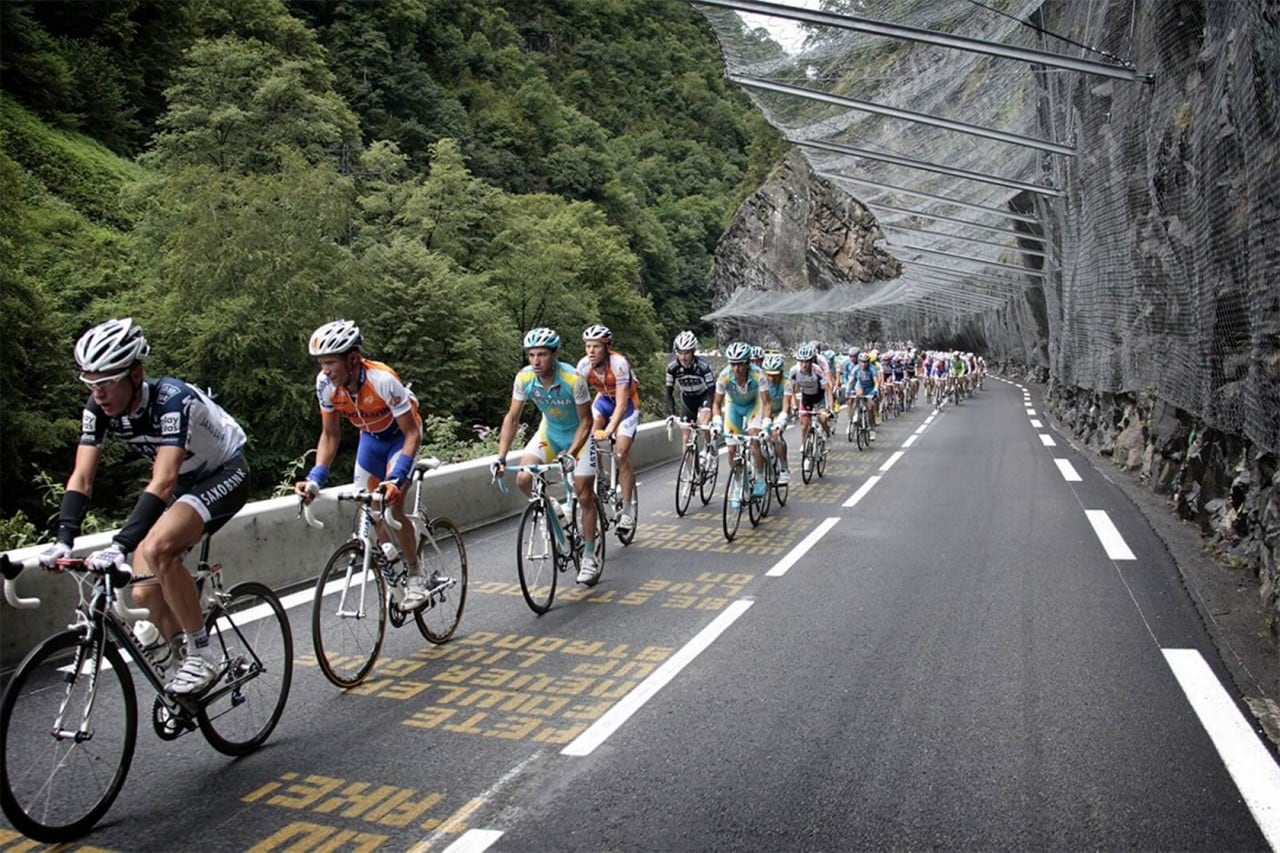 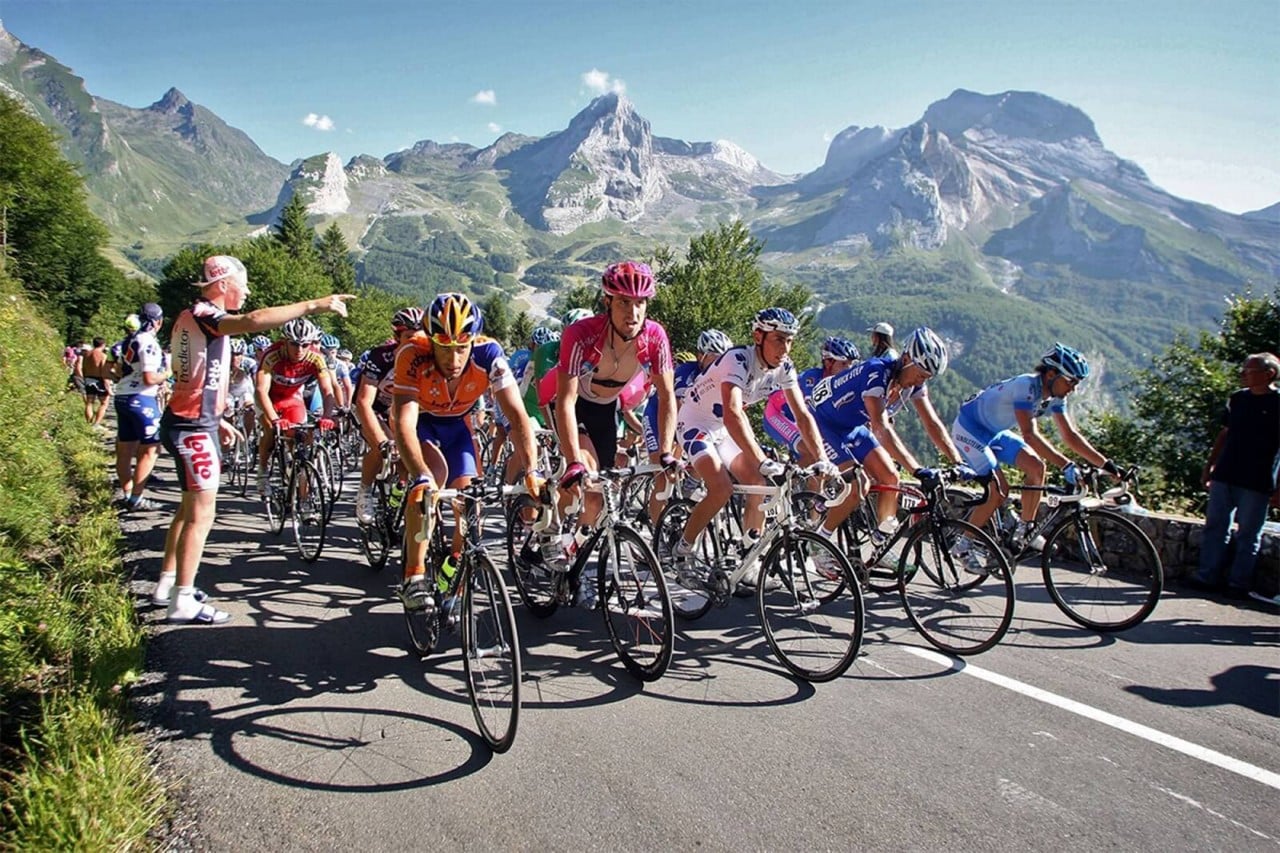 Downhill, tires are as important as they are in motorsports. “As far as I know, all World Tour teams still race on tubulars,” Rob says. “But many things have changed in recent years. Before, 23mm tubulars were common, and now the most used size is 25mm. In combination with a wider rim, this seems to be the best set up”. Tire pressure is also crucial. It is always a balance between grip and rolling resistance. “Again, experience and rider preference determine the pressure we put in at the start,” Rob says. “The compound is another big factor. Some tubulars are known for their grippy qualities, others for their low rolling resistance”. Competition between the top manufacturers means that tires are becoming more and more evenly matched.  Braking performance is another vital factor. “Of course, disc brakes make a difference on a descent compared to rim brakes,” Rob says. “But the biggest factor that determines how fast a rider can ride a descent is still his technique. No bike can replace that!”

The only individual time trial of the 2018 Tour will be held on the race’s penultimate day. At just 29 miles, it is not long by Tour de France standards, but it is technical, with short, steep climbs and very tight descents. The course will favour risk takers and anyone who is still relatively fresh after three brutal weeks. If the classification is still close, it will be one of the most dramatic days of the Tour, and could decide who leads the parade into Paris. 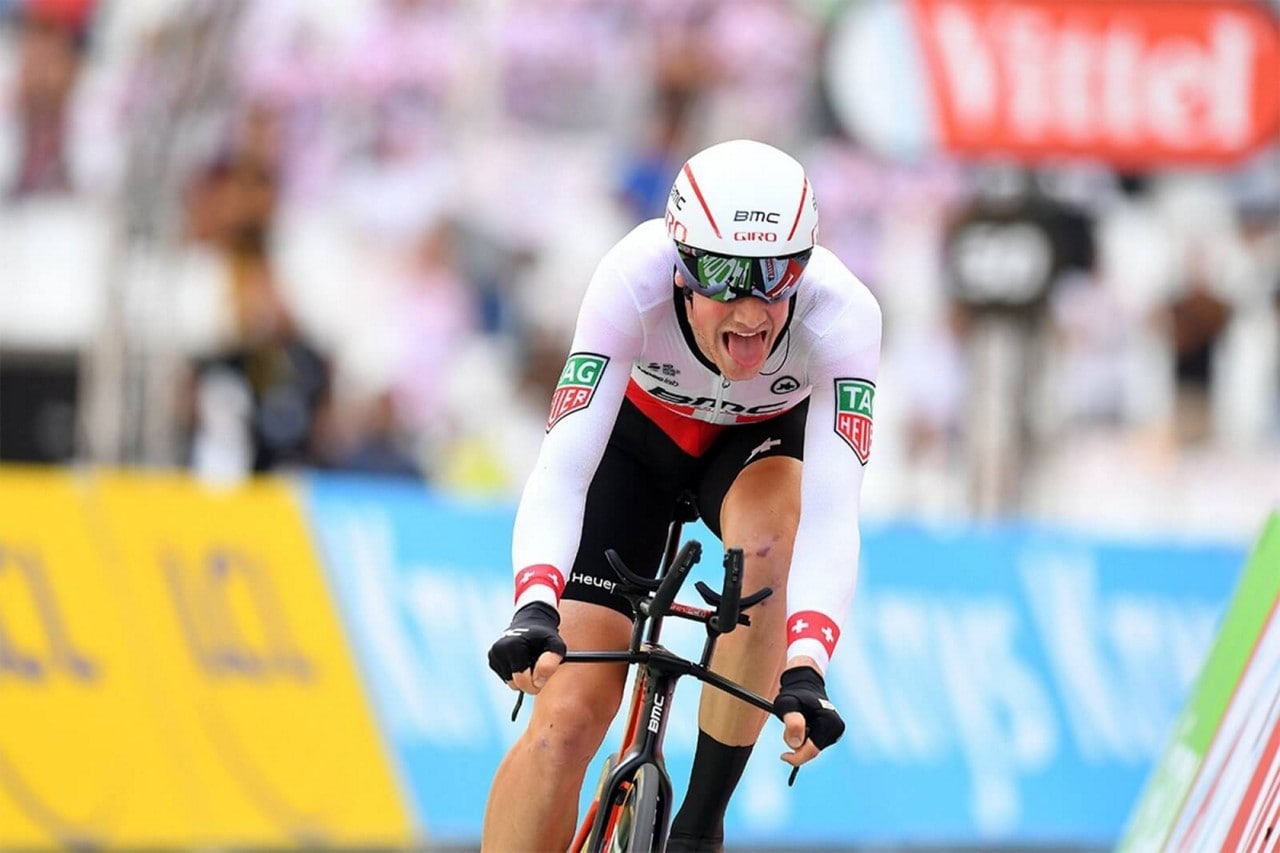 Technology will play a decisive role. “Most riders have done aerodynamic and wind-tunnel tests to optimise their position,” Rob says. “As with any stage, they can ask for any gearing that we have available. For a time trial, this is usually decided after the recon. Usually, it’s a matter of putting on a bigger or smaller chainring and a deeper or shallower front wheel or perhaps a three-spoke one. Most riders use a 54-tooth chainring with an 11-25 or 11-28 cassette. But some riders use a 56 standard.  We can mount anything, from a 52 to a 58 outer ring”. Tests have shown that tubeless tires have an even lower rolling resistance than tubulars, so these are used more and more on TT bikes. Frame geometry and the measurements of handlebar extensions are strictly regulated by the UCI, so there is not much room for manoeuvre in terms of design. Still, Rob says, “time trial bike are getting faster, lighter, and more and more customised.” Stage 20 will be a great test of the best.