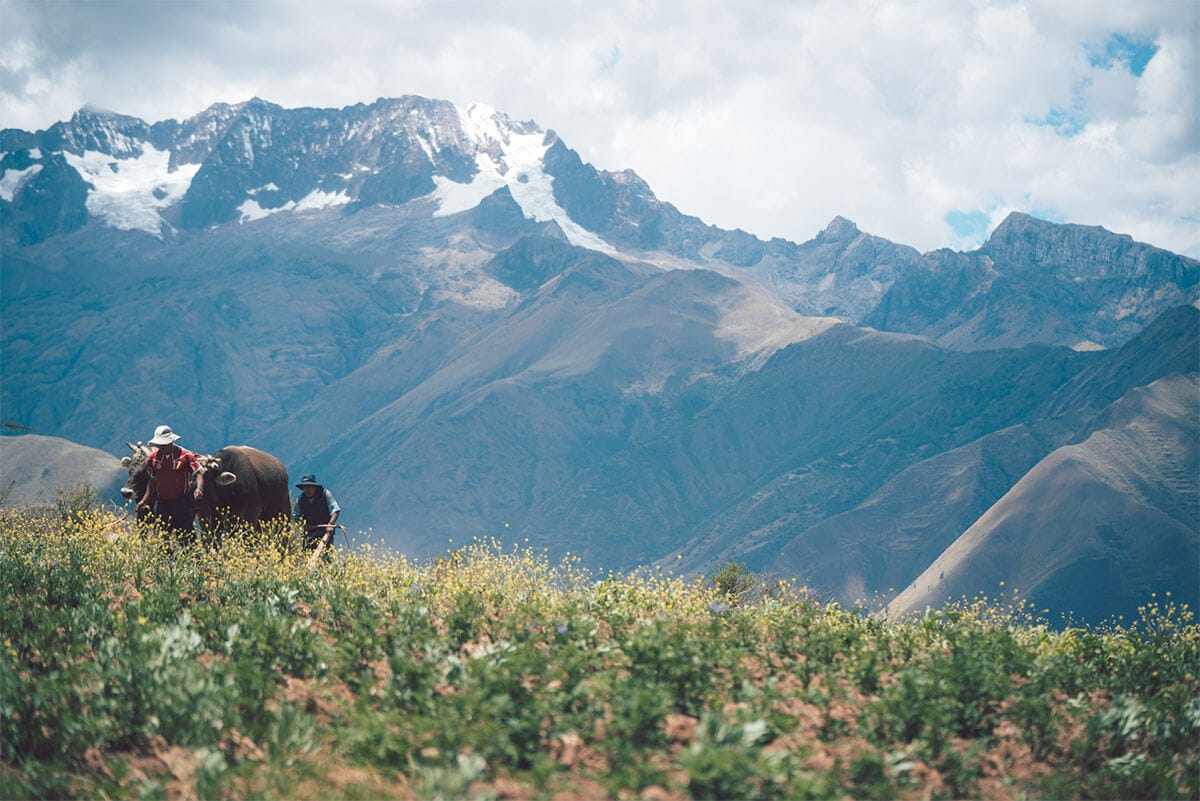 Peru loves potatoes. They’re one of the most popular foods in the country, and thousands of varieties of potatoes are grown from across the lowlands to high in the Andes Mountains. This small, unassuming plant is an essential ingredient to Peruvian history as well. Archeological evidence suggests potatoes were initially domesticated in this region some 8,000 years ago. After eating our share of potatoes during a week-long mountain bike trip through Peru, and after experiencing the extensive trail networks across the country, I’m convinced trails were domesticated in Peru as well. 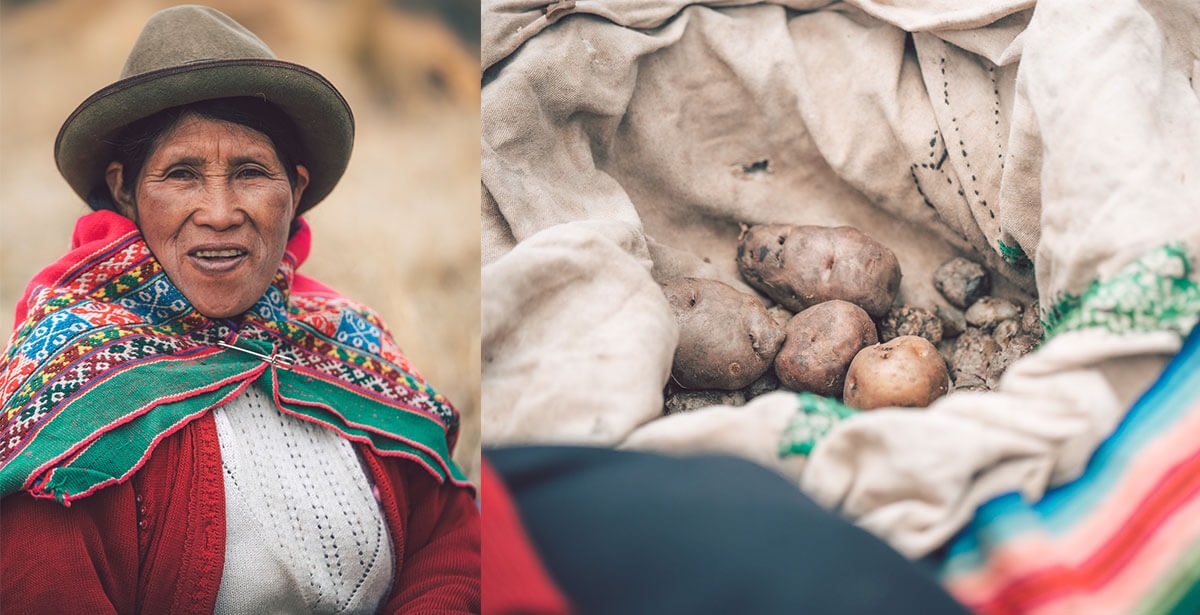 Thousands upon thousands of kilometers of ancient Inca networks span throughout Peru, and mountain biking in this region is unlike anywhere else in the world. It's a radical blend of the old and the new, just like Peru's culture, which is a mix between large indigenous populations that still live a traditional lifestyle and the other half, which resembles modern society as we know it. Peru is home to the oldest civilization in the Americas, and during our week of mountain bike adventures, we got to experience the spectacular terrain, explore ancient ruins, and learn about the local cultures that make up this historical place. 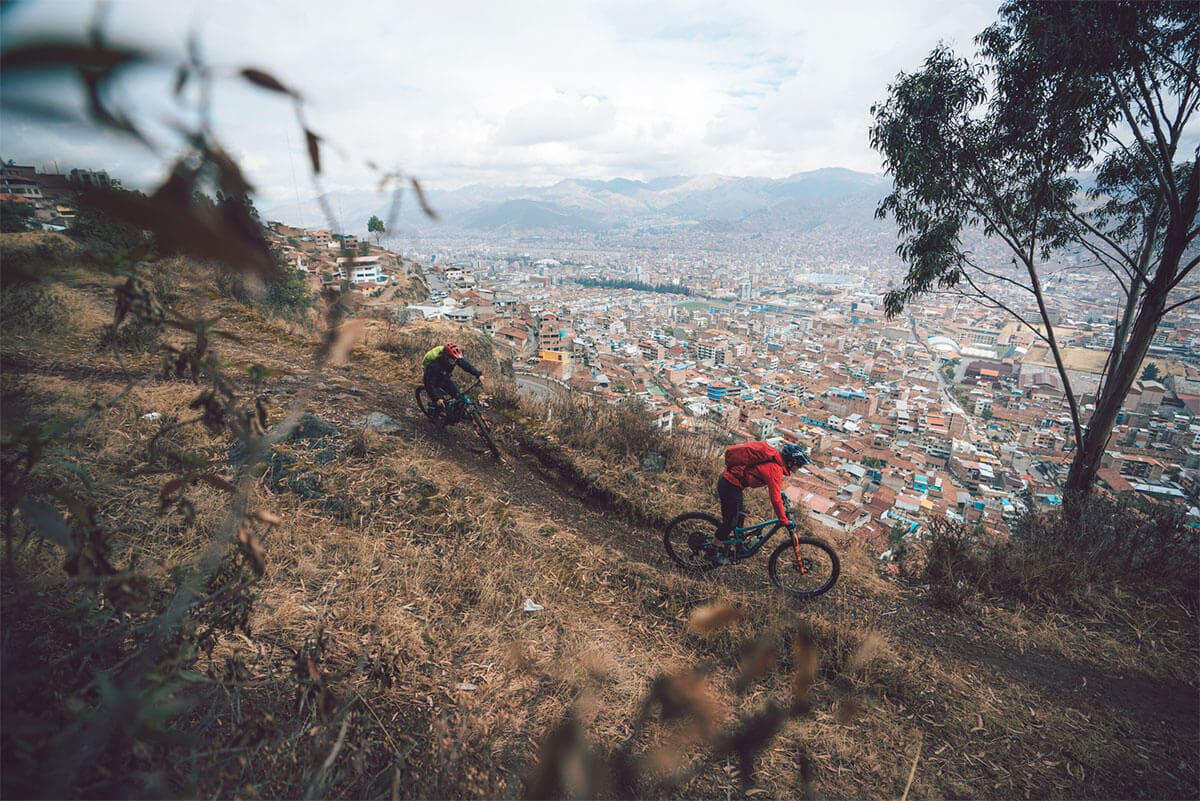 Big Mountain Bike Adventures, a guiding outfitter from Whistler, British Columbia hosts several mountain bike trips to Peru each year. This trip, an eight-day adventure that combines mountain biking and Andean culture, was a women’s only excursion that my friend, Sylvie Allen, owner of Sweet Skills, helped establish. Leslie Kehmeier and I joined the group to document the journey while experiencing mountain biking in Peru from news angles, including vertically.

Exactly one year before this trip, I visited the northern region of Peru to ride in the Cordillera Blanca and Negra zones near Huaraz. This year's trip, however, would start in Cusco, a city of one million people, located more than 1,400 kilometers south of Huaraz. We’d spend the first few days riding around the Cusco area, and then move into the more remote Sacred Valley region for the second half of the trip.

Cusco was once the capital of the Inca Empire and it is now a designated UNESCO world heritage site. The city is vibrant, with an ancient yet modern feel, and it sits at just over 11,000 feet above sea level. Gasp! The food in Cusco is some of the freshest fares with potatoes and quinoa making up the base for most meals while daily outdoor markets sell every kind of food you can imagine.

Sylvie, Leslie, and our friends Kelli and Koel arrived in Cusco several days before the official trip with Big Mountain kicked off. We spent our first full day in Cusco touring the town on foot and hiking up towards the ancient ruins of Sacsayhuamán. On our way up to the ruins, Kelli and Koel hit up a tiny street vendor selling cooked potatoes and boiled eggs. One of my rules about traveling abroad is to avoid eating street food on the first day. It’s a rule that’s done me well over the years, so I upheld this promise while seriously salivating at my friends’ gorgeous looking snack. Prepared with simple ingredients by a very senior indigenous woman sitting on the hard ground, the snack consisted of potatoes, which quickly became a constant throughout the trip. In the end, the gals fared well with the street food snack. I should have gone for it. 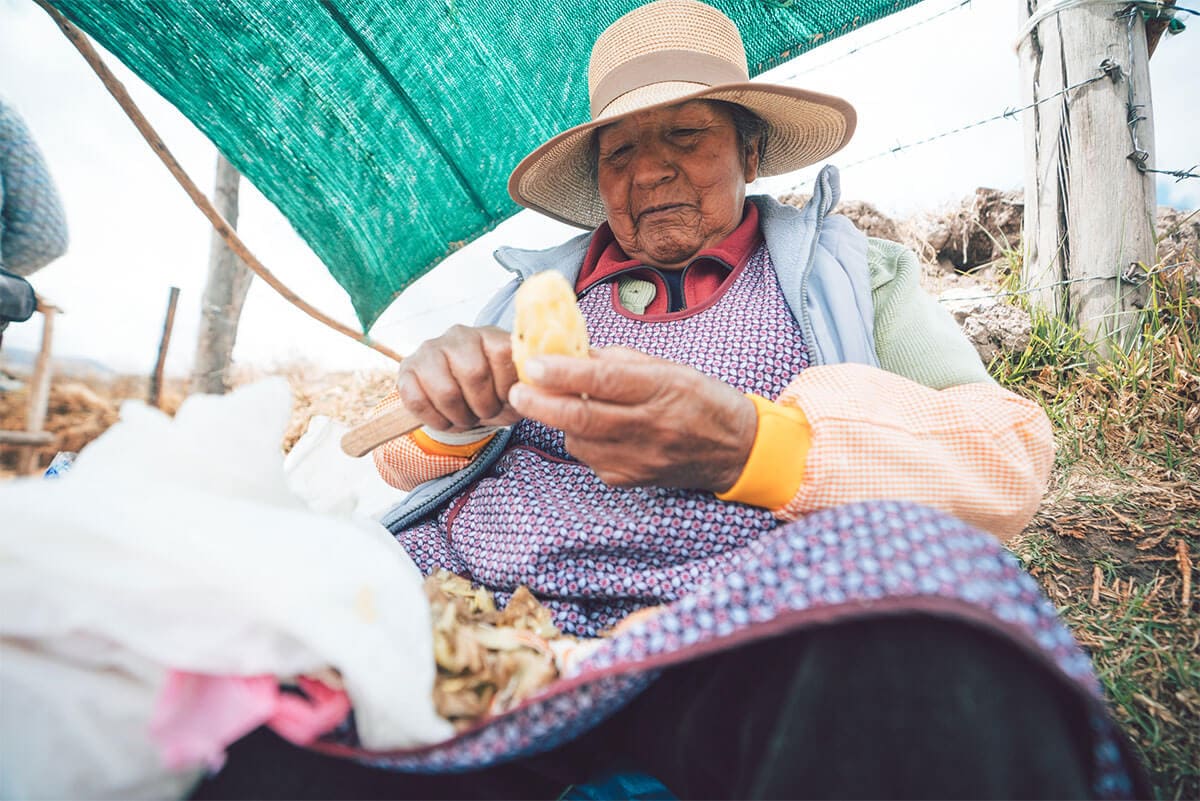 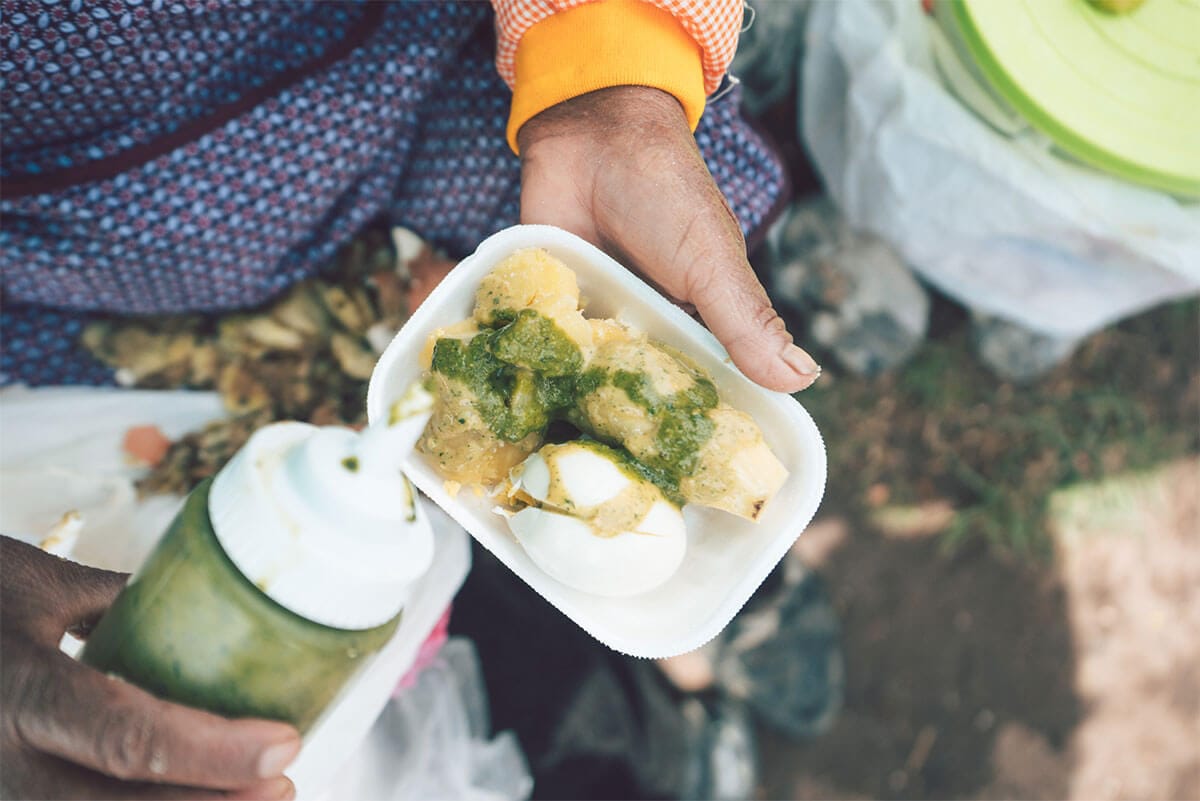 As we continued our hike up toward the Sacsayhuamán ruins, the massive scale of this stone fortress was unmistakable. The sheer size and precision of each stone next to the other exemplified perfection. Built in a time before excavators and cranes existed, the structure’s 30-foot rock walls have withstood centuries of earthquakes, weather, and war.

As our Big Mountain group arrived the following day, we were excited to get down to business and ride some bikes. But before jumping onto the trails, we were welcomed with a group dinner at one of Cusco’s best vegan eateries. If people could eat every meal at the Green Point restaurant in the San Blas district, it would be easy to convert to a plant-based diet. It’s that delicious. Surprisingly, Cusco offers loads of quality vegan and vegetarian restaurants. Whether they’re catering to international tourists or are simply part of a bigger, global movement, Cusco had better options for eating green than any other city I've been.

During our welcome dinner, we discovered that potatoes aren’t the only staple in Peruvian cuisine. Pisco Sours are another essential ingredient to the culinary experience. The Peruvian cocktail features pisco - essentially a type of brandy - as its base, paired with some sort of sour citrus and sweetener. They’re far too tasty and incredibly dangerous at our high altitude. It’s recommended to back off the booze and abstain for the first few days as you acclimate to the altitude, and we kept our cool and kept the piscos to a minimum. At least at the start of our trip. 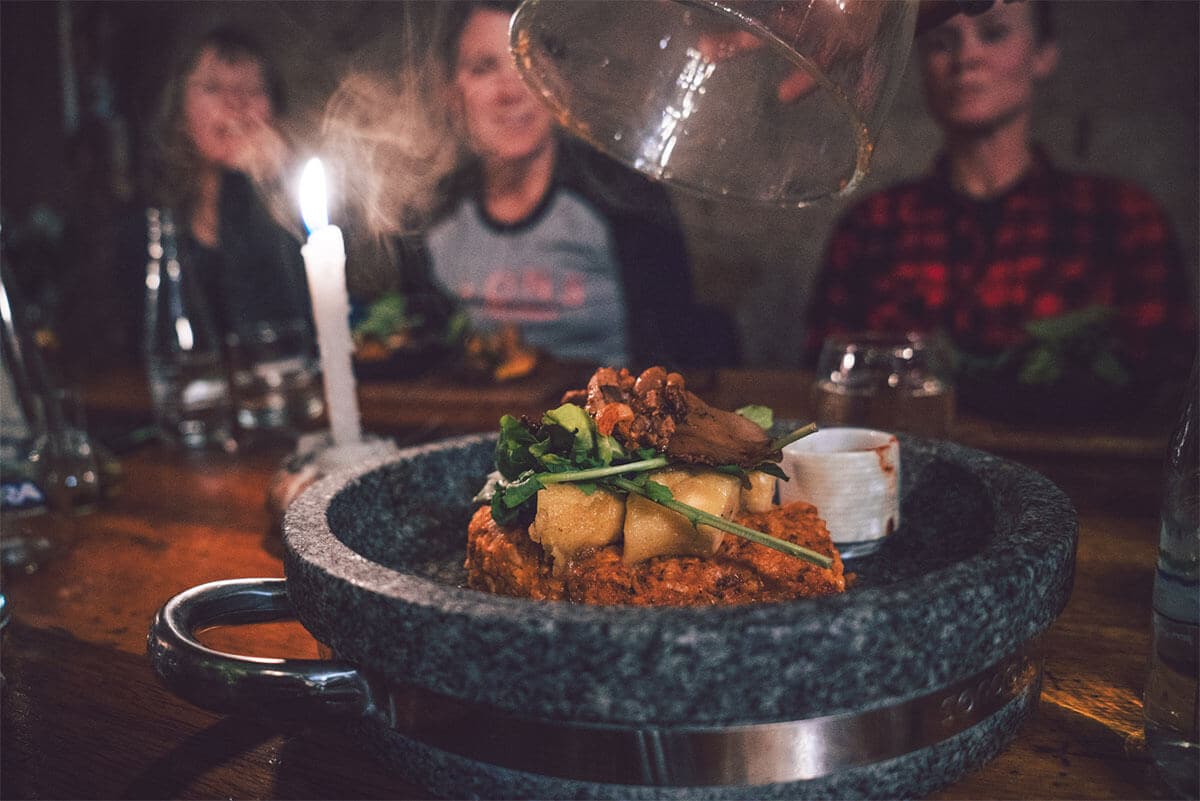 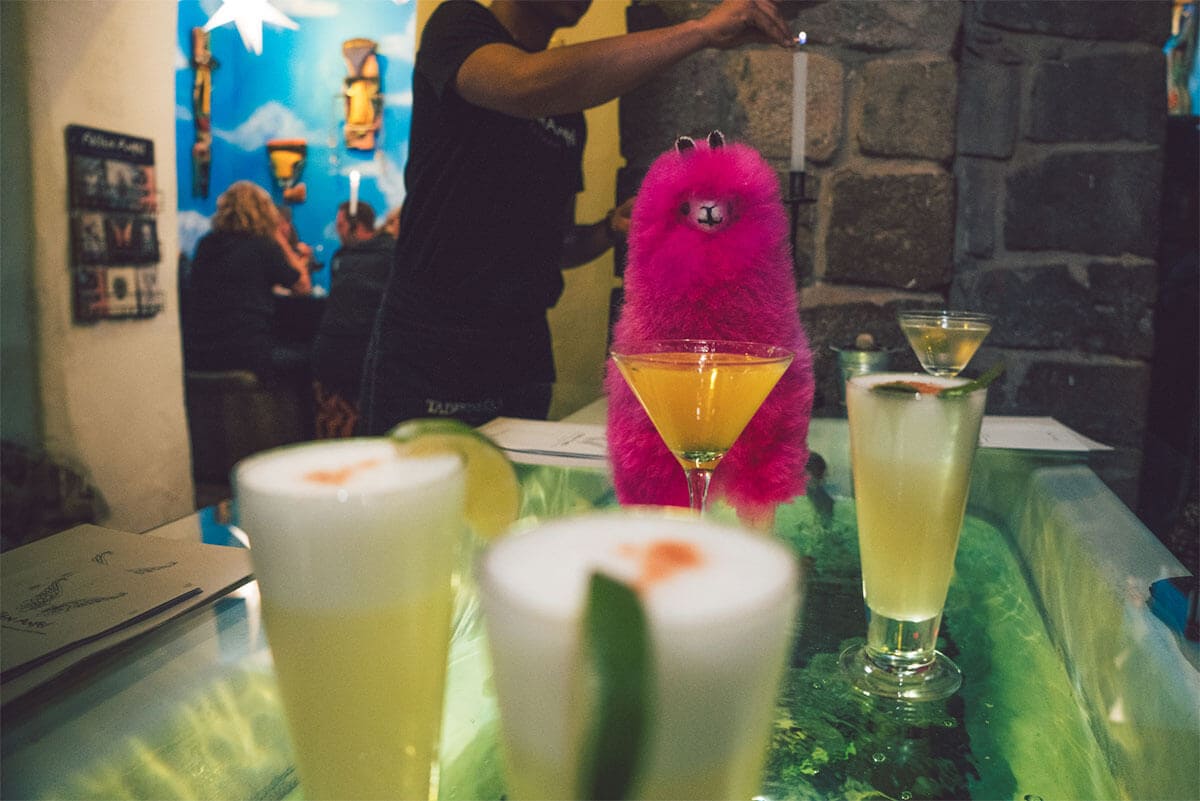 Big Mountain Bike Adventures offers incredible trips in 17 different countries around the world. They’re known for their hospitality and genuine cultural experiences delivered thanks to their collaboration with knowledgeable local guides in each region and country. Three Peruvians guided our trip - brothers Chente and Nico and their friend Gabriel - who knew every trail, every barking dog, and every sweet spot along the route. This local knowledge was extremely important, especially for avoiding the dogs.

Chente, Nico, and Gabriel grew up together in Arequipa and now show off their country and endless tails to riders from around the world. Gabriel primarily works as a fly-fishing guide but also guides mountain biking and lives on the same property as Chente and Nico in the Sacred Valley. The trio has explored and ridden hundreds of local trails, carefully curating the perfect network for their guests. Scouting this area has been no small task as the Incas build thousands of kilometers of trails connecting villages and towns. You could ride mountain bikes here for a lifetime and not ride the same trail twice. 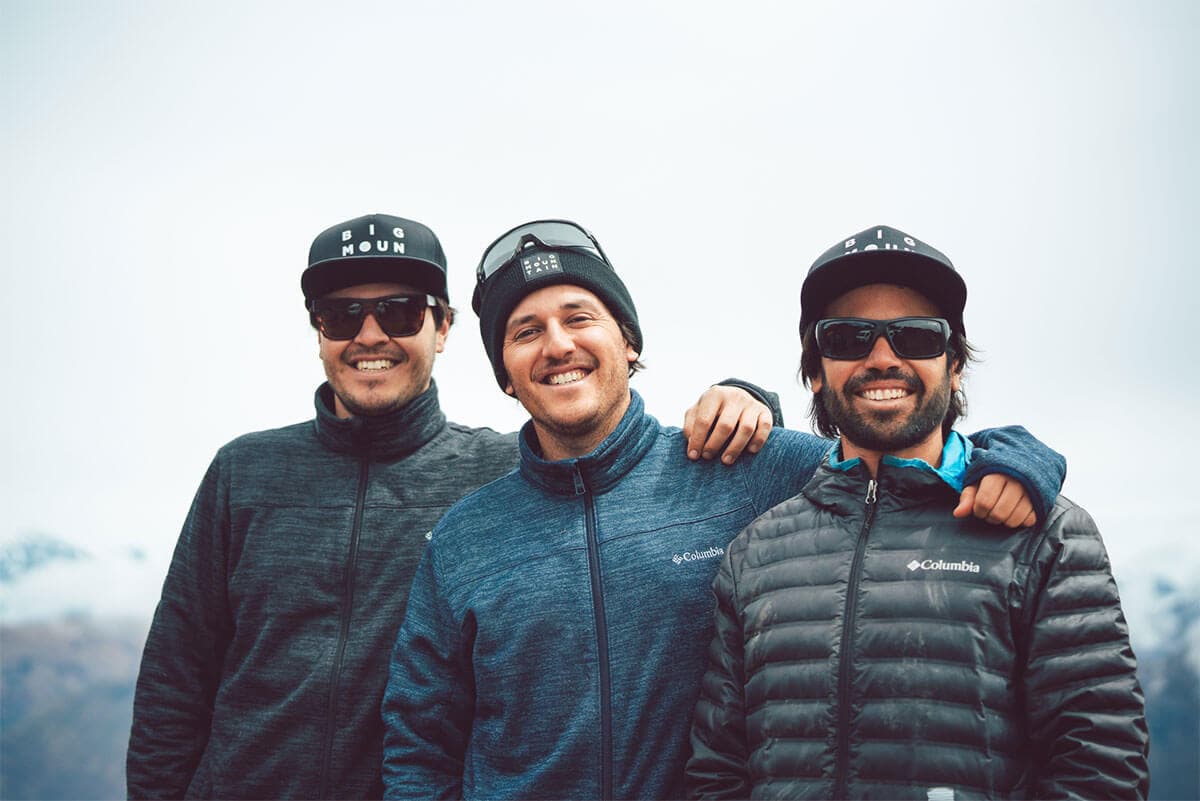 Our first ride of the trip was just ten minutes from Cusco in the Llaullipata Forest. We shuttled up to the start and pedaled off nice and easy. Many of us traveled to Peru from sea level, and it’s always an adjustment going from oxygen-rich air to the high altitudes trails. Each person acclimatizes to the elevation differently and some riders chose to take a high-altitude medication called Diamox while others found they don’t need it. Either way, altitude sickness is no joke and can ruin a vacation or possibly lead to more severe problems. 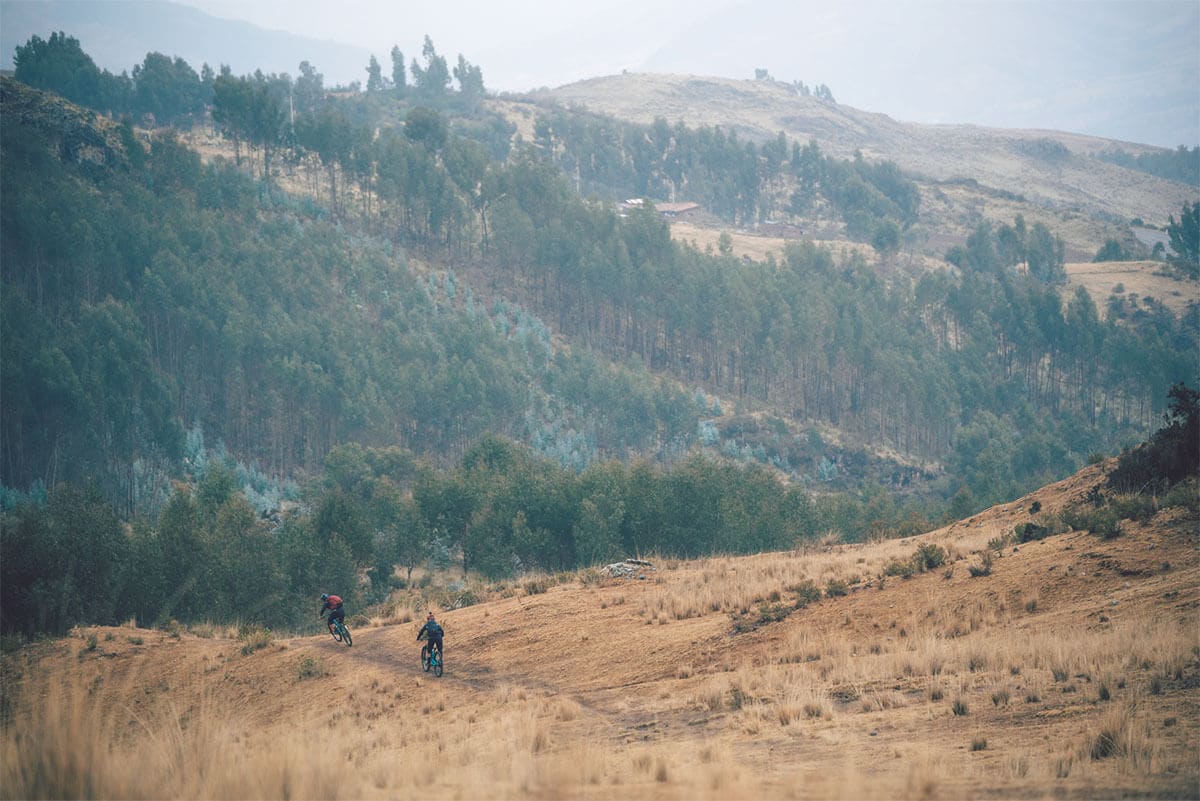 We eased into our first day of riding due to the altitude, but also due to the ruggedness of Peruvian trails. Hardly anything here is purpose-built for mountain biking, and the terrain and landscape changes quickly from "superflow" to "oh no!" Our guides warned us of upcoming and potentially dangerous exposure, and our group loved this first look at mountain biking in Peru while also meeting some of the locals. Chente, Nico, and Gabriel have worked tirelessly with communities, farmers, and landowners to bridge the gap between locals and the burgeoning mountain bike scene in Peru. A deeper dive into their story can be seen here.