We woke up this morning to clear skies. The storm from yesterday was long gone and today was New Year’s Eve in Nepal and the start of 2074.. their calendar is approximately 56 years and 8 months ahead of ours - the Vikram Samvat calendar. Om suggested that on this morning, before we do anything else, we go down to the river and wash our faces in the Marshyangdi for a figurative and literal ‘fresh start’. Having Om share his traditions with us so openly was something we welcomed every day. We were all here to listen and learn, and by day three this place was already making us into very attentive students. Having a peer into a completely different way of life from this aspect was something I had never experienced before. I’d been to many different places around the world but Nepal was different, there’s a vibe here.

The best part of the day was rolling out of town and passing by the local kids. What a sight to see them running out with hands up for a high-five – the sweetest faces with clear eyes and rosy cheeks. After riding through the center of Tal and crossing a bridge we rode through some potato fields and towards some steep staircases that skirted the canyon at the edge of the river. There were sections on the trail that required a bike carry and some exposure to be mindful of. After a good hour of steep staircasing, both up and down, the trail would eventually lead us back to the road where we’d continue on to Chame, the headquarters of the Manang District in the Gandaki Zone of northern Nepal. 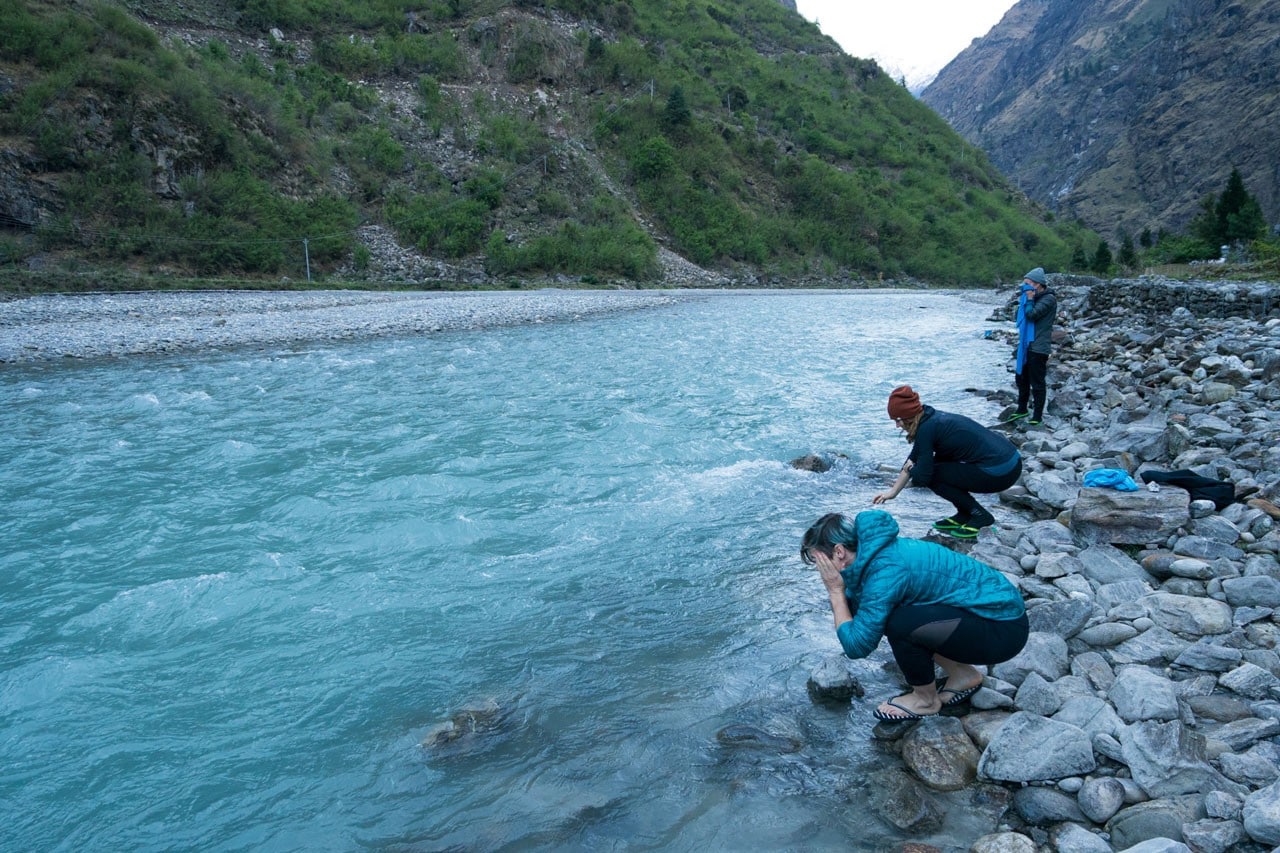 Our Fresh Start to the morning 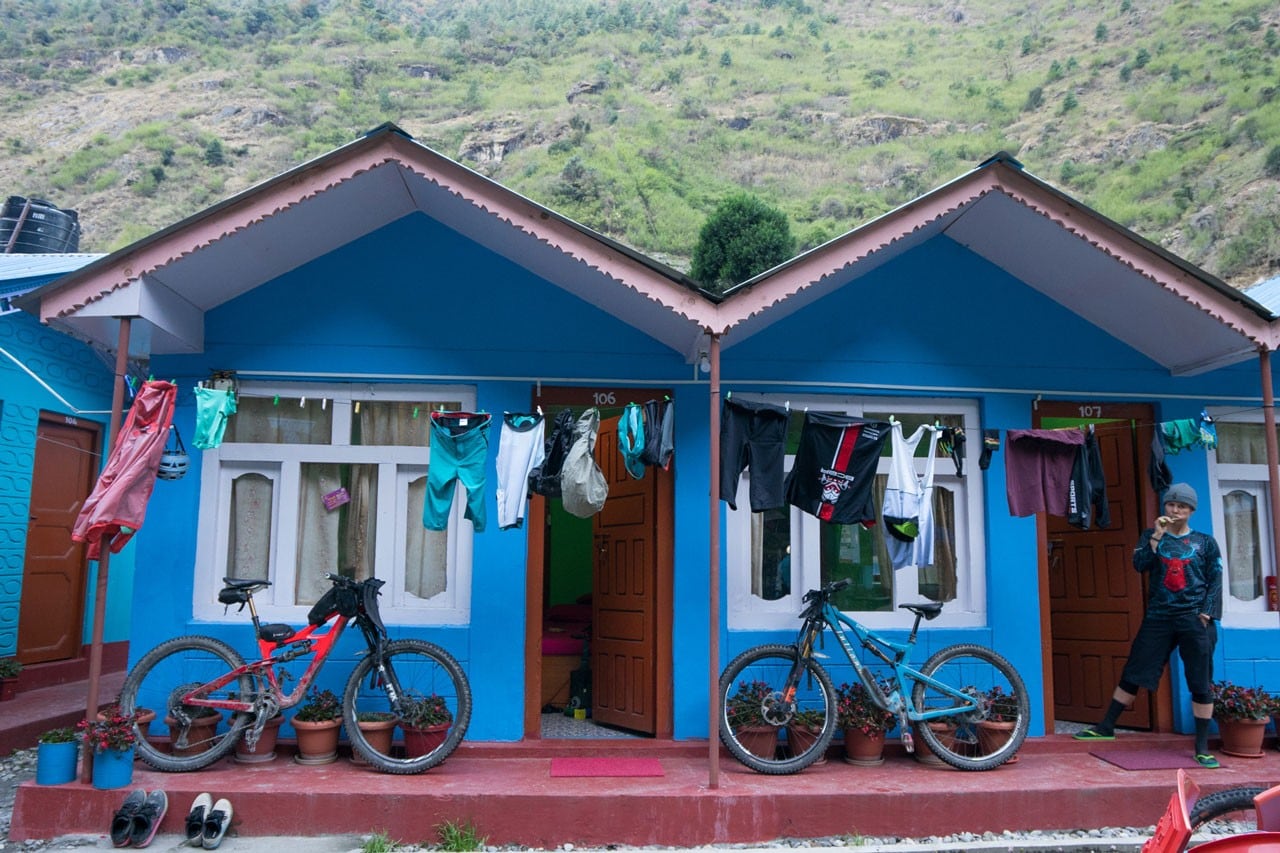 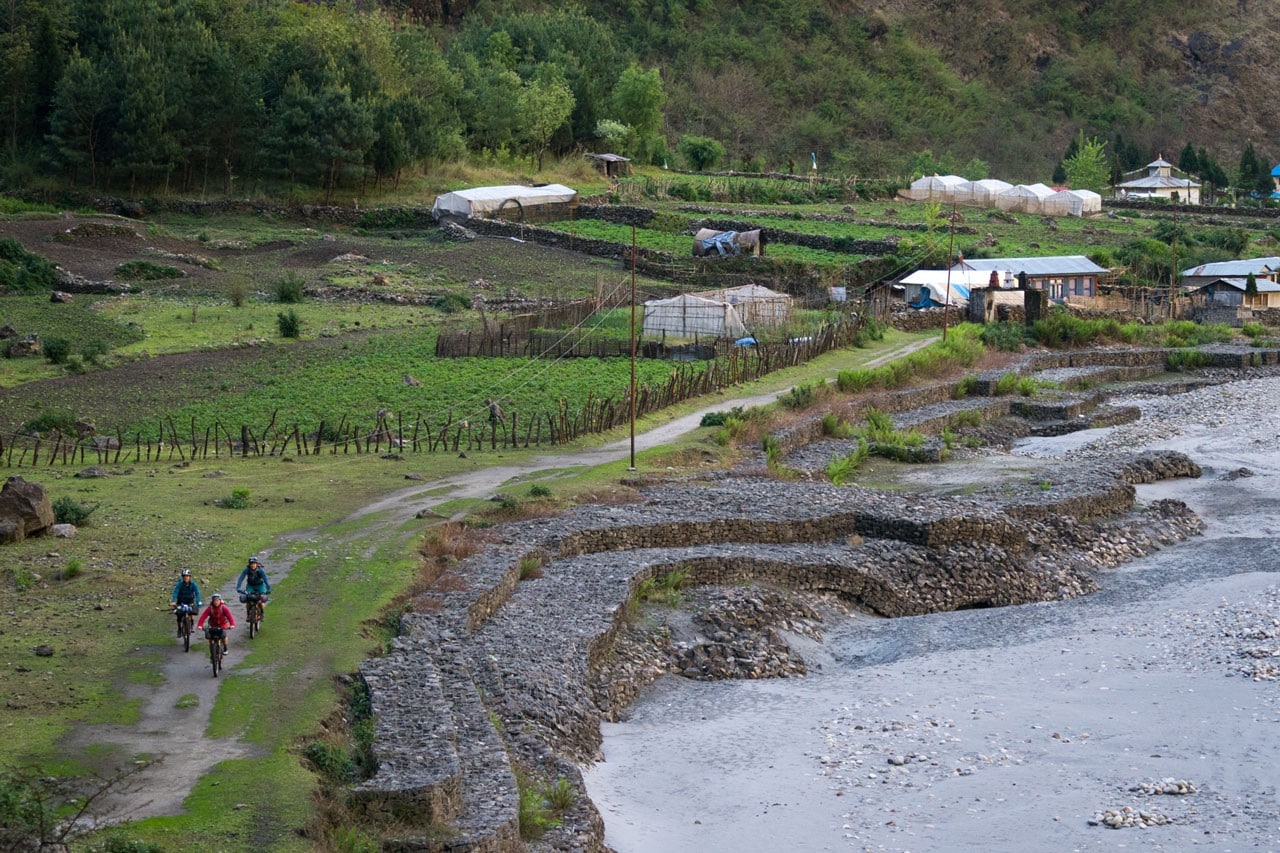 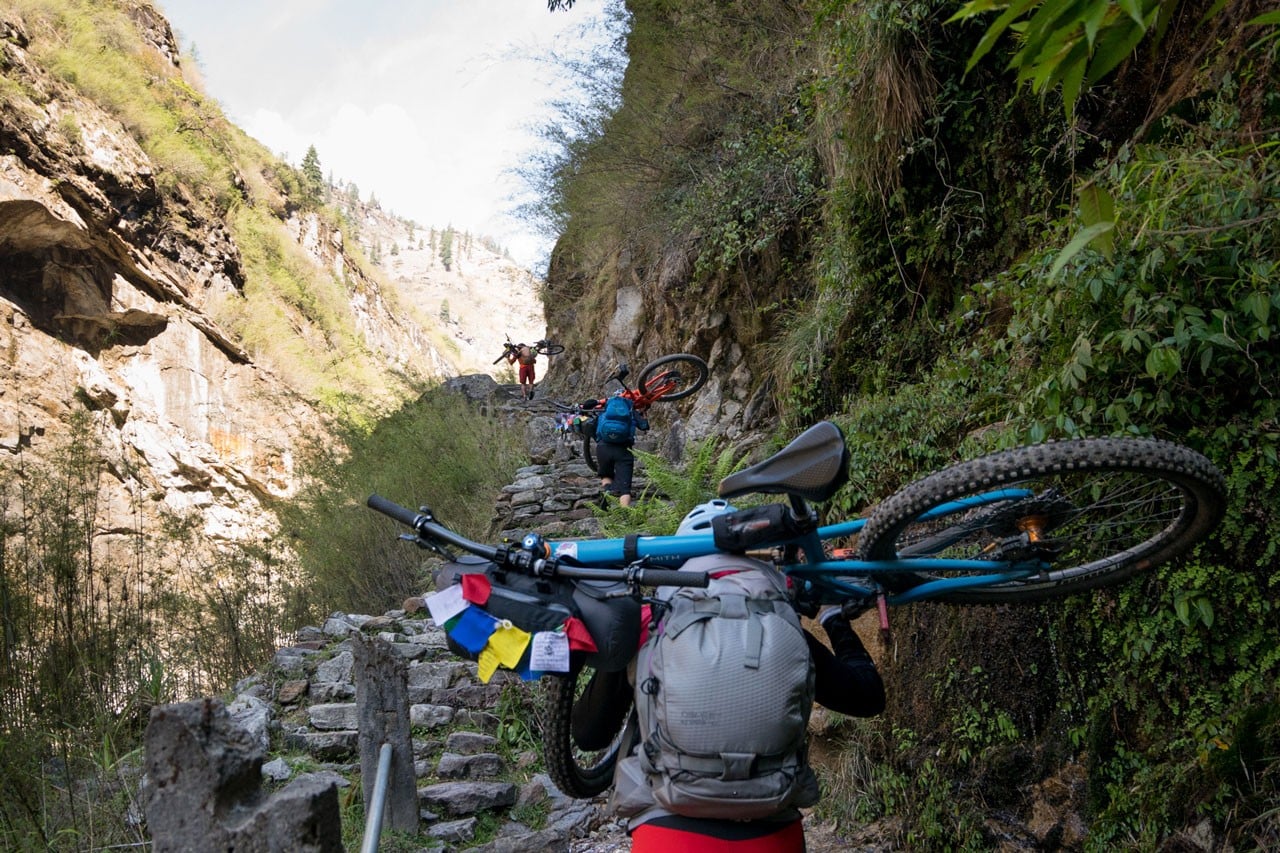 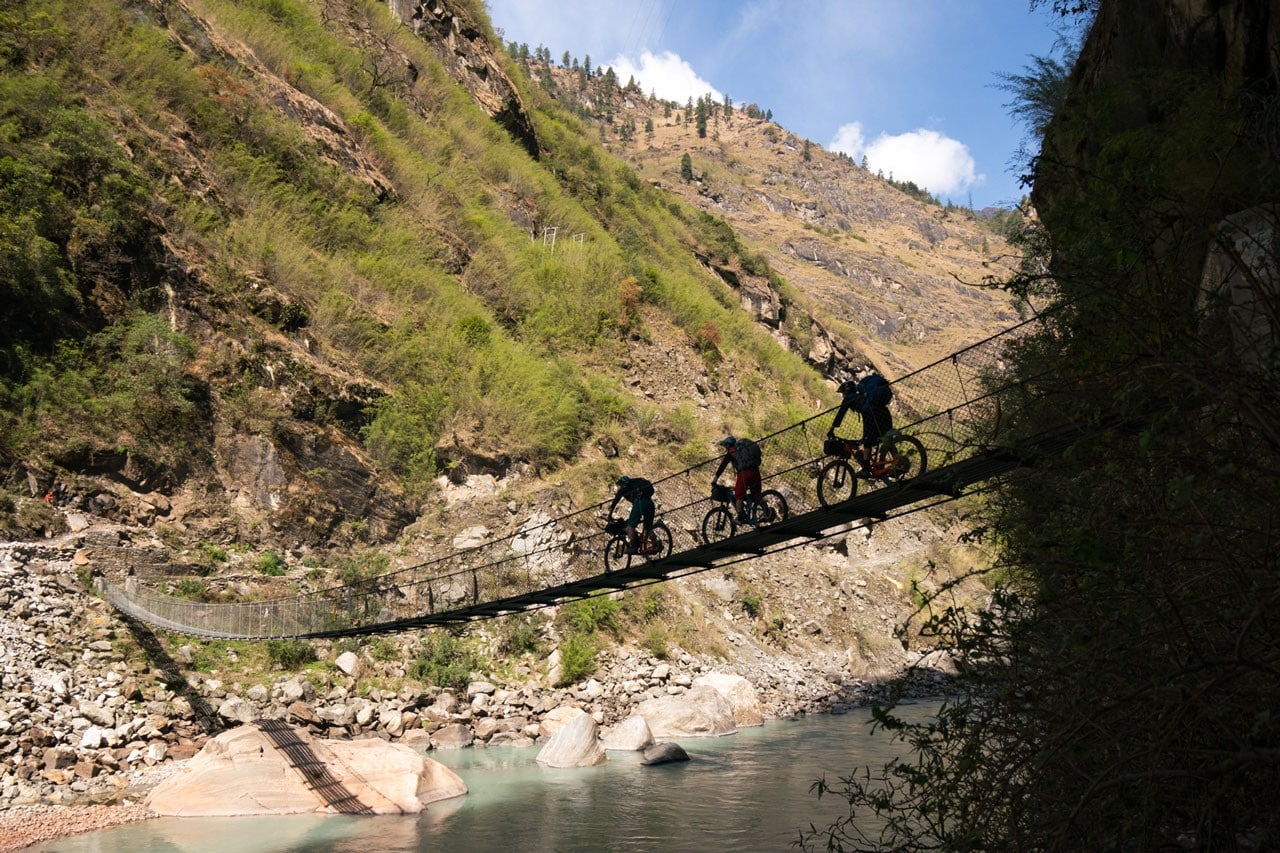 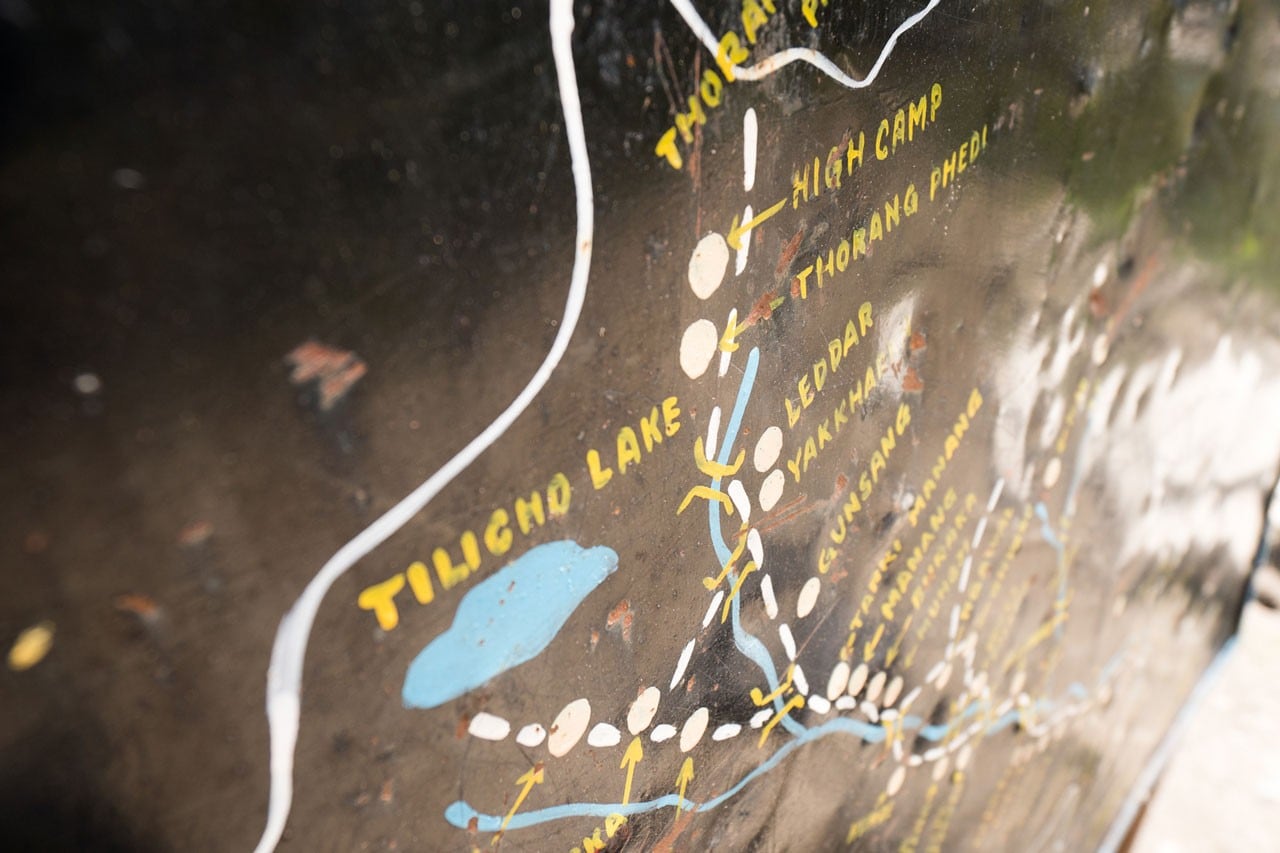 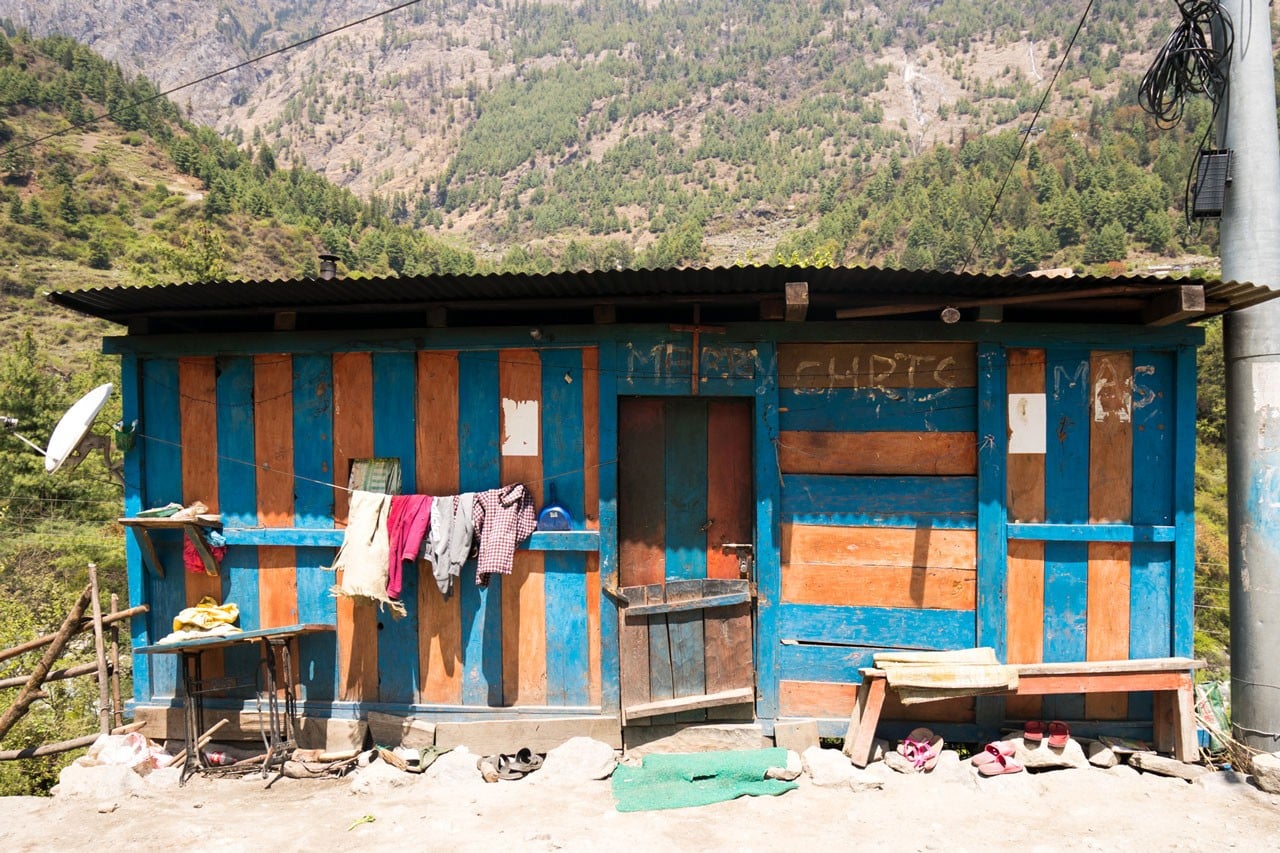 The terrain was changing as we wound our way higher and further up the valley, usually with the Marshyangdi river in view. Waterfalls are a typical sight here and no two are the same. Some spew right onto the roads and others are miles away in the distance travelling the entire length of a mountainside in fits and spurts. Om was dialed with our stops and today’s lunch could not have been more perfectly timed.

After a grueling climb coupled with group hunger pangs, we pulled off to a guesthouse where we were welcomed with big hugs by the matriarch of the place, all with a lit cigarette hanging out the side of her mouth. What a character this woman was! She entertained us for a good 10 minutes and loved connecting with our group. Hard not to have your heart warmed here. 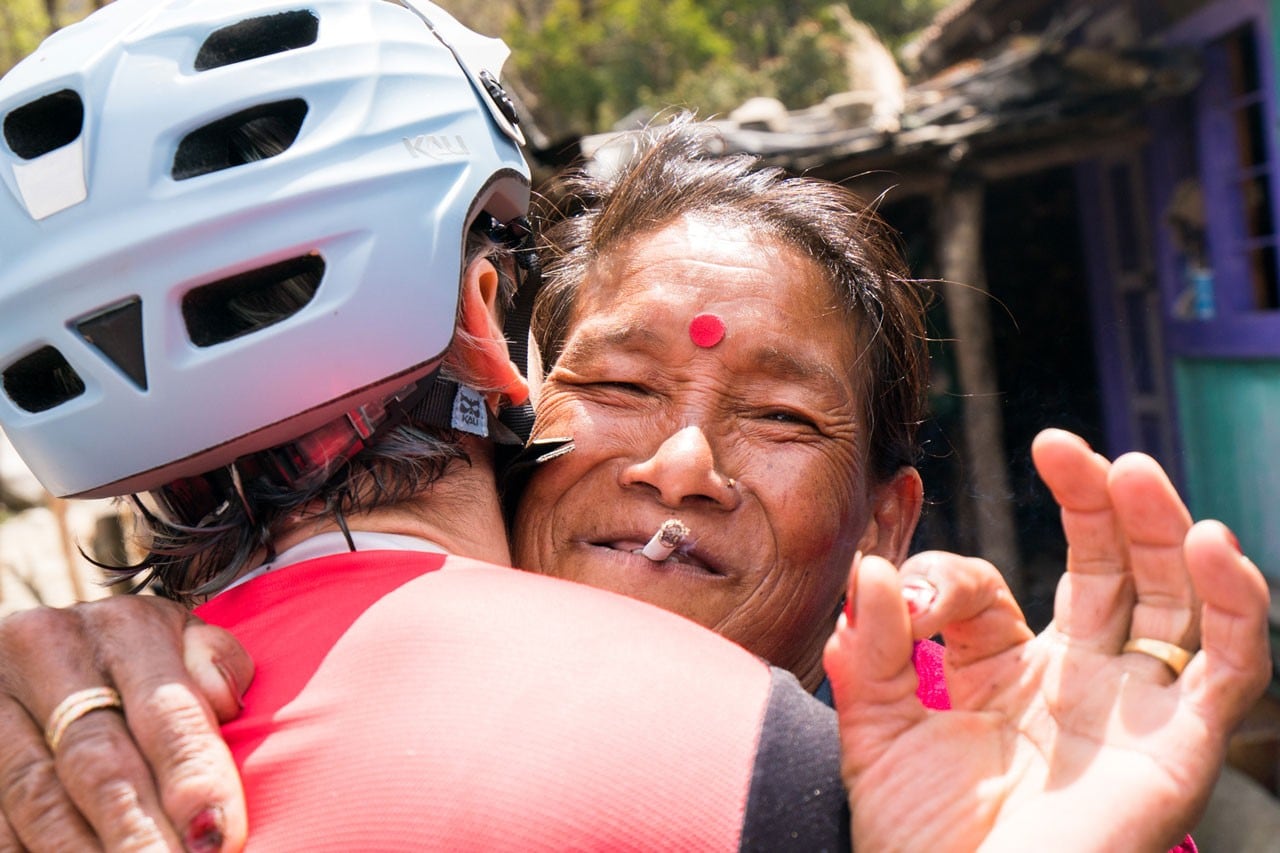 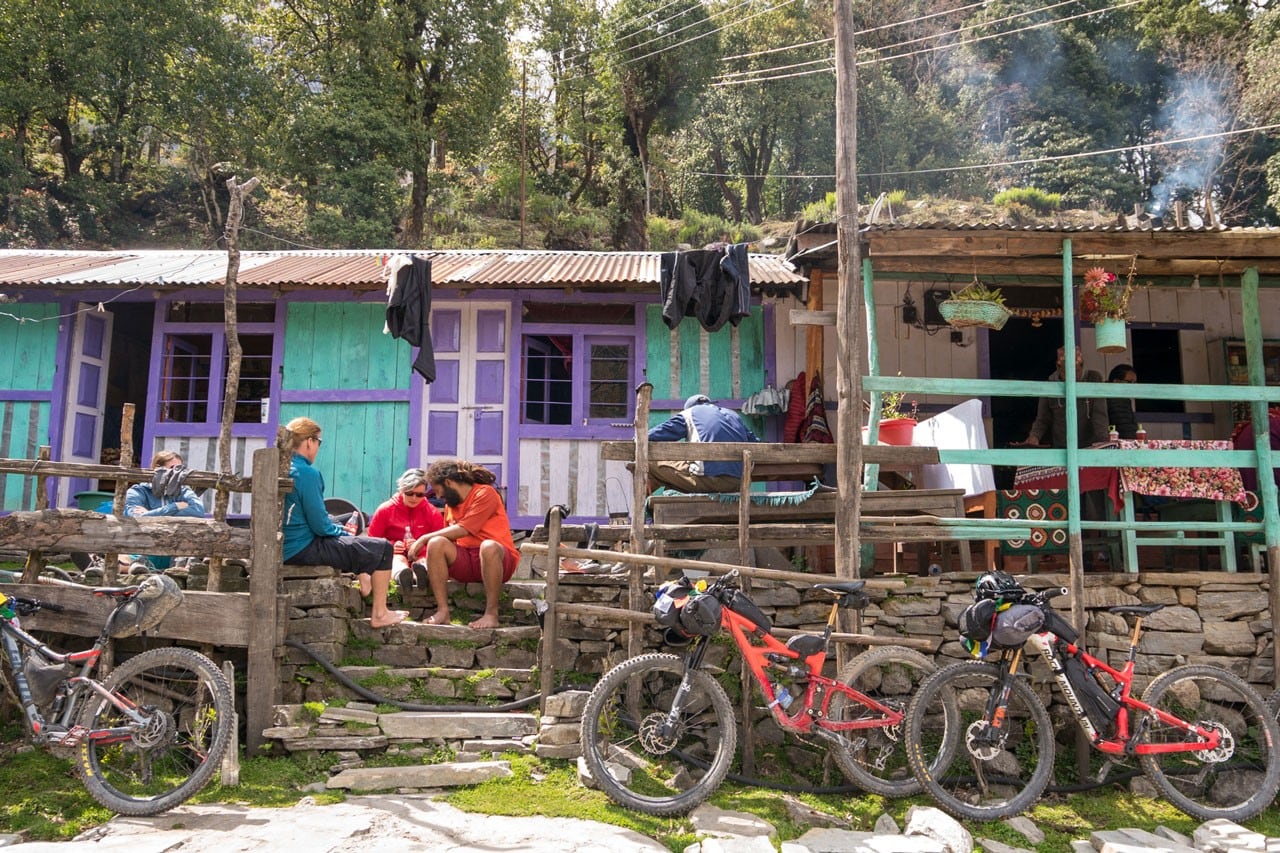 We pedaled another couple of hours after lunch and finally pulled into Chame. The Sangso Guesthouse was positioned at the base of a massive rocky wall and before we did much of anything it was time for beers and popcorn on the patio. The plan was to settle in, get changed and walk the short distance to a hot springs just five minutes from where we were staying. The guesthouse owner’s four-year daughter, Diki, jumped right in with us on the socializing. It was so much fun connecting with this little girl who we decided was Jaime’s ‘spirit animal’…they were definitely cut from the same cloth. We loved her energy and enthusiasm to just have fun - something our group could definitely relate to.

On our way to the hot springs we ended up getting separated into two groups; Kelli, Om and Leslie were behind us and Jaime and I made our way to the hot springs’ source. Once we got there and realized it was more of a local’s place to do laundry and other household chores that required warm water, we turned back to join the others. As we headed back along the trail we could hear a Bollywood beat going off in a small hut above the path, so of course we went to inspect. Leslie, Om and Kelli were already in there dancing their faces off. Somehow someway we stumbled upon a Nepali New Year’s party in a 10x20 ft cabin - the energy levels were high bringing in 2074! A boom box was blasting and the people were too - so what if our legs were blown from climbing all day!? We stayed and danced (hard) for at least an hour. When it was time to go they kept asking us to stay for ‘just one more’…we had about four last songs before we finally made our exit for dinner. 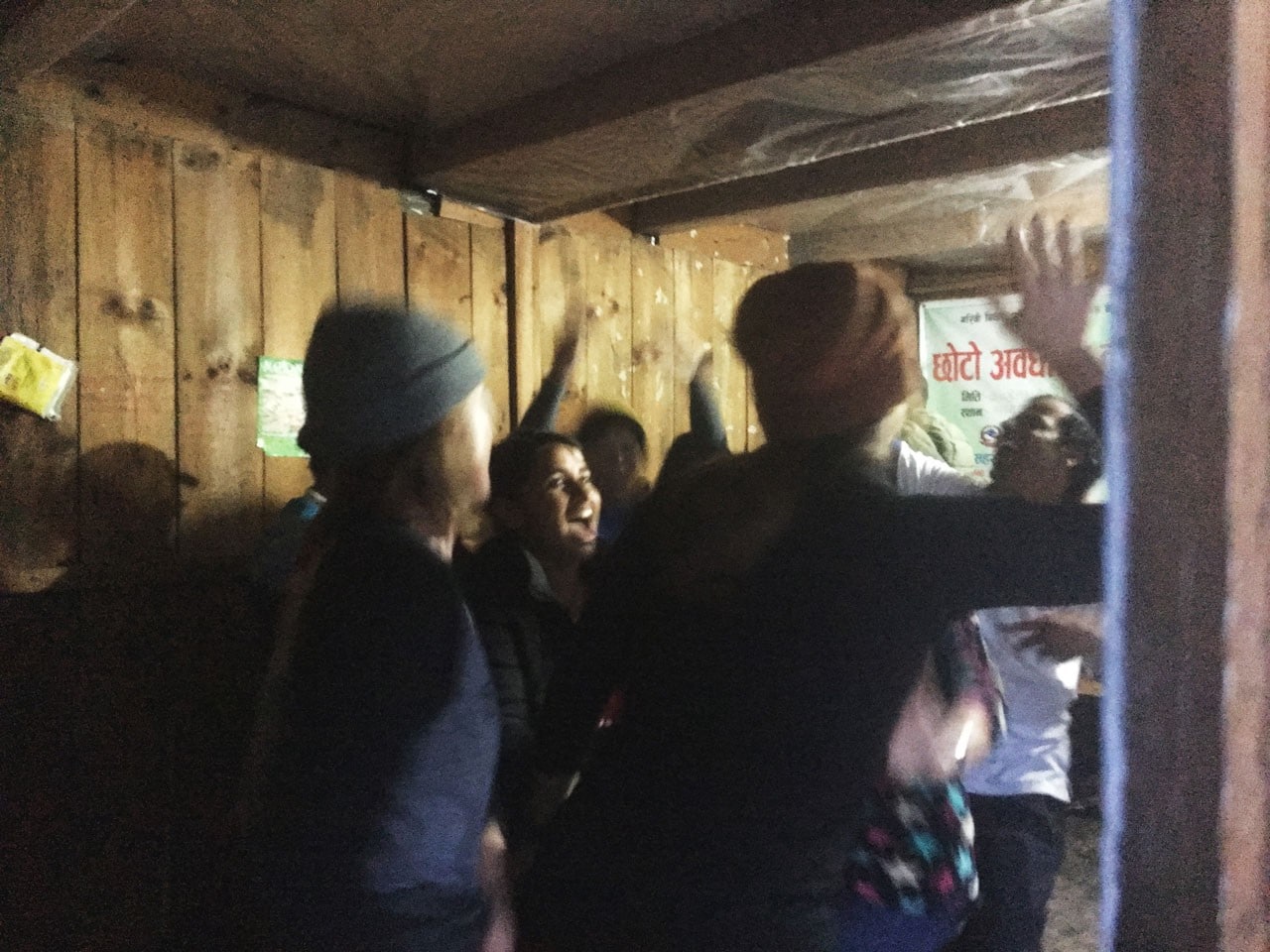 Our next stop along the route was Manang, which sits at 3540 meters / 11,682ft. It’s the end of the motorized road and also the point at which we cut ourselves off from beer, at least for a few days until we got over Thorong La. Alcohol dehydrates and at this point in the trip we needed to start getting serious about altitude. We climbed into a totally different eco system today. More open, arid and dusty - we were leaving the sub-tropical zone behind and with every turn in the road we were presented with new views and angles of the Annapurnas. 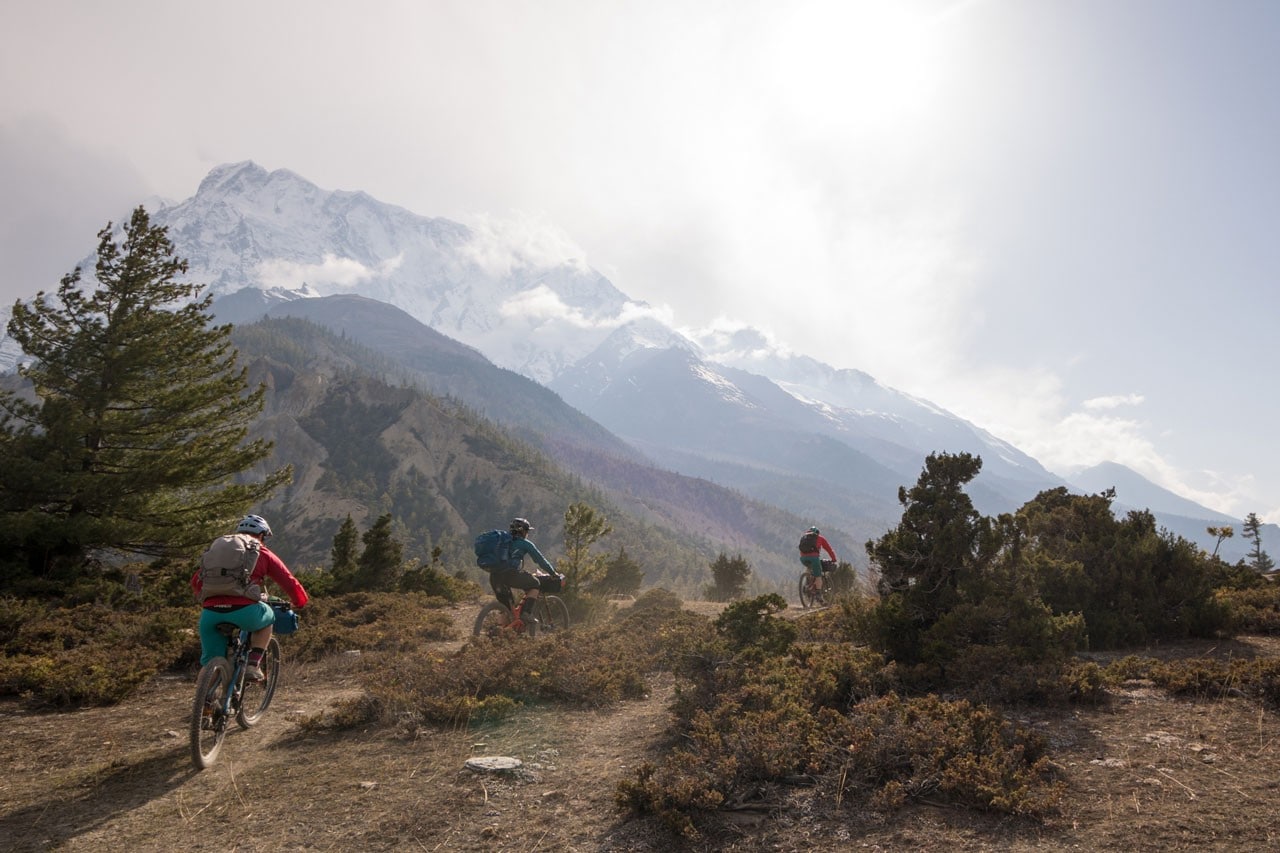 Breathtaking and stunning, seeing is believing what you almost can’t believe. These mountains of rock were twenty times the size of anything I’d ever seen before and the sheer scale of it was almost overwhelming. This day was the only time we saw another group of mountain-bikers, somewhere in the Pisang region, a group of four Russian guys going the opposite direction of us. We stopped briefly as riders in this area are still a rarity, so we both wanted to stop and take a look at each other. We had a brief chat lasting maybe a minute or two, and then rode on.

The final grunt into Manang is a super steep 200 m long dusty road where you enter the city through a massive metal arch. Then it’s onto the classic flat rock Nepali cobblestones and into a bustling city in the middle of massive mountains, peaks and high dessert. 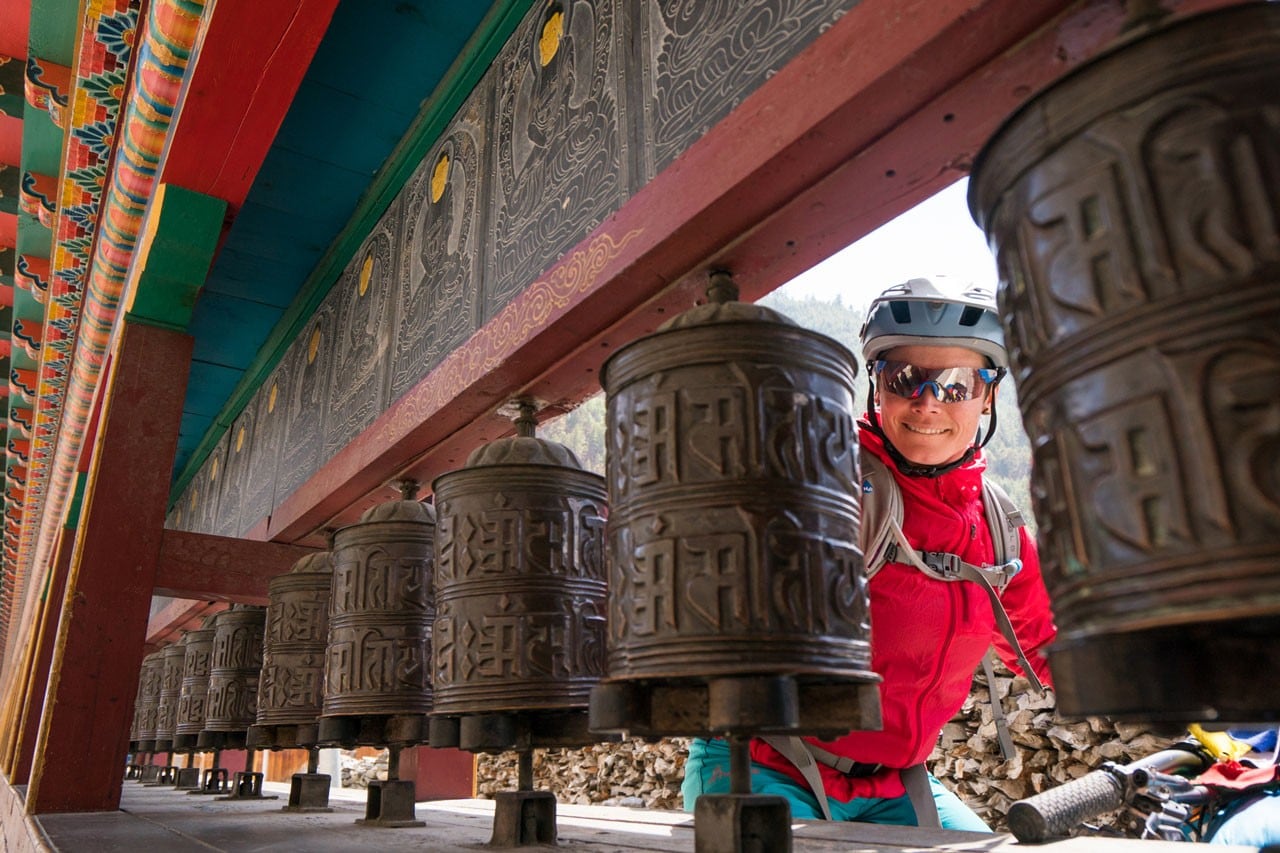 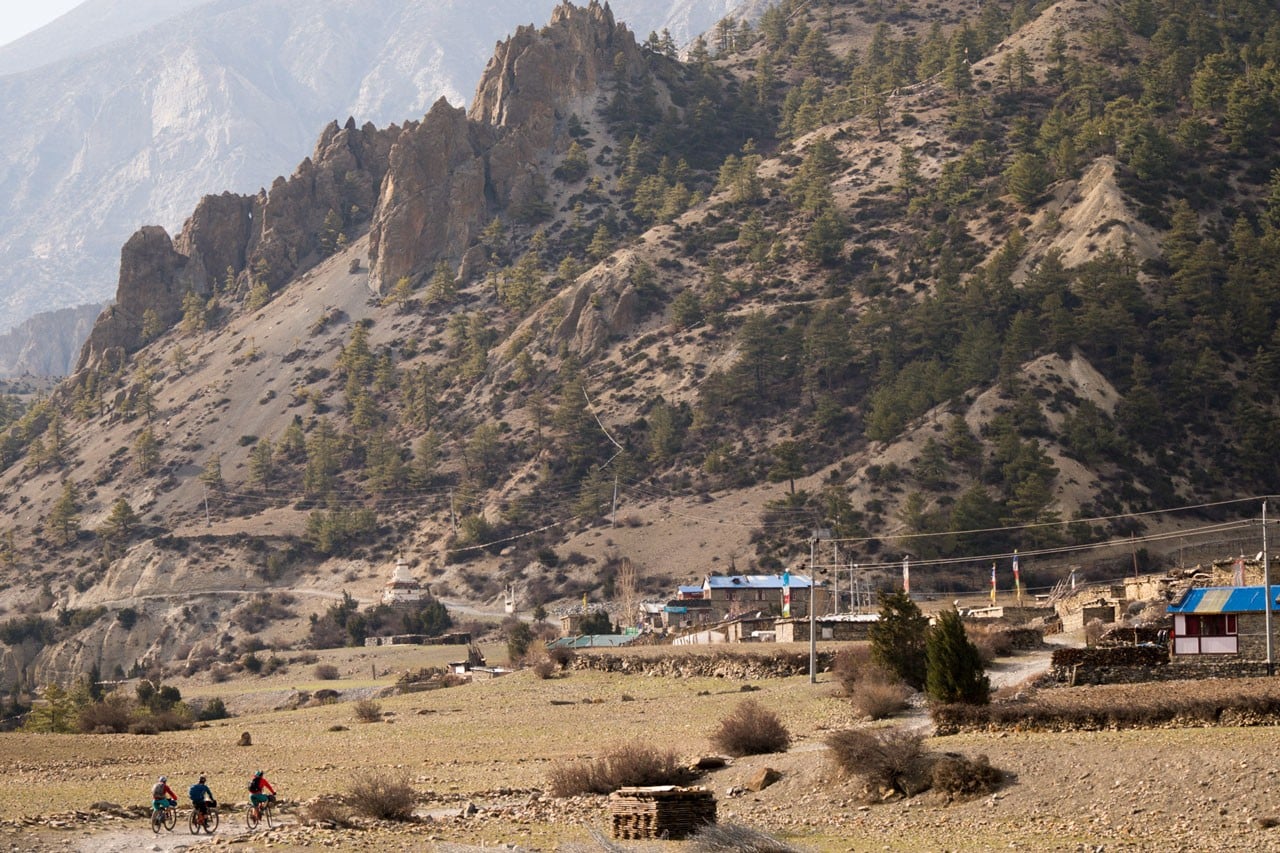 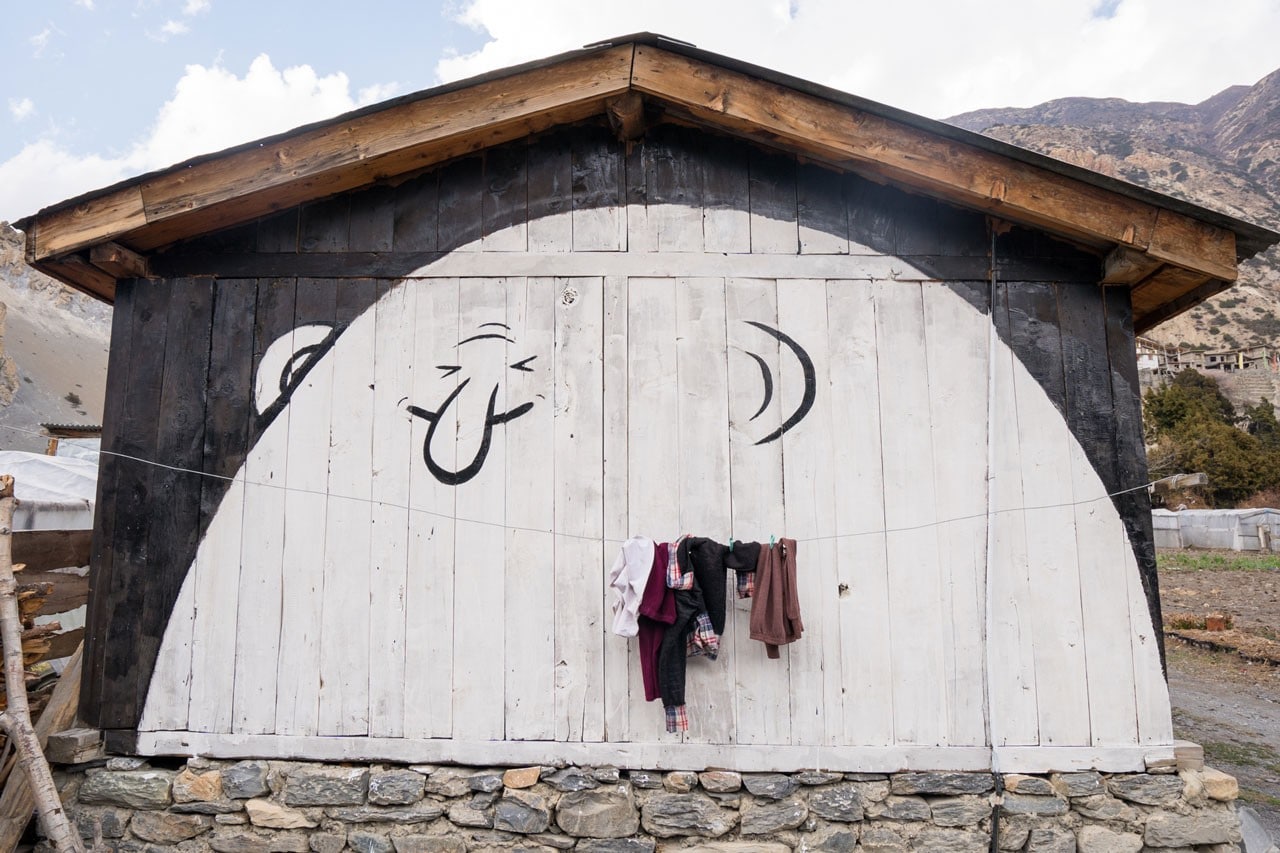 It’s a good thing we were in a stocked guesthouse with clean sit-down toilets and hot showers. Day five would be a rest and acclimatization day, the only day we wouldn’t ride bikes. And good thing, too. Our first night in Manang is when Jaime got hit hard by an intestinal bug. It woke her up in the middle of the night and didn’t let up. She barely made it out of the room for one of the episodes, and by morning she was a fraction of her normal self.

We decided as a group that we’d take a walk with her to the local clinic. She was getting intermittent stomach cramps that were doubling her over so why not nip whatever we could in the butt with a doctors blessing? An older woman from the UK was the resident doc on hand and had great advice for us. She said most people travel to Nepal with the wrong antibiotics, usually Cipro. The drug of choice for killing intestinal bugs in this part of the world is Erythromycin. Luckily we’d all been to travel vaccination clinics before we left and were armed with the right medication.

We did a short hike to Lake Gangapurna that afternoon, a small turquoise glacier fed lake just 10 minutes below town. After skipping rocks and marveling at more mountains we headed back to Manang for the local altitude mountain sickness talk that happens in town each day at 3pm. This was a great session to attend. I’d done a ton of research online, asked around and carried the Diamox altitude medication with me, but I learned new information here. There’s definitely time to respond to impending altitude sickness so knowing the drill was helpful for all of us. 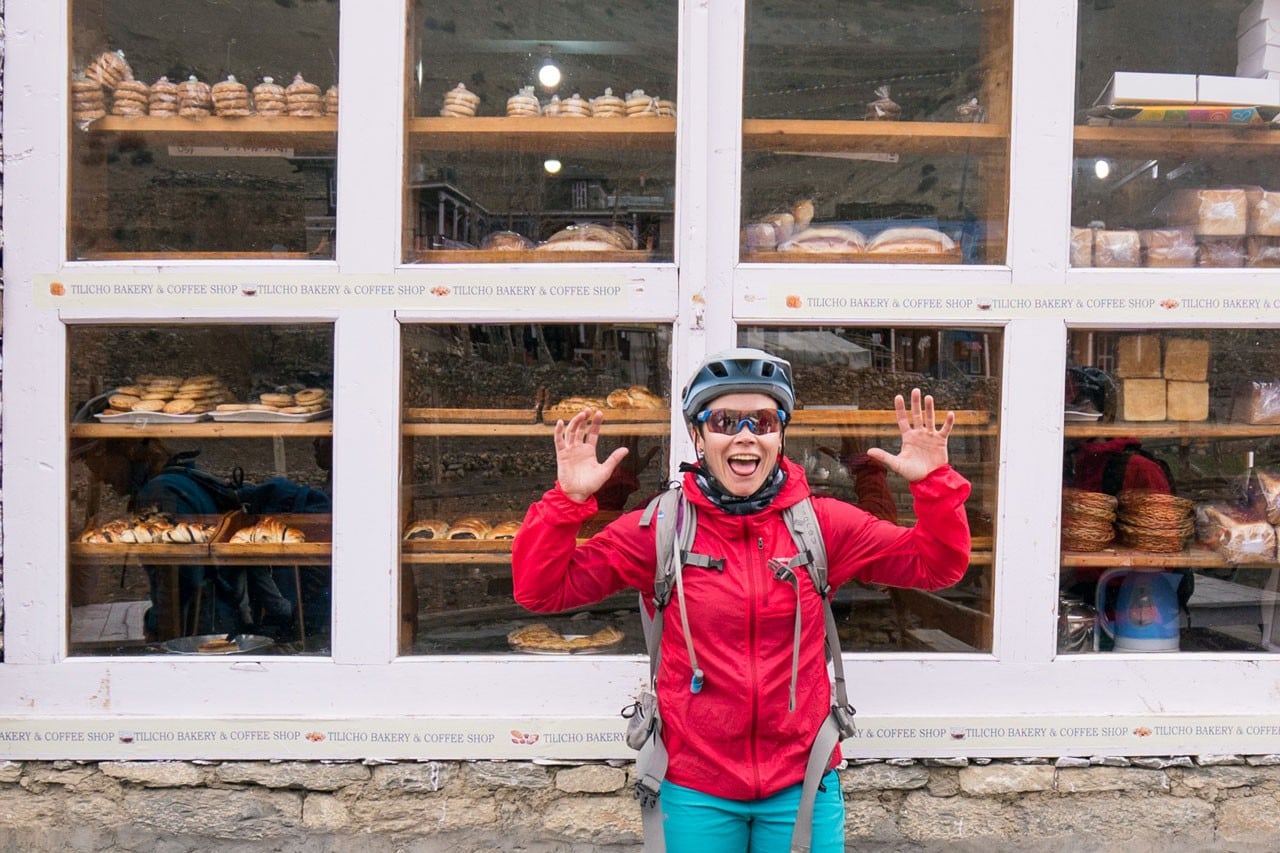 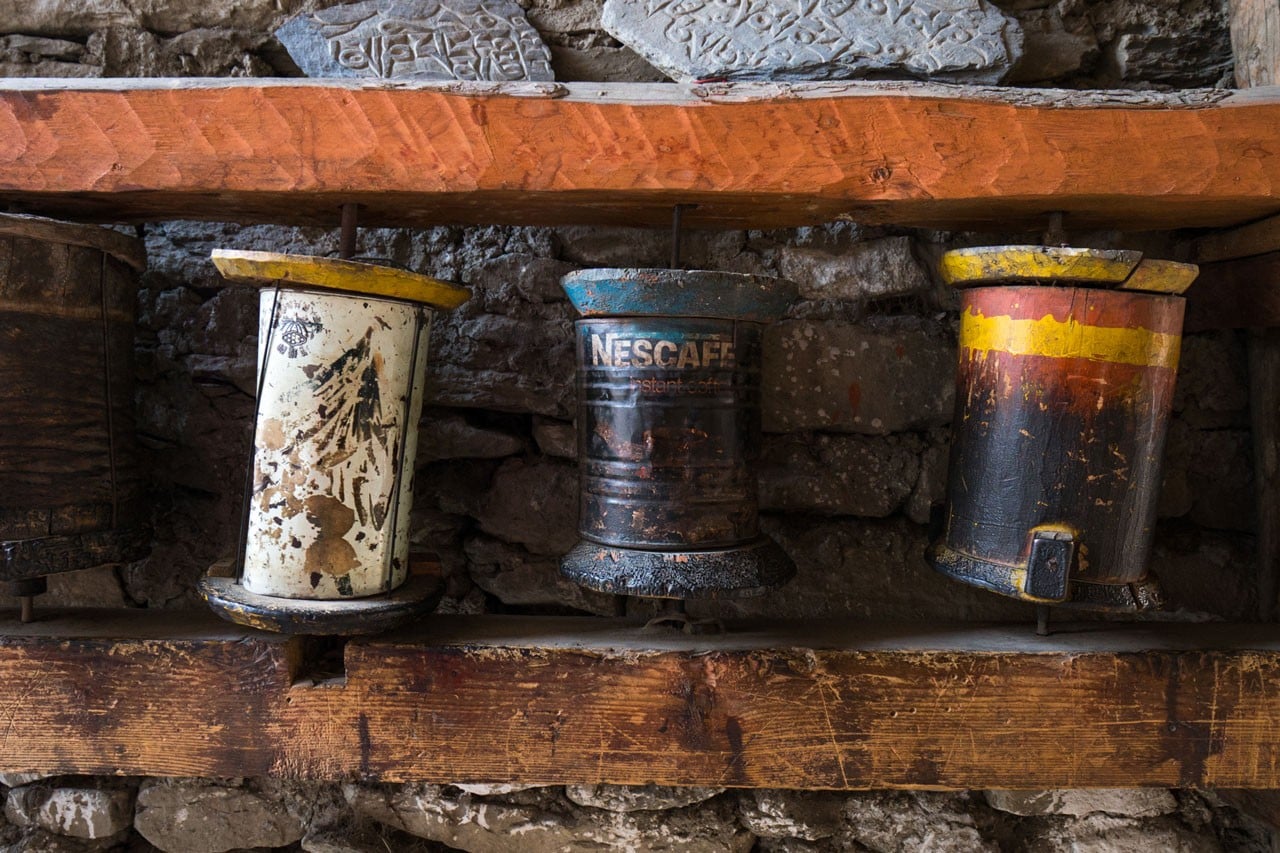 Our next stop on the Circuit, the town of Letdar, sits at 4200 meters / 13,860 ft. The distances between towns was getting shorter but the terrain steeper and the air thinner. Om was having us stop often to drink water and take small breaks. One of these breaks was in a little village called Gunsang, literally right on the side of the trail. This is where we were introduced to sea buckthorn, a deciduous shrub with tiny berries that’s made into juice or oil. It grows naturally in this rugged high country and is full of antioxidants, vitamins and minerals - turns out it’s an excellent replenishing beverage for doing excessive exercise at altitude. 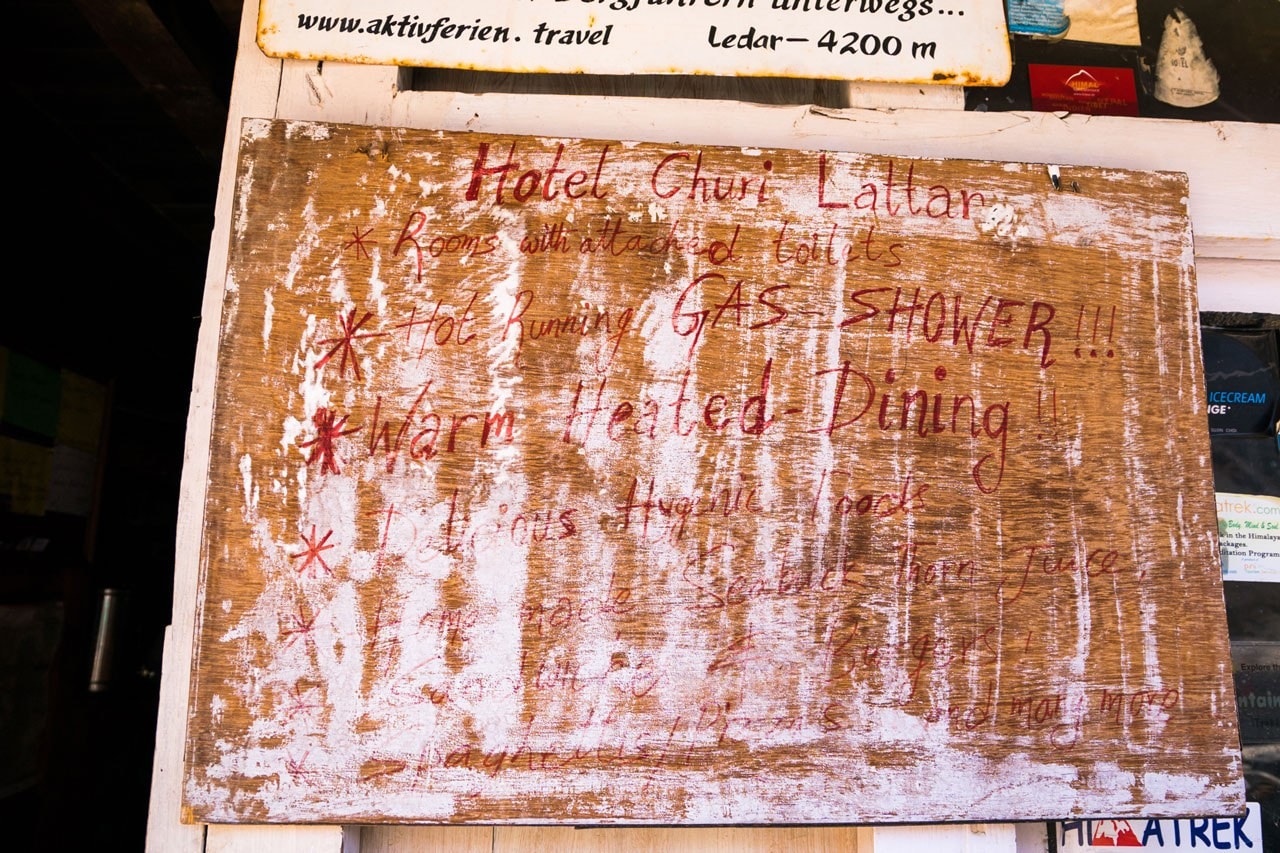 We learned at the altitude mountain sickness clinic that it’s important and recommended to make two overnight stops before going up and over Thorong La pass after Manang. Om had already planned for this and scheduled our stops accordingly. The first being tonight in Letdar, and the second, High Camp – the last place with accommodation before the pass. There were some substantial sections of hike-a-biking as the terrain became less treed and more screed. After a few hours of riding and pushing we finally docked at Letdar and checked into our guesthouse. Here we learned that there is no right way to spell ‘Letdar’…the multiple signs on the front of the building welcoming you to Letdar, Leddar, Ledar, Latdar proved it.

Once we had a chance to take five it was time for our acclimatization hike. We went for a ‘casual’ hike up 500 meters / 1650 ft behind the guesthouse and moseyed back down to sleep at the ‘lower’ elevation before continuing on to High Camp the following day. We were tired, but the views and expulsion of high altitude flatulence was well worth it. 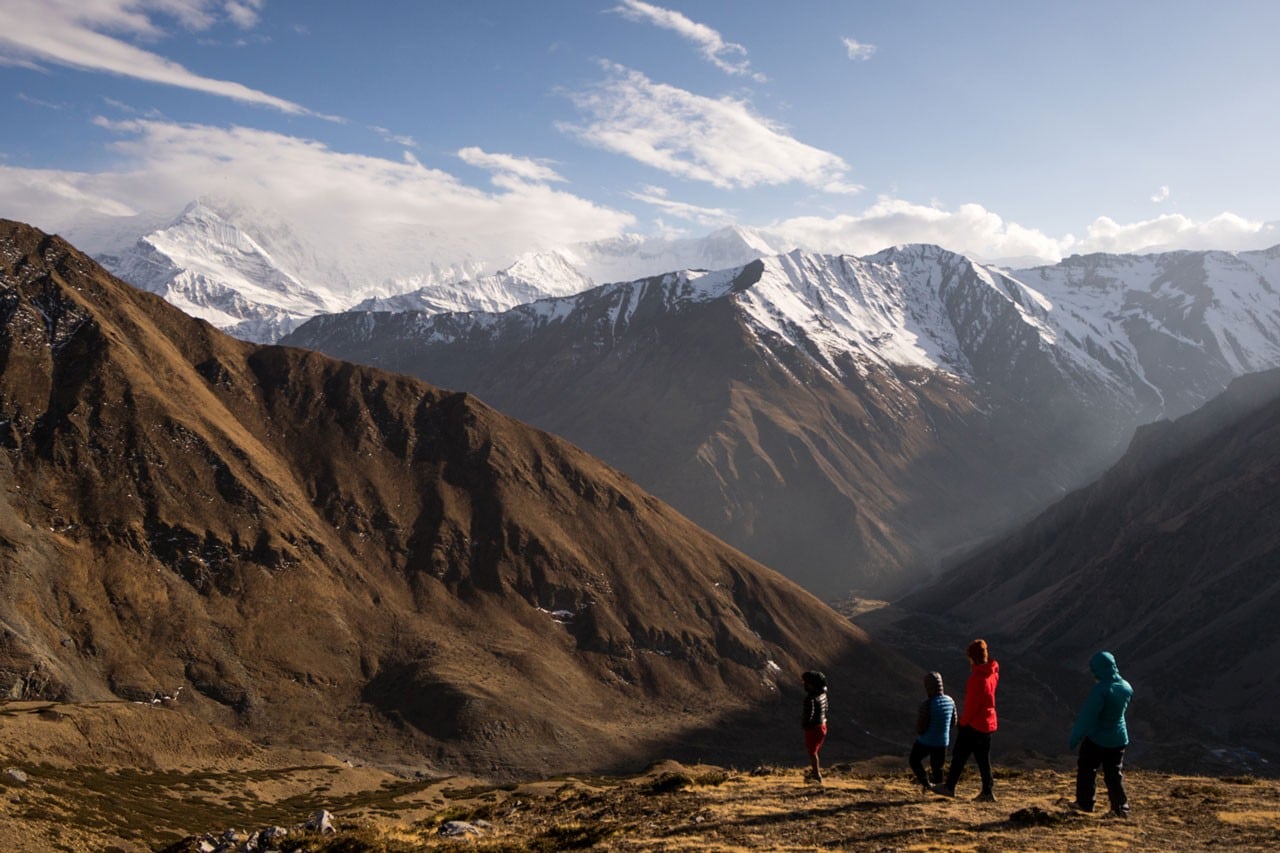 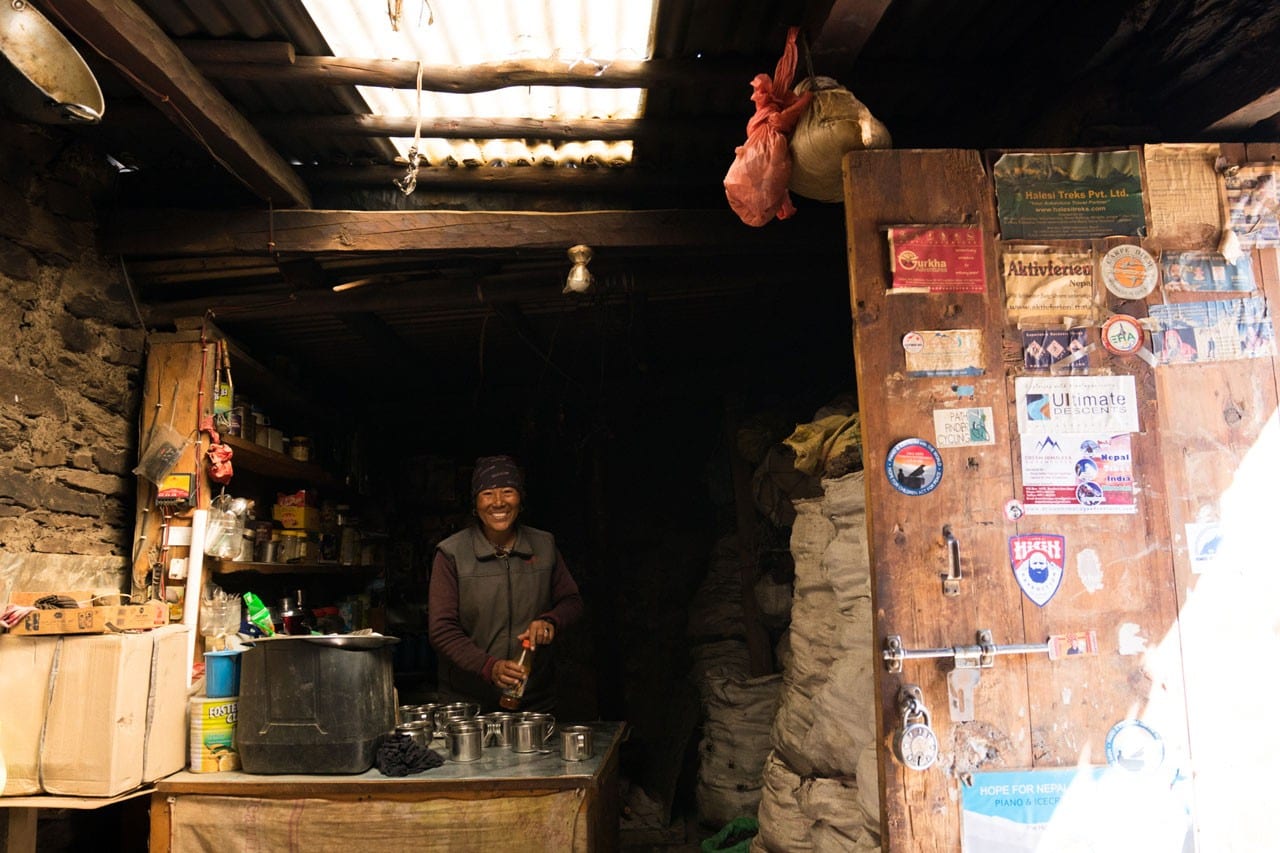 Leslie Kehmeier is a Colorado-born outdoor adventure photographer and mountain bike nerd who does not currently call anywhere home. Always on the go, Leslie is most comfortable running through airports to catch a flight or steering the wheel of her Sprinter van (Henry) in search of good food, amazing coffee and marking another place off the list in her quest to tell yet another story about life outdoors. Follow Leslie’s travels via Instagram @thewideeyedworld or through her website: thewideeyedworld.com.