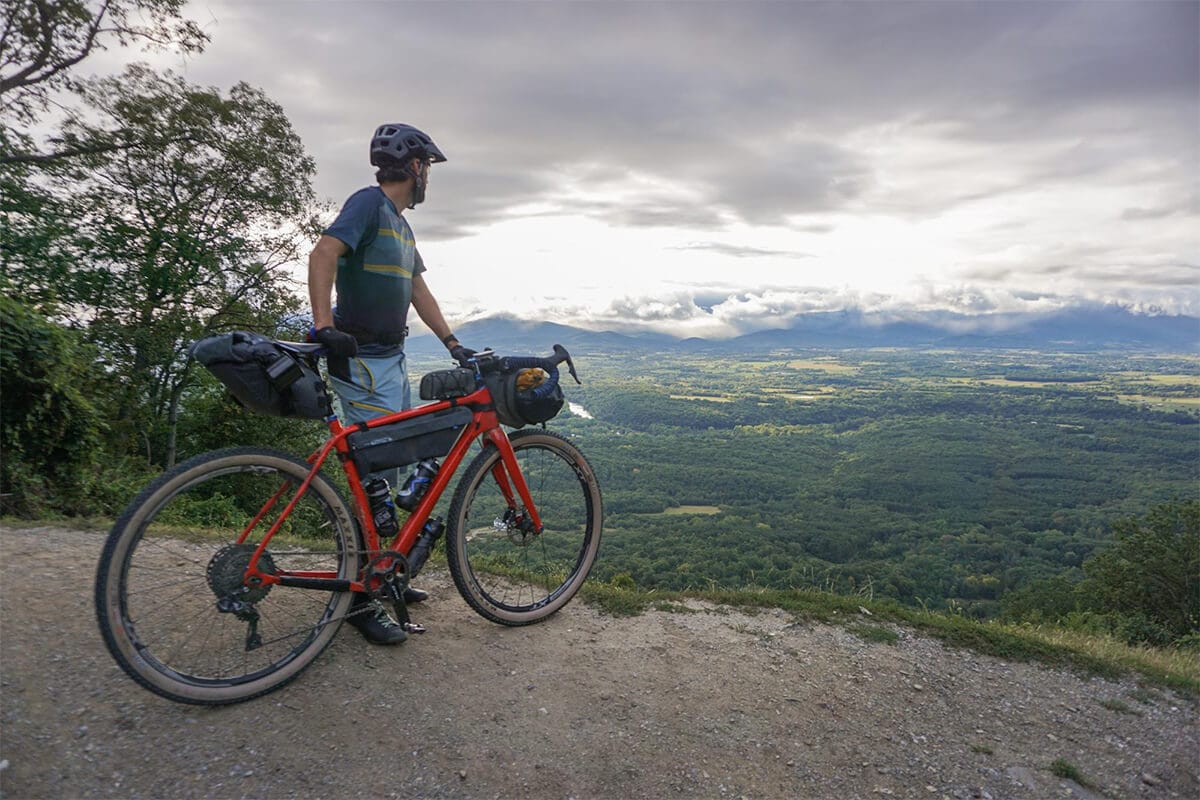 Life, family, and work commitments can often derail big bikepacking adventures into the wilderness. Multi-day events and races are just plain hard to fit into a busy schedule. But the overnighter, the less than a full day S24O (sub-24-hour-overnighter), is a great way to get out and enjoy the bikepacking life without the full commitment.

A quick trip through the George Washington National Forest was something my friend Barry Croker and I talked about for some time before we aligned our scheduled to make it happen. The idea was simple, go explore the trails and roads through the national forest and have a night out under the stars with our bikes. Should we take mountain bikes? Or do we stick to gravel roads? That was our first question to conquer when designing the route. With tons of chunky east coast rocks and steep climbs, the trails in this area are better suited for mountain bikes. But there were also a lot of great gravel roads and somewhat tame jeep trails that we wanted to include as well. 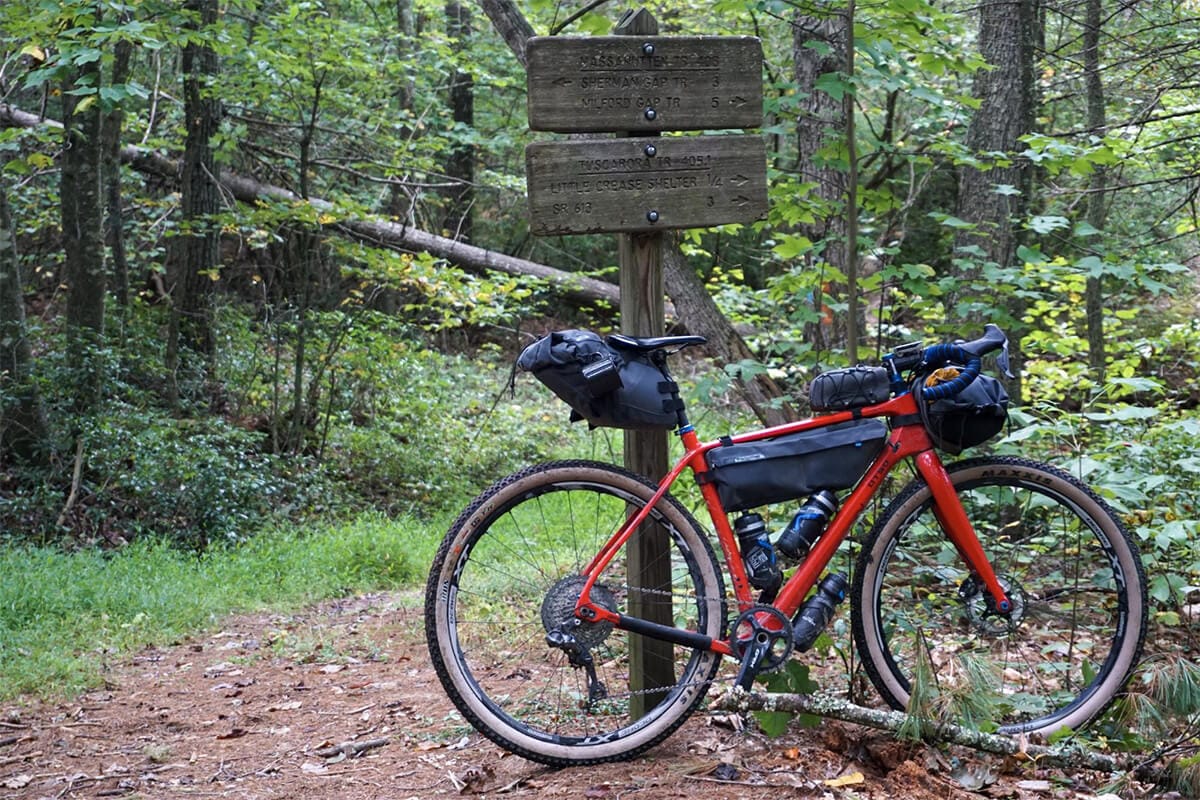 In the end, we decided to cram the widest possible tires into our gravel bikes and see how much we could get away with. We also decided to pack our bikes independent of each other, no sharing the weight or gear so that we could test our solo setups. The beauty of quick S24O overnighters is that they can serve as great proving grounds for longer trips.

Getting the trip started, Barry and I both ducked out of work early and headed to the mountains hoping to get wheels down around 4 p.m. The weather was unusually hot for September with highs in the 90s. But the temperature would drop quickly as the day turned to night.

We started our ride and quickly began our first climb up a long, gentle fire road through Mud Hole Gap. Once at the top, the road turns to a rocky descent with multiple creek crossings. This was a great way to start the trip and put our bikes and gear to the test.  And by the time we made it through the gap, we were all smiles. The bikes were doing way better than we thought they would on this type of chunky terrain! Onwards! 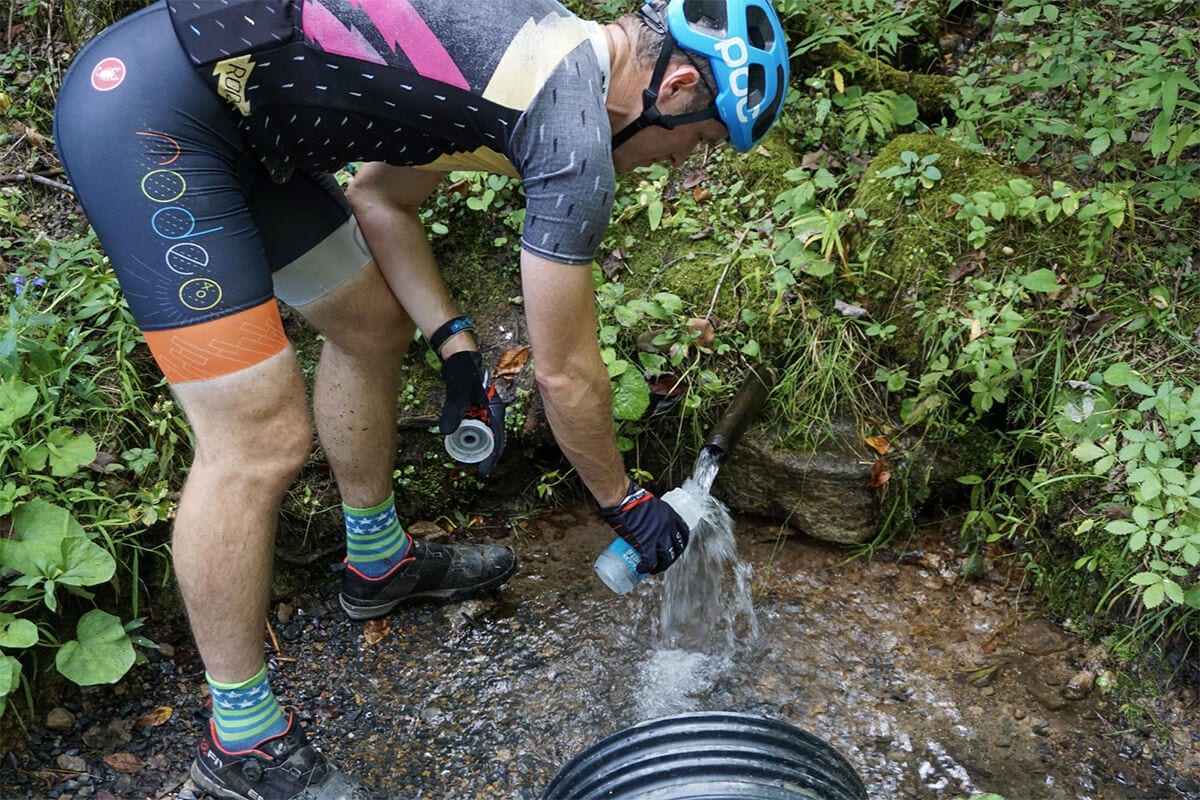 Stopping at a piped spring to chug and fill up our bottles, we then headed out on a smooth gravel road toward a well-known Jeep ATV trail known as Peters Mill. Barry had ridden this section before and had me a little concerned after describing it as having a lot of baby head rocks and as pretty rough going the last time he rode it. Despite our uncertainty, the bikes surprised us once again and handled the trail with just enough bumpiness to keep us on our toes but not so much to make it arduous. Even with dodging mud holes and stopping for a few pictures along the way, we were making good time.

As the sun was setting, we had one more pass to get through before our planned spot to camp. Barry had a dynamo light set up on his bike, and with the help of the full moon, I hopped on Barry’s wheel and followed his line on a super-fast and fun gravel decent.

We stopped by a campground that had water and filled up our bottles before heading farther up the road to set up our own camp. After making quick work of setting up our shelters and eating dinner we were ready to get some rest for the bigger day of riding to follow. Waking up the next morning, we were both relieved that the predicted storms that were supposed to hit us throughout the night had missed us completely. A quick 15-minute shower rolled through as we were making breakfast but it never materialized to more, thankfully. Day two was going to be a big one with a paved climb up Edith Gap to start the day. As we reached the summit of this climb, we were in awe of the views. The sun was burning off the low cloud layer, and in the distance, we could see Shenandoah National Park and the peaks still in the clouds. 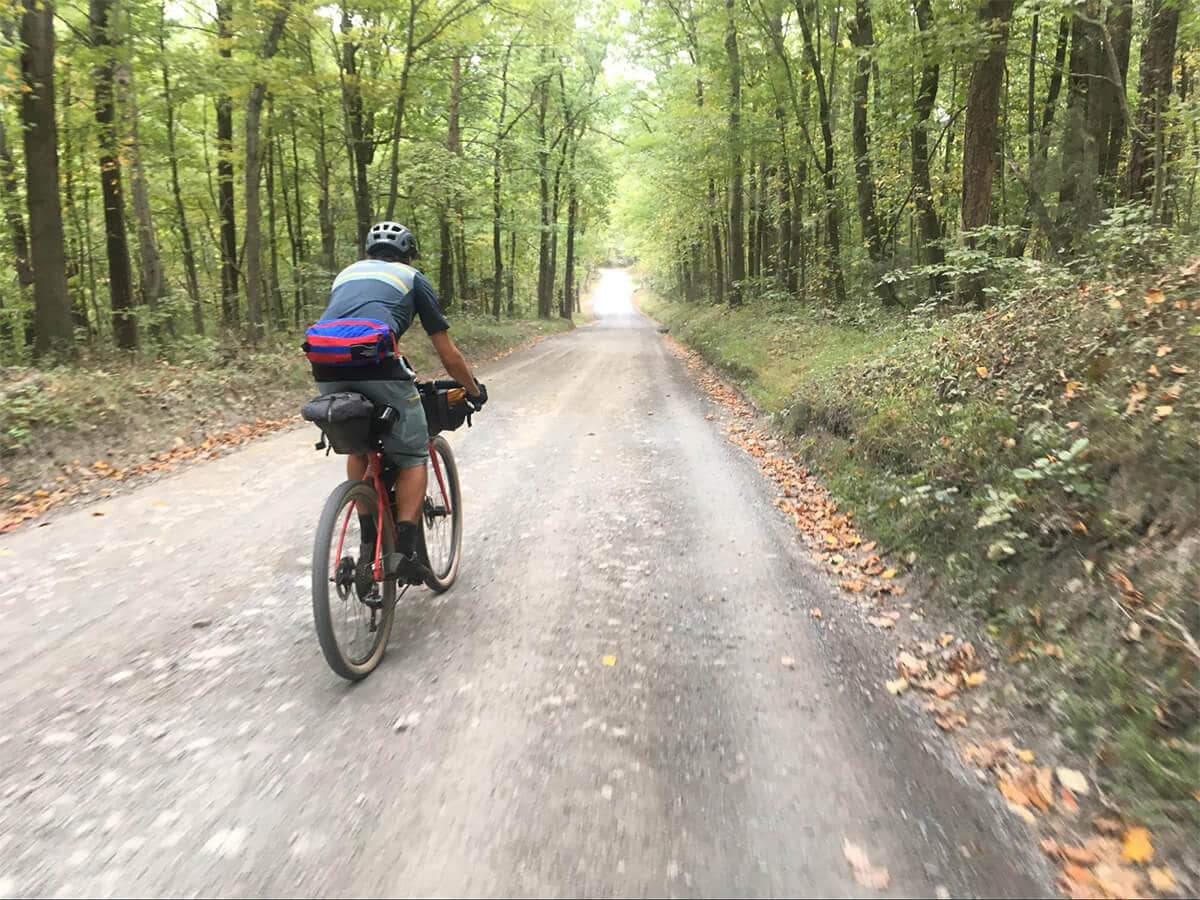 The descent off the mountain was fast and fun. Our weighted bikes were stable and planted, and now that we were used to the handling changes that come with extra gear and weight, the high-speed descent felt super smooth. Almost hitting 50 mph on these bikes was not a problem! As it turns out, Milford Gap was much more rideable than I anticipated and with Barry blazing the way, clearing all the cobwebs ahead, I was happy to follow his line through the chunky rocks. At the top, I had a quick snack before getting ready for a loose, steep, rocky descent into the small town of Seven Fountains. By this point, I had total faith in my bike and just let it do its thing as we rocketed down the slope. Rolling into Seven Fountains, we hit up the only store in town to get some freshly made ham sandwiches, pop, and pickles. They were kind enough to let us fill up our bottles out back and then we were off again, heading back out to do the final gap: Veech Gap. Veech Gap has sections of trail that are not even rideable on a mountain bike, let alone a gravel bike. The start of the “trail” beings with a creek bed made up of big boulders. We hiked what we couldn't ride and rode what we could. Toward the top, the trail continued to get steeper and my legs were feeling the long miles and big climbs from the previous hours. Barry disappeared out of sight and I slugged my way up, arriving at the top to a cheering friend and a well-deserved break. 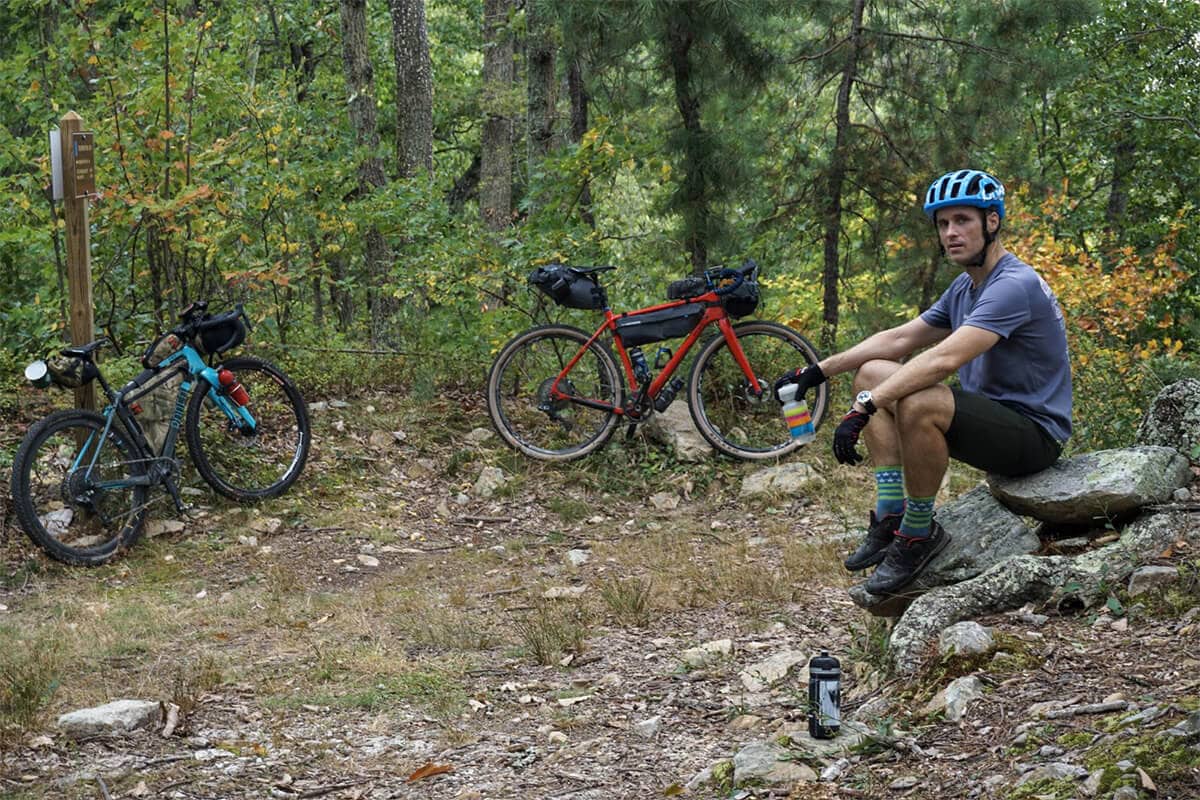 Coming down was a sketchy kind of fun with a few pucker moments thrown in to make us let out a nervous laugh here and there. Once at the bottom, we had a beautiful gravel road to wind left and right and then up and down. We joined up with the final paved road of the trip, which brought us back to our starting point that we'd departed from just 21 hours earlier. 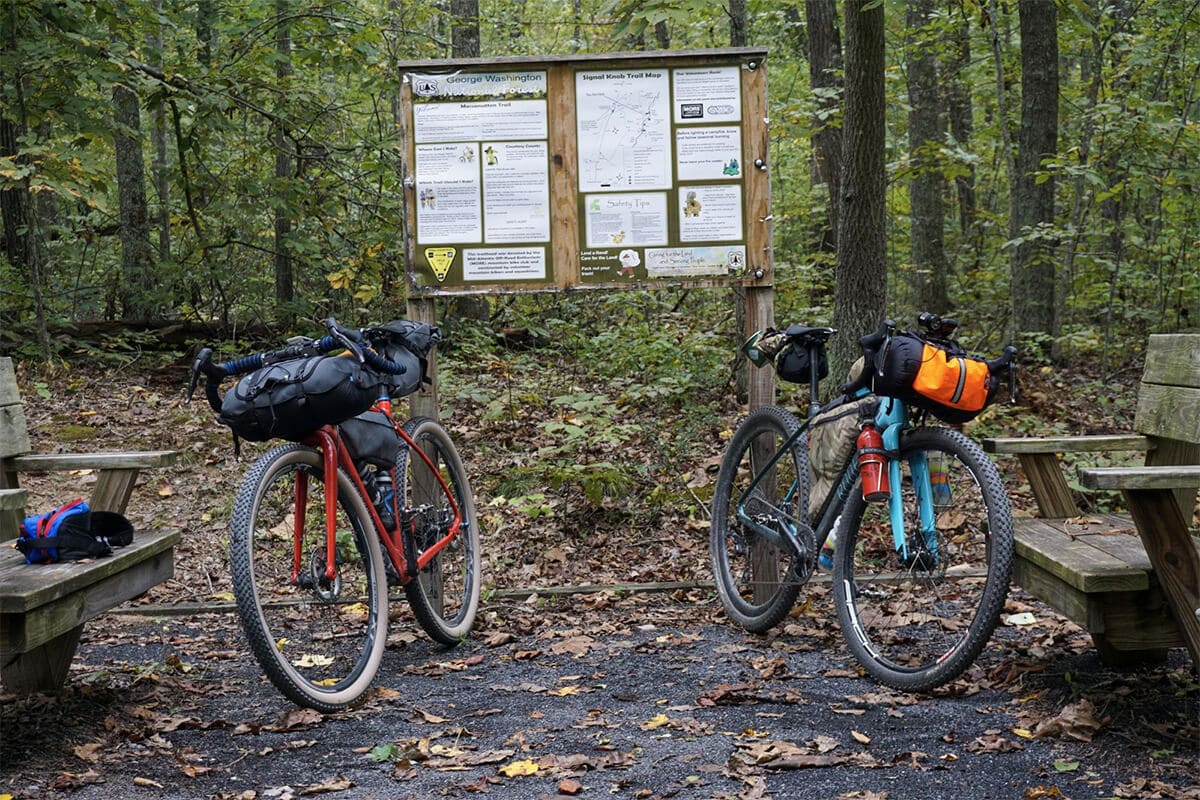 Stepping away from our busy lives and endless commitments felt daunting at first. But this S24O was the perfect way to get out and adventure without investing a ton of time and energy. In the end, the trip didn't feel like that big of a commitment. Still, Barry and I savored every minute of our 2,160-minute escape to the forest.