Join Shimano Triathlete Sarah Piampiano behind the scenes as she shares her experience at the 2019 IRONMAN Western Australia.

Heading into the 2019 IRONMAN World Championships I had one of the most successful lead ins ever.  I went into that race feeling relaxed, confident, healthy and ready to step up and shine on a world stage.  But on race day I was flat.  I had a decent swim (for me) that set me up well to bridge up on the bike.  But once I was out on the roads, my legs never showed up to play.  I ended up riding a power output that was well-lower than I had been riding all season and not good enough to compete at a World Championship event.  I then proceeded to run one of my worst marathon’s ever on the Hawaii Ironman course!  A frustrating day to say the least!

Luckily I tend to have good perspective on race performances.  I know not every race will be your best, and that to race well in Kona you need a little bit of luck to go along with all that preparation.  I was disappointed to not race well on the day (who doesn’t want to race at their best when it counts the most?!?!), but I was mostly disappointed to waste such incredible fitness.

My season race plan hadn’t originally included a December Ironman, but after Kona I quickly decided I wanted to race again.  I was so excited about what I had seen in my training that I wanted to get out there again and see if I could have my best race of the year.  I settled on Ironman Western Australia on December 1st.  I had won my first ever IRONMAN title back in 2015 in Western Australia and also dipped under 9 hours for the first time in 2016, so this race had brought me some great memories.

Even though I do tend to race late into the season, typically by mid-November I am hanging on by a thread.  My body and mind are tired and ready for a break.  My training often wanes between average (at best) to terrible.  This year was the opposite.  Throughout my entire November block I was motivated, my training went very well and I felt excited to get out the door to do the work and to race. 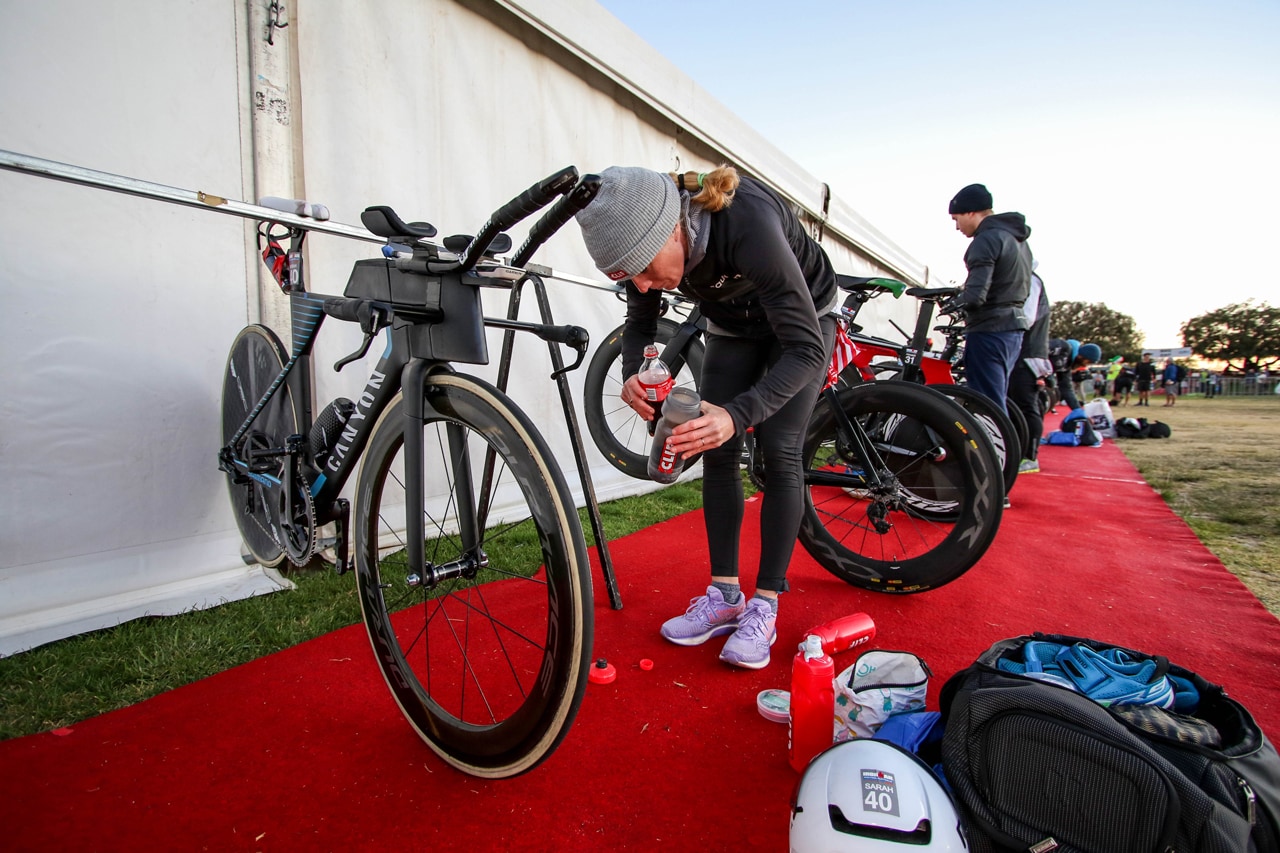 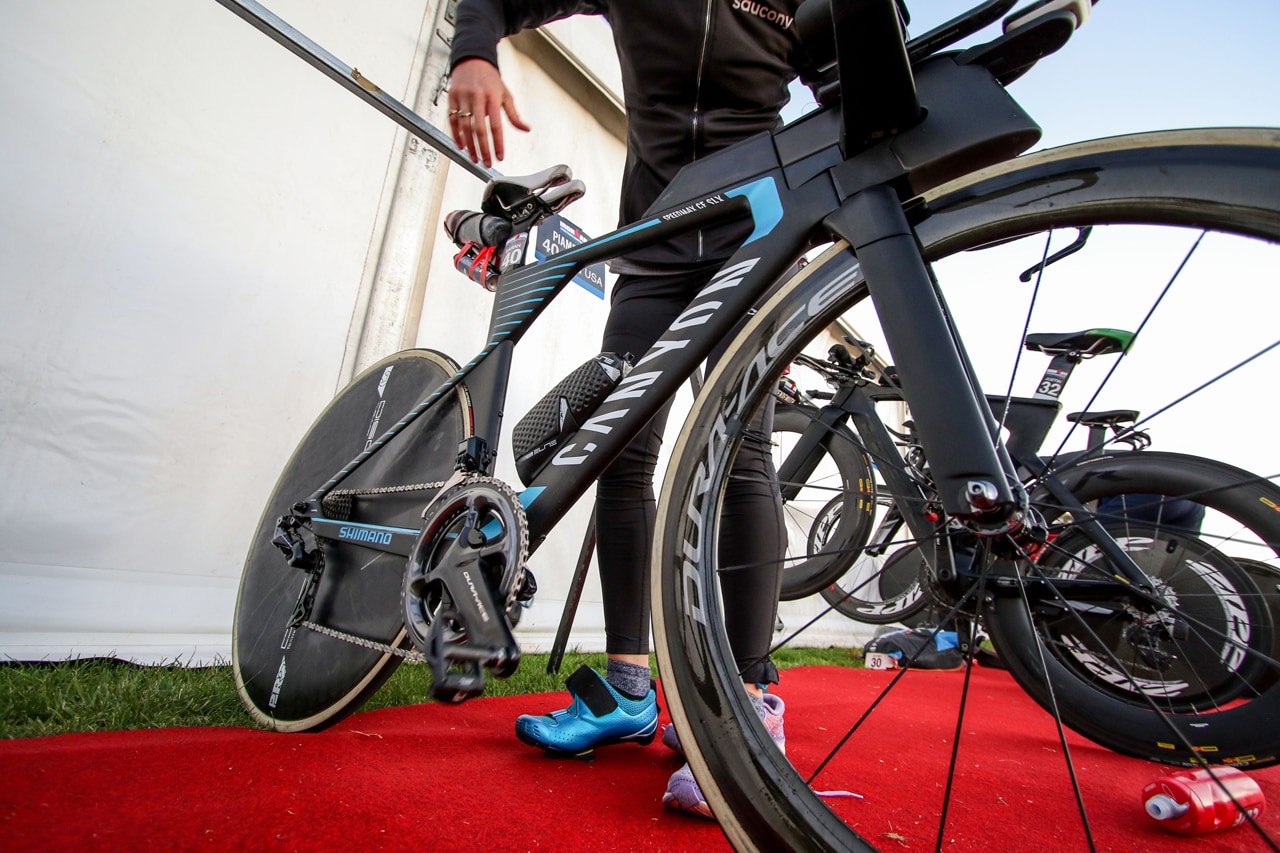 I showed up in Western Australia in as good of shape mentally and physically as I have ever been in December.  I was excited to race!

Western Australia is a flat course (less than 1000 feet/ 300 meters of elevation gain over 112 miles/ 180k), but it is known for its strong winds.  A “calm” day means winds of 18-20 mph/30-35 kph, so you can only imagine what it is like when the winds are ripping!  Often you have a strong headwind in one direction and tailwind in the other for both the bike and run.  The course is challenging in that the lack of terrain variation means very little time out of the aero bars and infrequent cadence changes.  It take a toll on your legs and can really impact the run.  The roads are also chip seal so the added vibration on the bike doesn’t help. 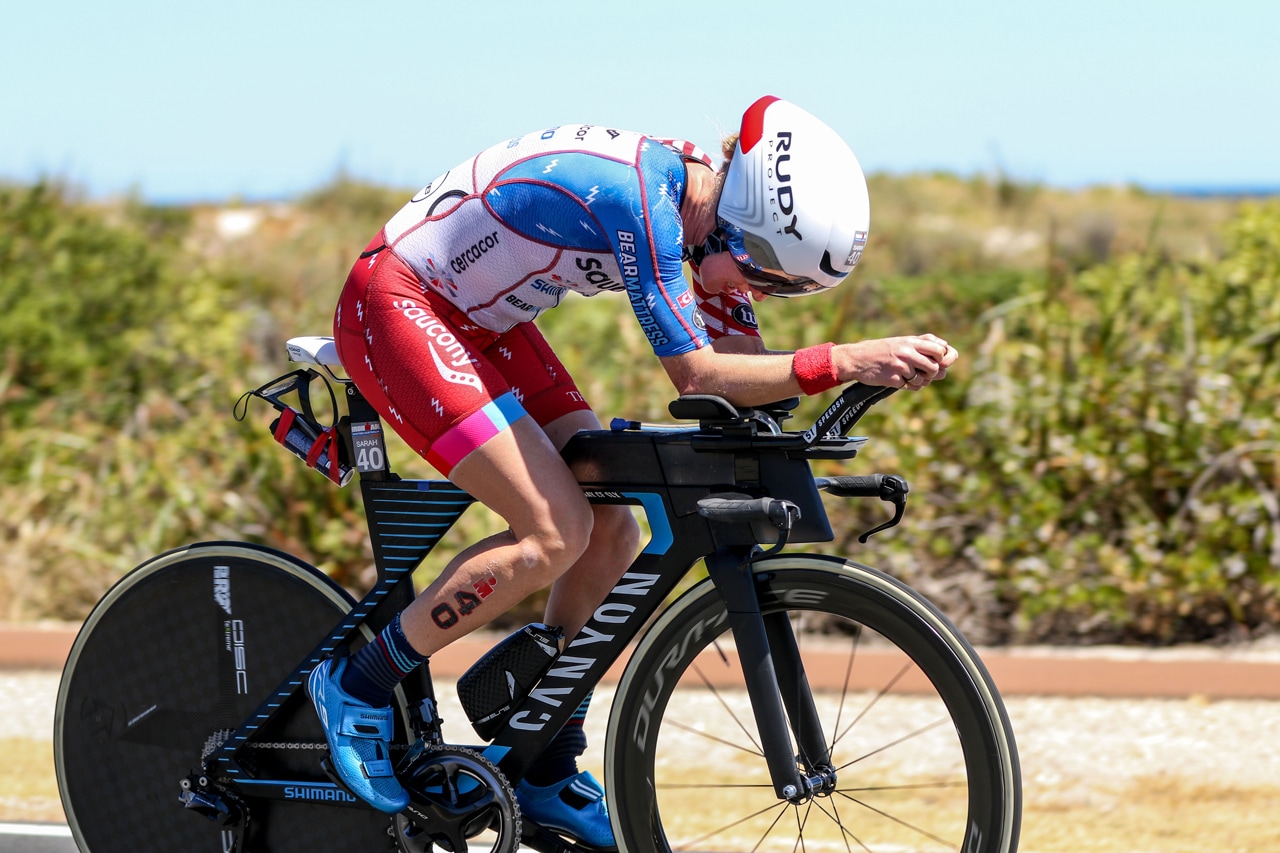 I decided to race with a rear PRO disc wheel and a DURA-ACE C60 front wheel.  I initially questioned whether I wanted to ride a disc in the back because of the road surface, but ultimately decided it would be much faster/ advantageous than riding a C60 rear.  I opted for a DURA-ACE 55/42 front chainring set up and 11-25 cassette in the rear.  In retrospect, I think I could have ridden bigger front gearing, which would have helped push a bit bigger gear when I was riding with the wind, but I don’t think my gearing choice was bad.

I went into the race with some big goals that included riding a power output that was 7-10 Watts higher than I had ridden all year.  I had been training very well and comfortably at these higher output numbers and was confident I’d be able to hit them on race day.  I also hoped to run a sub-2:50 marathon off the bike.  My BIG goal was to break the American Record, which stands at 8:39:18.  All of these goals would require things to come together perfectly, but I felt they were very achievable.  Earlier in the season I had run a 2:53 marathon and finished Ironman Brazil in 8:40 missing the American Record by less than 1 minute, so I knew it was all within reach. 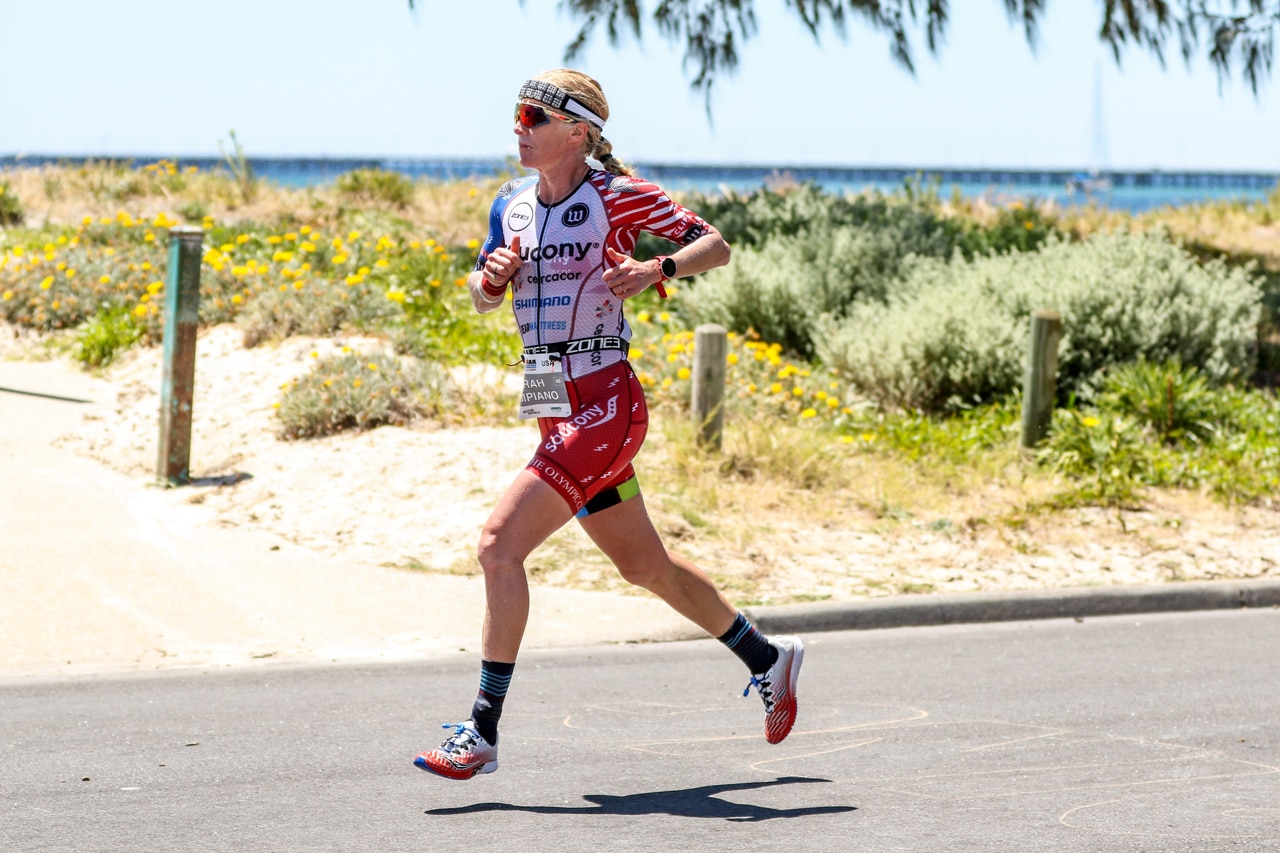 As it turned out, I had a solid day, but I did not reach ANY of my goals.  I had my best ever swim (I swam under 1 hour!), and followed that up with a good bike ride, where I rode the exact same power that I had ridden in my Ironman races all year.  On the run, I started out on track to hit my goal, but faded badly in the back half of the marathon, which also ultimately cost me the American Record.

I finished the day in 2nd place, in 8:42:56 - it was good enough for the 4th fastest Ironman time ever by an American, and was my second fastest Ironman.  I also rode under 4:40 over 180k for the first time ever (which also broke the existing bike course record by 3 minutes, however I was out-biked by two other women).  Although I was 2nd, my time beat the old course record by 7 minutes and was 20 minutes faster than when I won on the same course in 2015.  I walked away happy.  I felt proud of the progress and gains I have made as an athlete over the years, and although I didn’t feel like I stepped up to meet the new goals I had set for myself, I was thrilled by my performance to end the season. As I reflect back on my season, I could not be happier.  After a very challenging 2018 where I spent much of the season feeling tired and burned out, 2019 was a breath of fresh air.  I loved the training I was doing.  My body was finally recovered and training well.  And I was having a blast out on the race course, stepping up at setting new limits for myself that I could have never imagined.  It has motivated me like never before to rest up and reach my new goals in 2020. 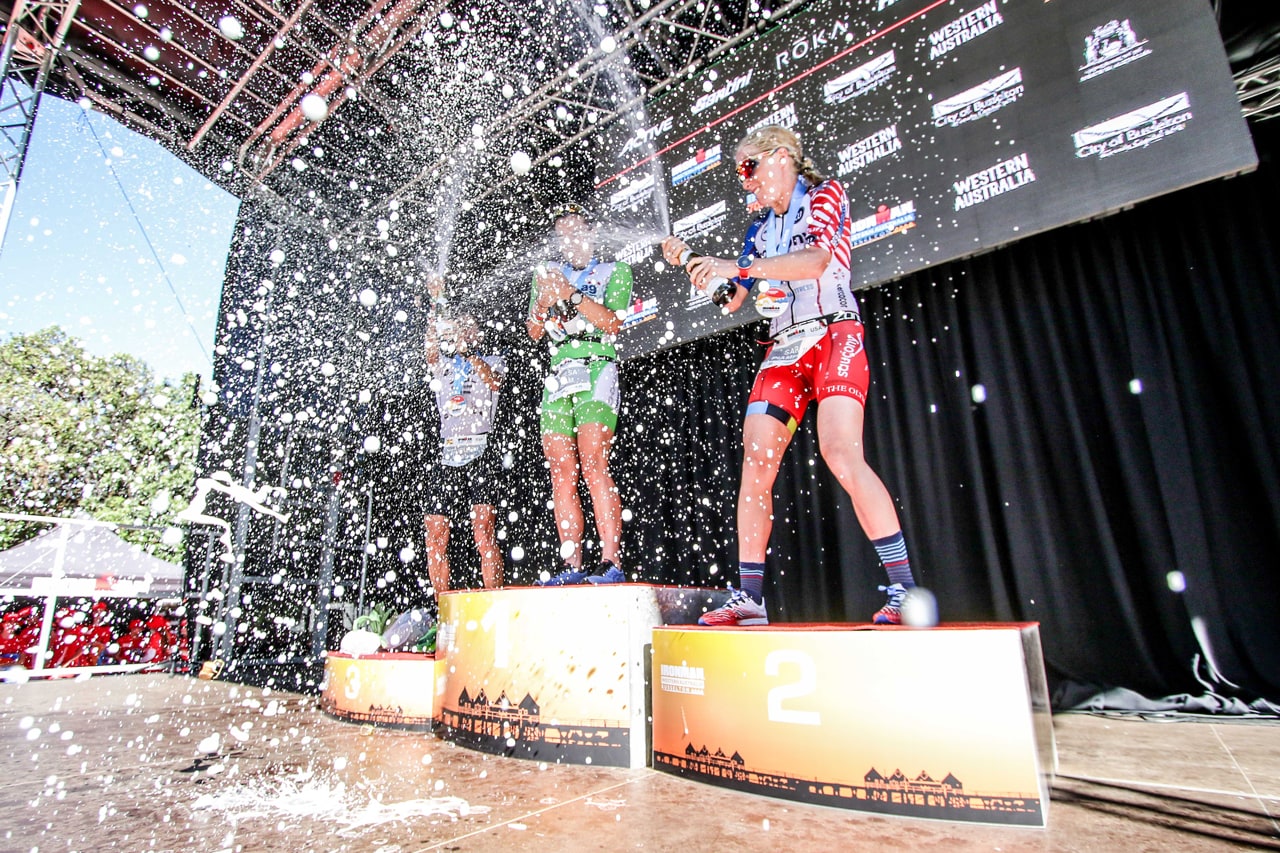