“I really suck at riding bikes,” says David Guettler, owner of River City Bicycles, a shop serving all range of cyclists, from enthusiasts to beginners and kids. “I ride probably more than anyone you know, averaging 14,000 miles for the last five years. But there is still virtually nothing I do well on a bike.” Guettler concedes that he is a skilled cycling commuter – he’s always polite and safe and he selects the best routes. But that’s the extent of his two-wheeled prowess. “I suck at racing – it’s too painful. I suck at mountain biking, even though I started in 1981. I suck at doing tricks. I can't ride a wheelie or do anything interesting. But I don't care, because it's so much fun!”

Born and raised in Detroit, Guettler was introduced to bikes by his “hippie brother. It was pretty easy, because I never had any money for a car, gas, insurance or upkeep anyway.” Initially, Guettler earned a living as a musician, playing in rock & roll bands. “As stable as that does sound, I figured I would hedge my bets and diversify by branching out into an even less stable industry,” he says.

Now, he’s fully hooked on the business of bicycles. “I love the products, people, customers and lifestyle. Any rich schmuck can have a pile of money; I have that along with a cool bike shop!” All humor aside, Guettler is deeply appreciative of the opportunity that cycling affords his life. “Bikes are the fountain of youth,” he says. “We are very lucky to be doing what we do. How many people truly love their jobs?”

Of course, being profitable as an IBD owner is just as important as being passionate. “Generate profits, first and foremost,” says Guettler. “Those are the first two words of our mission statement. It is our mission to stay in business.” Armed with that mantra, Guettler views his shop through a bigger picture lens. “We attempt to compete on the grand scale of the retail market, not just in the bike industry,” he says.

He also sees the importance of supporting the local cycling community, sponsoring the Bicycle Transportation Alliance (BTA) and several other Portland bike organizations. The shop has sponsored numerous clubs and teams over the years, but Guettler is currently testing a different strategic tact, directing River City’s promotional dollars towards “the 60% of the population who may not already be inclined to go into a bike shop.” 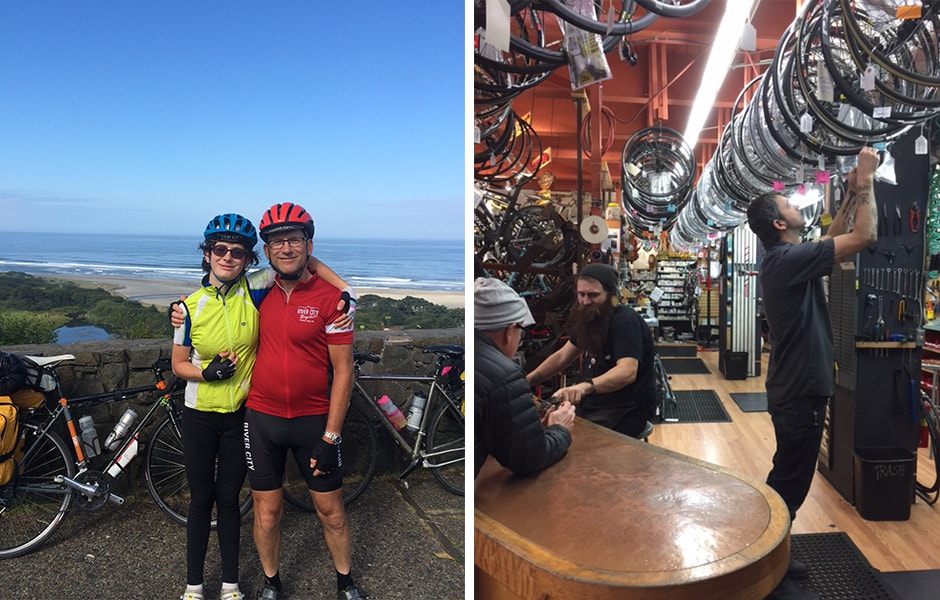 While the goal of profitability fuels Guettler’s business savvy, the rewards of a career and lifestyle devoted to bikes run the gamut from personal to professional. One particularly poignant bicycling highlight for Guettler was teaching his autistic daughter to become a cyclist, culminating with the pair completing a three-week bike tour of Italy last summer.

Other epic accomplishments for Guettler include a Morgan Hill, California to Las Vegas, Nevada tour with Specialized Bicycles – a five-day, 650-mile ride through Yosemite and Death Valley – and the Taiwan KOM Hill Climb Challenge – a 55-mile race from sea level to 11,000 ft. And then there was his brush with cycling royalty. “The highlight of my career was being named the top retailer in 2010 and having Eddy Merckx present the trophy,” says Guettler. “It is hard to be humble when Eddy has toasted you!”