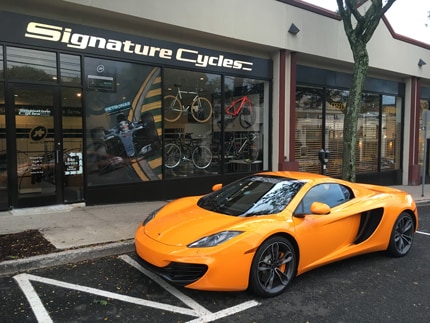 Paul Levine has a long-time love for bikes, but he’s thankful for the opportunity to ride now, more than ever.

“I had a rare cycling condition—external iliac artery occlusion—develop four years ago,” says Levine. “The operation went sideways and it almost turned for the worst. I appreciate being able to ride much more than before the operation.”

Riding a bike, says Levine, is an equalizer. “It doesn't matter your lot in life, financially, socially, or educationally. Every cyclist can enjoy riding at their own level and discover how cycling can bring rewards that money can't buy.”

With that philosophy in mind, Levine left his career as a retail consultant in the fuel and food service industries and set out to create Signature Cycles, which is now the nation’s largest custom bicycle studio. The Signature Cycles’ mission is simple: to help people who love to ride have more fun.

“I started our studio model in 1999 as a cycling enthusiast who wanted to create a business where expertise, professionalism and exceptional cycling support were available to all levels of cyclists. A business where no secret handshake or race credentials were needed to get unconditional advice on what was best for you, as a cyclist, rather than what was best for the shop,” says Levine. “From the first day, I decided to build a studio that would appeal to me, if I were the customer. The result was a professional alternative to the typical bike shop experience.” While the Greenwich, Connecticut-based retailer targets “anyone who enjoys riding a bicycle and having fun,” the business also has a powerful reach further afield and among those less fortunate, through support of global non-profit World Bicycle Relief.

“We have raised over $300,000 in the past four years and are committed to expanding our involvement with WBR by sponsoring trips to Africa, where the real work is done changing the world with the power of the bicycle,” says Levine.

Indeed, Levine’s compassion is unquestionable, and his passion is pure. He cites “watching our clients feel like eight-year-olds, riding their bikes and exploring the world,” as the most rewarding aspect of his work.

And he’s certainly had his own share of memorable cycling adventures. One of the best?

“Riding the Pan Mass Challenge (PMC) with Lance Armstrong, as his domestique—like I had a choice,” says Levine. “We clicked off 112 miles in just over five hours and I taught him how to play ‘drop and hide.’”

One of the most challenging?

“I rode with a small group across the Pyrenees in five days. Started in Biarritz and finished in Cerbere,” he says.

And as for the most embarrassing?

“The second day of our Signature Cycles 2016 Majorca trip, I got cocky and took a downhill switchback too fast, causing my front wheel to wash out, body-slamming me onto the pavement,” Levine recalls. “I broke a collarbone and four ribs. I was a guide for the trip. I instantly become a liability, rather than an asset.”