The Gulf Islands. An archipelago of steep-sided, droplet islands – furry with forest, salal, and mossy rock slabs – spread across the strait that separates the coast of British Columbia and Vancouver Island. They each have their flavor (mostly organic), their character (eccentric), their hidden spots and secret coves, overlooked from the recreating masses by a mess of serpentine roads, slow moving ferries, and tricky logistics.

Salt Spring Island is the quintessential Gulf Island and has long been a home of eccentrics, artists and recluses. A rural redneck vibe intersects with an air of affluent retreat. It’s a perfect place to explore by bike or get lost, two perfect objectives for our small crew to tackle on one of the last weekends of summer. Get up before dawn. Wrap a wind shell around your shoulders, and take turns stuffing your bar bag with snacks, your mouth with toast. Lock the front door and coast to the meeting point, just as morning starts to spread. It’s a thirty kilometer pedal along a converted rail-trail to the ferries. We make sure to stop for a coffee (maybe two) before making the first ferry over to the island. 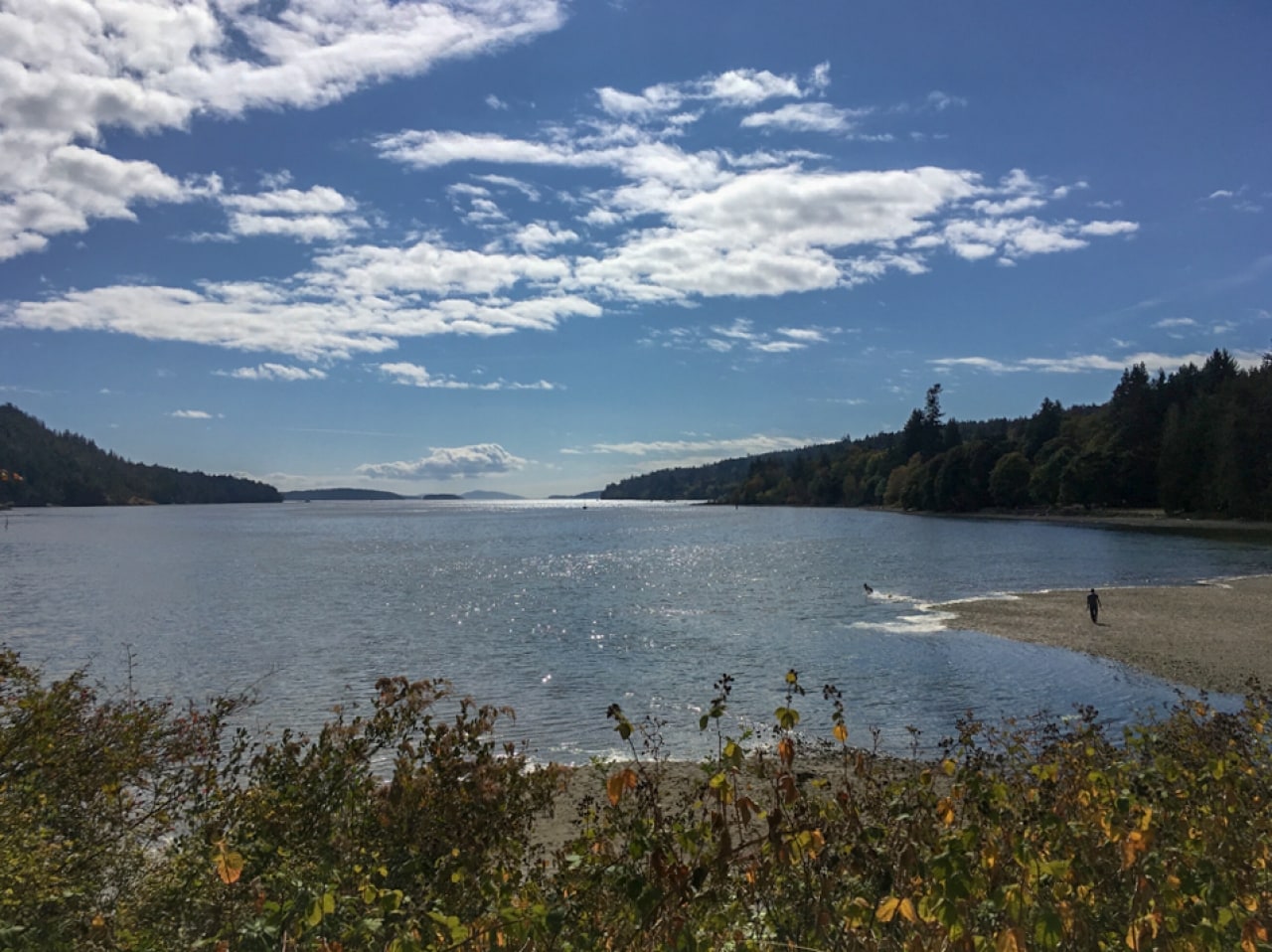 Waiting on the far side is our friend Dylan. A Gulf Island eccentric if there ever was one, Dylan is impish and enthusiastic, shepherding our small crew from the tiny Salt Spring ferry terminal up the first of what will be many climbs. A locals’ tour includes all the swim spots– lakes set in a col between punchy peaks, surrounded by fir forests and hulking red cedar menhirs. First, it’s Musgrave, a three hundred meter climb on rutted washboard. Dip through some doubletrack then Dylan’s routing has us carving down freshly poured pavement, slicing switchbacks with a view of the surrounding islands lost to watering eyes and grinning mouths. 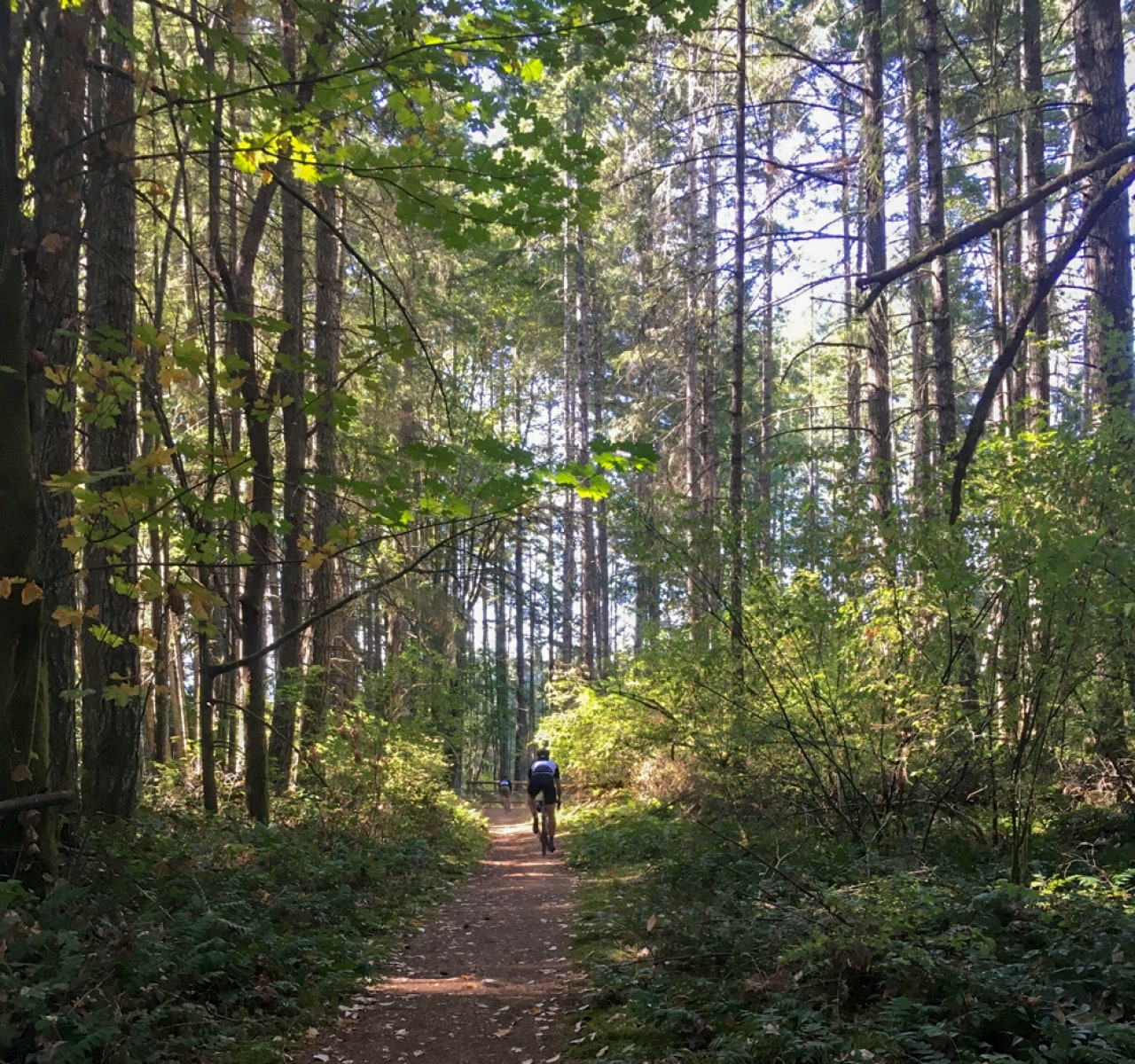 The next climb (this ride is death by 1000 cuts/ 10,000 feet) skirts across Mount Maxwell, mixing hard packed dirt with busted pavement. Drop into the town of Ganges and make sure to hit the pump track and hit the pizza place. Then it’s back onto singletrack without too much messing around except for a glass of elixir from Moonshine Mamma’s airstream. Dylan’s next ribbon of roots and fresh loam is a little walking path–the Dunbabin trail– wrapping up and down the sides of a ravine that is shaded in salal bushes & cedar and peppered with tricky bridge crossings, ferry shrines, and friendly dog walkers. We come crashing to a standstill at the terminus, laughing, coughing, picking moss out of our shifters, and thrilled with the flow. Pick your piece of the island, and you’ll end up with amazing gravel. Calling it gravel, though is a disservice. An honest assessment of the surfaces on Salt Spring accounts for the chunky pavement and buttery tarmac. The dirt is a mix of hard packed ochre and rich, coffee-ground loam. You’ll bounce around baby-heads of granite, and cruise on graded gravel. It’s a wonderful mix of singletrack smashing, gravel roads and perfect pavement, much like the eclecticism of humans living here. Don’t change Salt Spring, let Salt Spring change you. And a couple of tubes, probably. With what feels like the last day of summer slowly fading, our group makes its way back to the ferry. Dirt tans cling to shins, and our guts feel queasy from the candy, CLIF bars and hundreds of kilometers/ thousands of meters ridden. But the last climb has been conquered and the sun is setting on the Georgia Strait. These kind of all-day affairs, characterized by a mixture of discomfort, discovery and elation act as eulogium to the disappearing summer. Come back next year, please. Bring your bike, and a few friends.