If you search for ‘1st’ on Tracy Moseley’s website you’ll come up with 87 entries. That makes her a bonafide mountain bike legend in our book. We sat down with the three-time Enduro World Champion and two-time DH World Cup winner to talk about her two decades of bike racing. Below the first chapter of three in total about Tracy making her way in the early days of DH racing.

It was all thanks to my older brother Ed that I got started. We grew up on farm in the Malvern Hills on the border between England and Wales and as the mountain biking boom kicked off in the UK my brother started riding with the lads in the village. I tagged along as his little sister and quickly realised it was the downhill bits I enjoyed for the fun and adrenaline of following him and his mates. Tracy Moseley on her first BMX bike when she was 5 years old.

Before I knew about North Shore or any proper skills training we were putting bricks and bits of wood up in the garden to create ramps for jumps. We were just being kids playing outside with no direction or plan, it was just something to do, but it enabled me to build a solid skills base. People can miss that these days. If they get pushed into racing too early it becomes very serious, whereas for us it was all about fun, at least until those early races…

I started racing in 1993 when I was around 15 in the early days of Downhill in the UK. In fact I started doing a few dual slaloms. One summer I went to the Malvern Hills Classic, which was right on my doorstep and won the slalom competing against the best female bike riders in the country. Everyone was like ‘Who are you, where are you from?’ It wasn’t until the following year, at the same event, when the same thing happened again, that I thought I’d give racing a proper go. My brother reminded me recently that we were making these little slalom tracks and I was posting as quick a time as my brother and his mates. They were like ‘What? Your little sister. She shouldn’t be able to do that!’

IT WASN’T ALL PLAIN SAILING, THERE WERE PLENTY OF MISTAKES ALONG THE WAY...

In my first year of racing I went to a race in Dorset on the south coast of England and it was the first time I really knocked myself out. I crashed and I didn’t have a full face helmet. I just remember waking up a good 100m further down the track. I could see the course up on this hillside and I was a bit stunned, thinking ‘how did this happen?’. Those first few crashes I started to think, ‘this is actually dangerous’. Those early days of not having the right equipment and realising that when it goes wrong it hurts were hard.

Riding with local club there weren’t any girls, which I think always pushed my level up. I’ve never felt concerned with what it’s like to be a women in the world of mountain biking, which is pretty much male dominated. I think because I grew up with that being the norm, I feel like I’ve just become one of the mountain bikers and I feel like that’s been a big advantage to never feel out of place or outnumbered. I just got on with it. That’s been a big advantage in many ways. It wasn’t about trying to win the women’s race it was about going out and being as good as I could be, and if my brother was doing it I wanted to try and do it as well.

Initially success was what drew me to racing. I did well, easily. But those things changed and it’s now the passion for cycling that’s enabled me to be still loving it now. It felt like something that was fun and naturally I could turn my hand to. 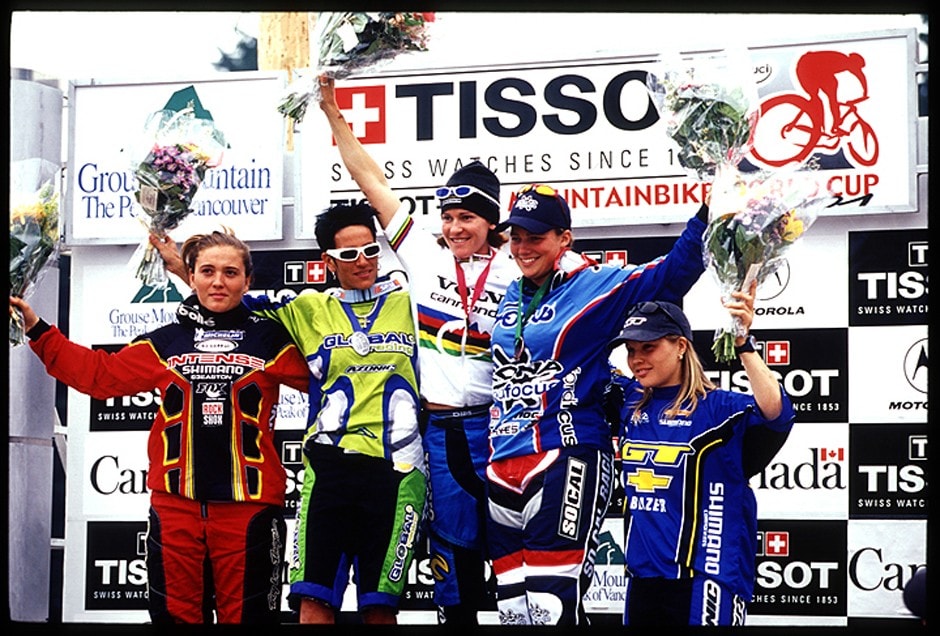 One of my biggest set-backs in racing was when I was a Junior and I went to the World Champs in 1997. During my race I was trying to overtake a girl I’d caught. I was just too impatient. Rather than waiting and sitting on her wheel I tried to pass. I got tangled with her, crashed, buckled my front wheel and limped to the line, but still managed to finish 2nd. It was one of the driving forces for me wanting to become a Senior World Champion. I remember thinking ‘you should have won the worlds as a junior and didn’t’ and it took another 13 years before I got to win it (which happened in 2010).

But those mistakes taught me that things don’t always go your way. It’s part of life and competition that you have to have the ups and downs along the way to make those successes more meaningful in the end.

In terms of inspirations the UK it was definitely Helen Mortimer. In the late 90s she was the first British girl to get on the podium at WC DH race. Karen Van Meerbeeck was another name. They were the girls I looked up to and was trying to emulate. So to go to my first World Cups and compete on the same level as those girls was pretty cool. 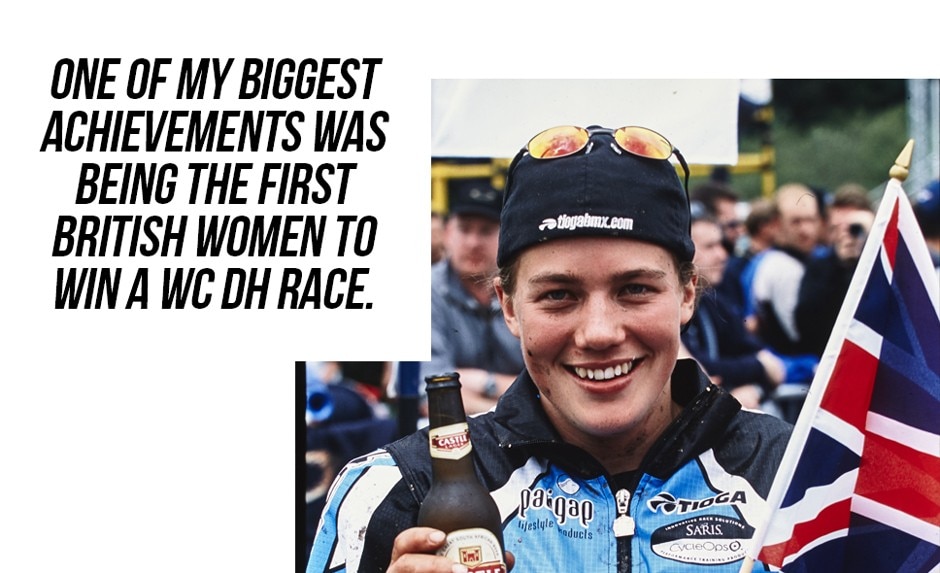 One of my biggest achievements was being the first British women to win a WC DH race. It was a cool piece of history that will always have my name attached to it. That was in 2002 at the first ever WC we had in Fort William. The history of what’s gone down at Fort William and what an iconic venue it’s become for the sport. So to be there at that first one. Looking back in terms of equipment clothing and what the course looked like it’s nothing like it is now. It’s a really cool memory.