Trans-Cascadia is back! Trans-Cascadia racers will arrive at their first basecamp in the depths of the Gifford Pinchot National Forest tomorrow. For the first time, the 4-day blind-format enduro race will take place in Washington state, utilizing 45 miles of reclaimed trails that are the direct result of years of planning and thousands of hours of labor. 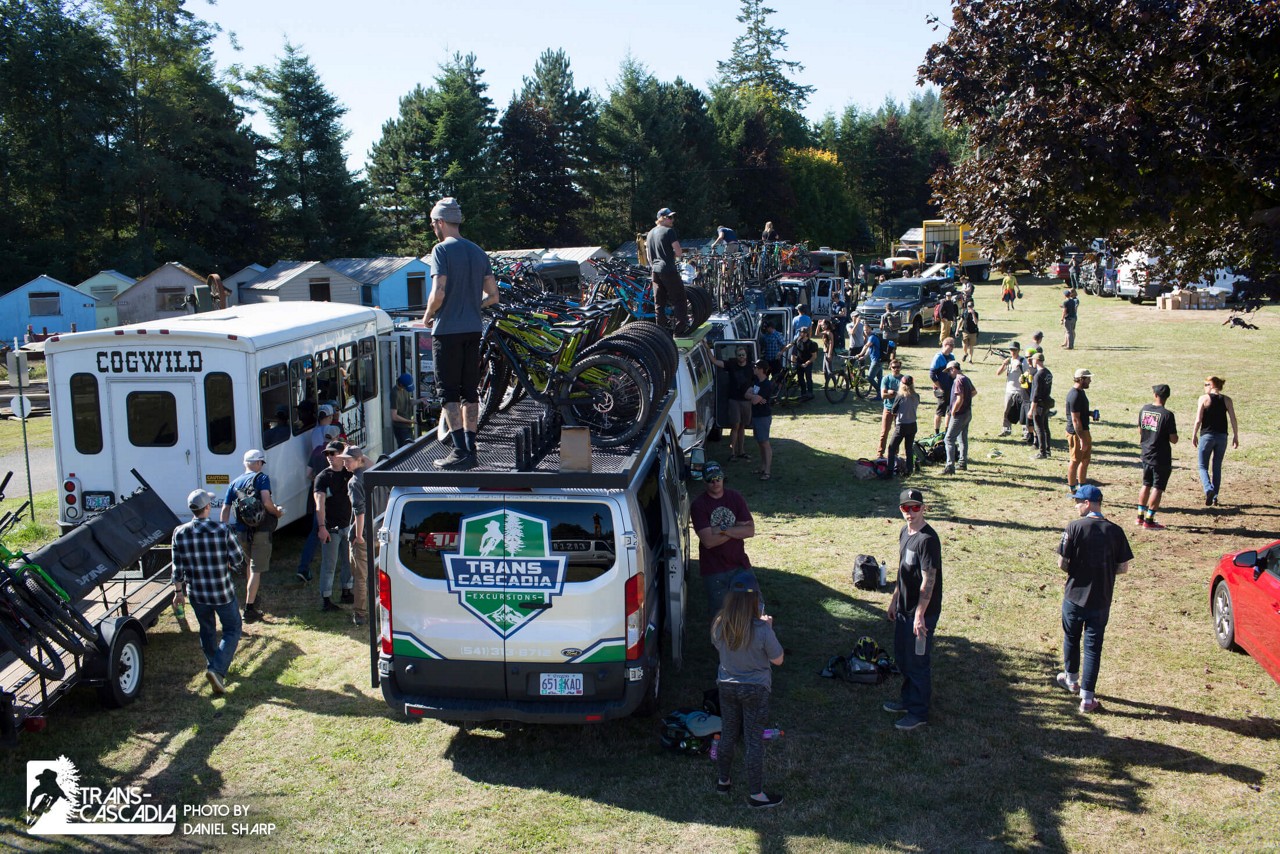 Day 1 is a loop with no shuttle access. There are also no options to access the trails with resources and therefore, racers are required to carry a water filter and enough food to sustain themselves for what was expected to be on average an 8-hour ride.

Geoff Kabush would take the lead after Day 1 with Peter Ostroski and Francois Bailly-Maitre in second and third place. Geoff has competed in each edition of Trans-Cascadia and has won the overall pro men’s category for the last two years. “The best part is exploring new trails. It was super fun riding around Oakridge the last few years because I’ve never really ridden in that area much before the race. And I really enjoy riding the trails blind so it’s cool to come here and explore everything that’s 100% new.”

In the Women’s category, Emily Slaco – who is experiencing Trans-Cascadia for the first time – took the top step, with Kim Hardin and Bekah Rottenberg in second and third place. “I don’t think I had any expectations coming into the race,” says Emily. “Stage 1 was good for shaking out the cobwebs and figuring out what the trails and dirt are like. It was super fun and it was nice to have the neutral in the middle as well. I’ve never had a race with a neutral section before – it was awesome! Stage 4 was so fast and straight down. We had a break at the top of the stage and the views on the ridge were stunning. Hanging out with everyone was fun – the crew made it fun, it was a good time.”

Overall, racers agreed the effort of the day was worth the rewards. “I had no clue what to expect,” says Luca Shaw, “but it was awesome. Definitely the longest ride I’ve done just on trails. We were on trails for five hours plus – that was cool. Such amazing views and the tracks were so much fun. It’s cool to ride this kind of terrain. It’s pretty much untouched and a rare opportunity – just had an awesome day on the bike! I loved it.” 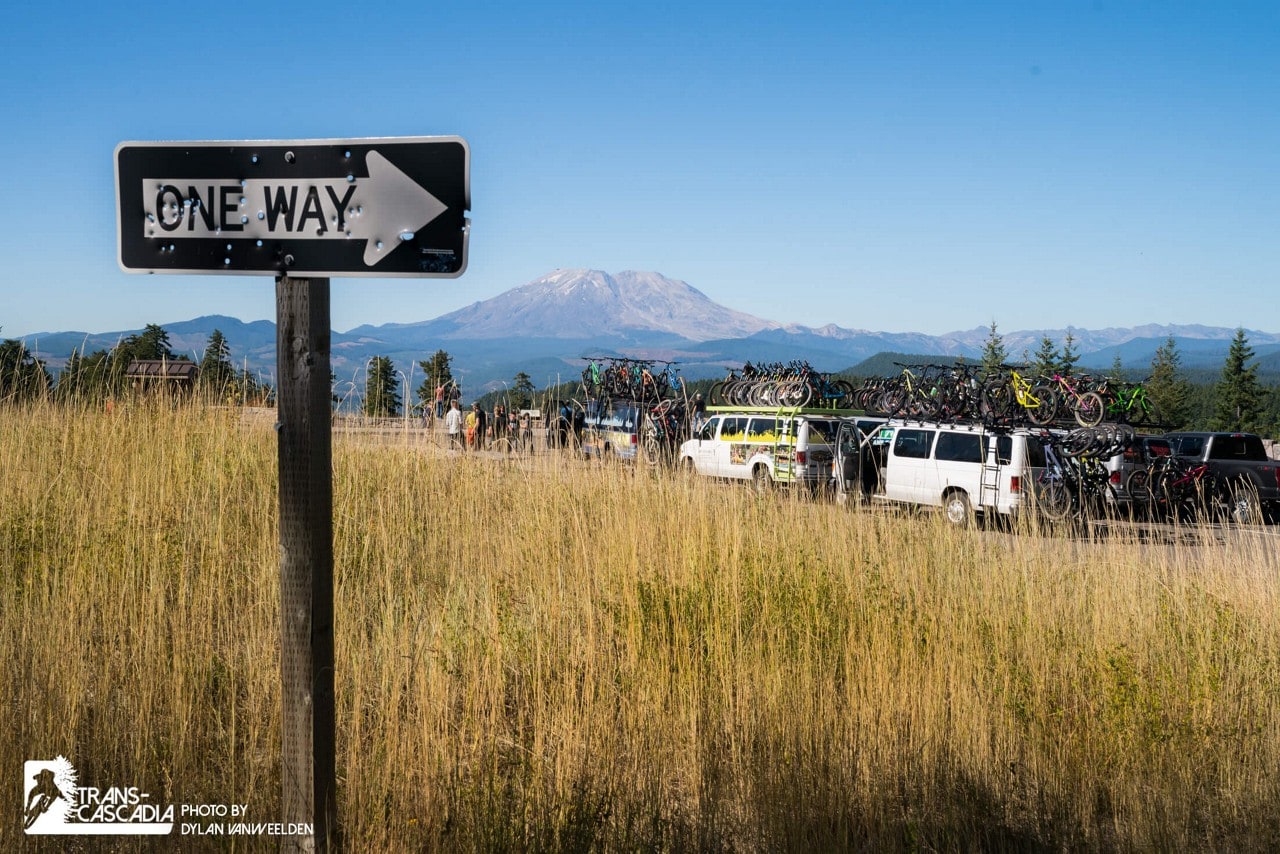 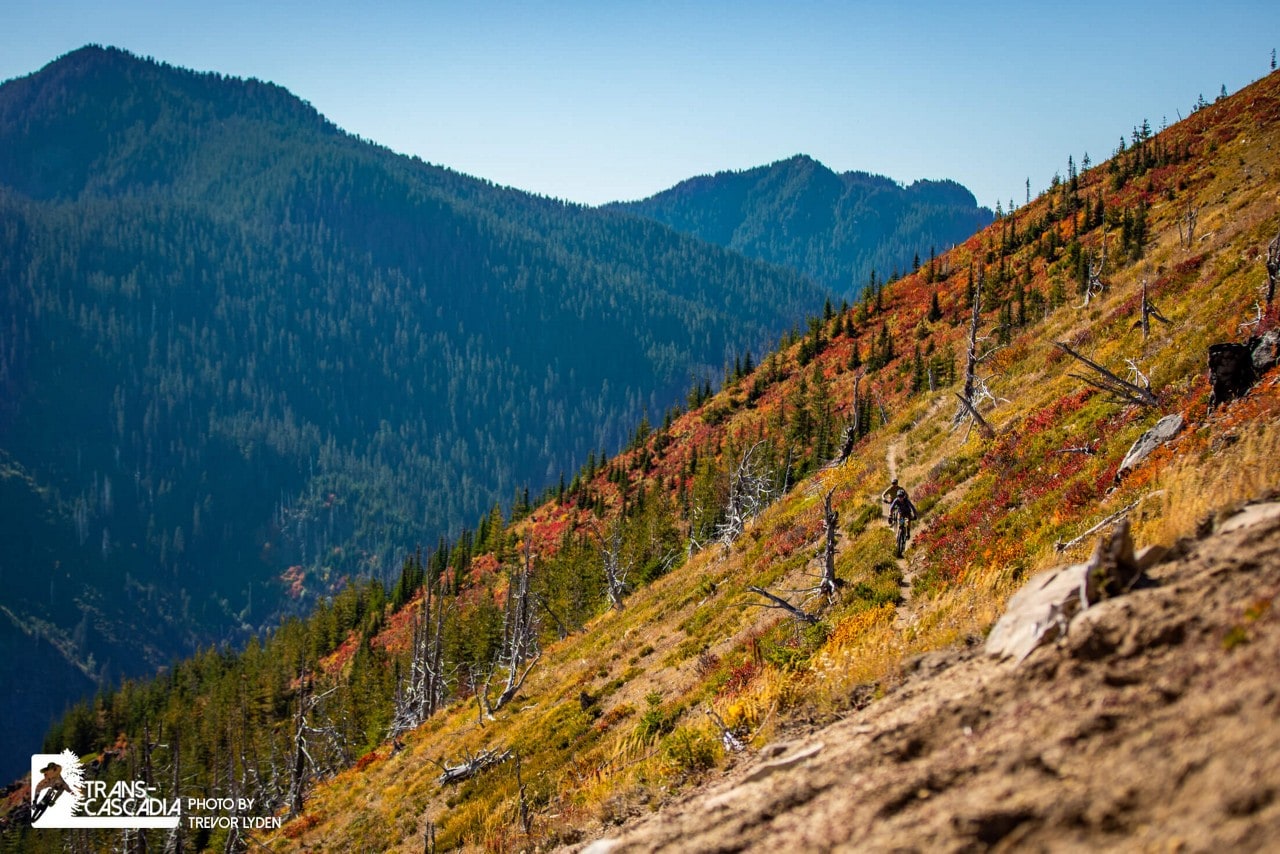 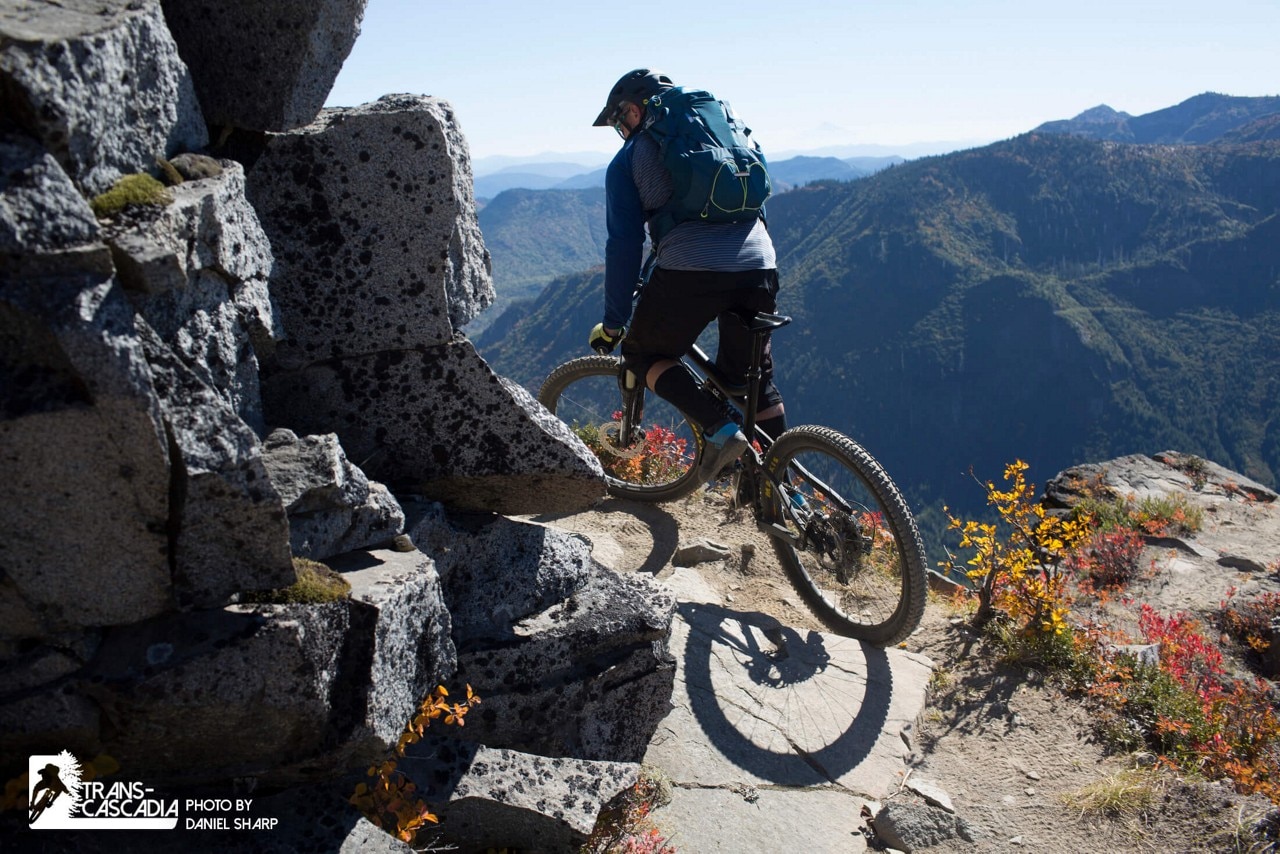 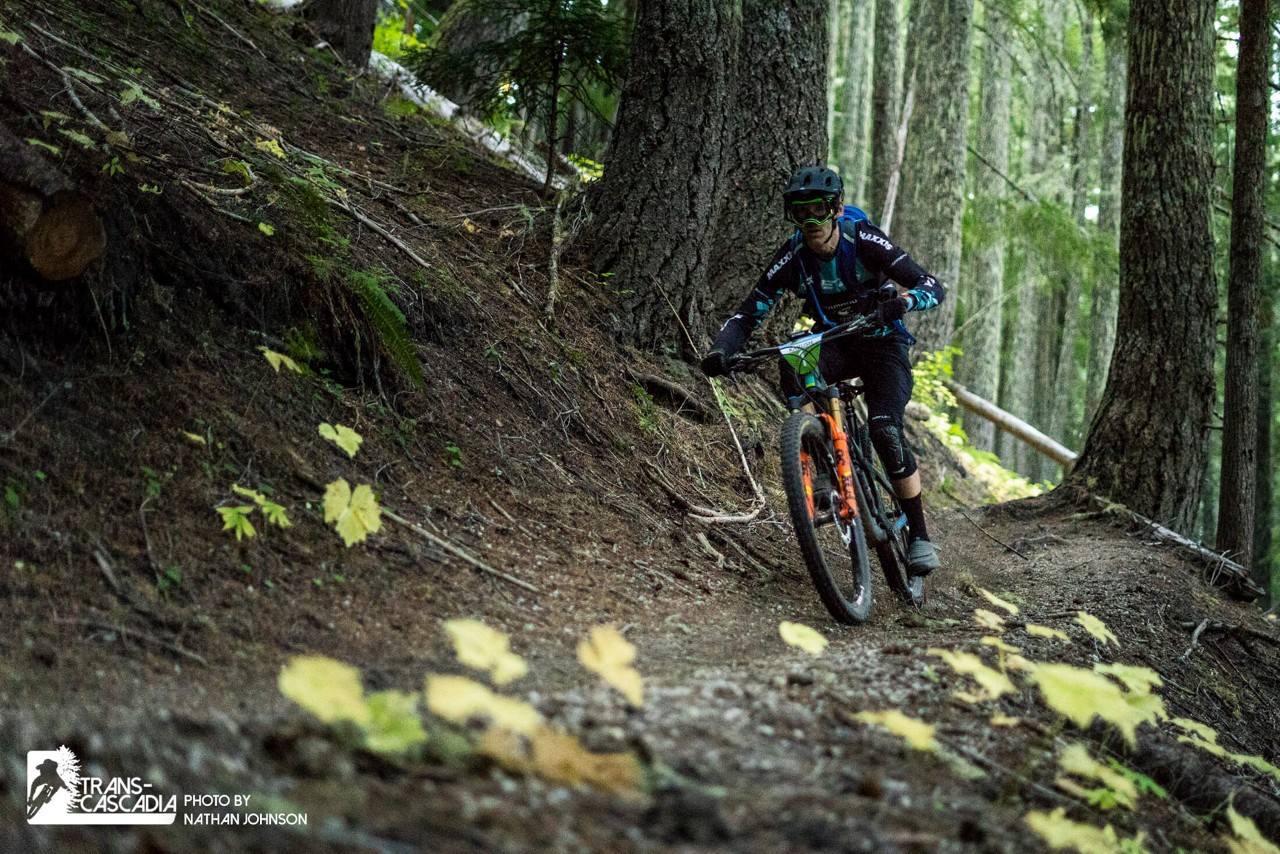 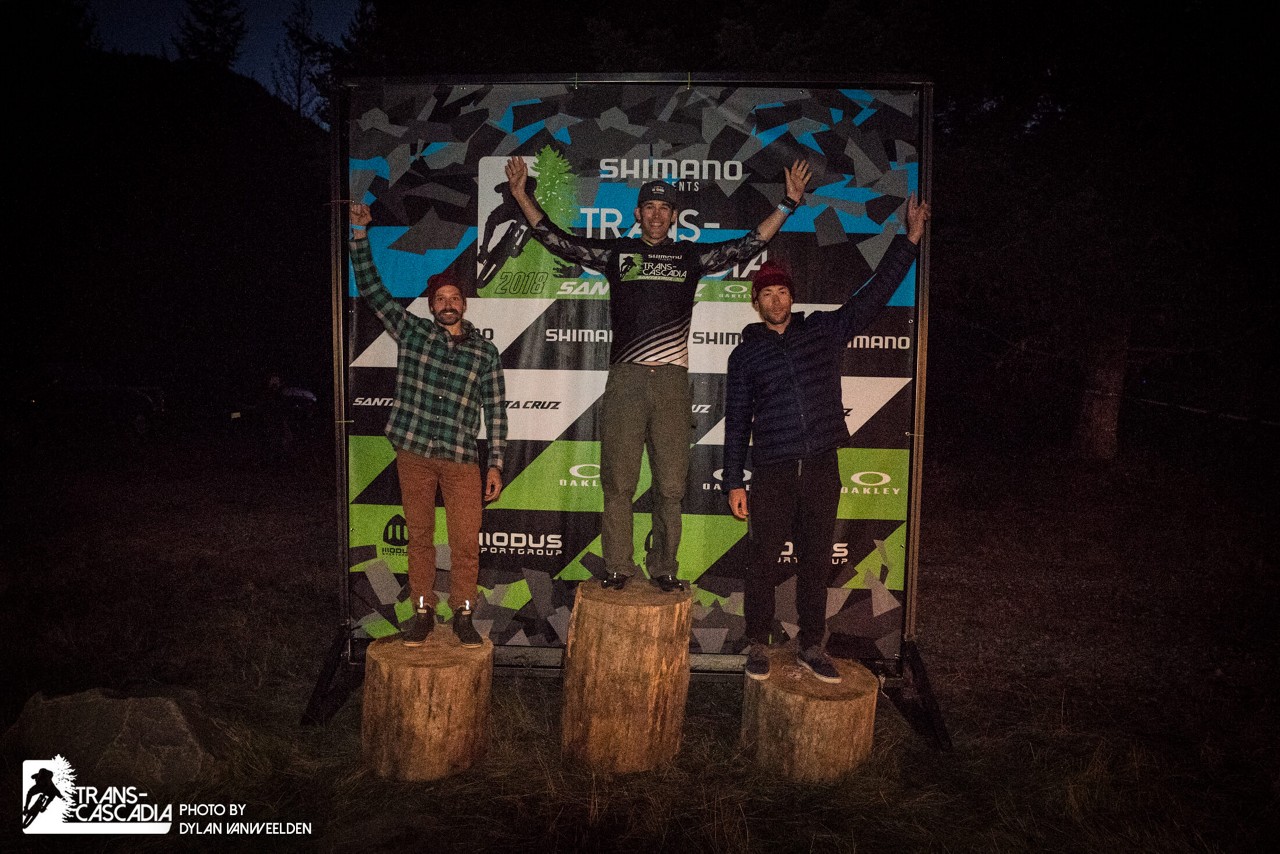 “Because Day 1 was such a hard day of climbing, today is payback,” welcome news from Nick Gibson, Race Director. “We’ve got three big shuttles and your stats are 8,000 feet of descending with 2,000 feet of climbing.” What was best described as an active recovery day saw racers shuttled to the top of the ridgeline east of camp three times to enjoy a wide variety of terrain – including what became known the ‘spiritual experience’ of Stage 6.

The Pro Men’s category is tight with four racers within 14 seconds of each other. Francois Bailly-Maitre and Peter Ostroski took second and third place after Day 2 and the returning champion, Geoff Kabush, is in fourth. “I’m still in the mix, there’s just been a lot of fast stages so there’s not much time in it still. There was some nervous high-speed stuff out there today. Stage 6 and parts of Stage 7 were actually so high speed it was fun to have some corners to really rip. They had lots of open – you could see and read the trail, and it was just about how fast you wanted to go.” 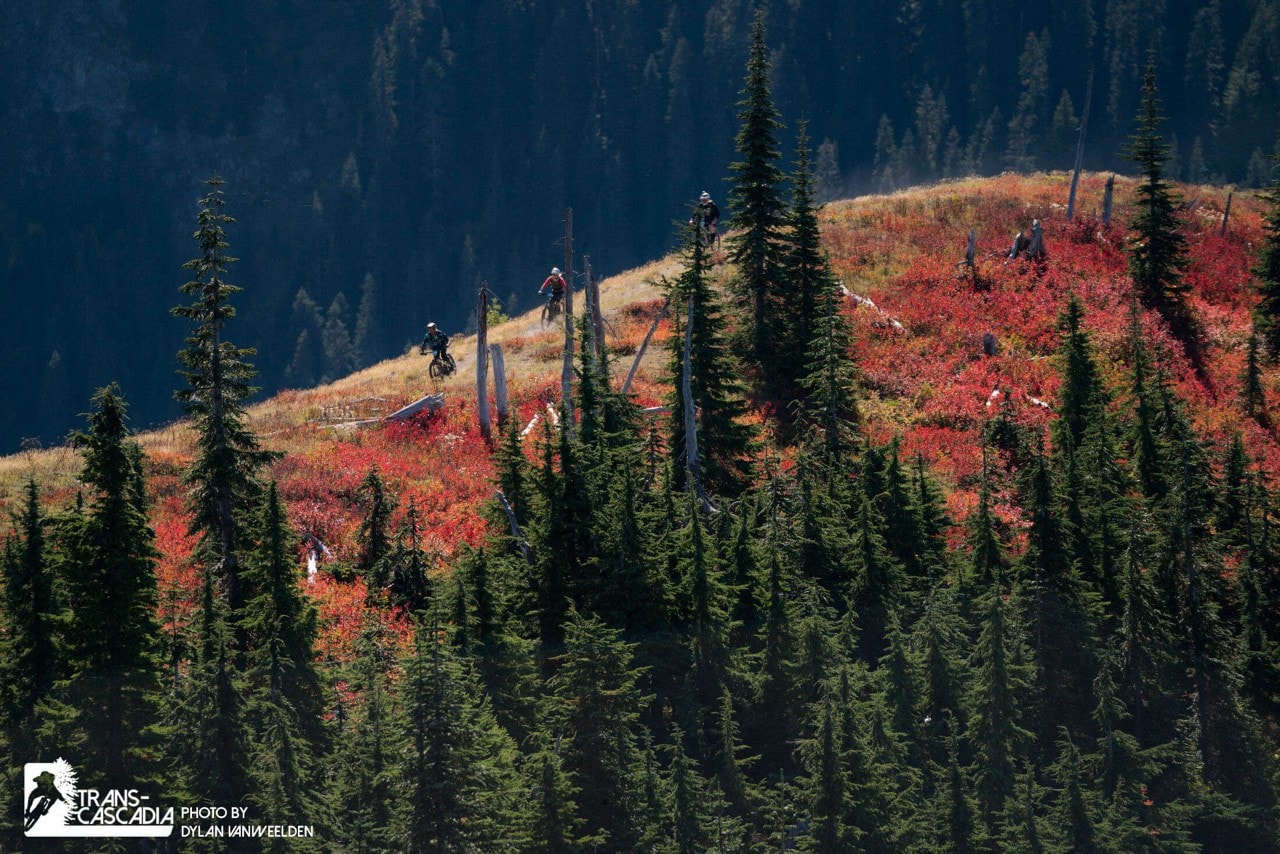 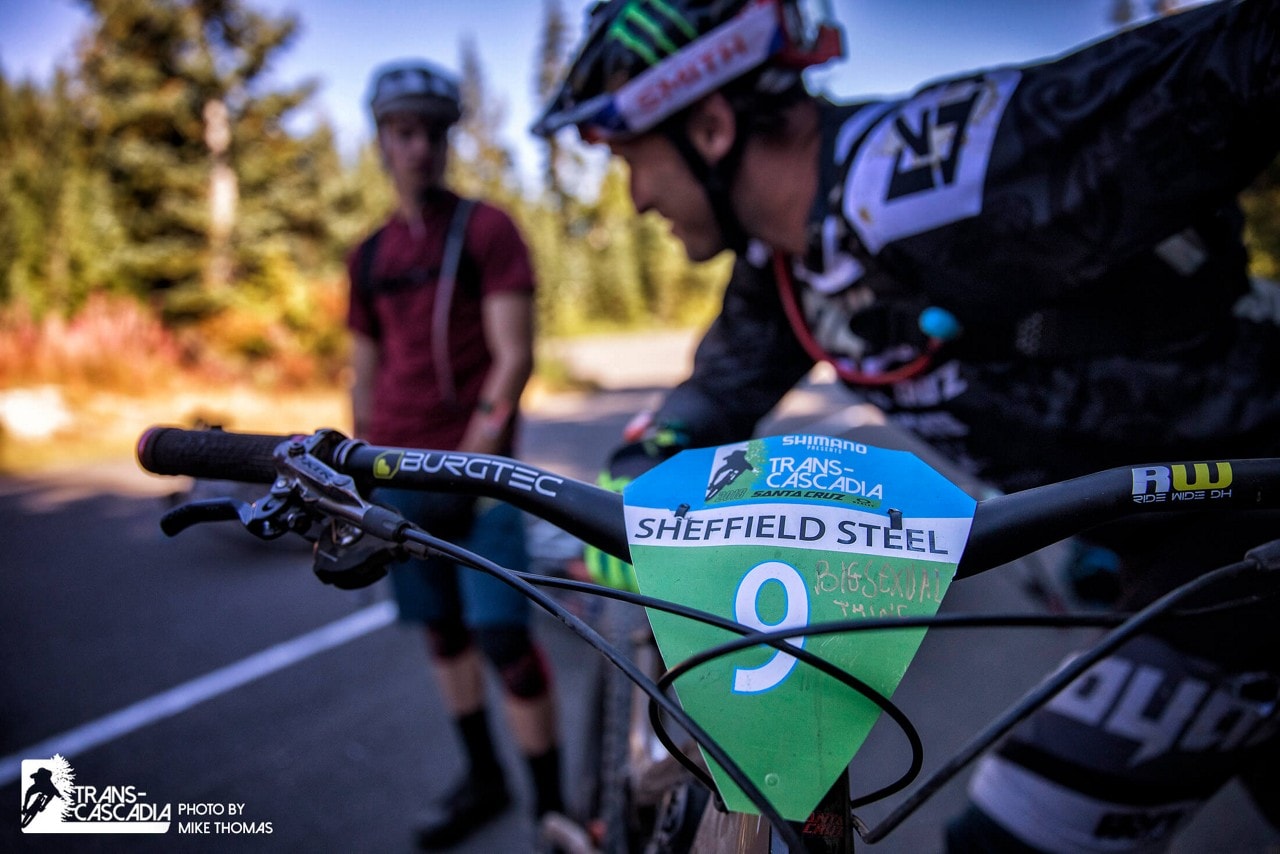 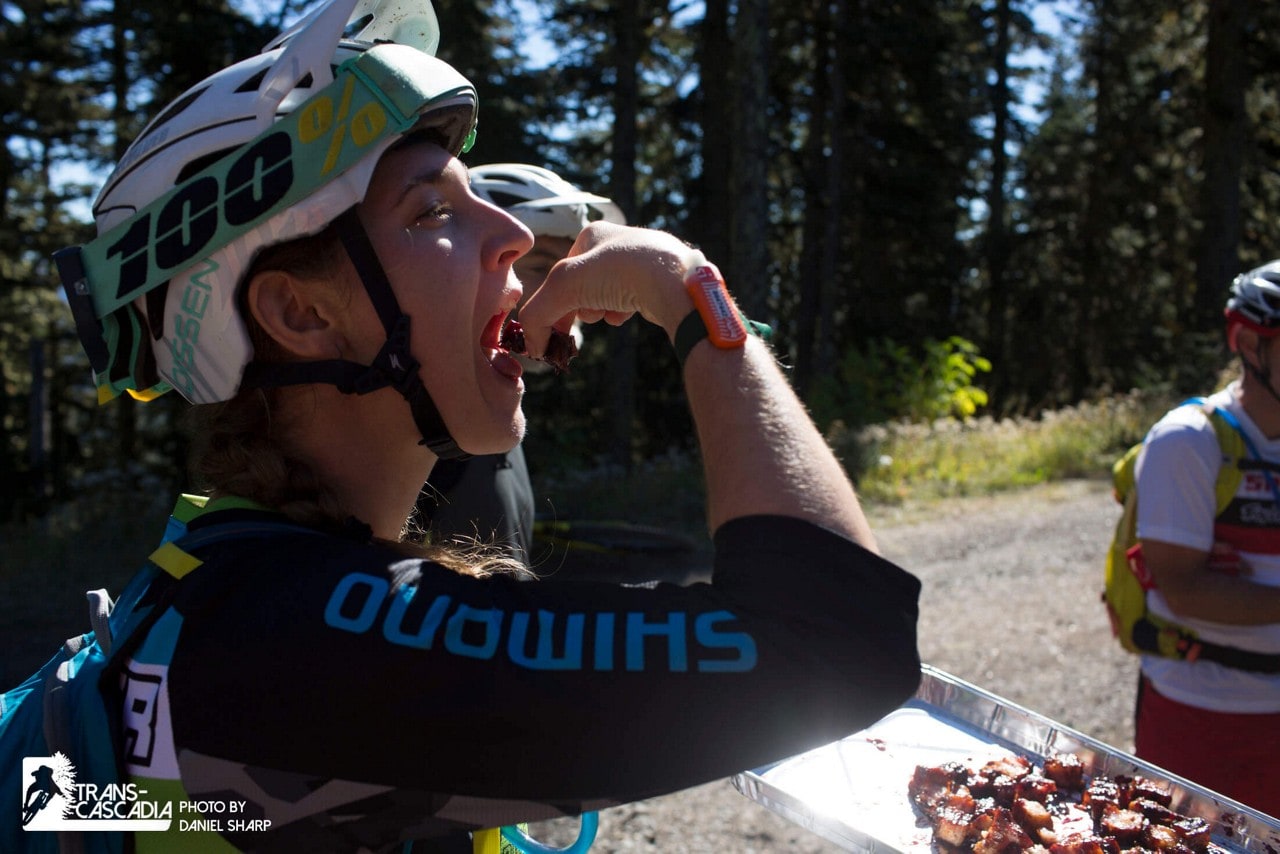 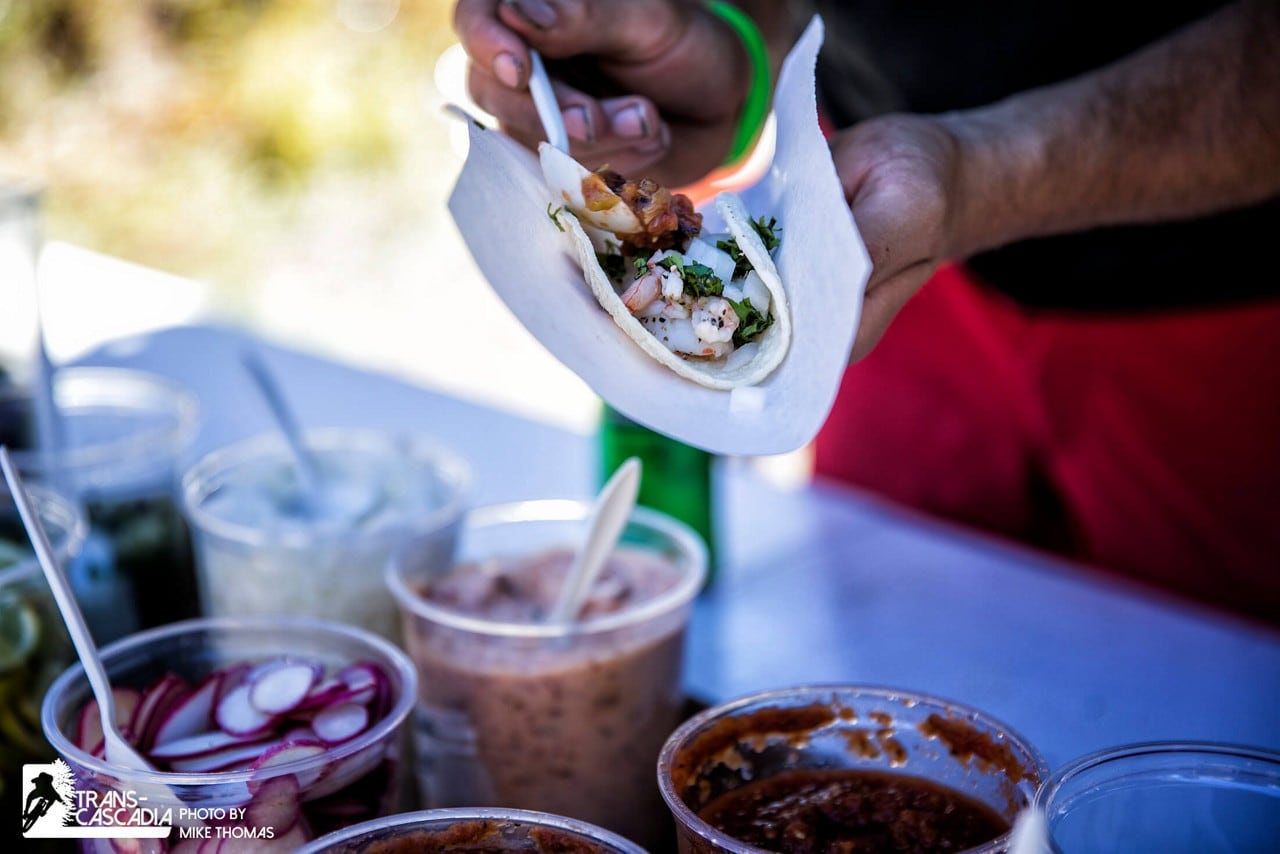 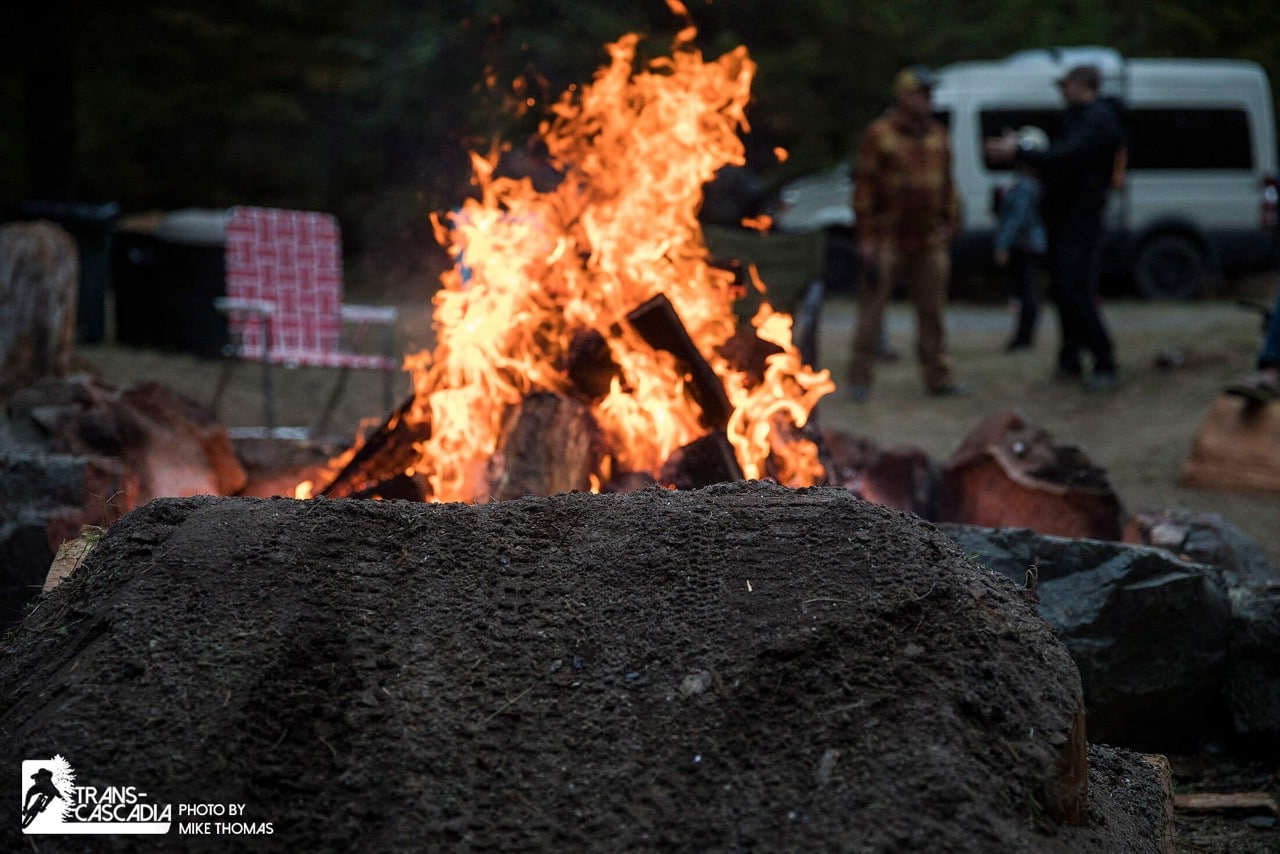 Day 3 saw racers traverse between the two basecamps riding east along a beautiful backbone ridgeline complete with rocky outcroppings and viewpoints of both Mount St. Helens and Mount Adams while the production crew packed up the event’s entire existence and created the same home-away-from-home-but-deep-in-the-woods feel at the next location. Shuttles took riders about an hour out of camp where they had a 15-minute climb to the 2.5-hour ridgeline ride that would take them to Stages 8 and 9.

Francois Bailly-Maitre topped the Pro Men’s podium today with Loris Vergier in second and Geoff Kabush in third. “[Stage 8] was a tough one, really physical, especially the second half but the first part was super fun, fast, good berms, I could trust the grip,” says Francois. “Afterward it was just about fighting to get every second. But it seemed to work out because I managed to make a lot of time on this one, so it’s good. I made more time in the first stage, but I still had a good second stage. The second stage had more chutes and drops and rocks, more anticipation. It was pretty fun. Still fast and scary at some points. There are still five stages and I don’t know what to expect. Tomorrow is a long day, I will keep racing the same way. Riding clean and pushing hard when I can. We will see tomorrow night how it went!” 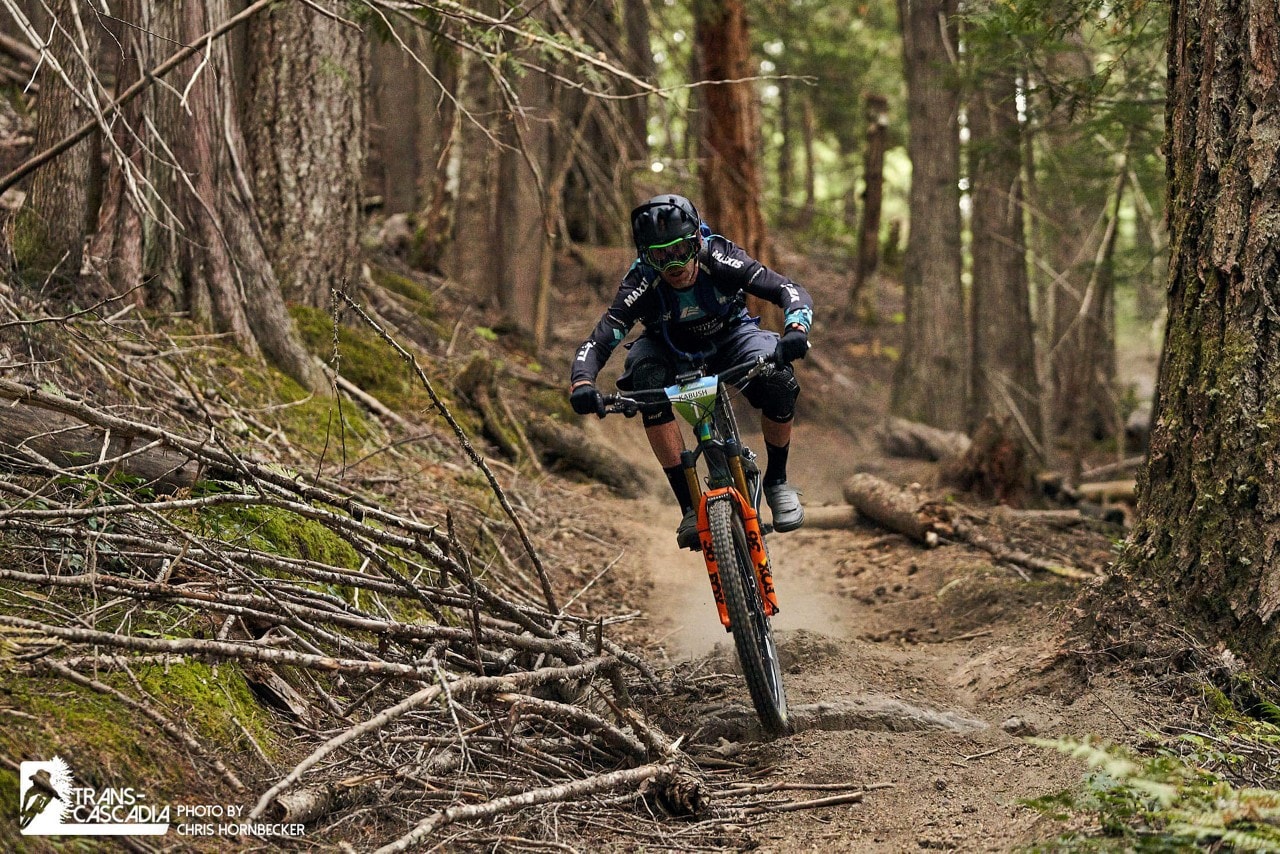 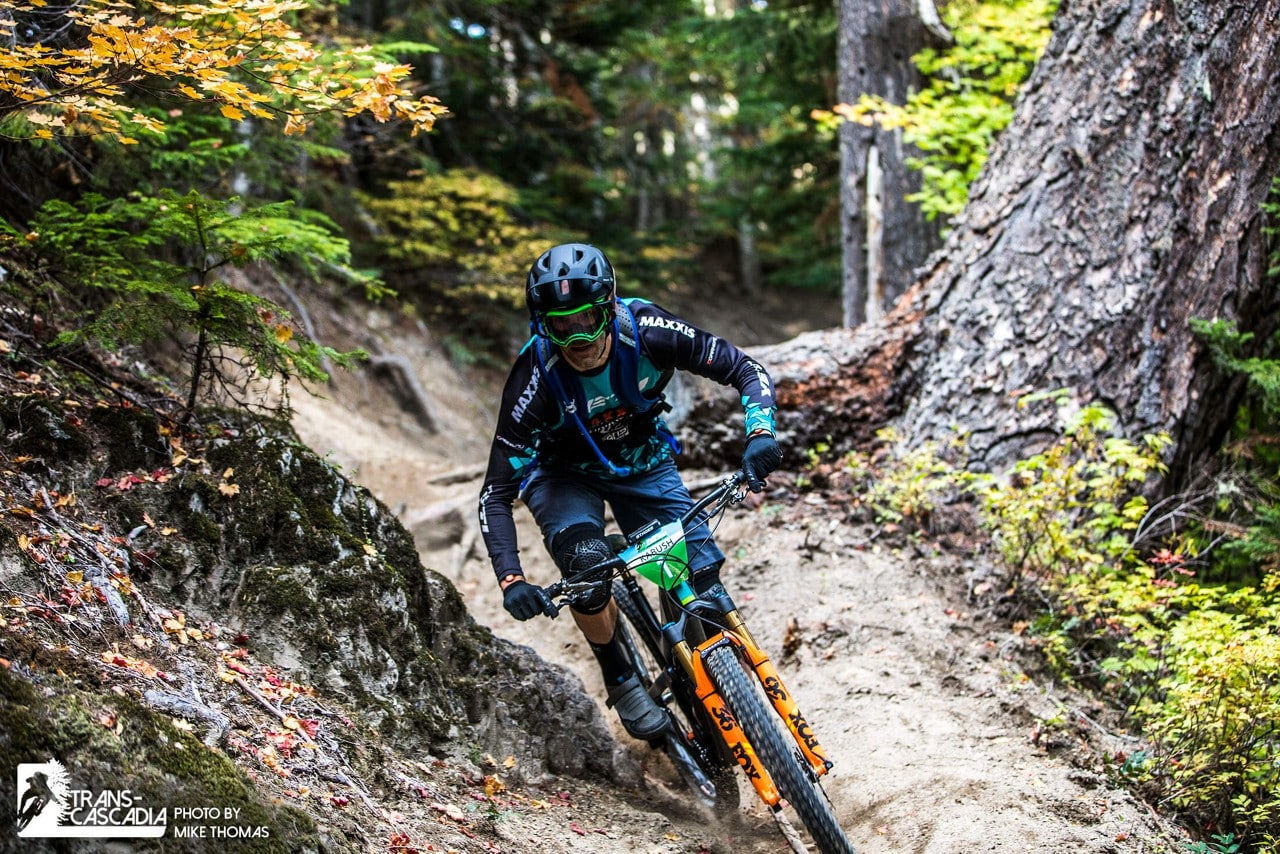 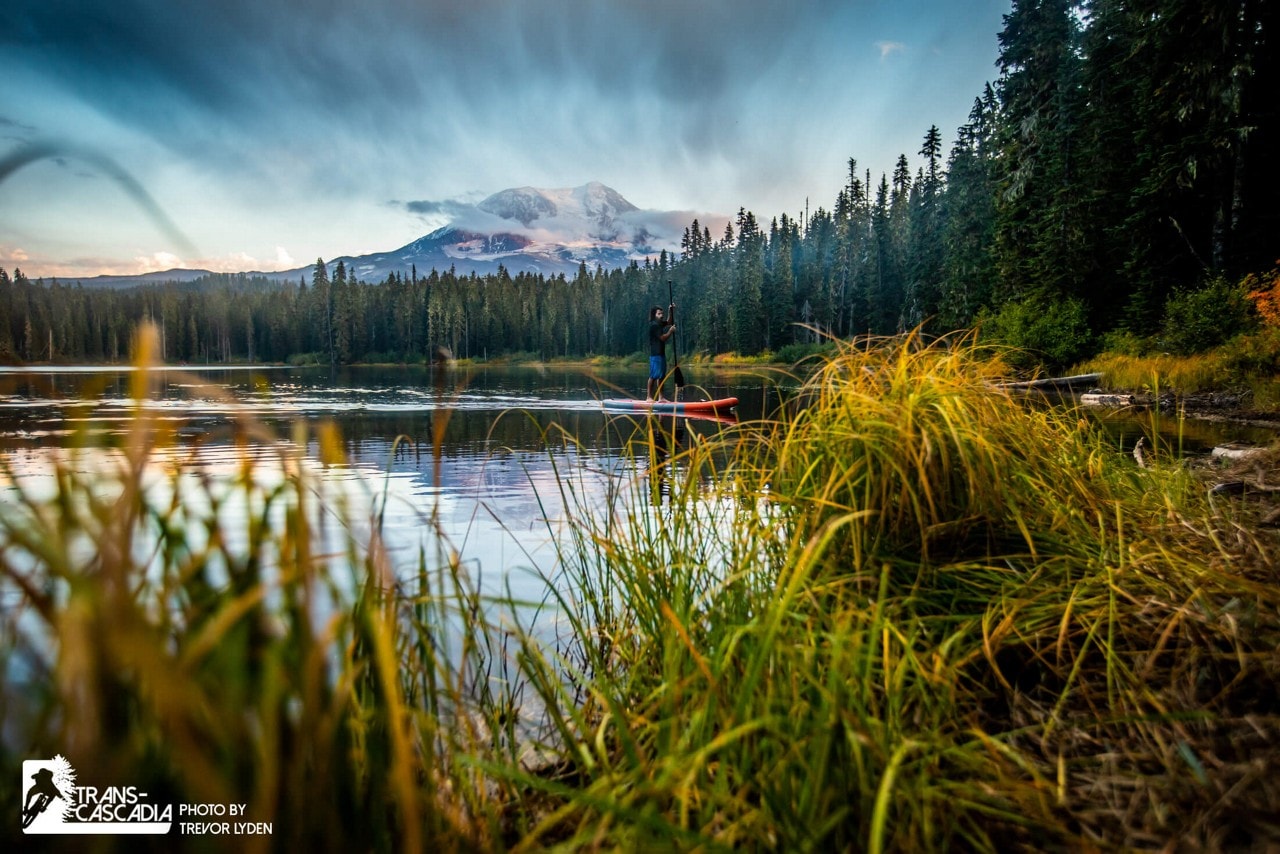 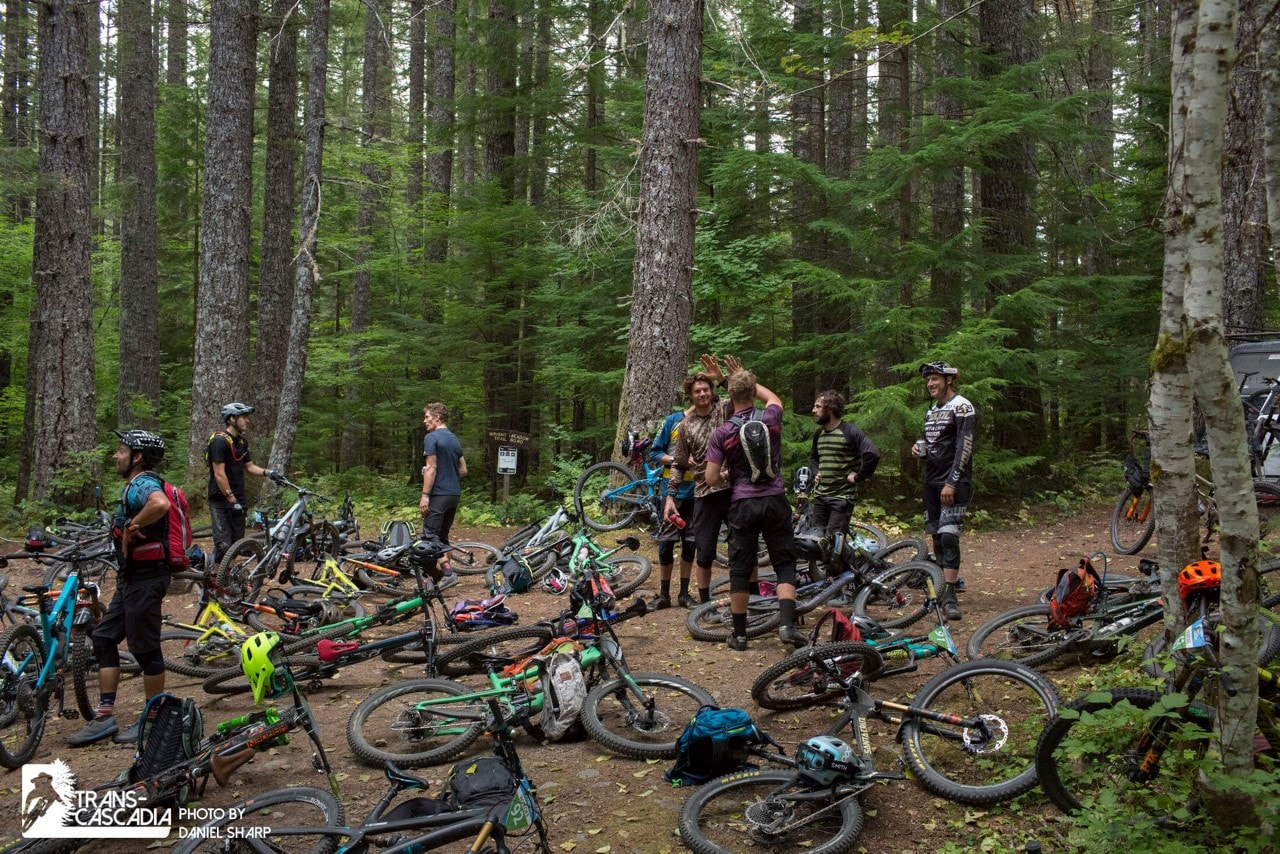 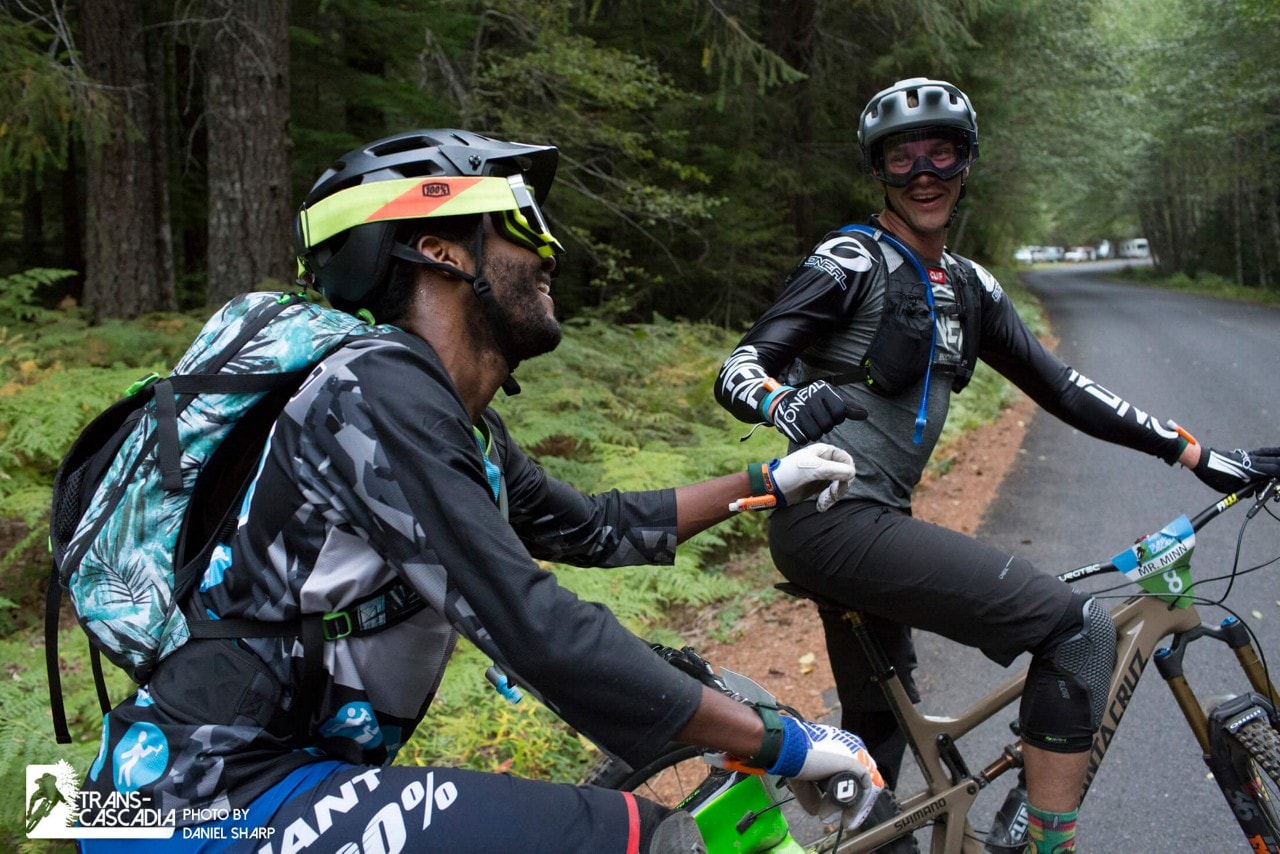 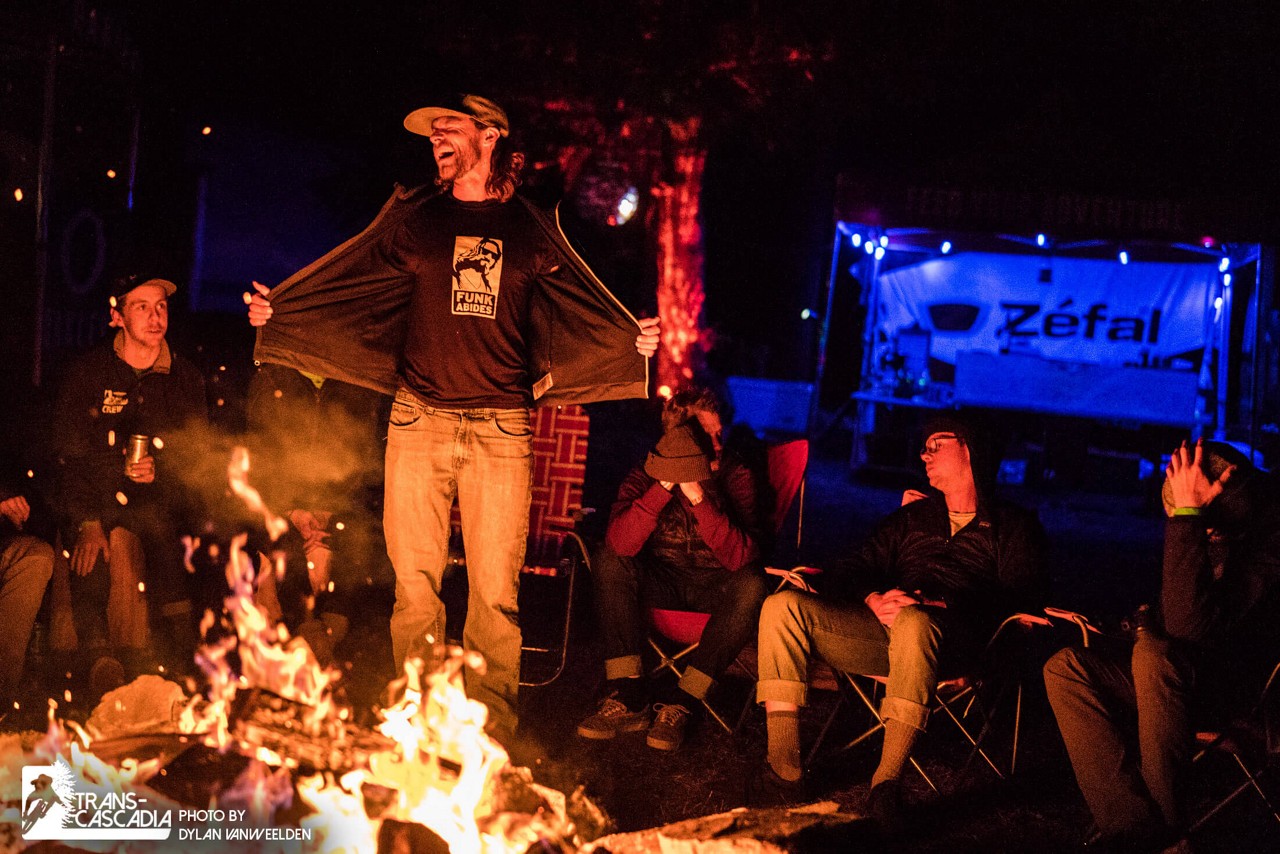 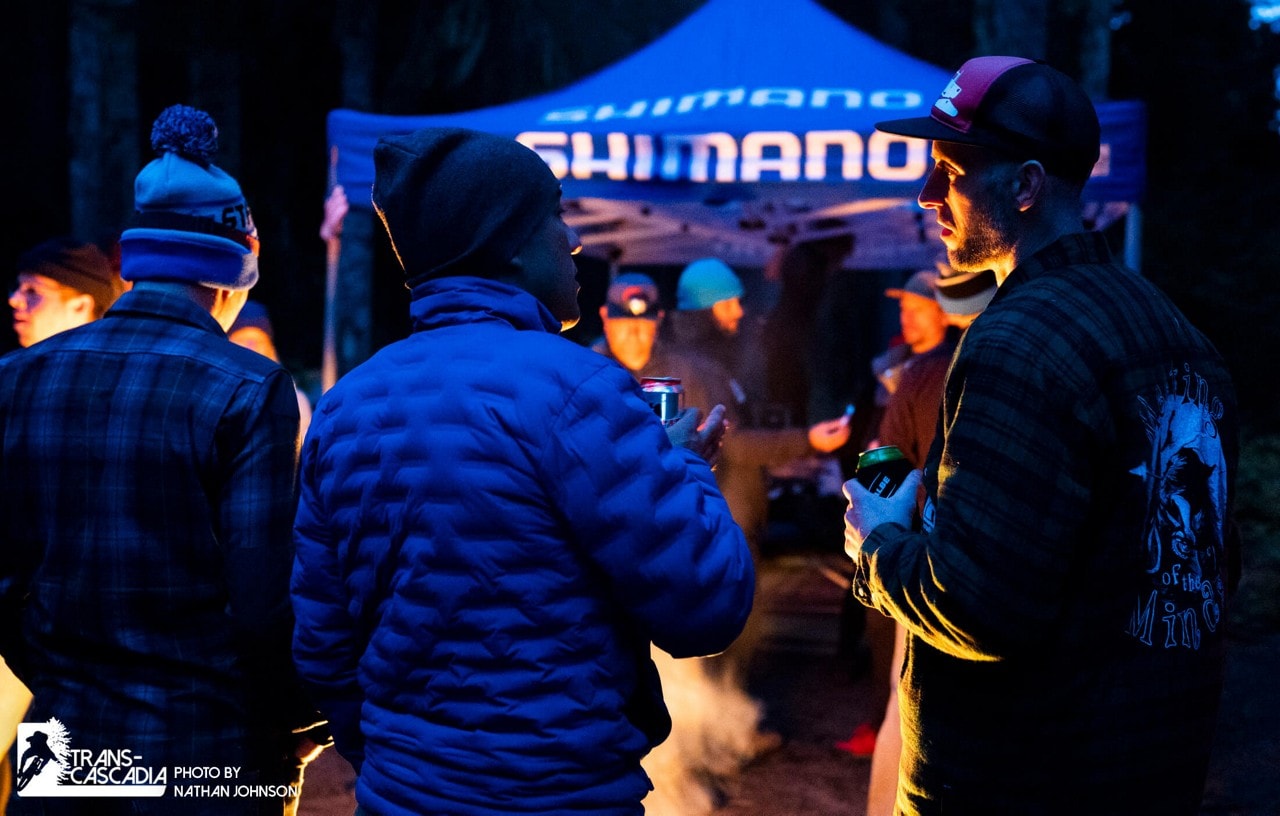 “Best trails, best conditions, best times, best feeling I’ve ever had on a bike – ever.”

Emily Slaco took the overall win in the Pro Women’s category with Kim Hardin in Second. Ingrid LaRouche came from behind on the final day to take the third step overall. “Last year at Trans-Cascadia was my first time ever doing a multi-day race,” explained Ingrid, “it was all a learning experience. I was racing a lot more this year, so I was a little more familiar with this. There were a lot more girls this year than last year, so the competition was pretty stiff. The event is so cool and [women] should come and participate more.”

In the Pro Men’s category, Loris Vergier took the top step with Francois Bailly-Maitre in second and Luca Shaw in third. “I knew that yesterday I had lost some time, but I gave it my all, so I did the same today and had fun,” said Loris. “I tried to stay on the bike – and I did. It paid off. Best trails, best conditions, best times, best feeling I’ve ever had on a bike – ever. It’s just good to be here and fun.” 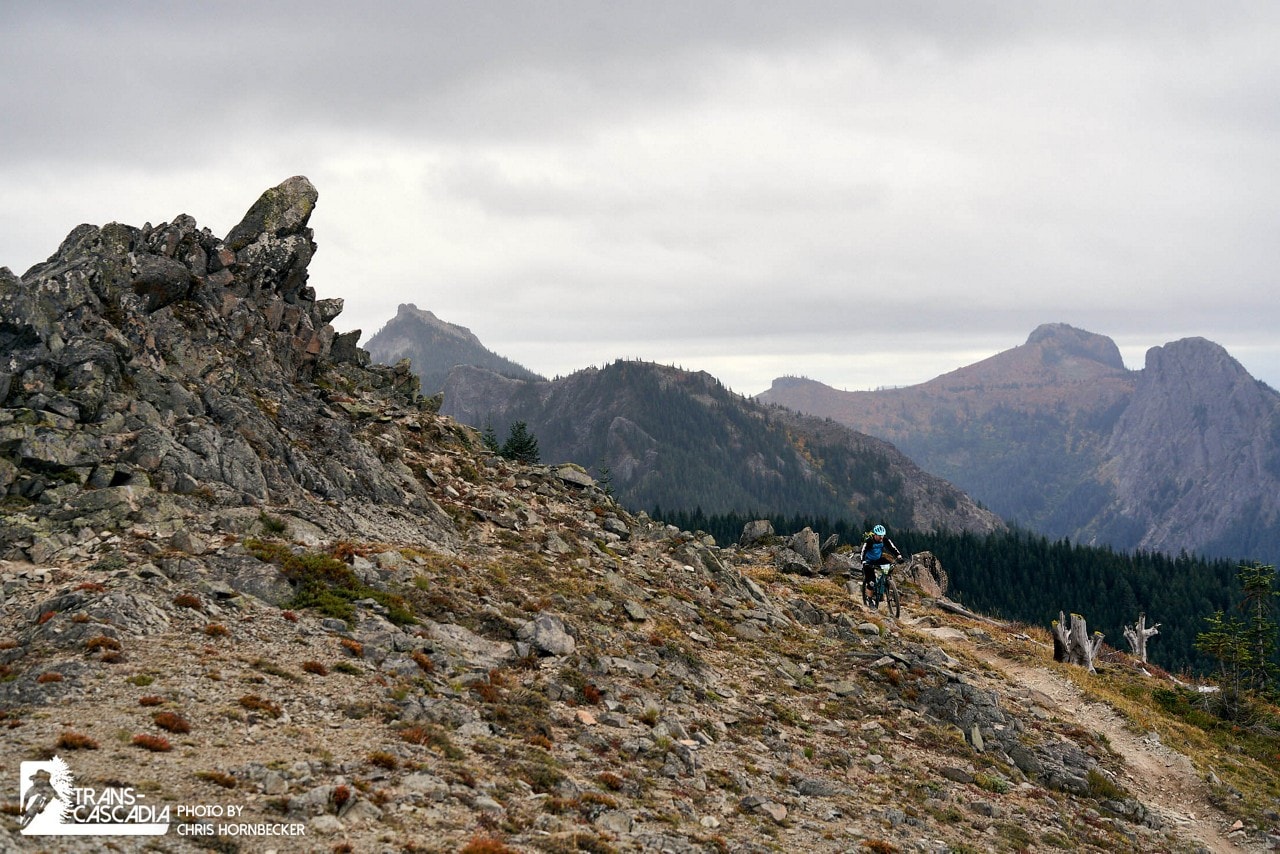 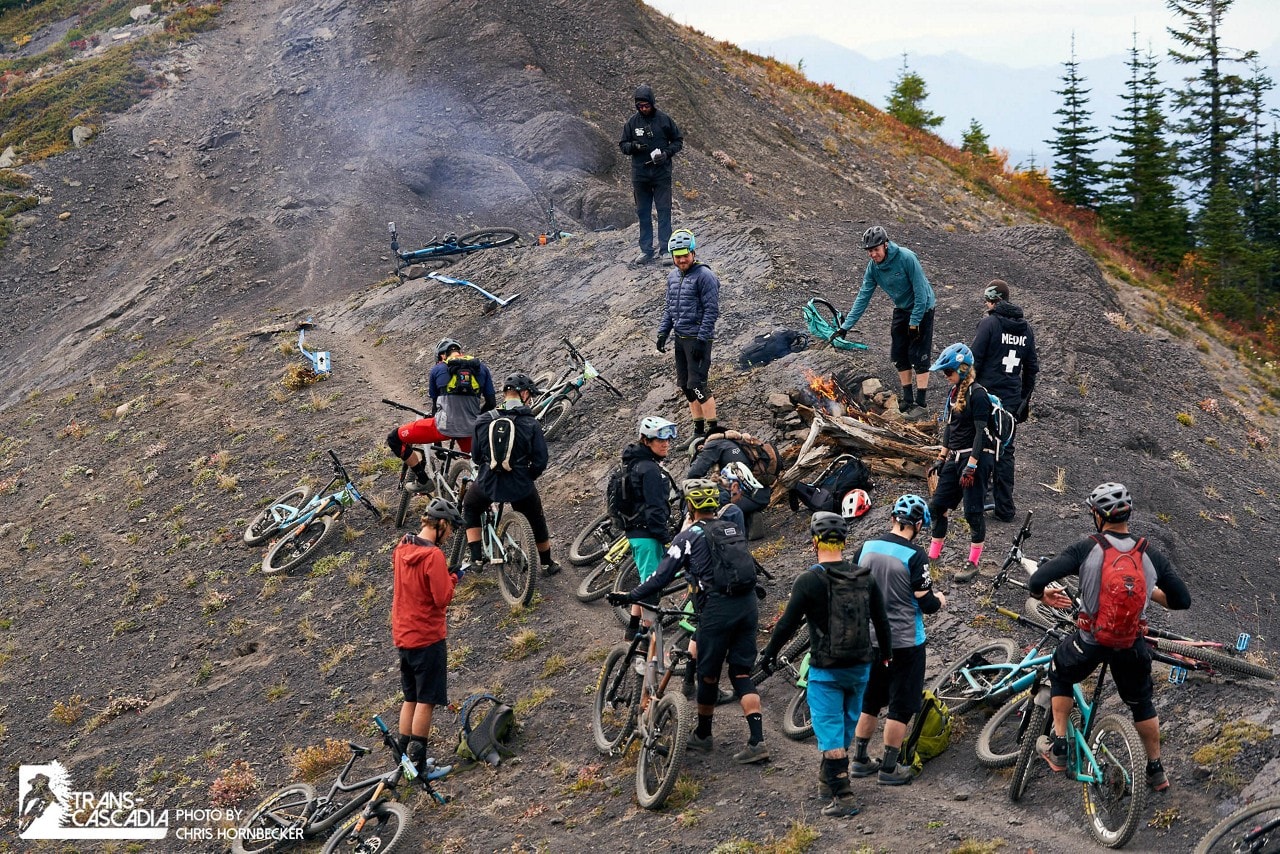 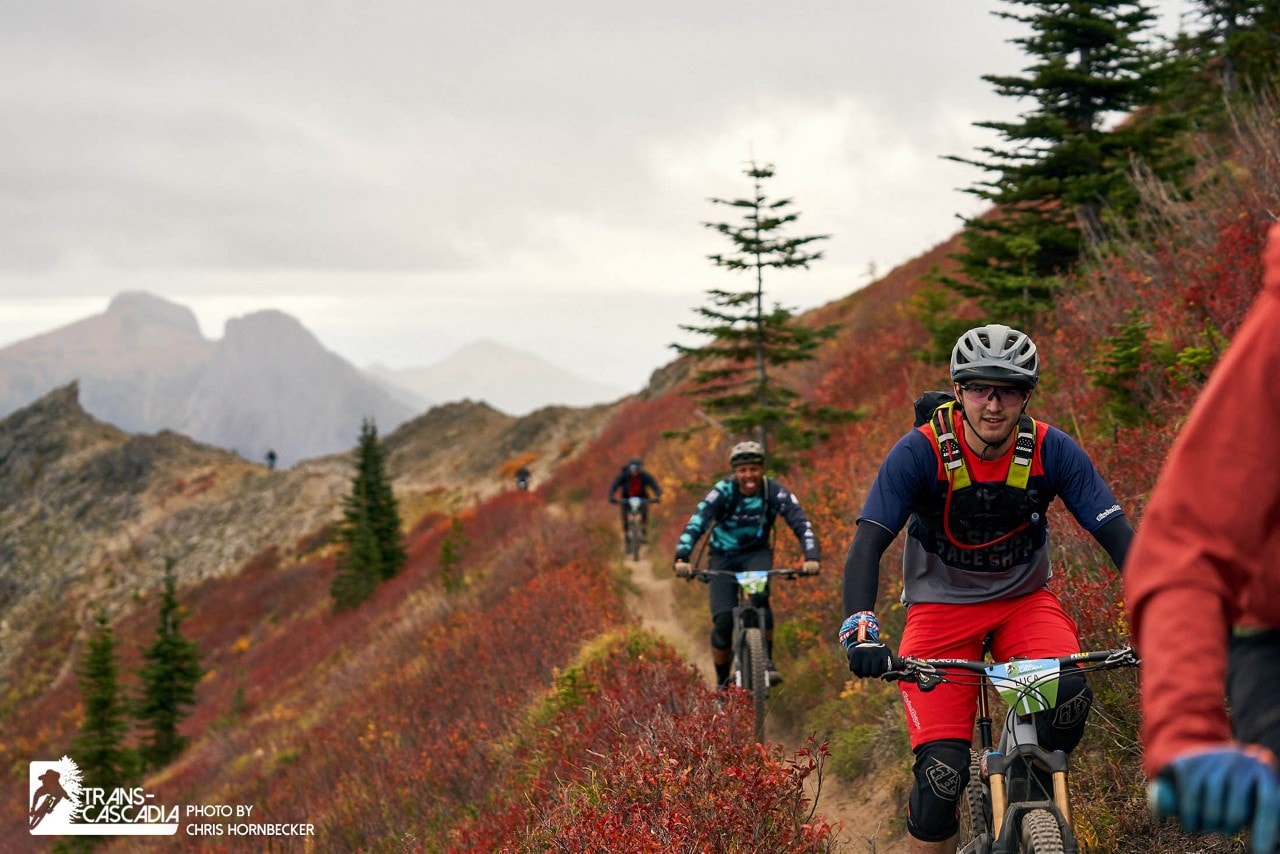 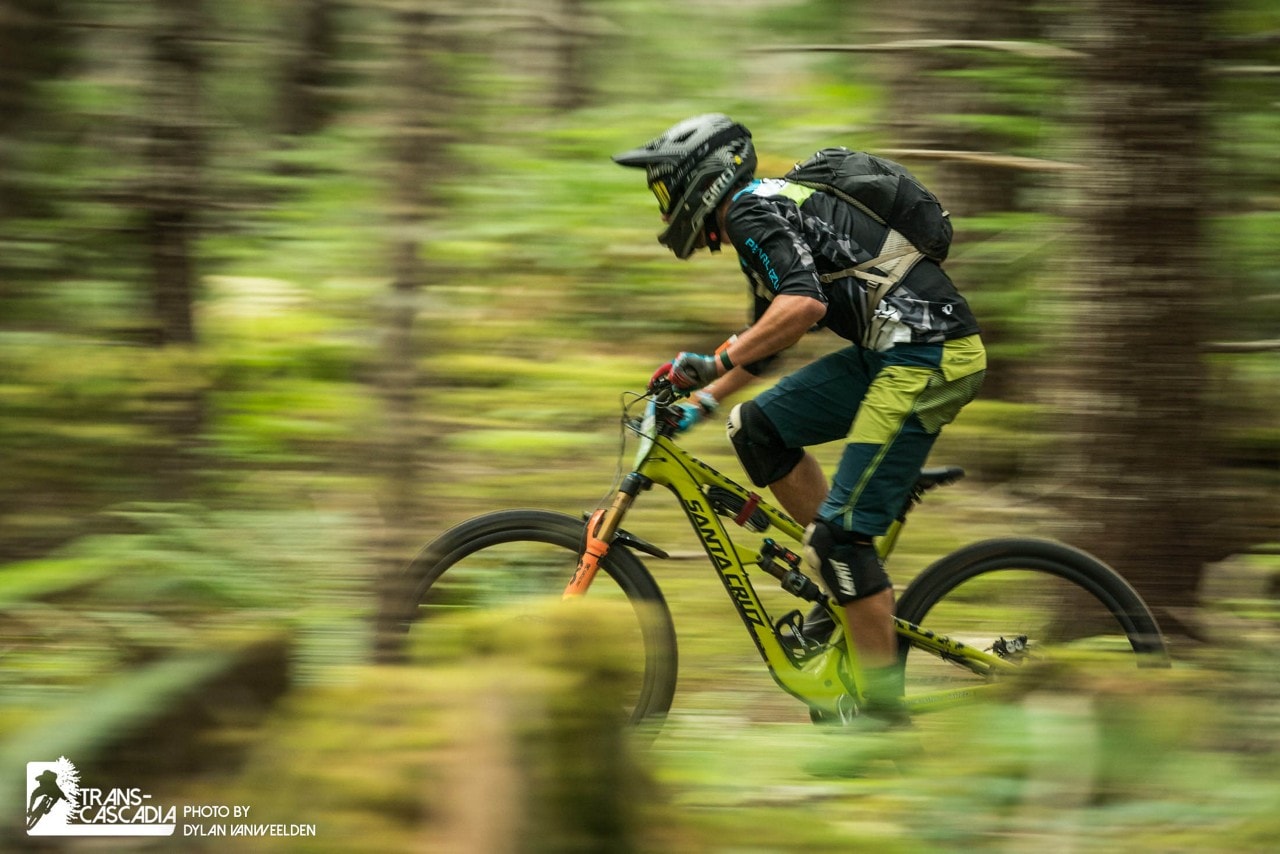 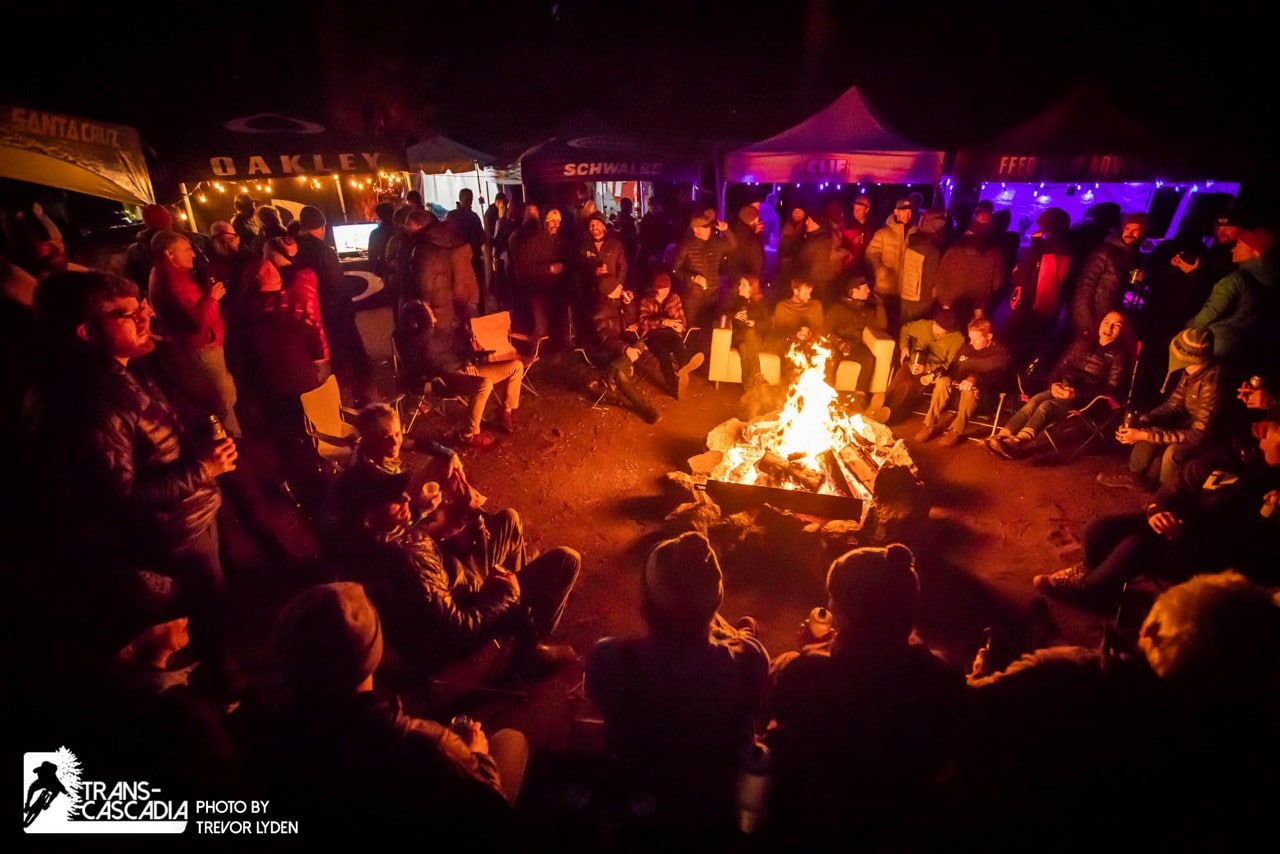