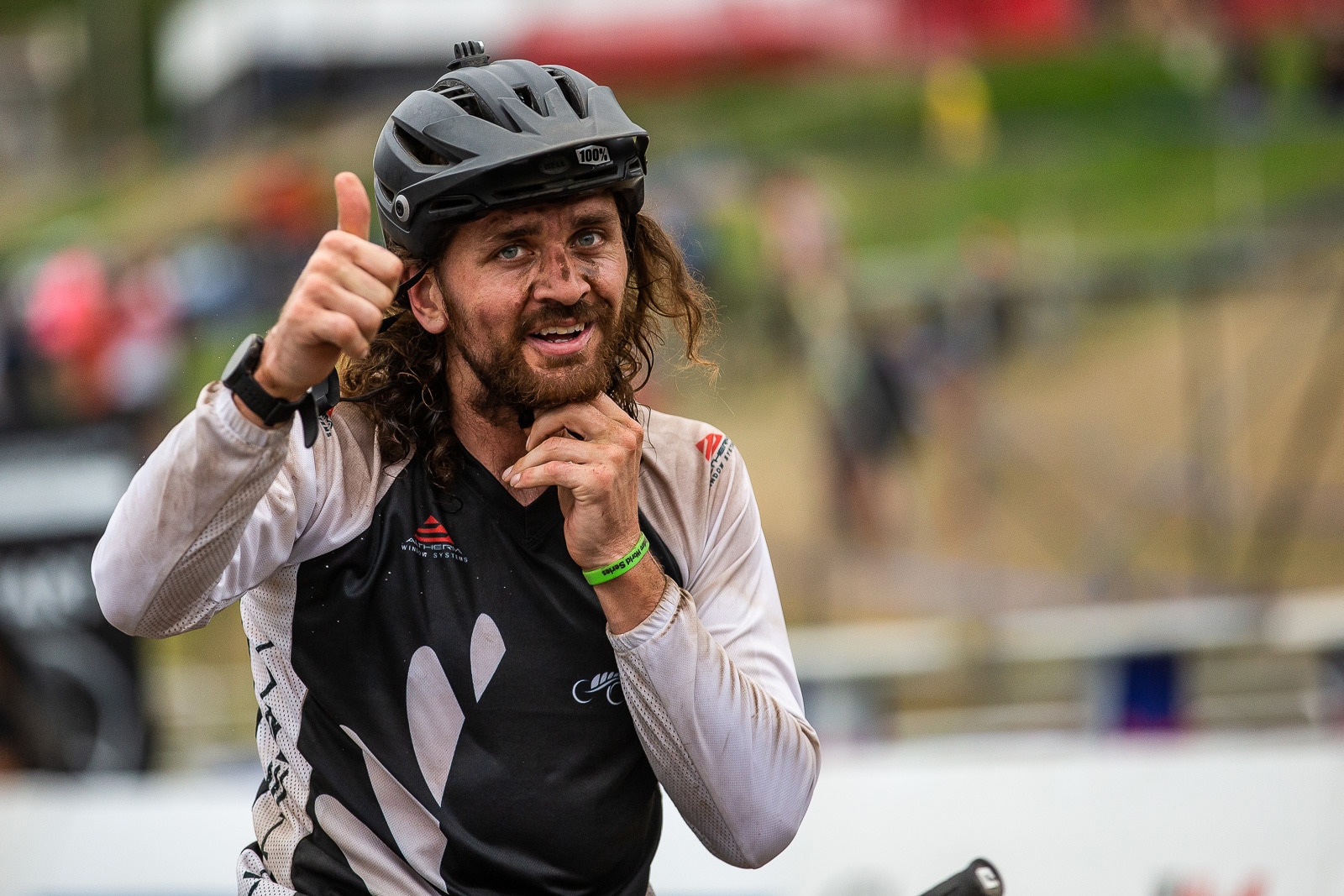 Thumbs up after racing the first-ever e-MTB World Championships!

Wyn Masters (a.k.a the king of having fun on a bike) recently added a new accomplishment to his resume - Wyn competed in the inaugural UCI e-MTB World Championship race at Mont St. Anne and won the medal for having the most fun during the event! 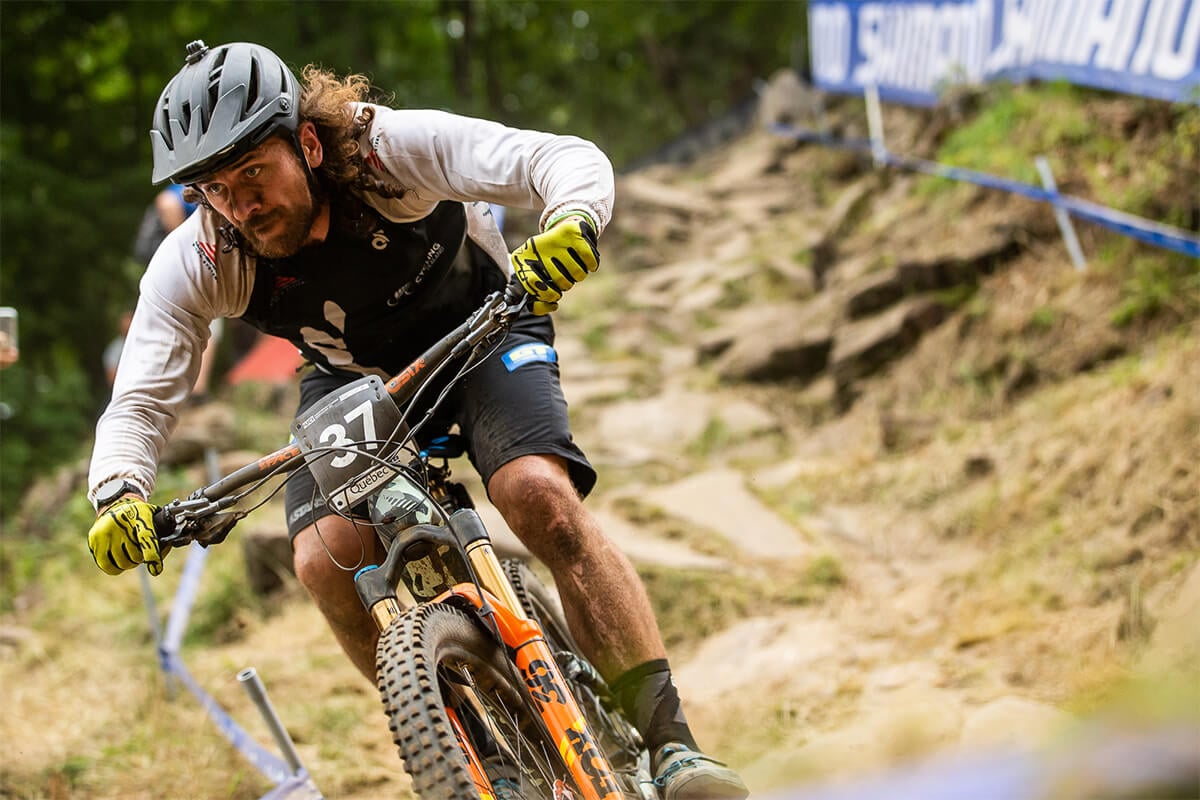 It turned out to be no easy task getting Wyn to this starting line. It's never a dull moment in the life of Mr. Wyn Master whose season consists of traveling all over the globe racing the Enduro World Series and select World Cup Downhills, not to mention hosting his YouTube series “Wyn Tv” at the same time.

Leading up to e-MTB World Championships, details of the event were somewhat obscure, but the idea of racing sounded like fun and with it being the first-ever e-MTB event, Wyn knew he had to do it. Two weeks prior, nursing a recently broken rib, Wyn spent the week in Whistler for Crankworx and then last weekend racing the loose, dry, dusty trails of the Northstar EWS in Northern California. With e-MTB World Championships on Wednesday just a few days later, and several thousand miles away, Wyn would have little opportunity to get prepared for the race. A full travel day would eliminate any chance of riding the course on Monday, leaving him just a couple chances to ride the course pre-race. Combined with limited track time, Wyn had only ridden an e-mtb just a couple times, let alone raced one. Bike power was maxed out at 250 watts and motors were set to stop assisting racers at 25kph.

Travel day gone bad…flight delays, missed connections and spending the night on a plane meant missing the second e-MTB course training session on Tuesday for Wyn. All Shimano STEPS e-bikes were required to be clocked to the 25k maximum speed setting prior to the race and with the last substantial training session nearly done, we were yet to see Wyn or his GT e-MTB. Finally, late in the day a message comes across that Wyn has arrived at MSA as has his bike but there was a problem. Turns out the e-bike Wyn would ride was delivered without the battery! This would normally not be a big issue considering we had our full Shimano support truck here at the event, but the battery GT uses in this bike is a very new model and our support rig had not received any of these particular batteries yet. With the e-MTB race the next day several options were explored all to no avail. Luckily a last minute solution was found and a battery arrived just in time for the early morning one hour inspection time. The only issue was the battery was not charged, so the crew scrambled to get some charge into the battery and get Wyn on course. In the end Wyn was only able to get a single practice lap in on the very challenging e-MTB course. Never to let things get to him Wyn took it all in stride and was just stoked that he had a bike ready for the race that would take place in a few hours. 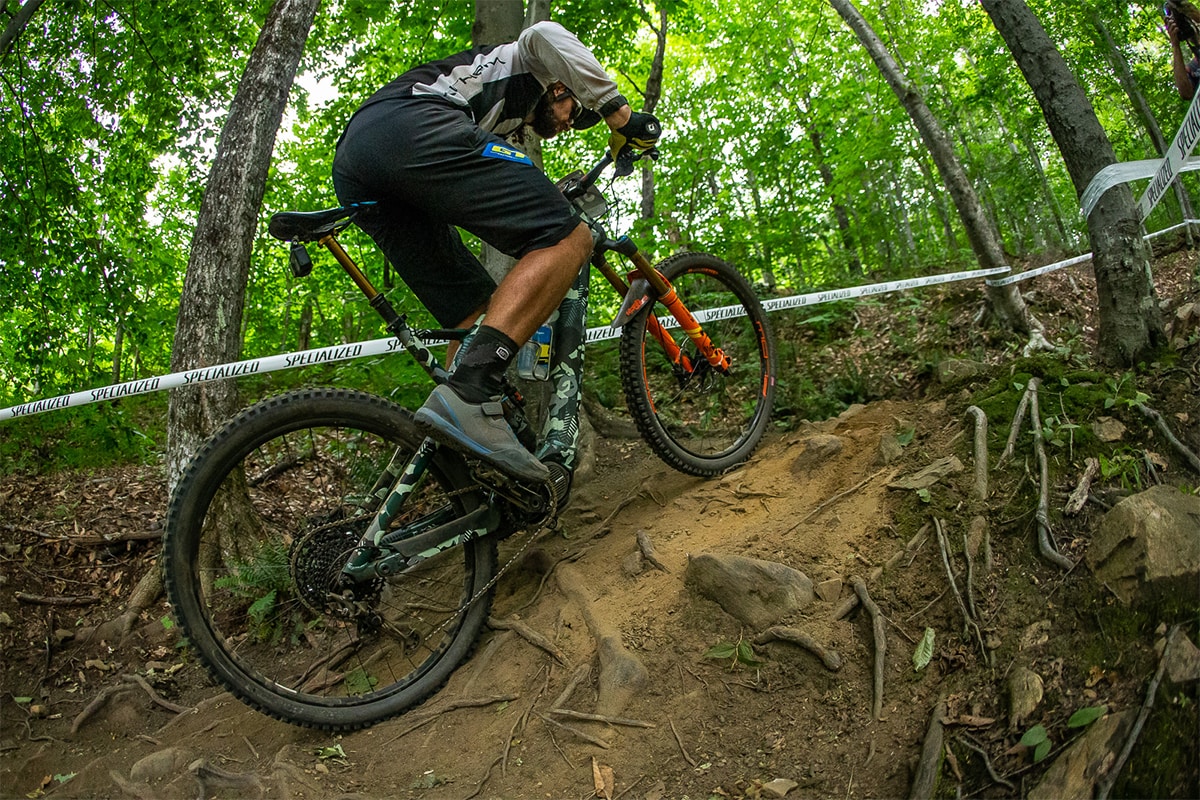 There was plenty of climbing on the 6km course.

Once on the starting line Wyn was excited, but fairly far back in the pack. Although Wyn is fit a rider he was lining up against some World-Class cross country athletes and really didn’t know the course or even have much e-MTB racing experience at all. In typical Wyn fashion, he still approached the race with an enthuisiastic and excited mindset.

“I was kind of relaxed because there was really no pressure and I was just ready to see what happens and give it a go. I was wishing I had more than one lap practice though!”

e-MTB racing brings together so many disciplines. There were racers from XC, Enduro, 4x and Downhill giving the race a shot.

With the race underway Wyn made his best efforts to get through the pack, but this type of racing was not exactly something he had trained for and found himself fully gassed on the longer climbs. Each lap Wyn improved his times and also found time to entertain the crowds with his signature style on the bike. Of course Wyn was going to get rad along the way.

“It took me about two laps to sort out the right way to ride an e-bike and also to find the right lines on the track. Pretty soon into the race I realized the idea of a Top 10 wasn’t going to happen so I just had some fun. I still gave 100% effort because ya know it is a race. I was pretty smoked half way through, but then I began to find a rhythm and ran faster laps at the end of the race." By the end of the race, Wyn started to get the hang of riding the e-MTB and made several last lap passes including a pass with just a few turns to go. “I had a run in with a French guy, but thanks to my 4 Cross experience I gave him a bit of an elbow and pushed passed.” At the finish Wyn still had enough energy to cross the finish line with a one handed wheelie - definitely the only rider to do this! Crossing the finish line with his signature Wheelie

Before and after the race several Shimano engineers who specialize in e-mtb spent time with Wyn asking him his thoughts on racing e-mtb. Pushing things at race pace is generally the best way to find out where changes need to be made, and 4 laps on this course was definitely a good starting point. It was also particularly interesting to get feedback from someone who has little experience on an e-MTB but tons of pro level experience on a mountain bike and have him go full gas for four laps on a challenging course. Wyn and the engineers learned a lot from this experience and both parties will take what was learned and come out swinging at the next e-mtb race! Shimano Engineers from around the World chat with Wyn for his feedback. 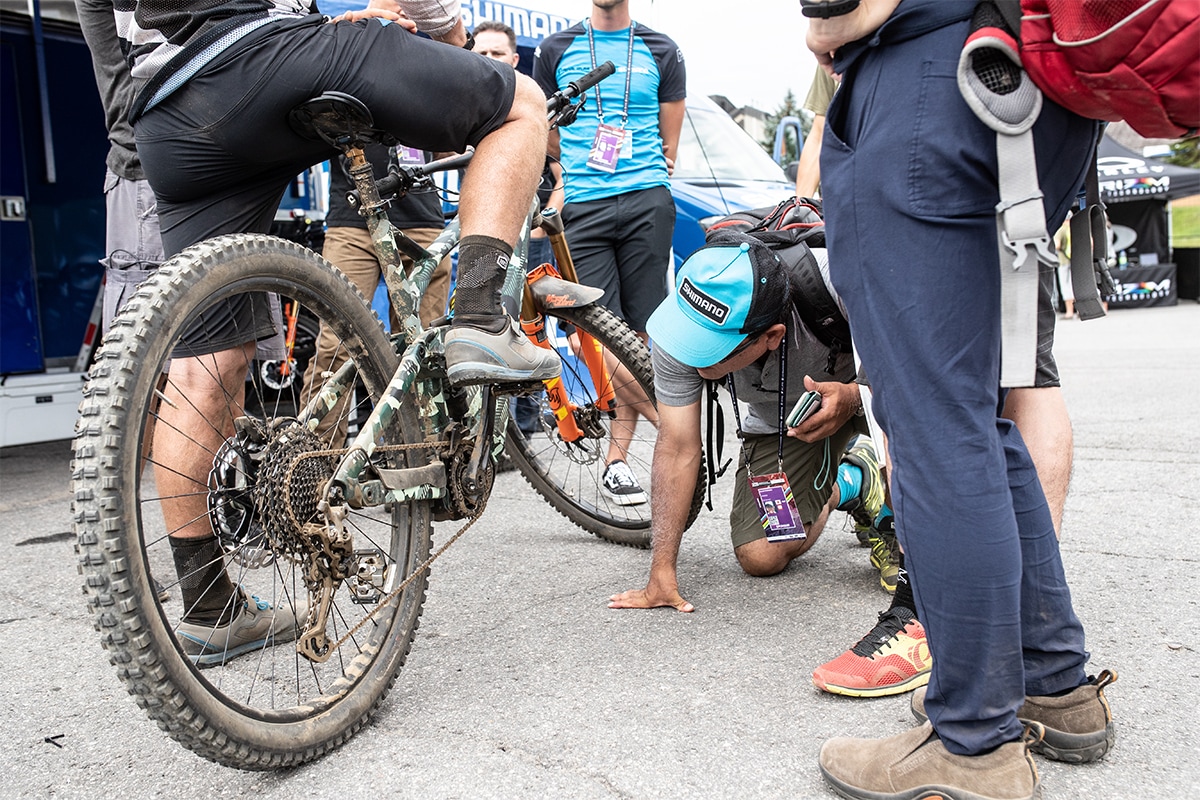 A few final thoughts from Wyn:

“E-bike racing is so new and nobody knows where exactly its going and what the best set up is, but it’s good to be a part of it from the beginning.”

“I think e-bikes are here to stay, so why not embrace them. I know people think its cheating, but I welcome anyone to come out with me and my brother on a e-bike ride and see if you can hang if you think e-biking is easy.” 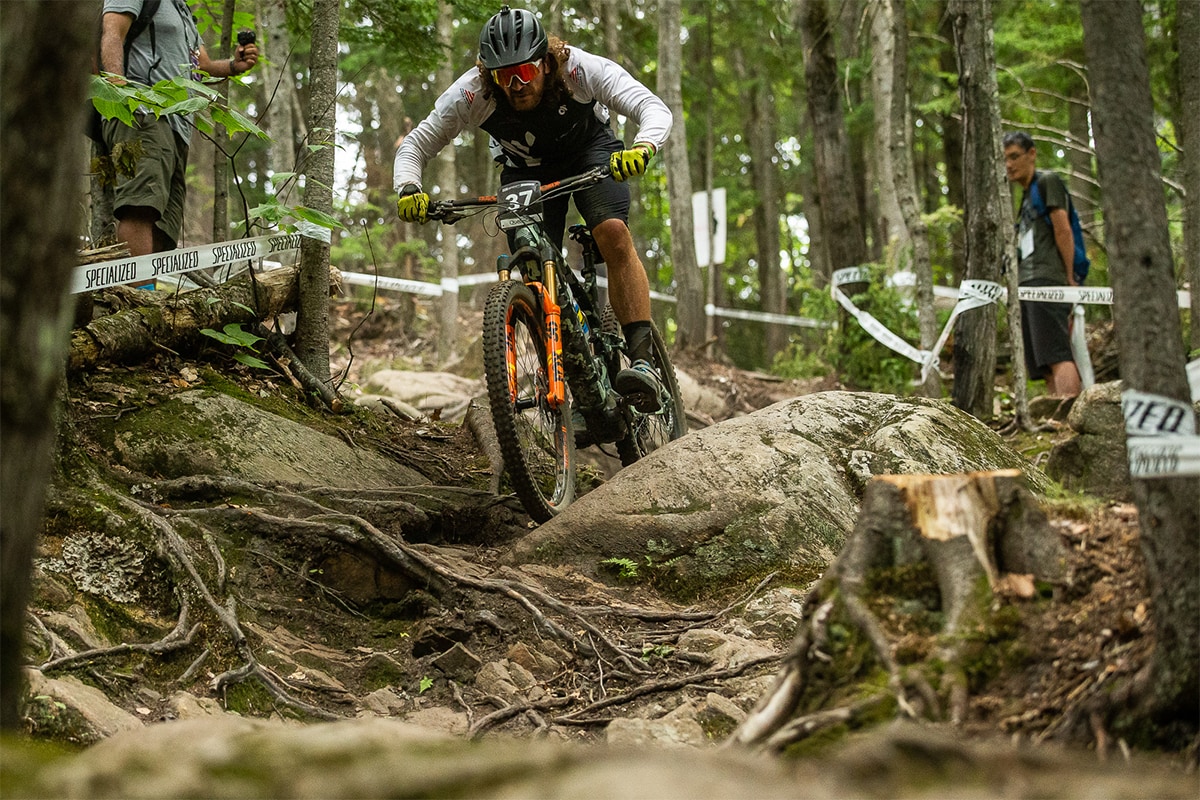 “The majority of the course was quite good. It could use a few more technical climbs rather then so much gravel climbing to keep it closer to favor the more technical rider. I heard the winner of the race say it was one of the hardest efforts he had done all year.” Wyn also pointed out: “With the added travel of the bikes you need to go fast on the downhills so you never taking it easy, so in some ways racing e-bikes can be more physically demanding than just racing a standard XC race.” 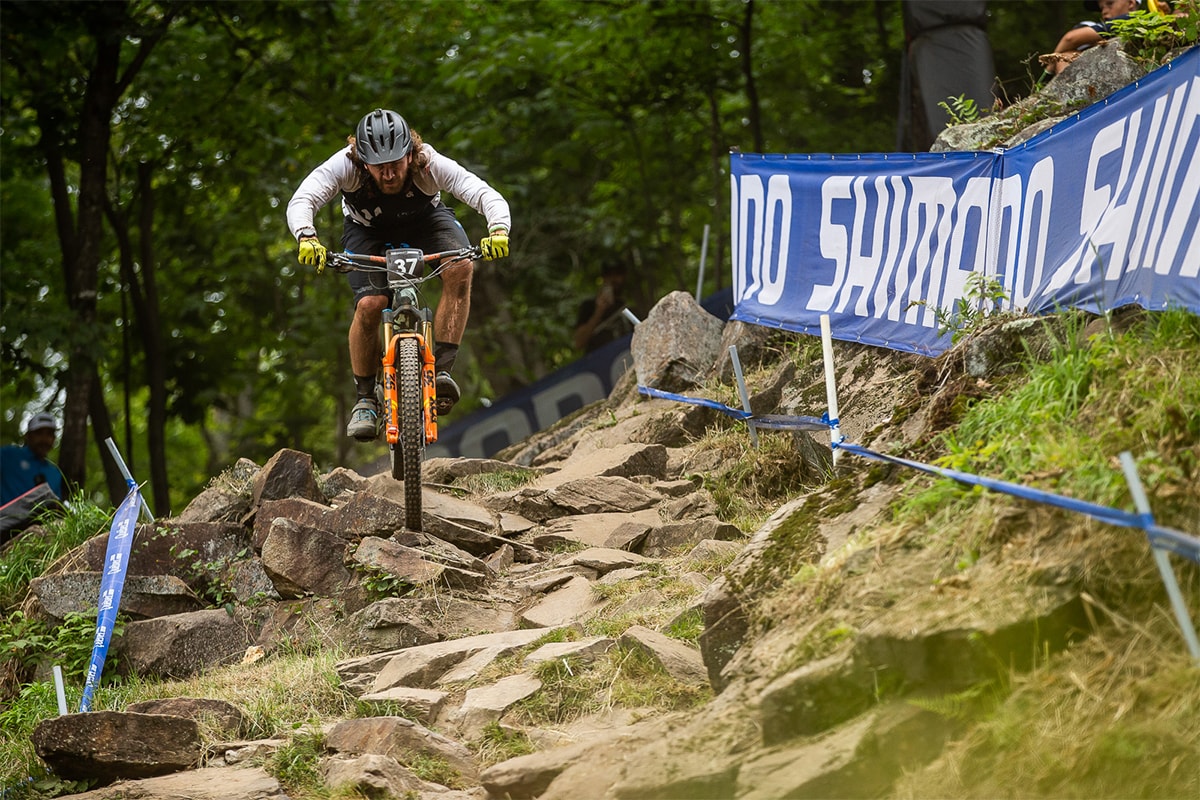