Trans-Cascadia is a four day backcountry, blind-format, mountain bike stage race that takes place in the Pacific Northwest. Shimano is proud to support Trans-Cascadia for the 4th year. Click here to watch the Trans-Cascadia Experience.

Before the adventure could begin riders from all over the world had to find their way to the Stargazer Farm, located just outside of Portland Oregon. Once arriving riders would be greeted with delicious tacos made fresh by one of the many amazing chefs that would be feeding the 120+ athletes, staff and volunteers throughout the race. Bikes would be unpacked and loaded into the waiting fleet of shuttle vans. Final decisions on what to jam into their one bag for the upcoming four day, five-night adventure into the backwoods of Washington would be done with no chance of making changes once the caravan began. The idea of getting this many people into the backcountry is no easy task and takes the event organizers from Trans-Cascadia Excursions Alex Gardner, Nick Gibson and Tommy Magrath months and months of planning and preparation. Also, add in the three major build parties that many of the racers and volunteers participated in through the summer months and it’s clear that is a real labor of love!

Once loaded up, computers and modern technology were left behind in favor of a diverse selection of clothing and camping gear. The several hour drive would take the group into Washington State and to the first of two camping locations. As the group arrived at Takhlakh Lake, the location of the first camp, they were greeted to a stunning view of Mt. Adams reflecting into the lake. Once that was absorbed, athletes would locate a tent and get settled in and enjoy activities around the fire pit and get ready for their first gourmet dinner of the week! 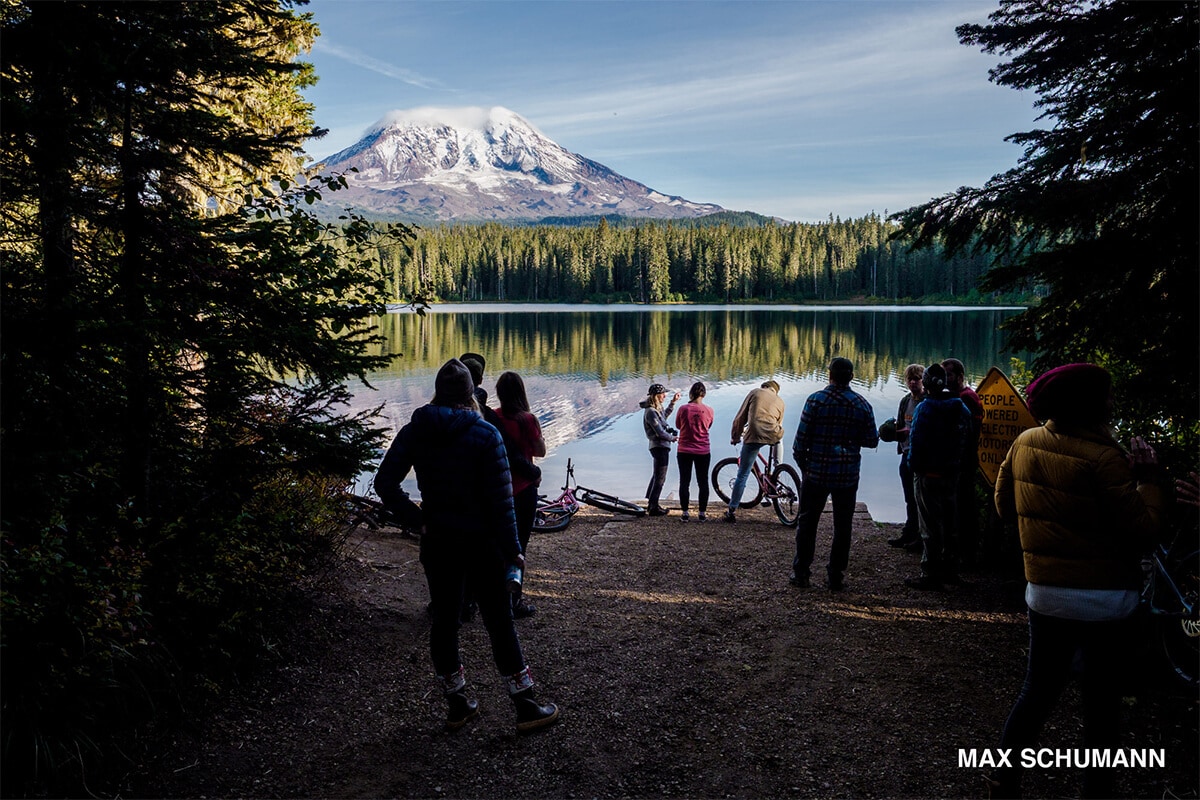 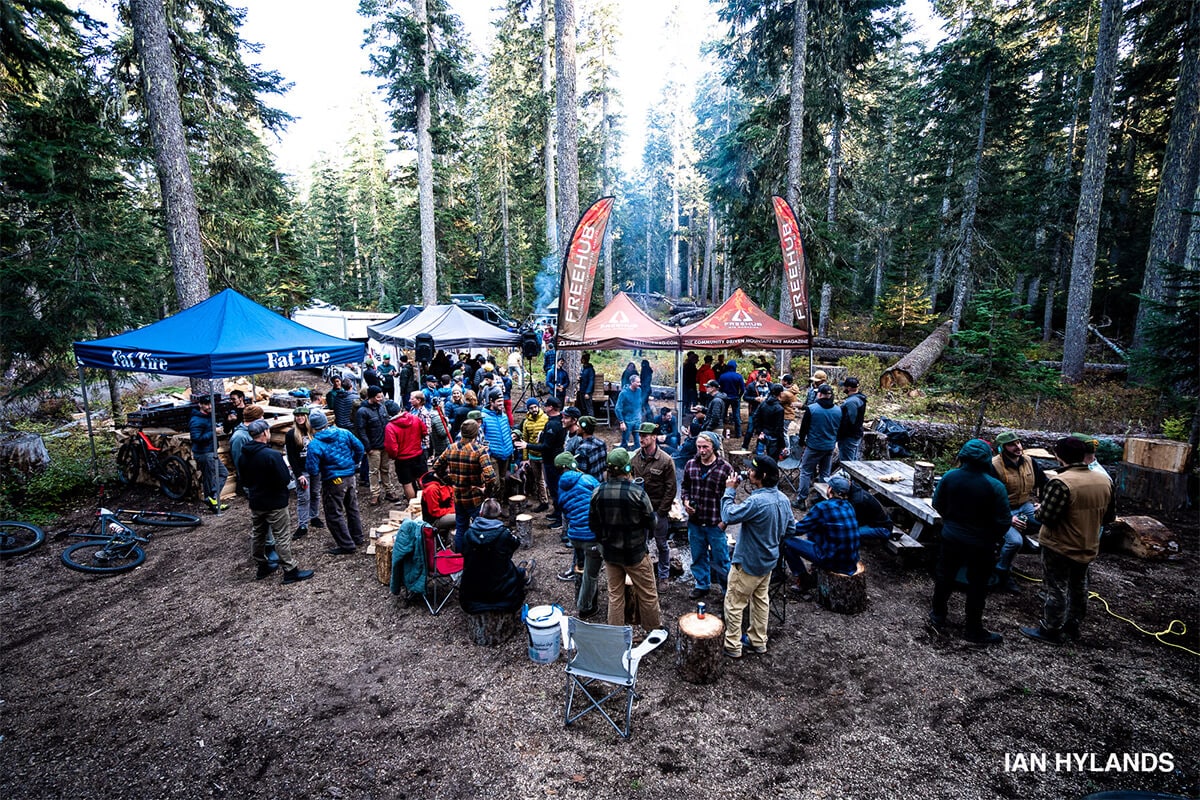 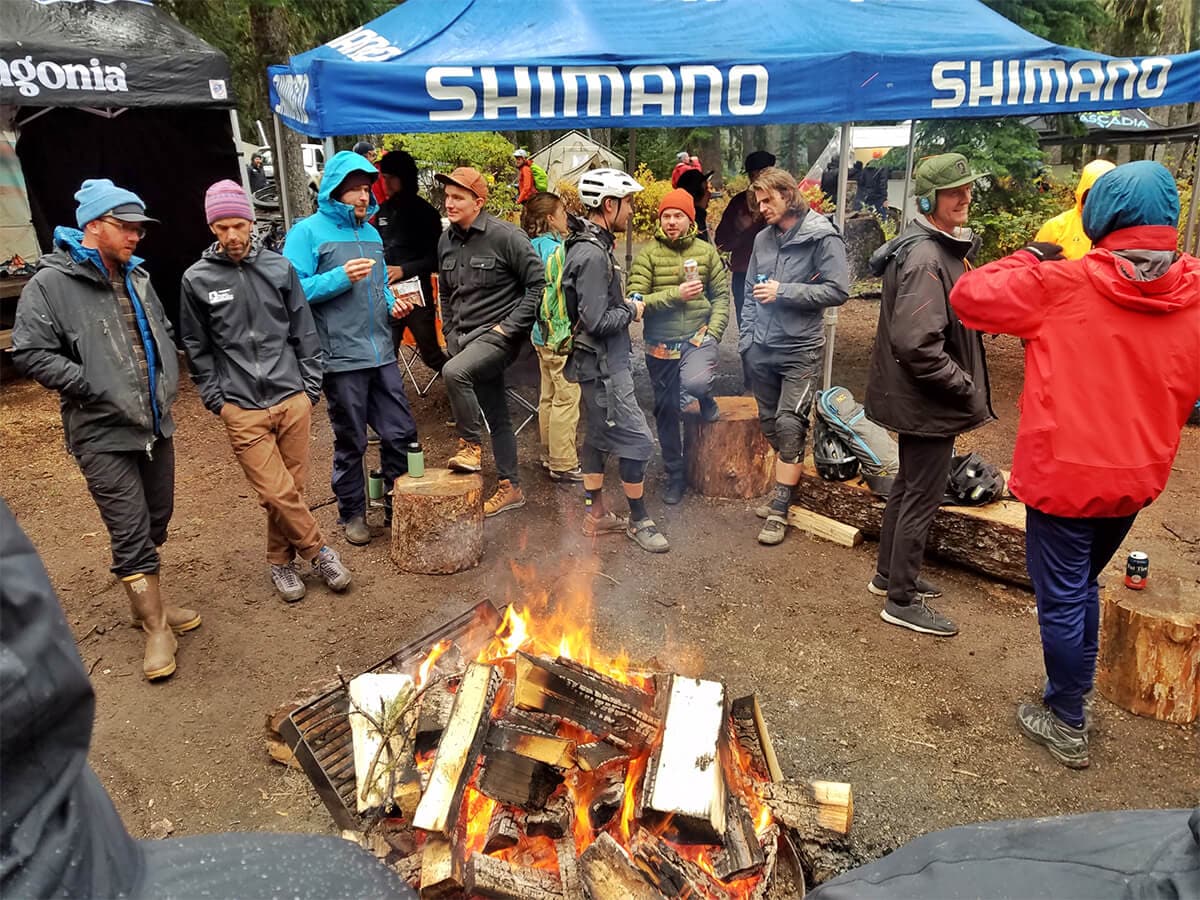 Racers were up early and lined up at the shuttles at 8:30 am Thursday morning for the start of the 2019 Trans-Cascadia. Day one of racing consisted of nearly 20 miles of riding with 4,500ft of climbing and 7,700ft of descending. The day started out with thick fog that turned to rain. At the end of day one Chris Johnston, Geoff Kabush, and Aaron Bradford were rounding off the Top five for Men's Pro. 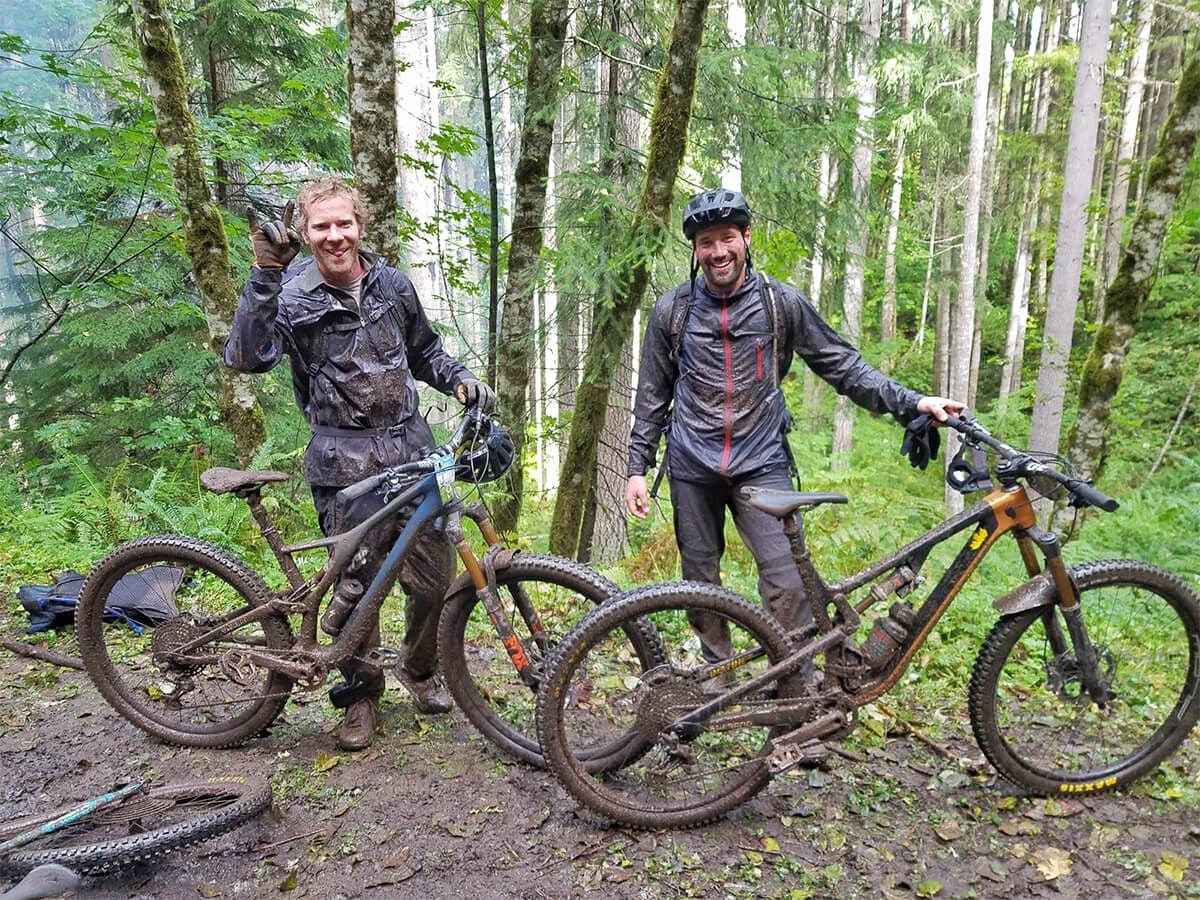 Matt Hunter and Thomas Vanderham all smiles after stage 1. 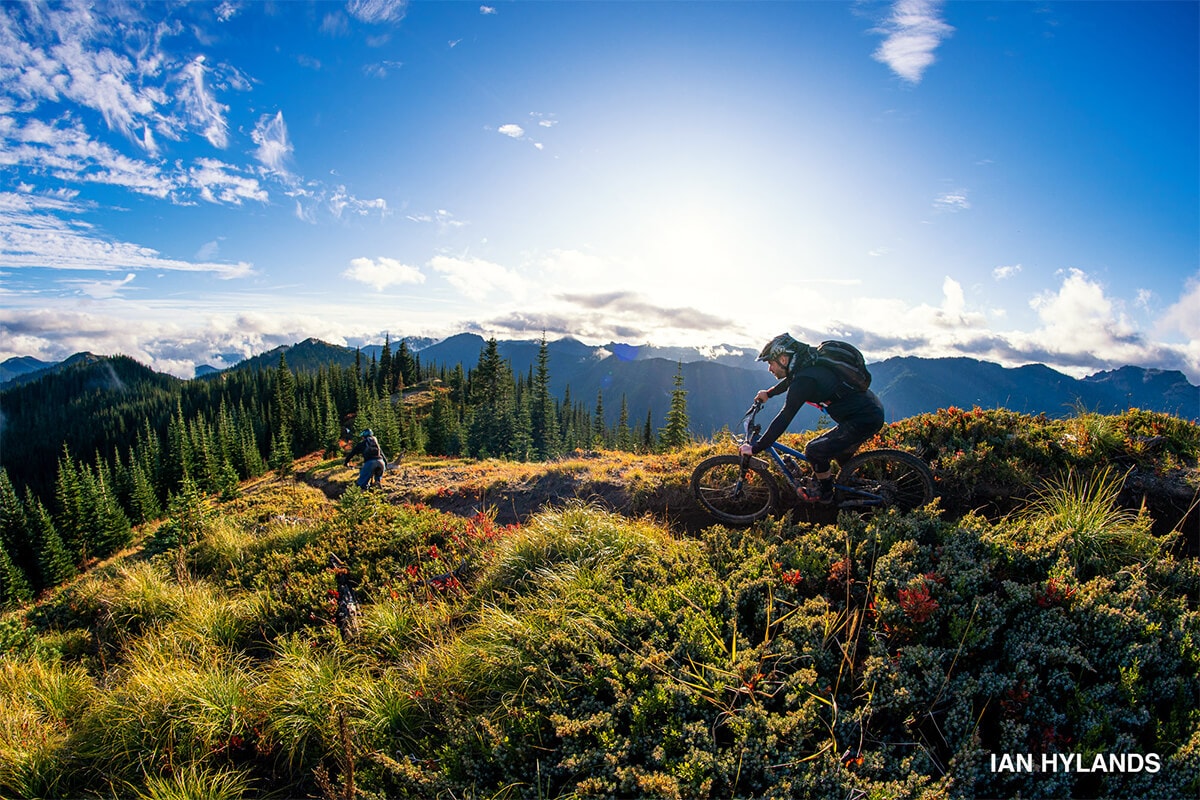 Day two of the Trans-Cascadia brought riders to Stage 5, 6, and 7. With cold weather and rain, racers were in for another incredible day of riding. Thankfully there was a short break in the rain, that gave athletes enough time to refuel. The rain wouldn't hold off for long, and would eventually turn to snow as riders hunkered down for the night. At the end of Day two, Chris Johnston found himself in second place with Geoff Kabush in third and Aaron Bradford holding down fifth place. 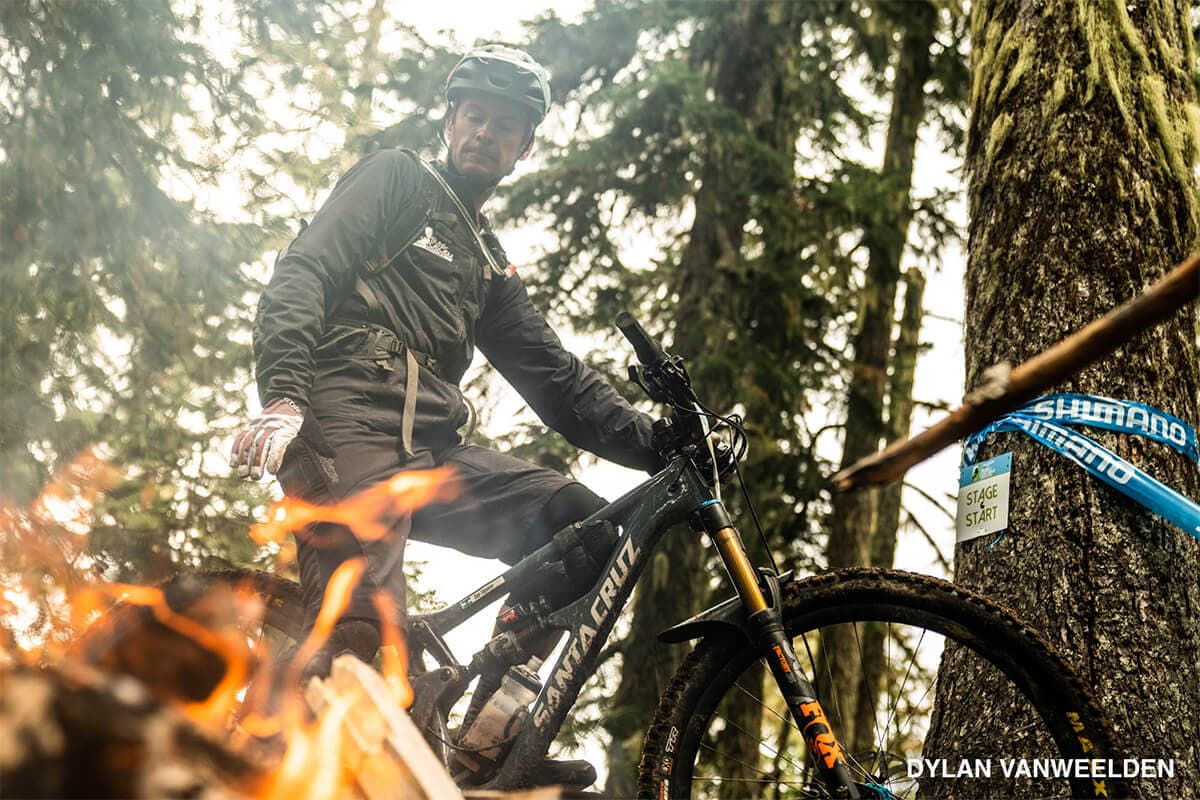 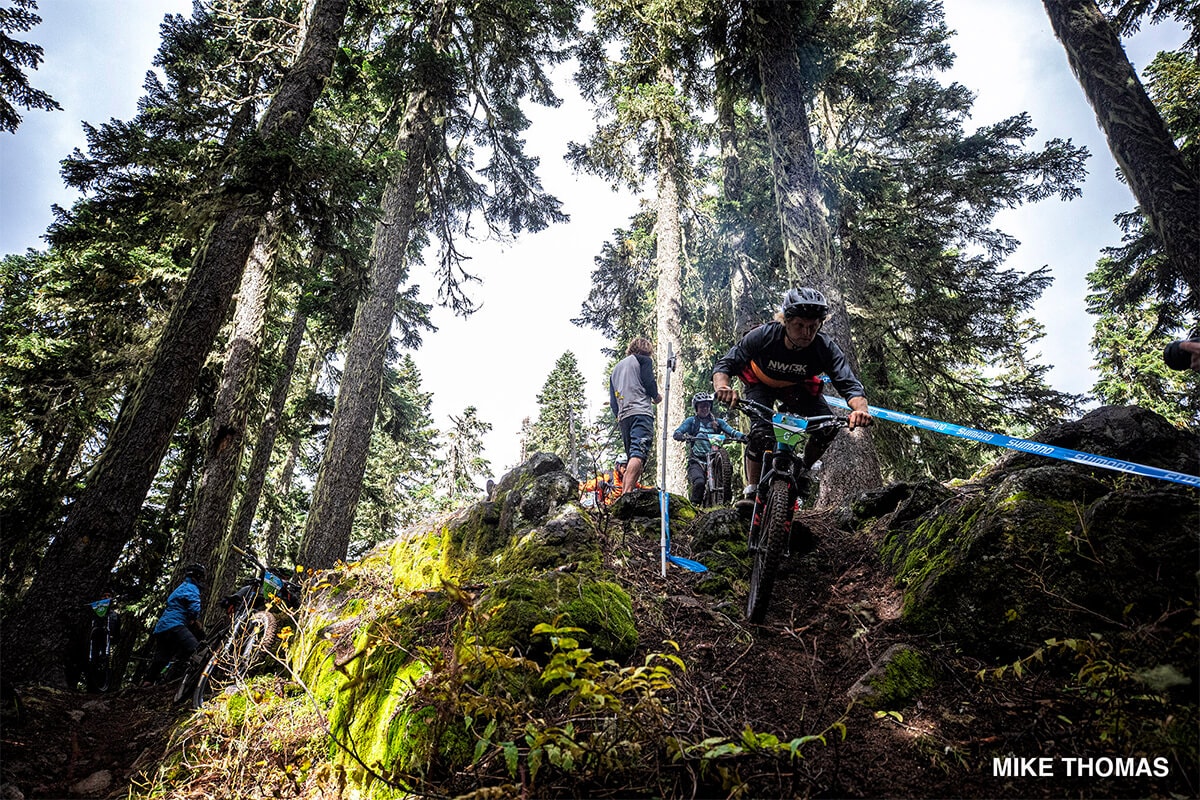 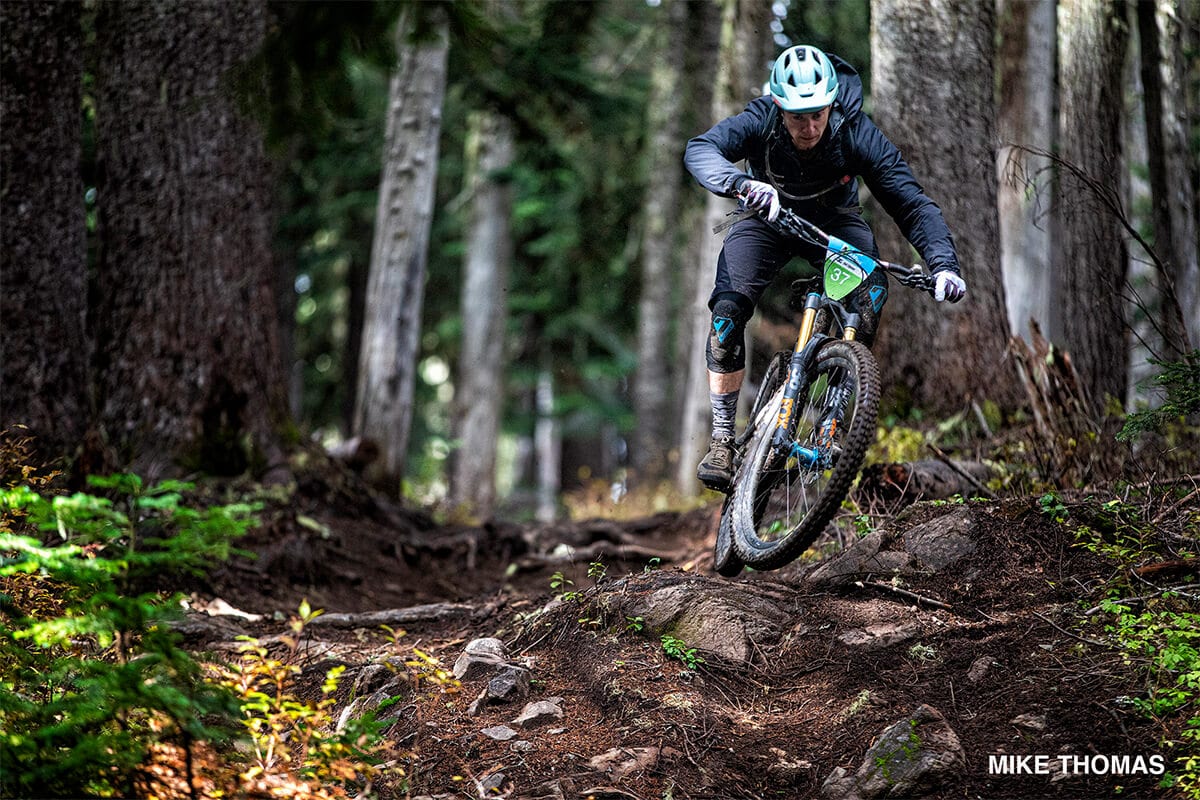 Day three of Trans-Cascadia started off with riders waking up to a fresh dusting of snow on the ground. The plan for the day was to move base camp from Takhlakh Lake to Green River Horse Camp. On top of moving camp riders would ride Stages 8, 9, 10, and 11. Each rider was given a trail map that marked each stage and gave a description of what that stage intailed. The description of Stage 10 was simply a drooling emjoi and exploding head emoji. This gave riders high hopes for what would turn out to be an epic stage. With a snowstorm building and conditions worsening, race producers were unfortunately forced to cancel Stage 11. At the end of Day three, Geoff Kabush had pushed his way into second place leaving Chris Johnston in third and Aaron Bradford holding down fifth. 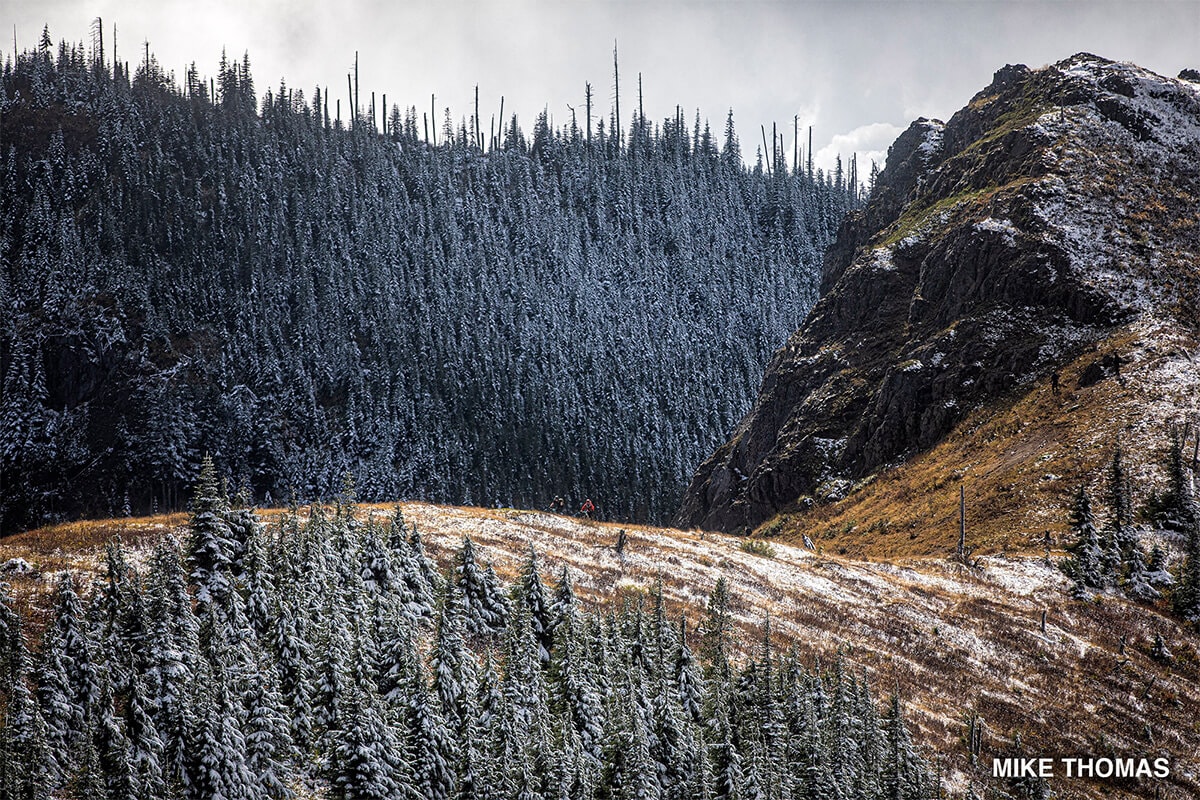 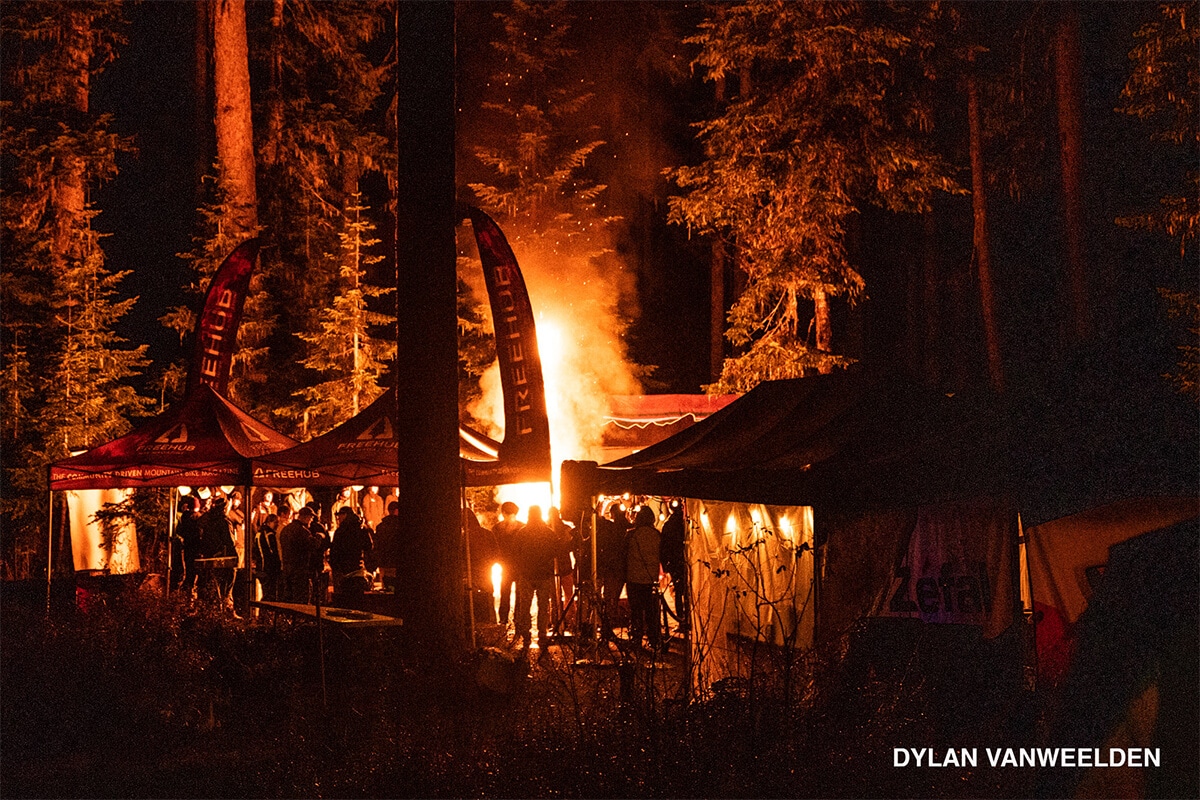 Day four of Trans-Cascadia started off with a fresh coat of snow on the ridgeline just above basecamp. Race organizers quickly came to the conclusion that the conditions were not suitable for safe racing and canceled the final day of the race. While organizers and safety personal felt it wasn't safe to race, they did feel that it was safe enough for a fun, casual group ride. In true Trans-Cascadia fashion event staff asked each rider joining on the group ride to bring a piece of fire wood and ride with them to the top of the snow-covered ridge. At the top of the ridge there was well over 100 pieces of wood and an epic bonfire where riders shared stories and celebrated another year of Trans-Cascadia. With the bonfire dwindling down, riders rode back down to camp with a small group of participants splitting off to clean up all the race tape and signs from the final stages. With the final day of racing canceled, the day three results stood with Geoff Kabush in second, Chris Johnston in third, and Aaron Bradford holding down fifth place. The 2019 Trans-Cascadia lived up to its reputation and was one for the books! 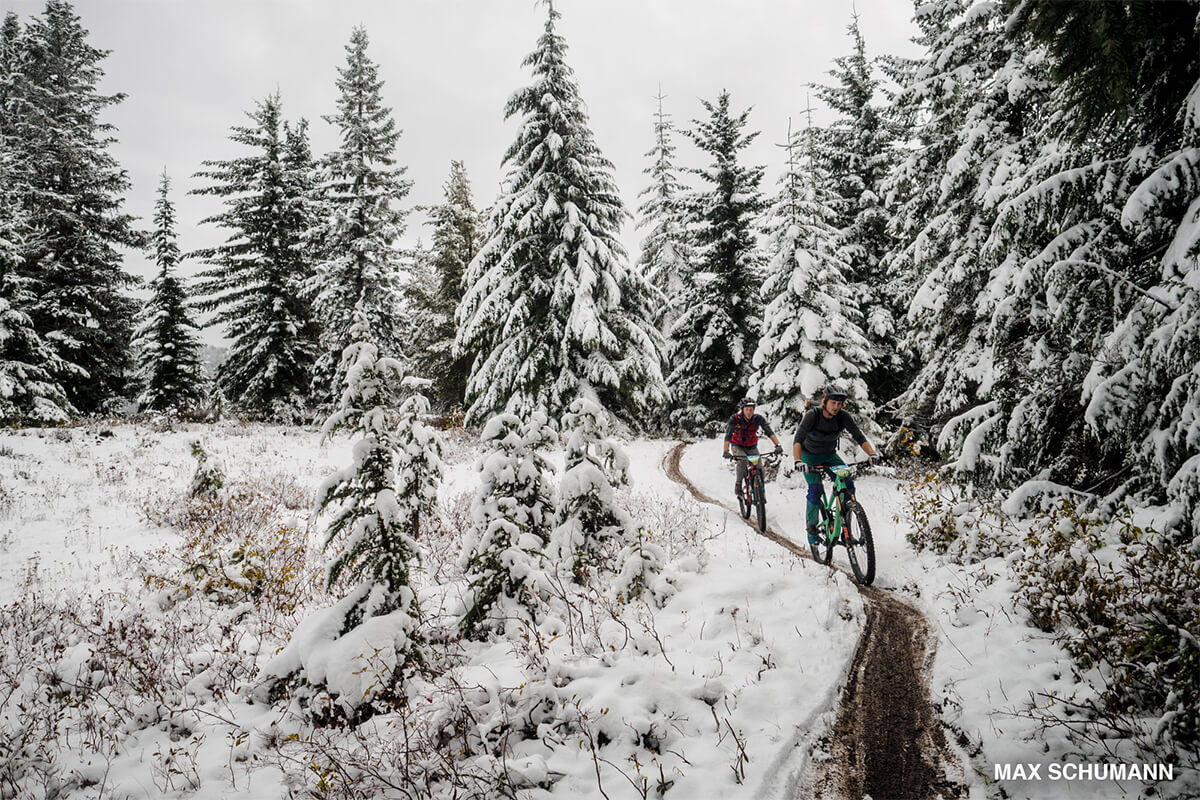 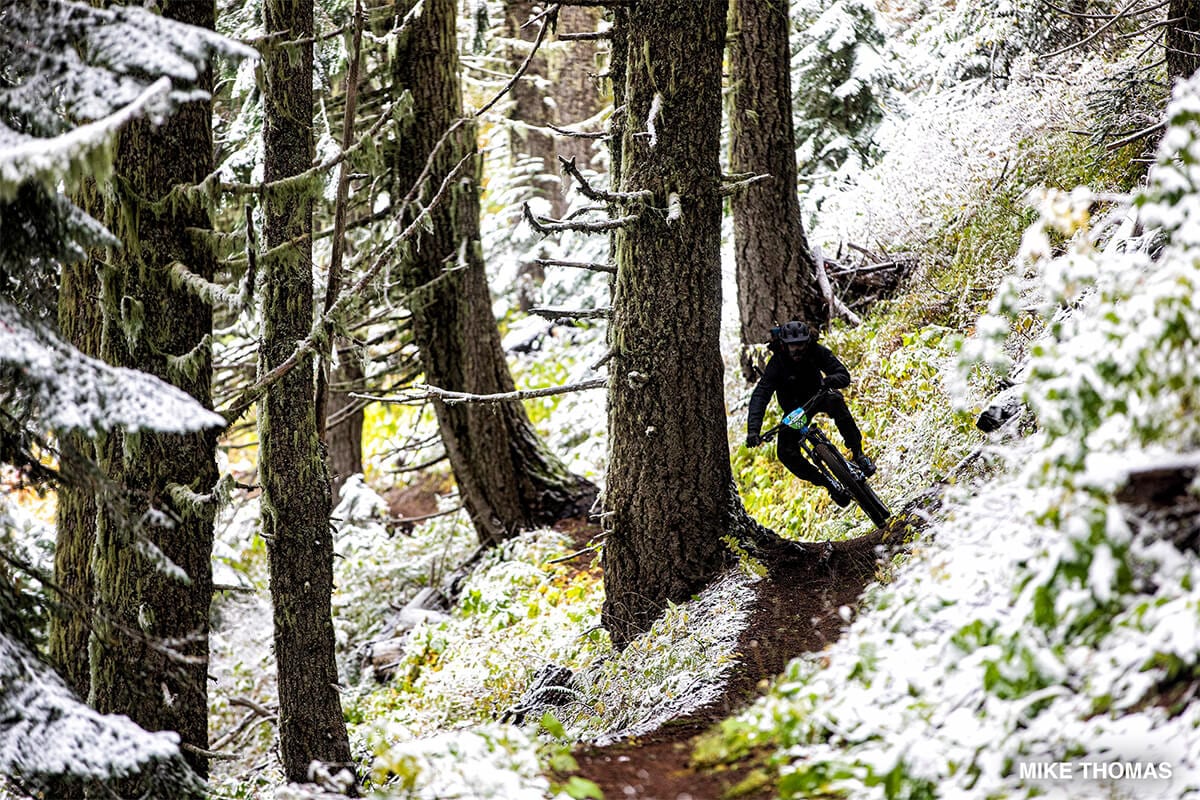