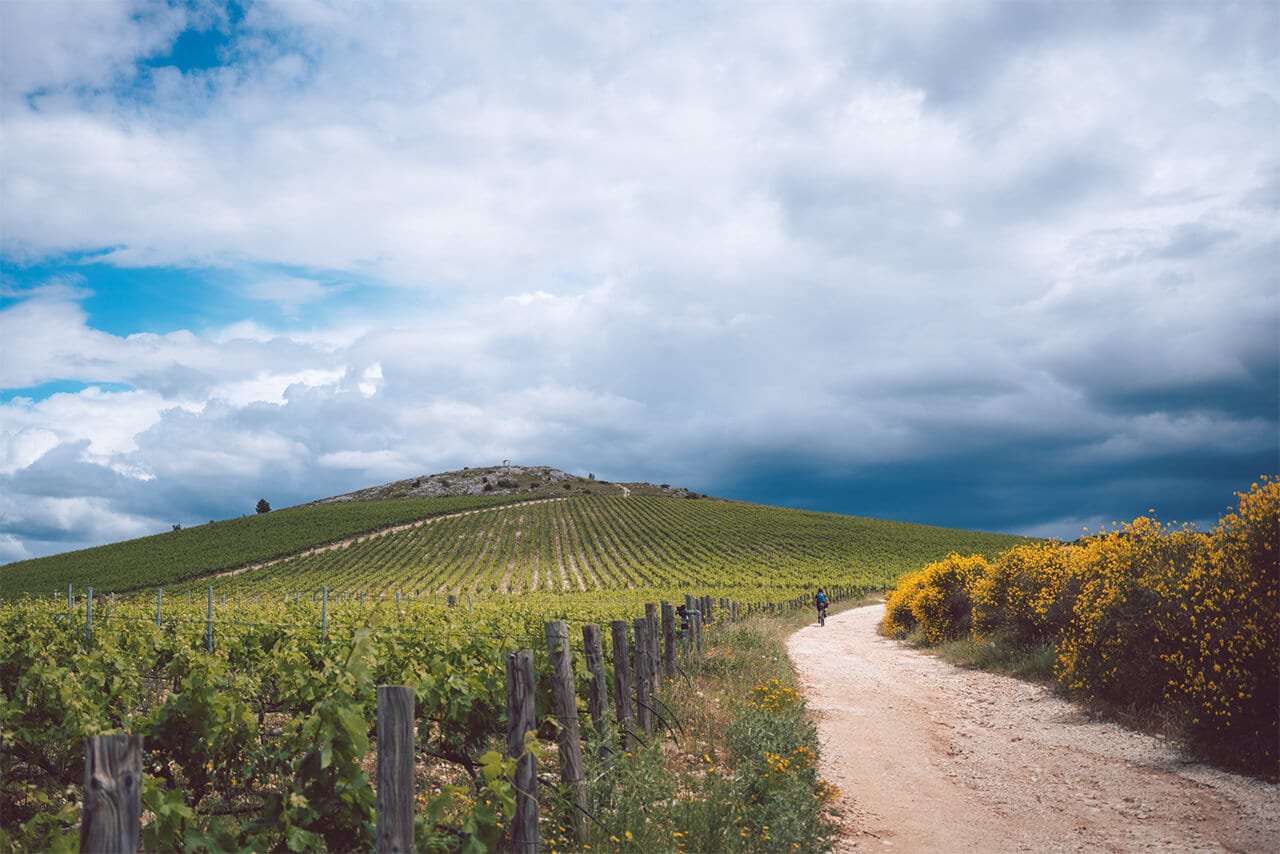 As we headed south the along the Adriatic Coast bikepacking route, we were thankful for drier weather and warmer temperatures. Skradin was one of our last stops before we'd make our final push to Trogir and it offered the first taste of tourism of any kind since leaving Smrika. Even though it was about the same size as Obrovac in population, the difference between the two towns economically was noticeable. More tourist traffic, hip guesthouses, and cafes along quaint pedestrian-only streets. And gelato, tons of the stuff. We could really feel and taste the Italian influence here.

Skradin sits closer to the coast and is the gateway to Krka National Park, an area with the second highest concentration of lavender in Europe, multiple waterfalls, and natural beauty. Skradin was a former fortress, home to monasteries and other religious buildings in the late 13th and early 14th centuries. Even Napolean had his little paws on this town as part of the French Empire. The swapping of power structures over the centuries has made Croatia one hell of a history lesson. The more I read about it the more confused I get.

The next day we rode through vineyards, orchards, country backroads, and popped out at Sibenik, the 3rd largest coastal city in Dalmatia and one of Croatia's four historical regions. Sibenik was built and founded by Croats, not the Roman Empire, making it unique from its neighboring cities. One of the best things about riding in Europe is the pedestrian-only streets and Sibenik is filled with them - narrow cobblestone walkways with century-old buildings towering on either side. It's surreal for us North Americans to imagine the feet, hooves, and wheels that made their way over these bumpy cobbled lanes for hundreds of years. Scores of restaurants line a walkway along the Adriatic with your pick of pizza, fresh fish, or what would become one of our personal favorites, Mangold (also known as swiss chard).  This night, we sat and ate pizza on a walkway overlooking the water.

Before leaving Sibenik the next day, Leslie and I hit up a local outdoor market for some fresh foods and local flavors. Almost every town has one of these markets and almost every day culinary and garden masters of all kinds set up kiosks to sell their local figs, fruit, veggies, nuts, meat, honey, bread, and cheese. It's the ultimate riding food; fresh and local. The southern part of our route offered up much rockier and arid terrain than the north. The lush forests were replaced by olive groves and vineyards. We climbed through a large vineyard and into what would be our longest and steepest hike-a-bike of the trip. We hiked through a tunnel of overgrown weeds, struggling uphill on foot for a solid 45 minutes. We finally made it out onto a rough, rocky road that led us to the highest point of the day amongst a row of windmills.

The views were amazing from this spot. There are over 1,000 islands off the Croatian coast - looking out towards the Adriatic you see hundreds dotted along the coastline and beyond. The sky was clear and the views were brilliant. After spending time taking it all in, we continued headed south towards Trogir. 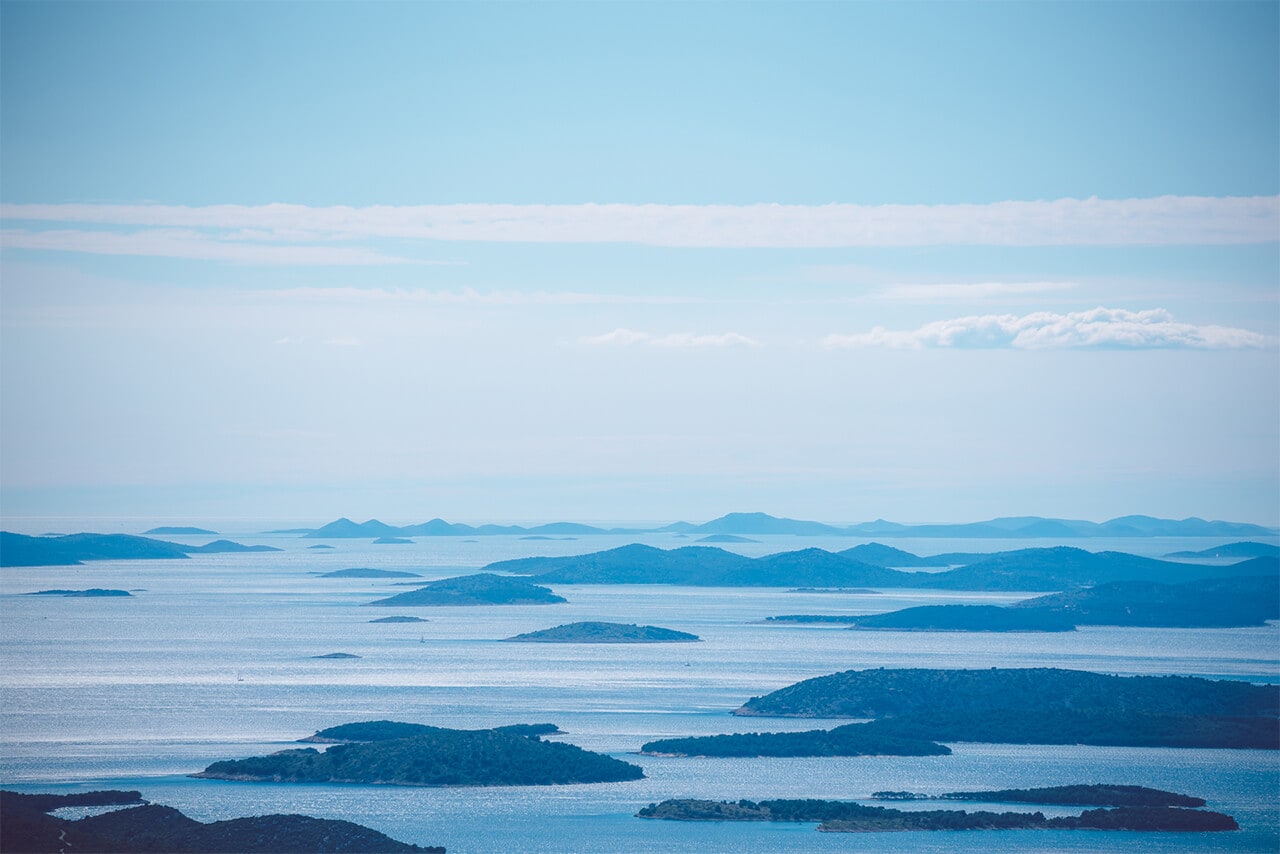 We dropped down into the valley and ripped down open gravel roads for the next 10 kilometers, losing elevation and getting closer to a tiny village we could see on the map. It was impossible to know if there were any stores but we'd find out when we got there.

The not knowing and the unexpected were two things I came to appreciate throughout this trip. It forced me to live in the moment without even trying. We spend so much time planning, preparing, and anticipating the future. It's important to come prepared and pack appropriately, but once you arrive at the starting point, the path ahead has tons of variables, many of which are out of your control. 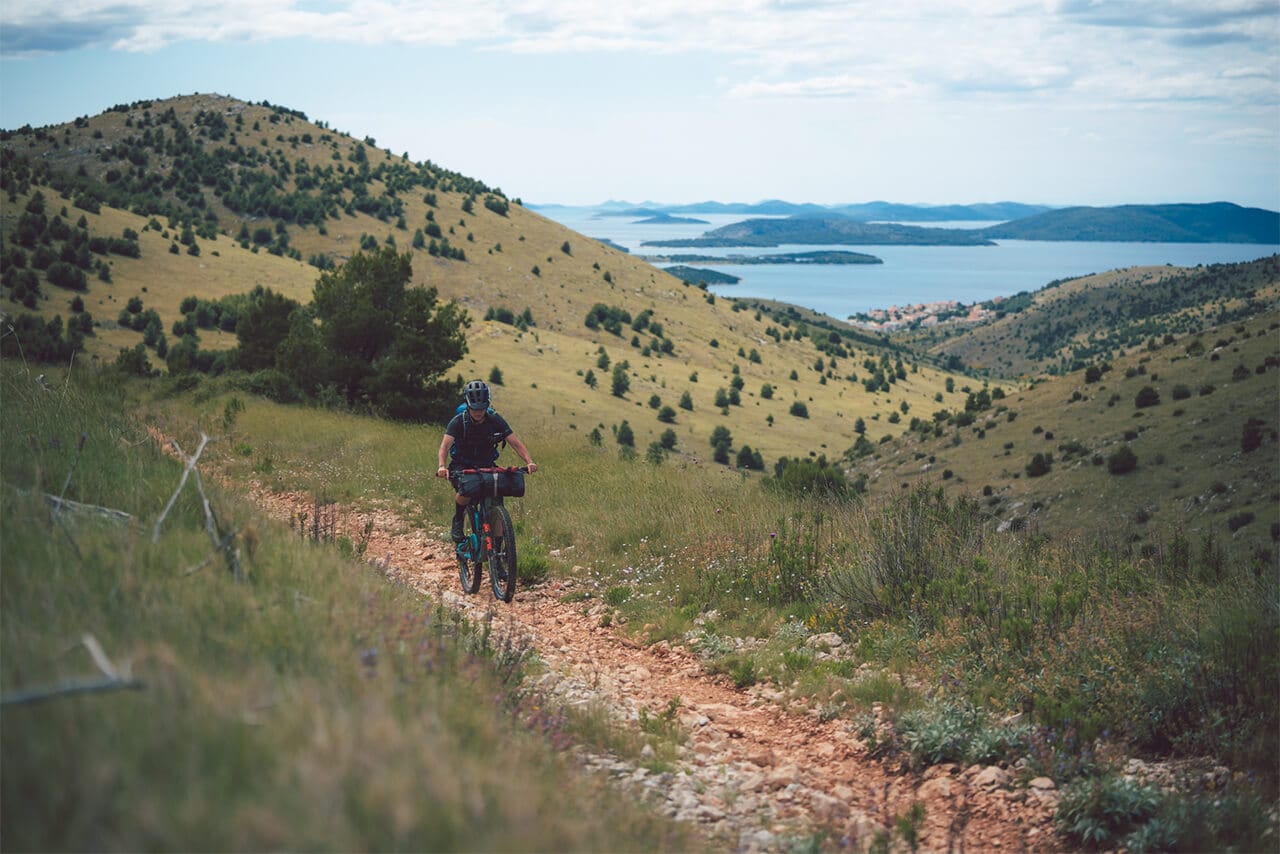 When we arrived in the small village that we saw on the map, Blizna Gornja, it was like stepping back a hundred years in time. The modernization of Sibenik compared to this town was unbelievable. We rode around the steep empty streets and finally came across an older woman outside a barn. We made the water drinking motion and she instantly invited us into her very modest home. The kitchen consisted of a few basins for sinks and a water spigot in the wall nearby. We were so grateful for this kind gesture.

As the woman's husband came out from another room, all smiles, I reflected on how it's often the people who have the least to share that are the quickest to give. It was a constant theme on this trip. The simplest things like water, food, a smile, and a place to sleep are some of the best exchanges between humans. Everyone has a least one of these things they can share, no matter what their state of wealth. We wrapped up our trip the next day and rolled into Trogir around noon. These trips always end too soon - just as you're getting used to the simplistic way of life that traveling by bike provides, it's over. 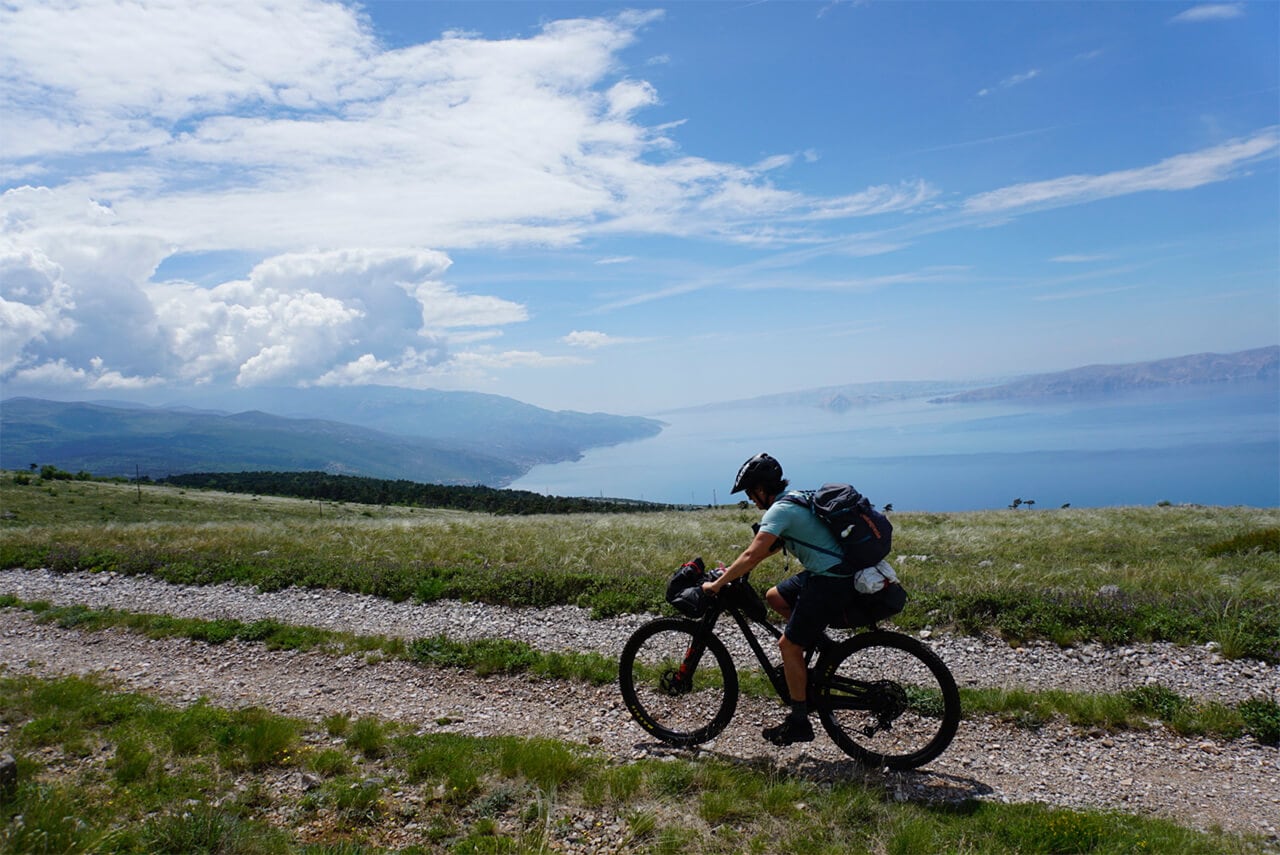 I can't recommend visiting the country of Croatia enough. We only explored a tiny portion of the beautiful place and it has so much potential beyond our route. For every turn we took, there was another road in the opposite direction headed towards another city or town rich with history, culture, and natural beauty. I'd love to get back to this lesser-known part of Europe again. There's so much more to see, and there's truly no better way to see it than from the seat of a bike. Thanks again to my easy-going travel partner, Leslie Kehmeier. Something always goes sideways on these trips, no matter how much you prepare, and having an accomplished bike rider and explorer to adventure with makes the experience memorable and brings you closer together. Teamwork makes the team work! Živjeli 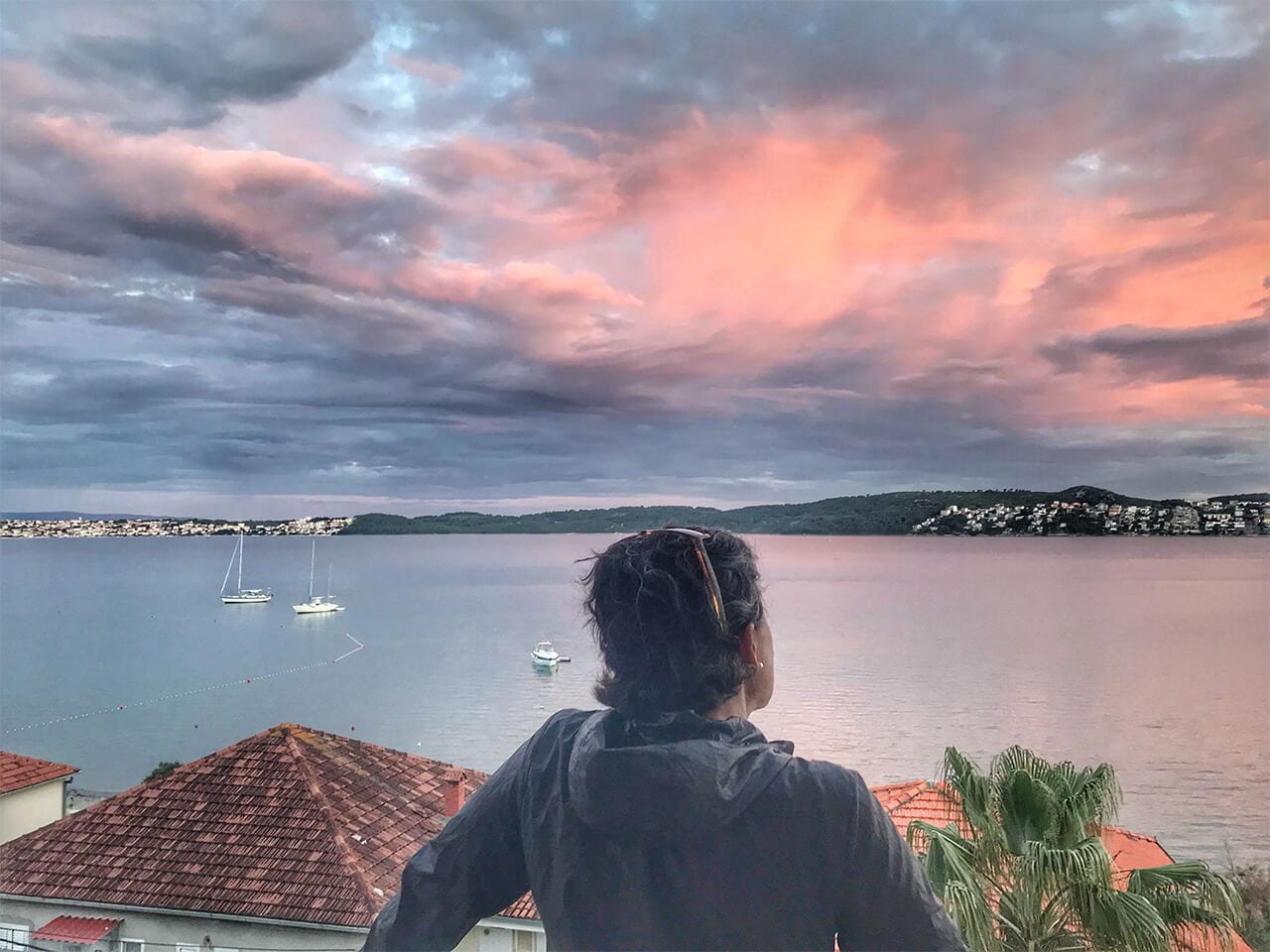