I’ve been fortunate to experience about a dozen iterations of Shimano DEORE XT since I started riding mountain bikes in 1987. The first shifting system I used from Shimano was the DEORE XT M730 series top mount friction shifters. Then, in 1990 Shimano released its first-ever SPD shoe and pedal system for mountain bike. It was a huge deal at the time and a major departure from the primitive toe clip. I raced with this system at the inaugural UCI 1990 World Mountain Bike Championships in Durango, Colorado in both cross country and downhill and this development went far beyond the tired words of ‘game-changing’ – it was more along the lines of ‘life-changing’ for the mountain bike enthusiast and racer of the time. 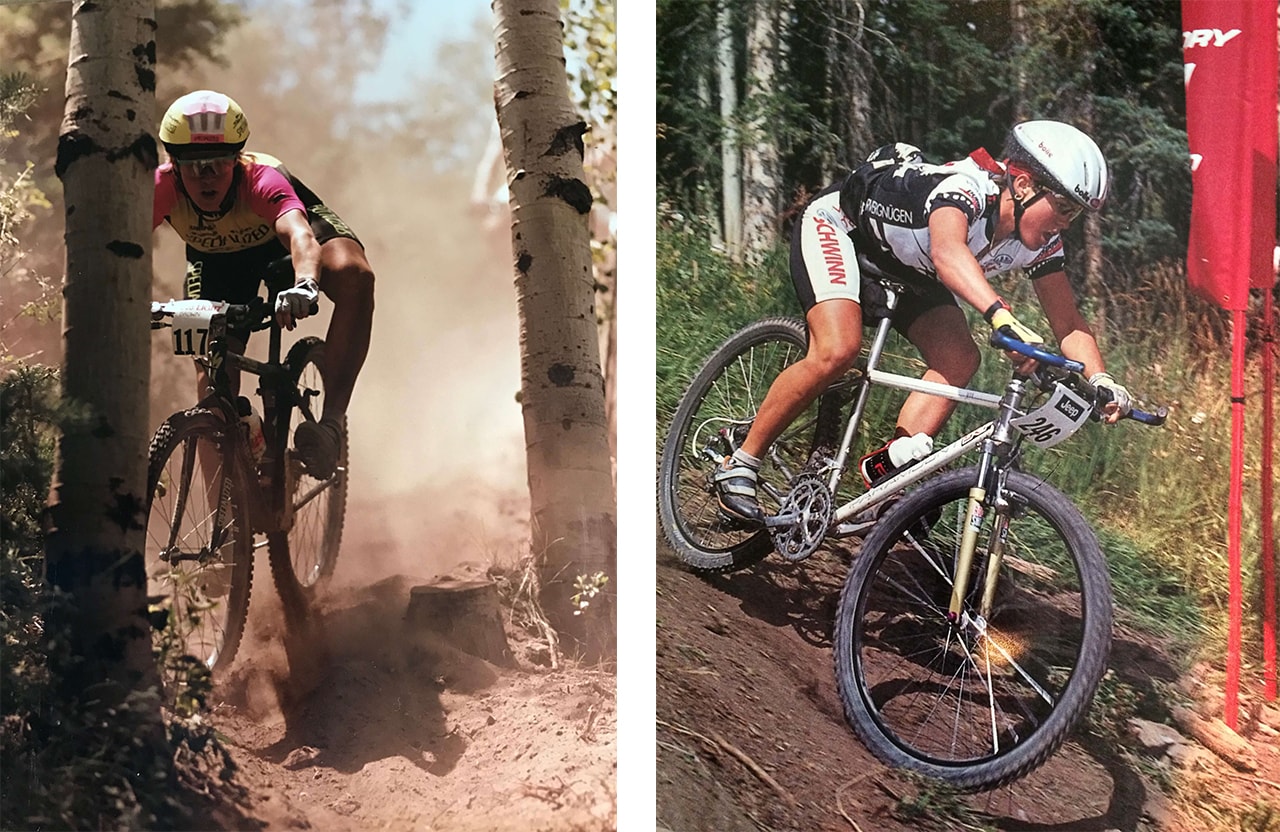 Old news I know, and a long time ago compared to the technology of today…but the cool thing is I’ve been able to experience, over the decades, the changes and advancements in the XT group that have brought it to today’s version, the M8100 12-spd system, released just over a month ago. 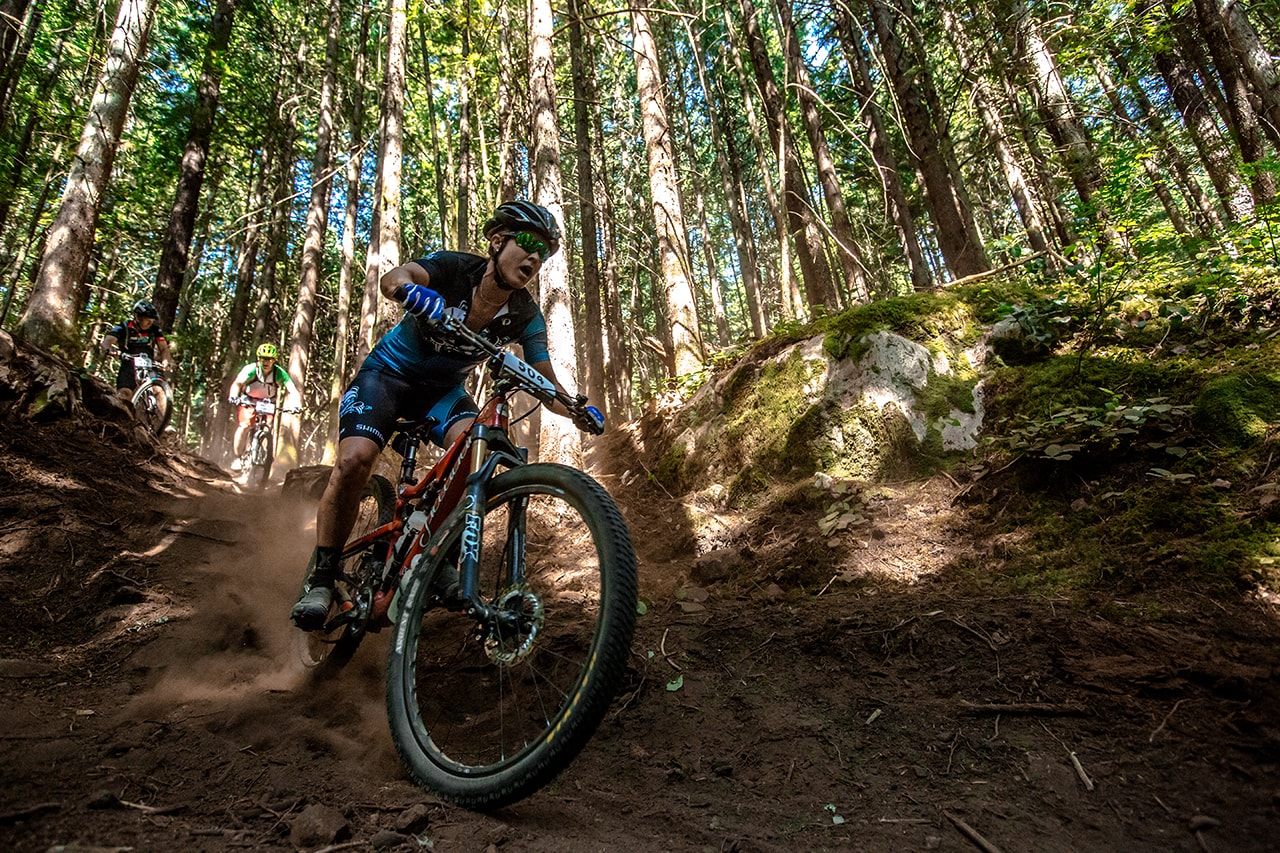 Over the years, I’ve been close to the processes and evolution of each generation of this workhorse group known as DEORE XT. Some of these advancements were incremental, others were monumental. Technology like disc brakes, RAPIDFIRE, HOLLOWTECH II, ICE TECH rotors, HYPERDRIVE, I-SPEC and SHADOW PLUS, to name a few, are innovations that mountain bikers have heard over the years from Shimano. Behind the words and the actual components are a very long road of evolution, real-world testing, and continuous improvement.

I was fortunate to have one solid month of riding on the new XT before it was publicly released on May 30th of this year. For 3 weeks straight, Leslie Kehmeier and I rode in the mountainous terrain of Croatia, sometimes steep and rocky, other times fast and flowy. First on a 200+ km self-supported off-road bike packing trip from north to south along the Adriatic Crest Trail, and then another 8 days riding several islands off the coast of Split. We rode mainly on unmaintained hiking trails and double tracks with steep ledges, drops and undulating terrain that the locals refer to as ‘Croatian flat’. Compared to my home trails in North Vancouver, BC it was a radical departure from my normal. I prefer radical departures for equipment testing – you never know what’s around the next corner and the spontaneity of shifting, braking and pedaling in unknown terrain always challenges the performance of a product. 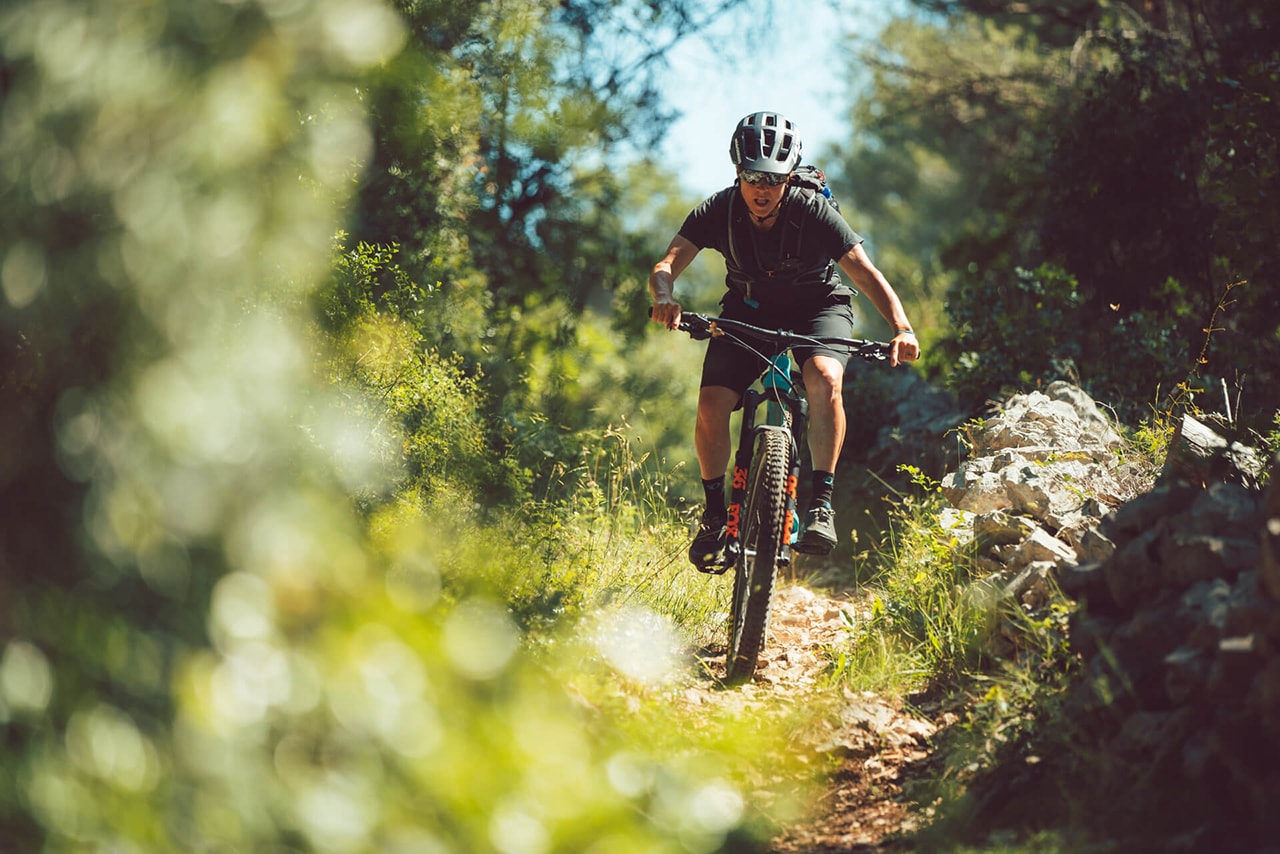 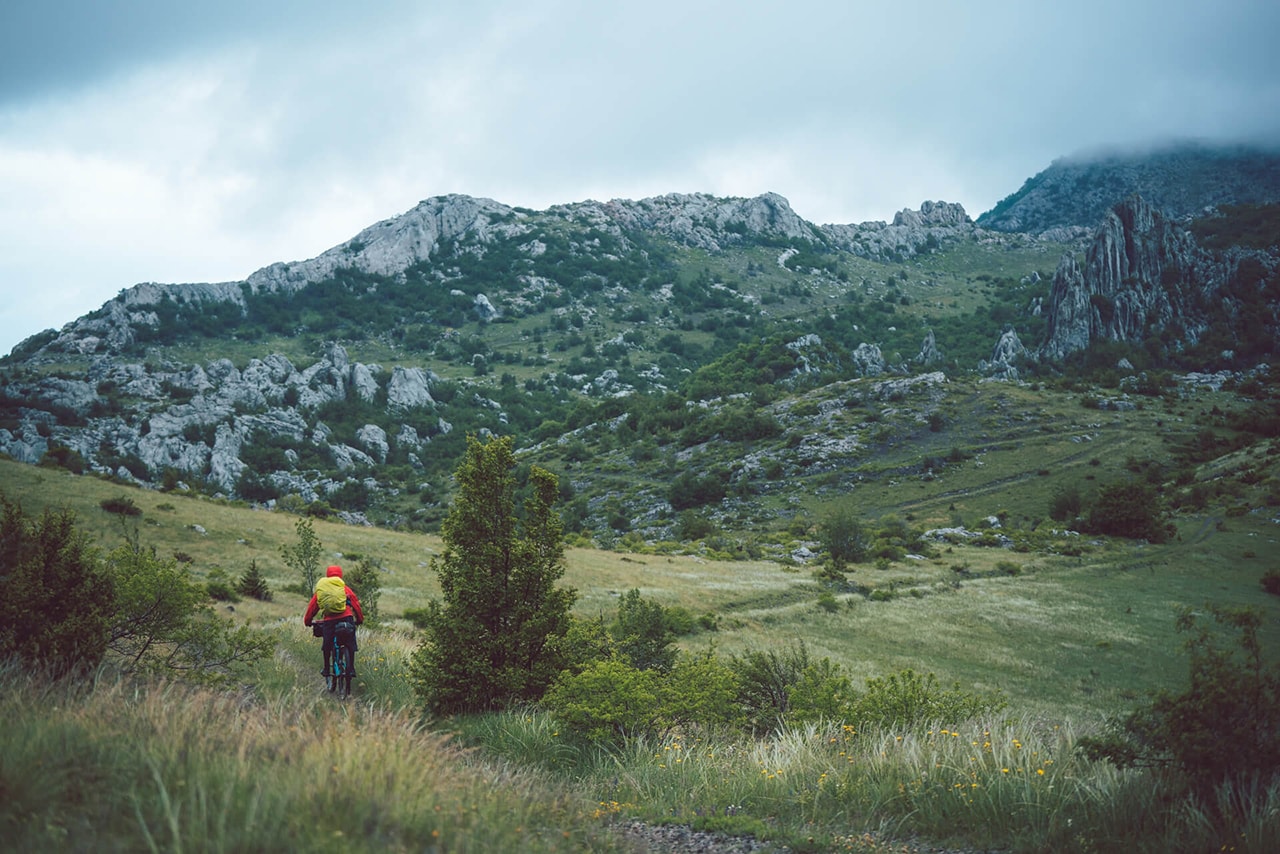 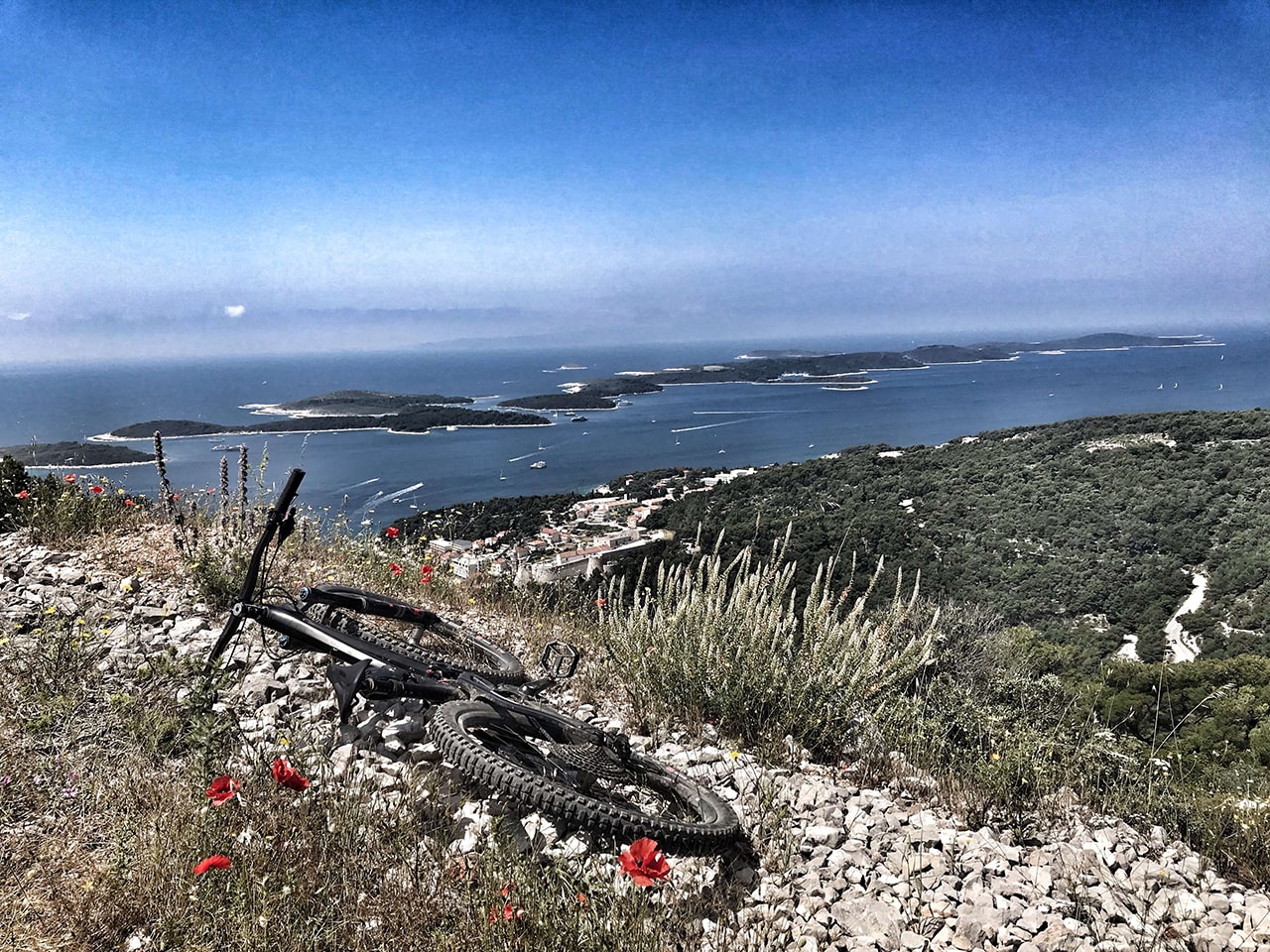 In my opinion and from my experience riding this group over the past several weeks, M8100 12-spd is loaded with monumental changes. First and foremost is the introduction of another gear in the form of a 12-spd system. I ran a 32t single ring up front with the 10-51t 12-spd cassette in the rear. I spent a good amount of time in my 45 and 51 cogs climbing the steeps and appreciated the 10t for the fast double-tracks and gravel roads. Shifting under load is unbelievably smooth with this group thanks to the new HYPERGLIDE+ technology. The range of the rear cassette is wide but the action is quick and quiet even in the most abrupt terrain where sudden shifts are essential to maintaining rhythm. I’m a 4-piston brake caliper kind of gal, and I’m a huge fan of SERVO WAVE, which is a mechanism in the lever that essentially gives you faster and more powerful pad contact with less effort. As someone with small hands and short fingers, I’ve always appreciated the ability to easily squeeze a Shimano brake lever with just my index finger, leaving the other 3 to hang onto the bar, especially on long descents and rough terrain. The new brake lever also has a more inboard clamp position with an extra point of contact between the bar and the lever – this added a noticeable improvement in braking power and stability.

I’ve long been a proponent of Shimano’s ICE TECH FREEZA rotor technology and remember well when it first hit the market. Living in the land of 5,000-foot descents and some of the world’s best bike parks, this technology was well received in BC. Now, for the first time, FREEZA has hit the XT level. And while some of the key elements of this technology are not visible to the naked eye, the results can easily be felt on long, steep descents. The rotor itself is a 3-layer sandwich; a middle layer of aluminum encased by 2 pieces of steel. The aluminum helps dissipate heat as does the actual finned structural design of the rotor. Too much heat causes problems - most noticeably brake fade which means the lever pumps up and is harder to pull - giving you less power when you need it most. There’s also an aluminum fin on the brake pad itself which helps cool the system, adding precious life to your pads (and your forearms). The most recent I-SPEC EV integration is clean and tight and made running my dropper post and shift lever on the same clamp band as my brake levers simple and easy while also freeing up valuable bar space. I-SPEC EV offers a wider adjustment range so I could slide and rotate the shifter to exactly where my hand needed and made the operation of controls super intuitive. The new textured rubberized pads on the shift lever are easy to locate when your eyes are where they should be…on the trail. They were also more grippy in wet conditions so I could reliably shift in all types of weather. I love having the option to downshift with my index finger or thumb my way to bigger gearing with the same lever. I usually prefer the index finger downshift though, as it gives me a more stable grip on the bar when I’m shifting to a harder gear in rough conditions. Also, my thumbs have been abused over the years doing different sports so I like the more ergonomic shifting position that RAPIDFIRE PLUS provides. 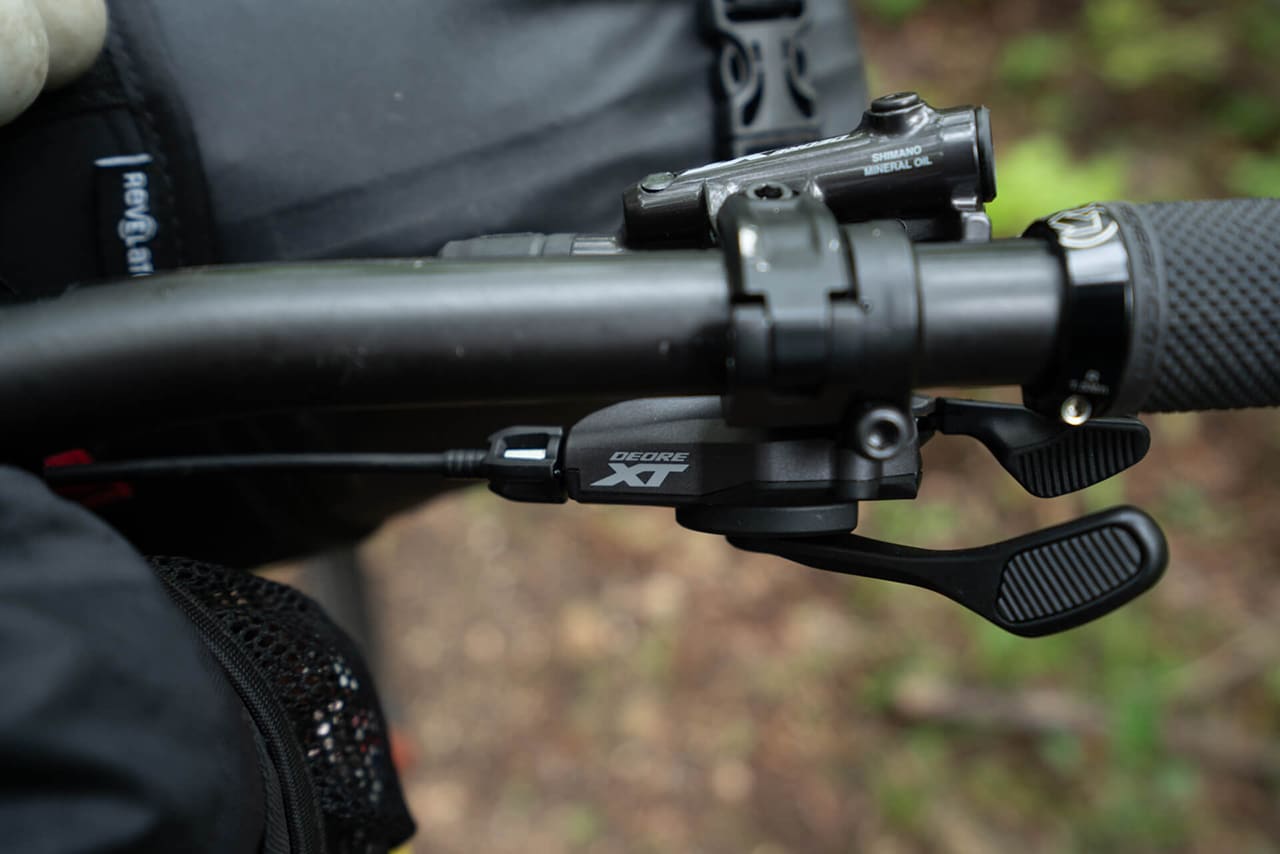 Croatia had loads of loose and rocky terrain, mostly limestone. I like using the term ‘down-country’ to describe the place even though you’re on a downward trajectory, you’re still climbing punchy uphills in between the steep prolonged descents. Never once did I drop a chain or mis-shift, even under load. There’s a term Shimano uses for its component groups called ‘Systems Engineering’ and the definition lies in the orchestra of events that happen when the teeth of the cassette seamlessly work with the plates on the chain, with the pulley wheels of the rear derailleur in concert with the front chainring…each component from a given group is tested and designed to work together. The integration of the drivetrain is quite possibly the best example of this ‘Systems Engineering’ concept. Details like an extended inner link on the new XT chain is probably something most of us would never notice, but it’s worth mentioning because it adds so much to the quality of the shifting, the retention of the chain on the chainring and the quietness and longevity of the drivetrain overall. 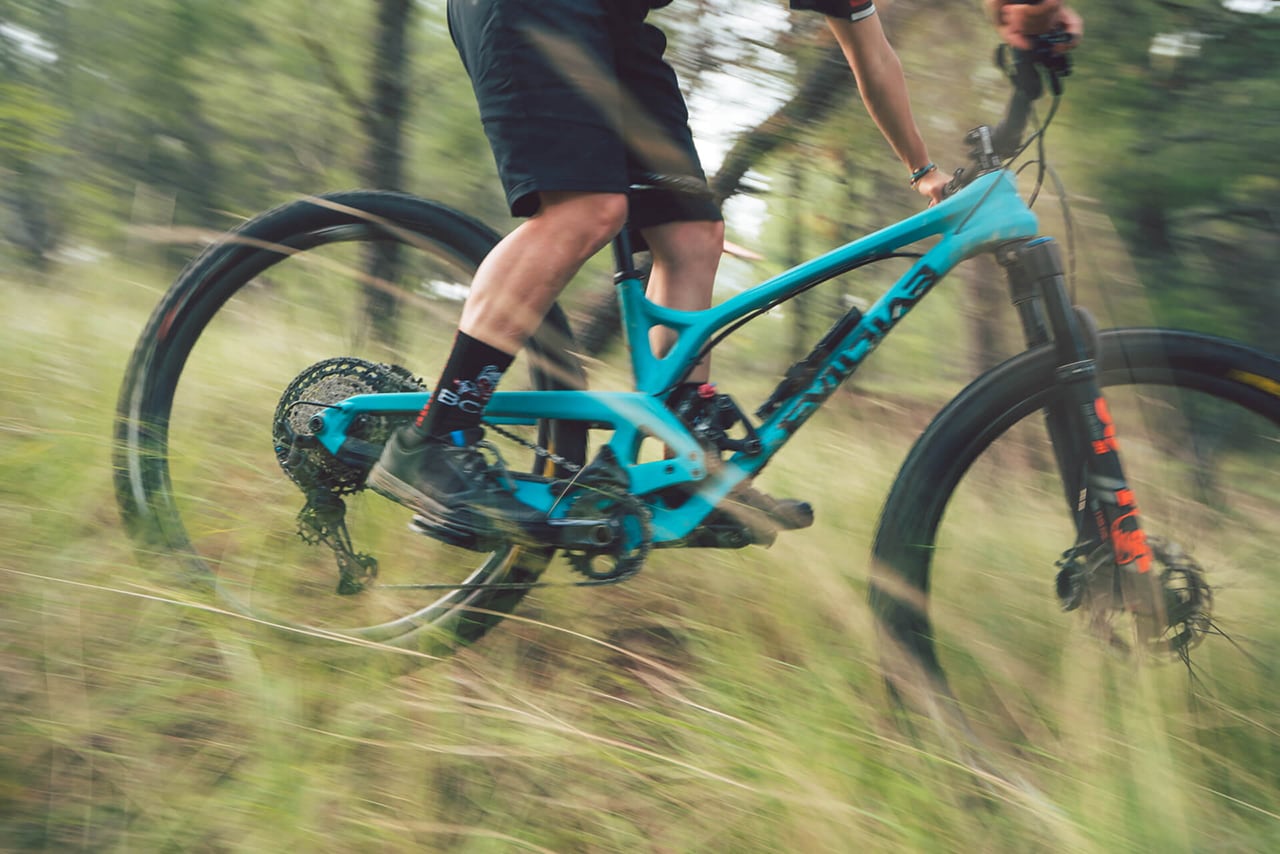 I occasionally clip into SPD pedals, but these days I mostly use flats and I used them for the entire time while riding in Croatia. Living in a wet, rooty environment like coastal British Columbia I find I’m more comfortable and confident running flat pedals. I try trickier lines and ride steeper terrain knowing I can jump off the bike or dab my foot within a fraction of a second. DEORE XT flat pedals come in two sizes with different widths to suit different shoe sizes. However, despite having little hooves, size 39, I prefer the larger of the two pedal platforms. The bigger surface suits my riding style so I’ve gone with what works for me. The concave shape of the pedal holds my foot firmly in place and with ten 5mm pins on both sides of the platform, it almost feels like I’m clipped in. I wore the Shimano GR7 flat shoes with a Michelin outsole that is specifically designed to work with the shape of the pedal and pin placement. This is another Systems Engineering interface and one of the most important connections of rider to bike.

Trails, mountain bikes and how we ride has changed dramatically over the decades. It’s all been an evolution of sorts, and for the better as far as my experience goes. Thanks to Shimano, to their engineers, to the riders, racers, frame makers, trail builders and bike shops around the world that have all in some way contributed to this latest version of a legacy product called Shimano DEORE XT. 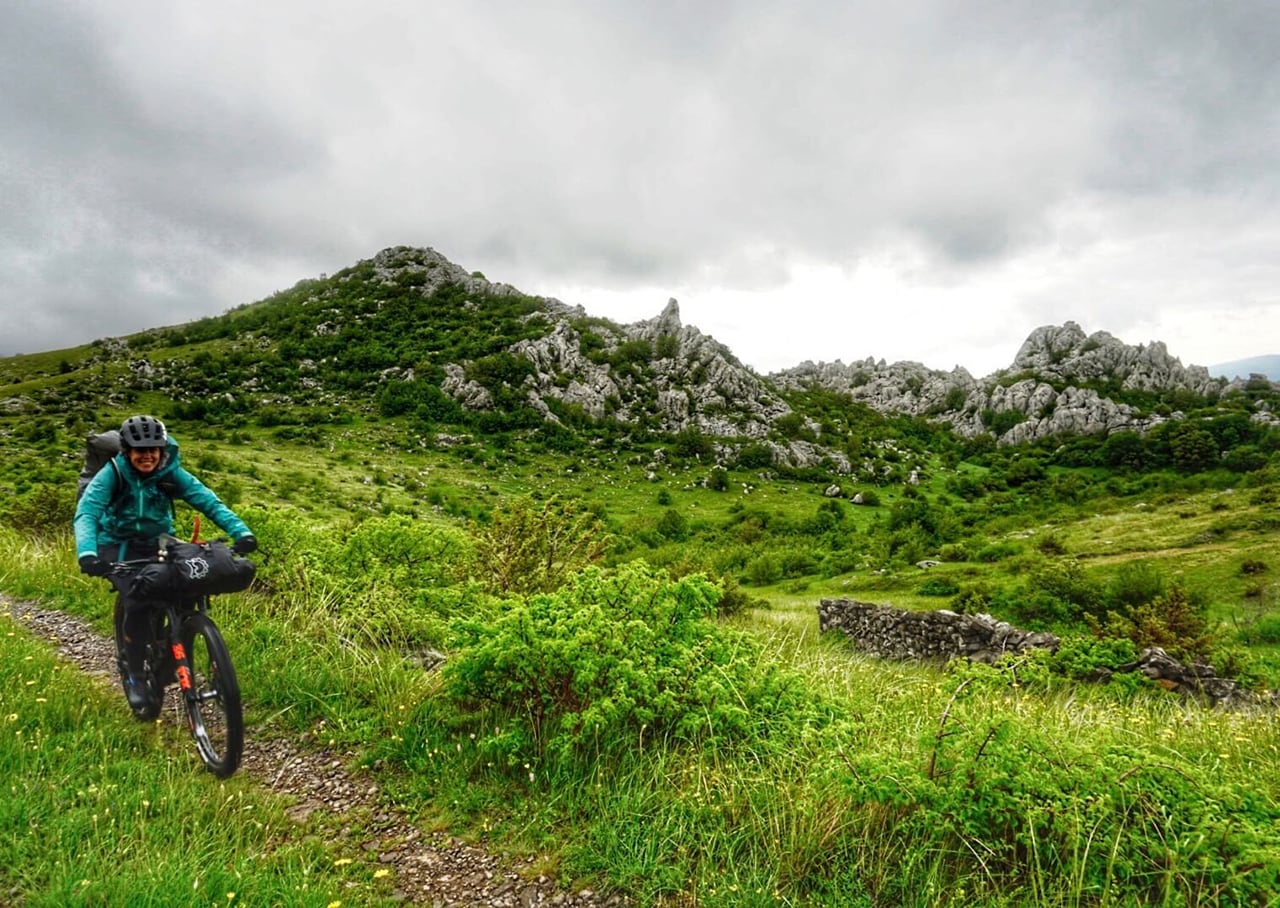 * I was aboard a 140mm Evil Offering 29’er with a Fox DPX2 shock in the rear and a Fox 36 Performance Elite FIT GRIP2 up front set at 160mm. My cockpit consisted of PRO Tharsis carbon bars combined with a 35mm PRO Tharsis trail stem. Hubs were laced up on We Are One Composite Union carbon rims with Maxxis Minions; 2.5’s up front, 2.4’s in the rear. I weigh 128 lbs and run 18 psi front and rear on this tubeless set up.